Benjamin turned five at the beginning of June and with Andrew scrambling to finish his dissertation and the end of the school year and everything else, it was just kind of a crazy time for us to try to throw a party for him...so we didn't. We celebrated as a family at the pool but we didn't do anything with friends because I wanted to choose a date when Andrew would be around to help.

Time kept slipping by and all of a sudden we we're moving in six days and Rachel's birthday is tomorrow...so we picked today!

The girls pointed out that this would be when his birthday party would have been held had he had the decency to wait until his due date. Rachel very graciously and maturely has been allowing him to be the center of attention today (even though it's her birthday-eve), though she did breathe a sigh of relief when I came out of my bedroom with a pile of freshly wrapped birthday presents labeled "To Rachel."

We, uh, didn't get anything for Benjamin this time around because we gave him presents on his actual birthday. This was hard for him to process. He though we should do the whole thing over again from start to finish. He wanted birthday cereal and presents and a cake.

"No, no," I said. "We did cake and presents and cereal on your birthday, remember?"

"That was when I turned five," he pointed out.

"Right," I said. "And this is your five-year-old party. But it's just a party, not your birthday..."

"But how come Rachel gets to choose birthday cereal?"

"Because it really is Rachel's birthday."

"But she doesn't get a party?"

She's not even getting cake tomorrow. (I told you she was being gracious and mature!)


I was going to make her a cake (she wants a musical-themed cake: Wicked and Annie and Les Mis and so forth) but the very idea of making a cake right now is enough to make me want to cry. I asked her if it would be alright if she got to choose a different birthday treat (like a trip to Pelican's or something) and we do a little family party for her in Utah. I'm sure we'll be having people over to say hello soon after we arrive and then we will have more people to help us eat the cake and I can rationalize taking a day off from unpacking in order to make a cake...but I can't really rationalize taking a day off from packing. Not at this point.

She thought that was a fine idea and asked if she could invite some friends over to play games—not as a party that I'd have to plan but just to have friends over—and I said to go for it. So those are her birthday plans.

Benjamin asked for a pool party this year. In my mind I was going to go all cute and serve blue jello instead of cake, but then Benjamin started talking about peach pie. For whatever reason, his heart was set on having peach pie and pizza at his pool party with his pals, so that's what we went with. He was a little sad that I didn't make a peach pie for him. Instead we had Andrew pick one up on his way home from campus, where he has been diligently making changes to his dissertation before his defence (I thought we'd have a few weeks together to relax and furiously pack after he turned it in, but I was wrong; there has been no relaxing—I am furiously packing and he is still working on his dissertation).

The idea of taking 7.5 children swimming was a little daunting, so I asked Andrew to meet us at the pool by 3:30 so that he could help out with all the little ones. That was our plan, but you know how plans go.

Andrew left campus a little late, got stuck in weird traffic, finally made it to Little Caesar's only to find that it was closed for renovations! The next-nearest location is about twenty minutes away, but I told Andrew to go ahead and head over there because—how else were we going to feed all these kids?! Andrew got to the alternate location and asked for three pizzas and they got all huffy with him because apparently if you want more than two hot'n'ready pizzas you're supposed to call ahead to order. So they made him wait.

Then they told Andrew he could have some pizza. But they only had pepperoni pizza left.

He took them anyway and finally made it to the pool with pizza and pie at 5:00, just in time for dinner.

Swimming with seven children wasn't as bad as I had anticipated because we had the pool to ourselves, so I didn't have to worry about losing track of kids or having them be jostled by bigger kids or anything. And Rachel and Miriam were so very helpful—escorting children to the bathroom, splitting up supervision duties when kids couldn't agree on which end of the pool to be at, and helping the kids get excited about pool games like 'What time is it Mr. Shark?' and 'Fishy in the basket.'

If the pool had been busy and if I hadn't had my big girls with me, I might not have survived the afternoon, but all in all it wasn't so bad.

The kids were very ready for the food when it arrived. 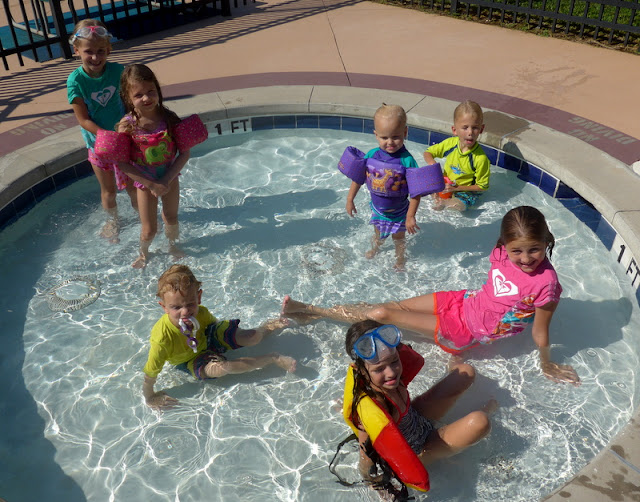 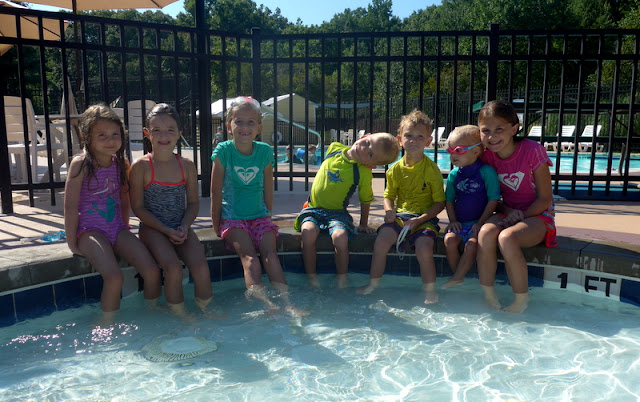 Sadly, one of the moms misread the invitation and showed up to collect a couple kids at 5:00 instead of 6:00 so we rushed through dinner and presents so the friends could go. Later she reread the invitation and felt bad that she'd dragged the bulk of the party away, but it turned out just fine. The kids she took had been satisfied with the swimming time they got and the one who was left behind was happy for the extra play time. She told me it was "the funnest, happiest day of her life" when she left.

Our friend Ade also dropped by, which the kids were rather excited about. They love Ade! She brought a box of things to keep them occupied on the trip and helped toss them all into the pool over and over and over again. It was so nice to get to visit with her one last time before we leave! 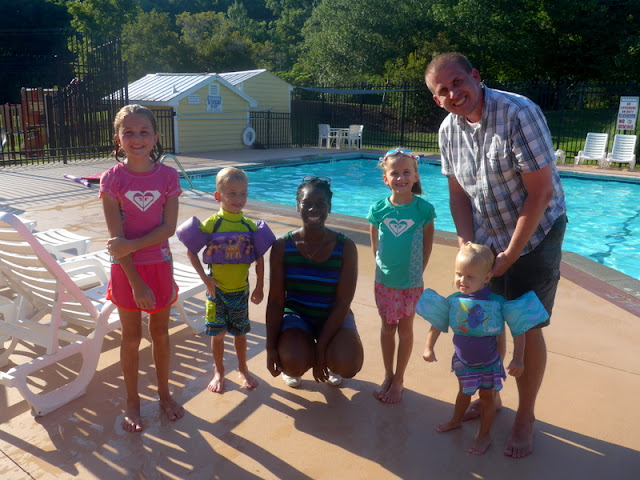 (Even after spending hours at the pool my kids still didn't fall asleep until 10:00 (who am I kidding? I think three of them are still awake but at least they're all in bed and quiet). I can hardly believe it because they were swimming hard for hours.)

Oh, Benjamin got a little set of motorcycles from his little friend R. He was so excited to open them and she exclaimed, "They're motorcycles! Just like your dad's!"

Our neighbour, Mr. Lee, gave Benjamin a little white scooter a while back—that really is just like his dad's—so I think these motorcycles will probably remind him more of Mr. Lee, who has actual motorcycles (not dinky scooters). But it was cute that Andrew's scooter made such an impression on R.

Ollie gave Benjamin some new tubs of play-doh, which was perfect because Zoë had already mixed the play-doh the kids got for Christmas (and the kids were pretty upset when they discovered this). Ade also gave him some play-doh so now we're set for life (or until someone decides to turn them all grey). And little E. gave him a little rocket and some candy ("Kids always like candy!" E's mom said (but she's married to an orthodontist so I think it might be a conspiracy (kidding (about the conspiracy part, not the orthodontist part))).

All in all he had a great birthday party, even if it was a little low-key (and even though our plans didn't quite work out as originally planned). Rachel's happy to have his party out of the way we can now turn our full attention to her, I'm sure (and rightly so).
Posted by Nancy at 10:16 PM