We were the first to arrive for fireworks, so while we waited we kicked off the evening with some sparklers. The children were warned that this was probably the most dangerous thing they'd do today—that we were letting them play with very hot, very real fire.

After detailing the many kinds of fireworks that are illegal in North Carolina (anything that gets air or spins on the ground, basically), sergeant Dale Gunter listed the kinds of things that are legal, which is a lot of things, including, "a thin sharp piece of wire burning at 2,000 degrees that gets hot enough to cut a ’57 Chevy in half and the No. 1 cause of injuries related to fireworks in America … TOTALLY LEGAL!"

Hoping that the children understood, we instructed them to hold their sparklers at the very end of the wire and to put them in the bucket of cold water as soon as they burned out.

Here are the girls, exercising the utmost care to not get too close to those flames while trying to pass the spark: 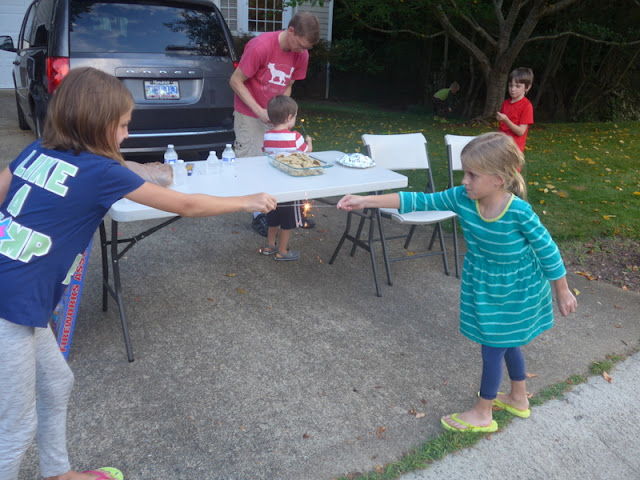 See? Sparklers are fun and not remotely terrifying: 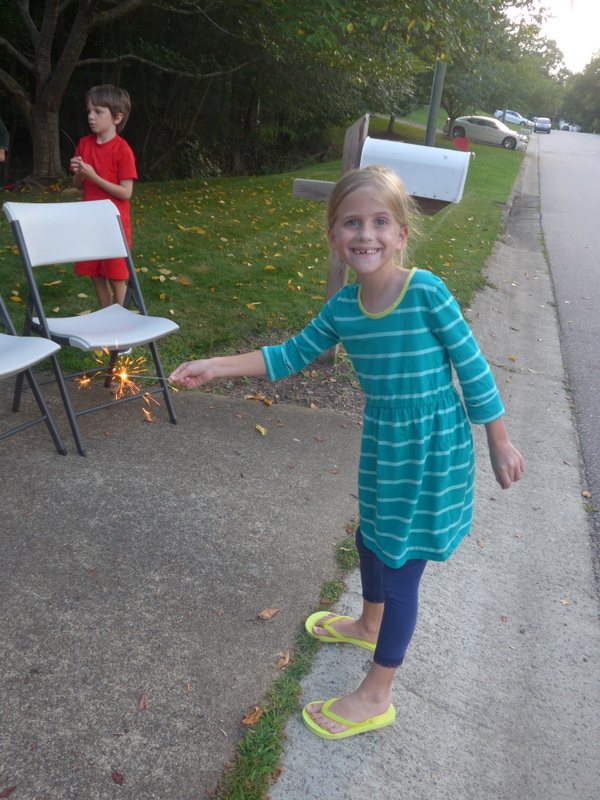 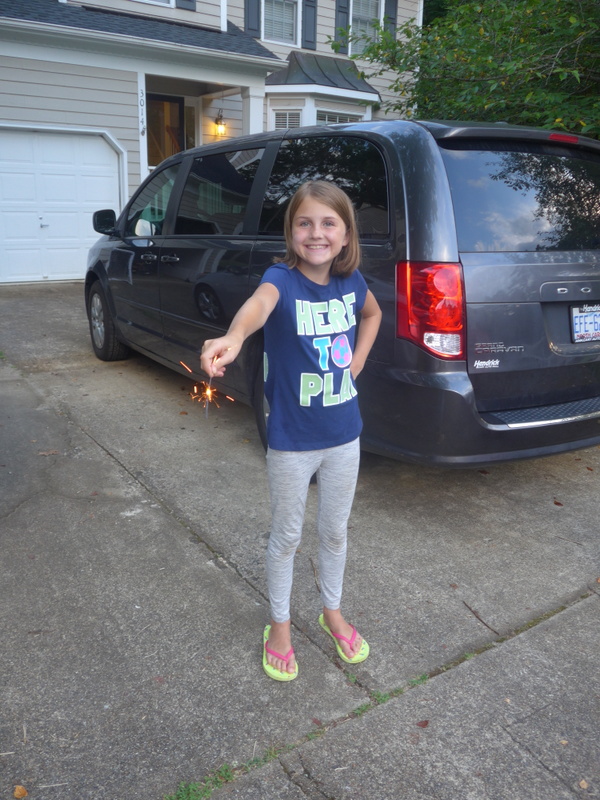 The little brothers of the group soon followed suit: 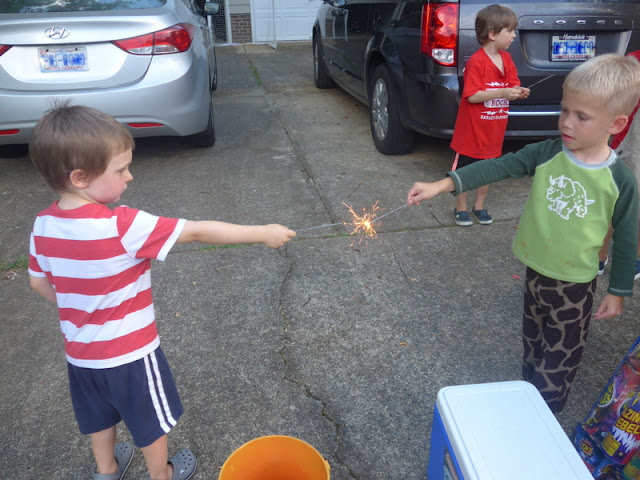 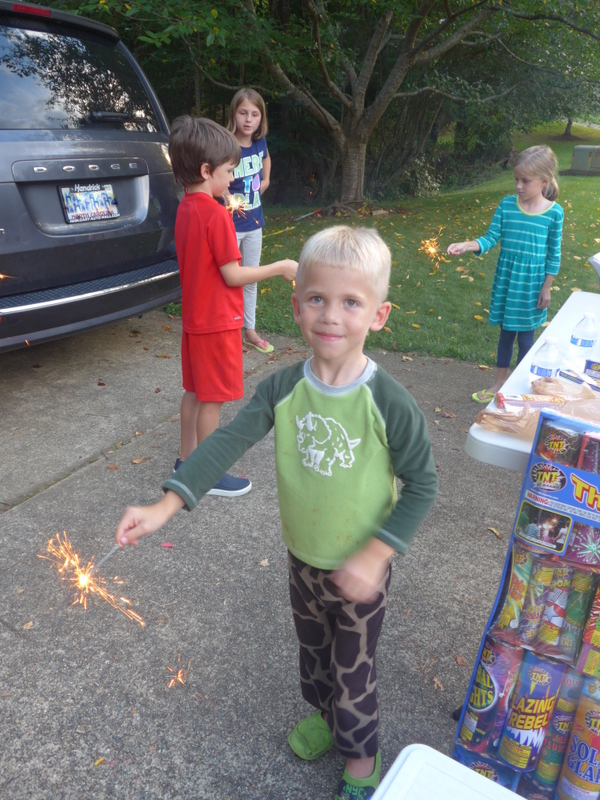 ...until yours burns out and you decide, for whatever reason, to grab the just-on-fire end of the stick with your other hand before tossing it into the bucket of water.

Benjamin didn't even cry about it. His eyes got really wide and his mouth fell open and he said, calmly, "Uhhh...does anyone have some ice or anything...?" before plunging his hand (along with his sparkler) into the bucket of water (full of discarded sparklers). 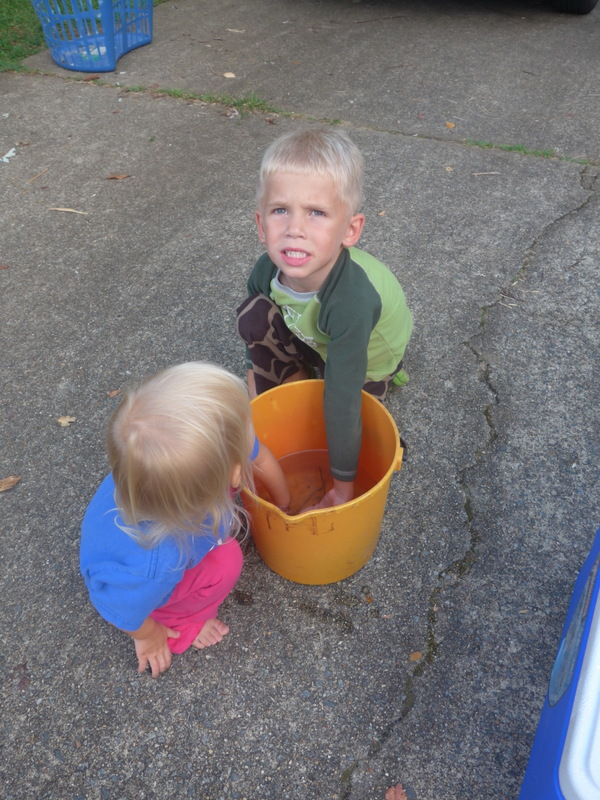 His poor little fingers are blistered and he was pretty sure his hand was never going to stop hurting but he did eventually manage to get over it...though not enough to try holding onto a sparkler again.

Weirdly enough, rather than freak Zoë out, this event prompted her to ask to hold a sparkler herself. Here are a few pictures my friend (and our hostess) Kari captured (I was too nervous to take pictures of Zoë holding a sparkler and went into helicopter-mom mode): 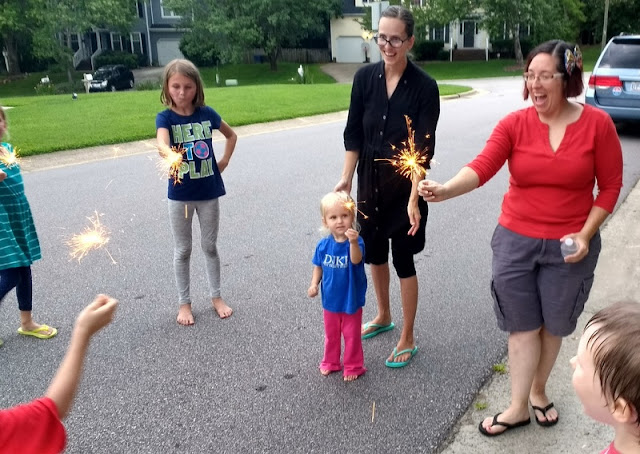 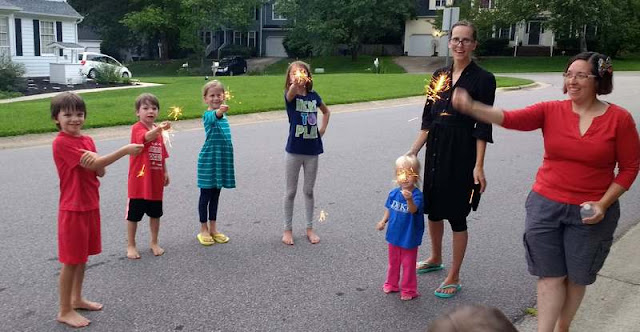 Our friend Jessica (pictured above) is such a sweet gal! She taught Benjamin's primary class last year (and was Michael, one of Kari's boy's, teachers this year...until she got released on Sunday) and all the kids love her. She's so fun and friendly. And she's a forensic scientist.

She took a class on explosives and something-or-other one semester where the teacher quizzed them by setting off fireworks. They had to know what chemicals burned what colour. She can shout out possible pyrotechnic colourants on demand. It was quite entertaining (and educational).

Here's our setup for fireworks: 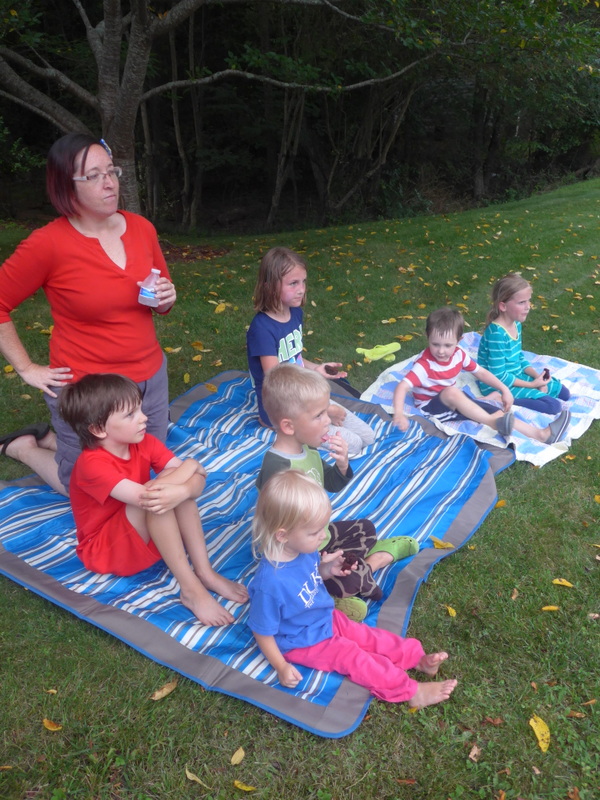 This picture is completely out of focus...but I like it...so it stays: 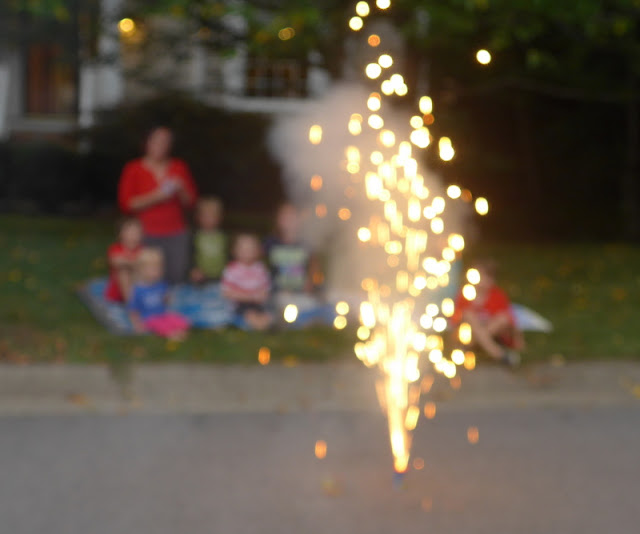 Watching the children's faces from across the street was priceless: 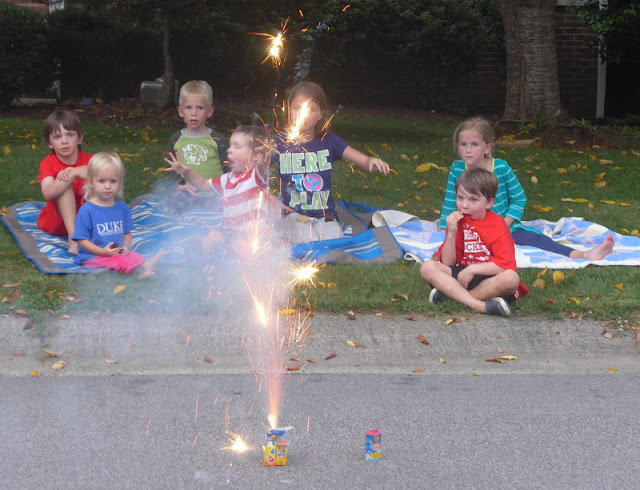 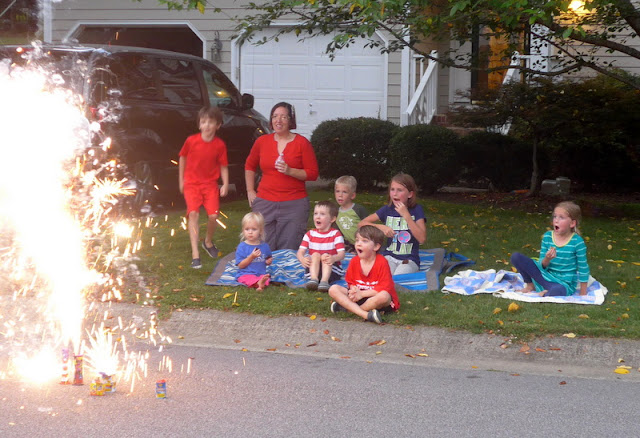 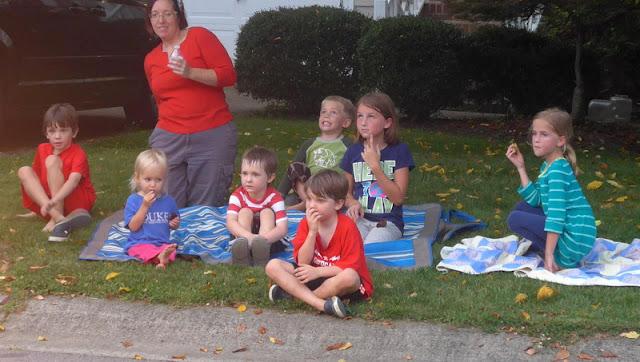 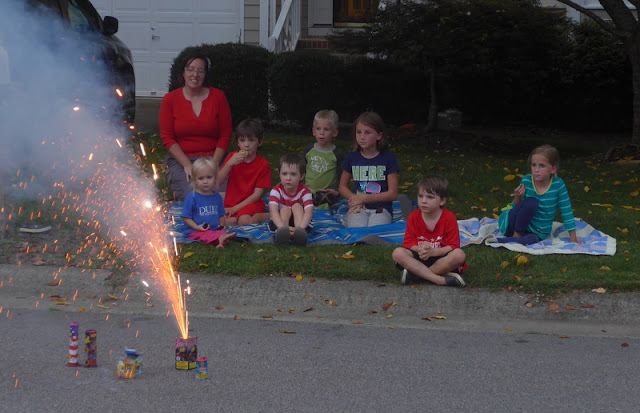 Soon, though, we came across a noisy firework... 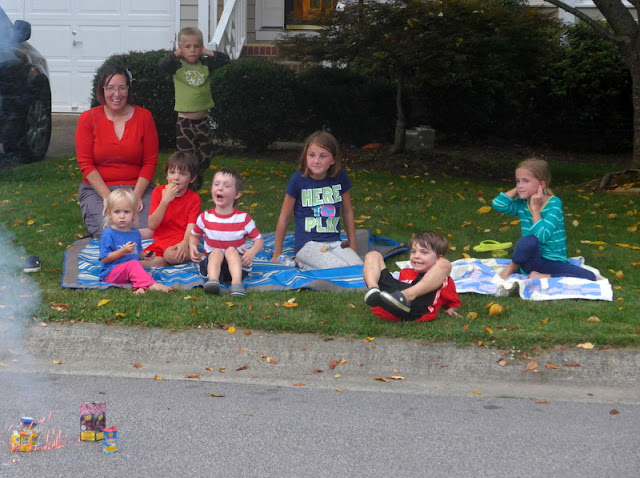 No one seemed terribly bothered at first... 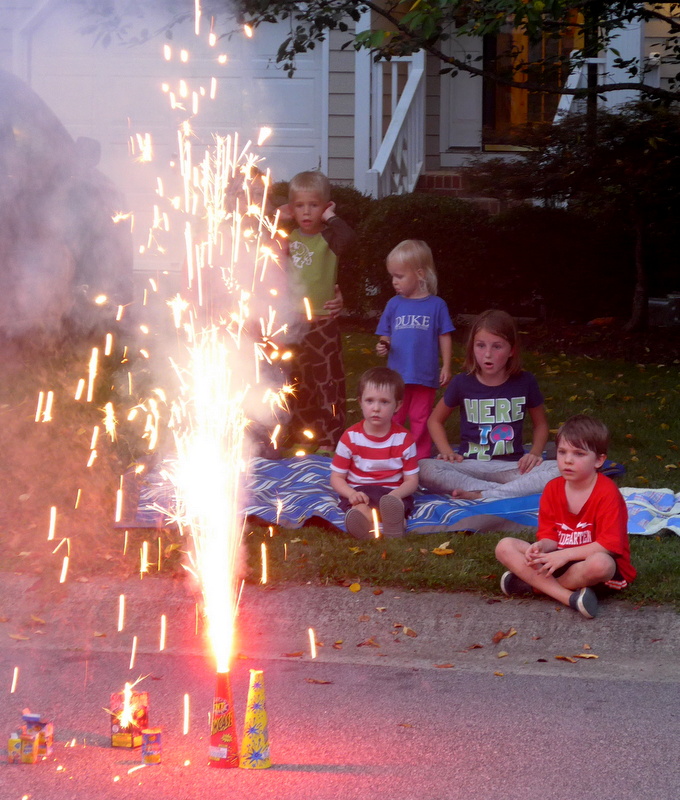 But soon the noise got to be a little too frightening: 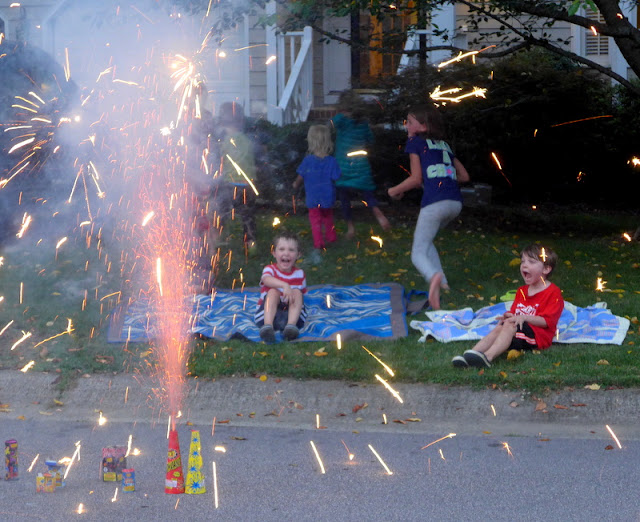 I love how Kari's middle boys are sitting there laughing their heads off while her oldest boy and 100% of my children all ran away. Haha! I ended up back with the crowd, holding Zoë on my lap. 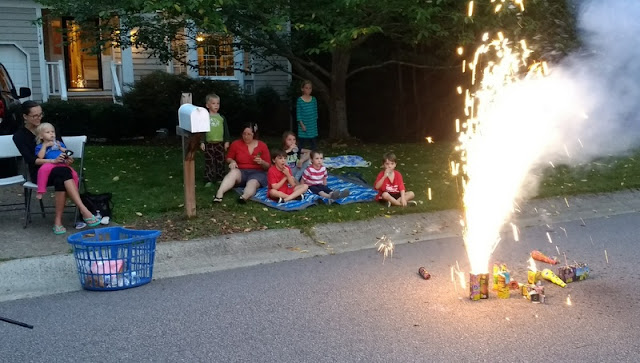 She kept saying, "Want more! Want more!" while violently shaking her head "no" (meaning, of course that she absolutely did not want more). Every time a firework fizzled out she'd relax in my arms and sigh, "All nun" (all done).

She called them "nun-ner" (thunder), which means she really must have found them terrifying (she hates thunder). 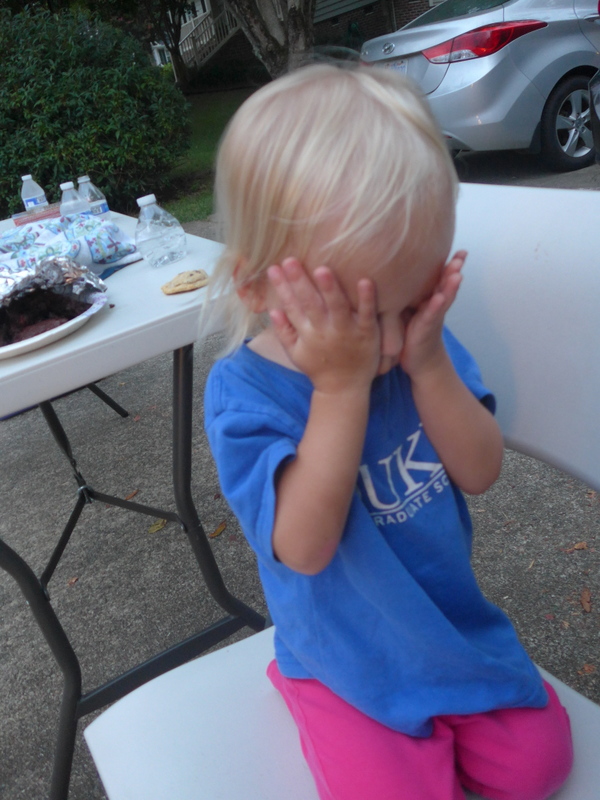 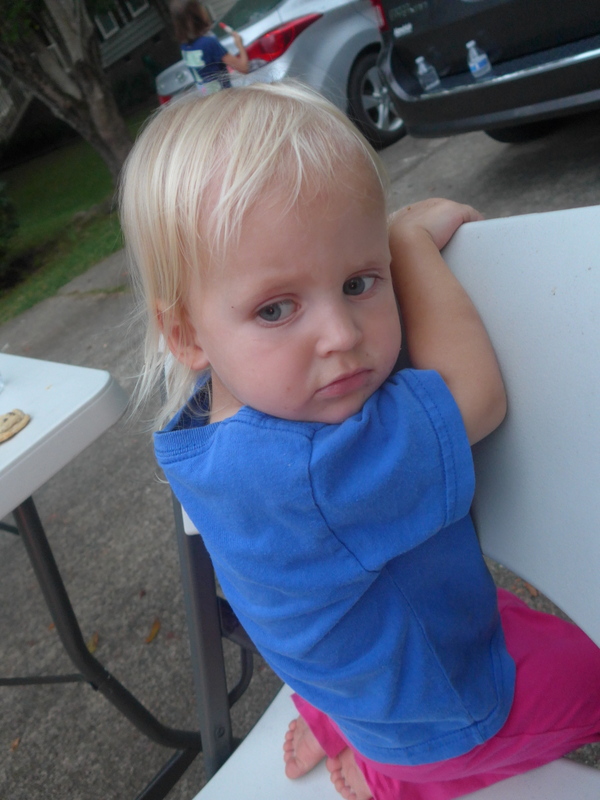 This was her face on my lap while watching a scary "thunder" firework: 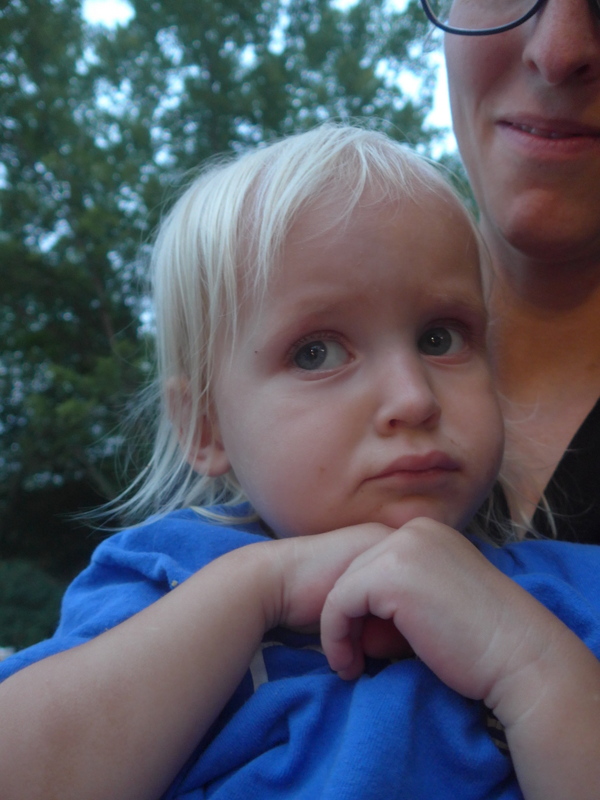 And this was her face watching a quiet, beautiful firework: 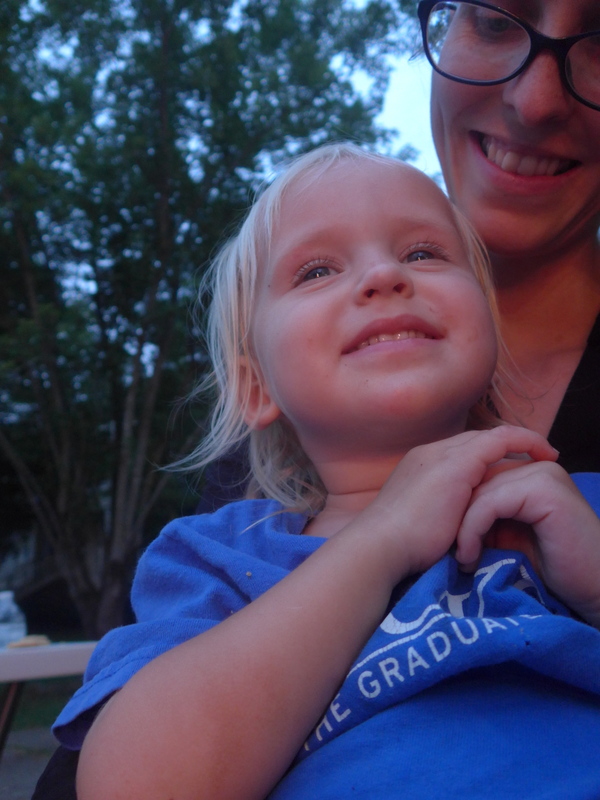 So obviously she couldn't quite make up her mind about them.

On the way home, the girls were both reading in the van, so I asked Benjamin what his favourite part of the day was because we did quite a lot: the bike parade, swimming, hot dogs and watermelon slush for dinner, fireworks with friends...

"Trying to fall asleep was your favourite part of the day?" I asked.

Apparently if I wanted feedback on the day I should have just interrupted Rachel's reading.

When we got home, Benjamin quietly begged me not to tell Daddy about his little incident with the sparklers.

"What if I don't tell him and you tell him? Can you do that?" I asked.

"Fine," he said, slouching off to tell Daddy that he'd grabbed the hot-end of a sparkler and blistered up his poor little fingers. And Daddy didn't even make fun of him (because Daddies are nice that way) and instead checked to make sure he was alright. I don't know what Benjamin was so worried about!

I was so grateful Kari invited us to mooch off of her family's fireworks! Sometimes when your husband is working insane hours that's all you need to go from So-Done Mom back to Fun Mom.
Posted by Nancy at 1:44 AM