We stopped to take a picture by "The Tickle Bush" on our after-dinner walk today. The kids like to walk right next to the bush and let it brush against them, which tickles (hence the name). Zoë requests "Bush! Please! Bush!" every time we go walking, so I have to push her stroller in the gutter so the bush can tickle her, too. We all chant, "Tickle bush, tickle bush, tickle bush!" in a goofy voice as we pass by/through it. 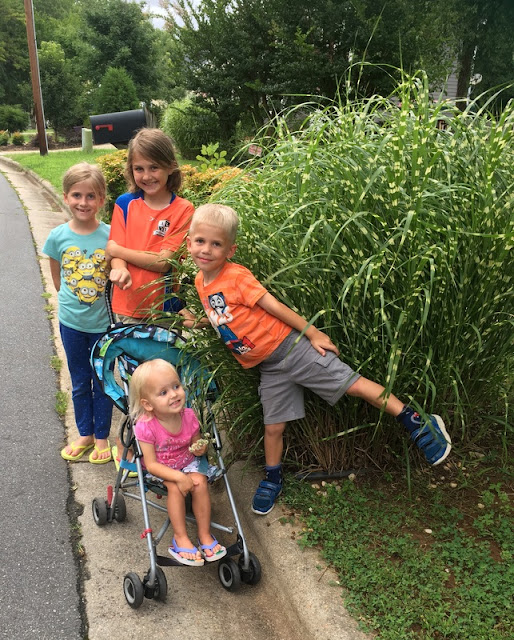 I did the same thing for Benjamin when he rode in the stroller.

Rachel and Miriam kind of missed out on that tradition, but I still say "Tickle bush!" for them as they run through the outstretched leaves. They're maybe getting too old for that sort of thing, but they're every bit sad as Benjamin and Zoë about having to say goodbye to The Tickle Bush. Benjamin is probably the saddest of all since he understands that he only has 24 more days left with his Tickle Bush.

Not to worry, children. I'm sure we'll find other fun things to do on our new walking routes.

It's not even really a bush. It's some kind of ornamental grass. Rachel asked what it was actually called today and I couldn't tell her so she claimed naming privileges (again! (what is with these kids and having to name everything?! First Alexander, now The Tickle Bush)).

I felt like I was a clown pulling a chain of handkerchiefs out of someone's ear or something! I ended up with a whole (rather crumpled) bouquet of clover.

Here it is resting on...Alexander: 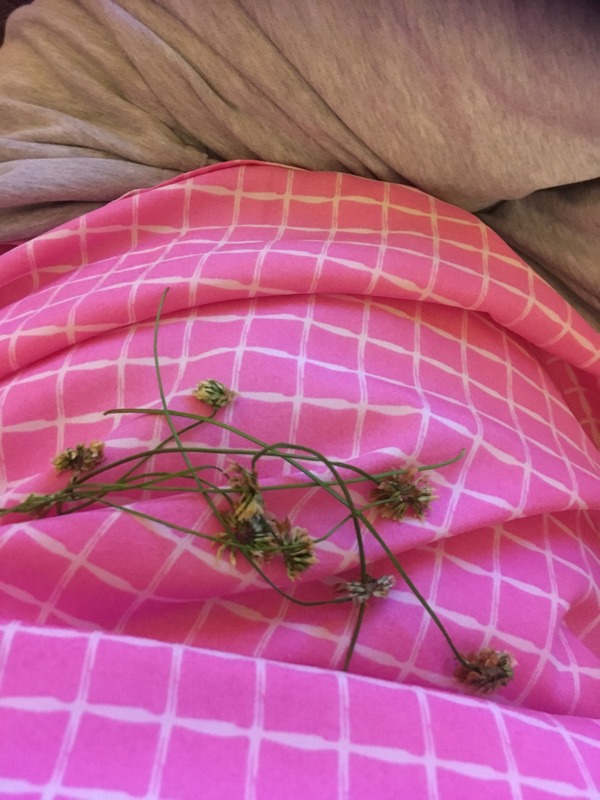 So Benjamin wasn't just pulling on my pocket to be annoying! He was really trying to be sweet (with just a little bit of slime and snails and puppy dogs tails to keep things interesting). The added bonus is that it made me laugh until tears were coming out of my eyes.
Posted by Nancy at 12:21 AM