Just as I was herding the children off to bed, Andrew texted me with part of his dissertation introduction. I told him that I'd get to it as soon as I had all the kids tucked in but then I walked into the hall and saw this: 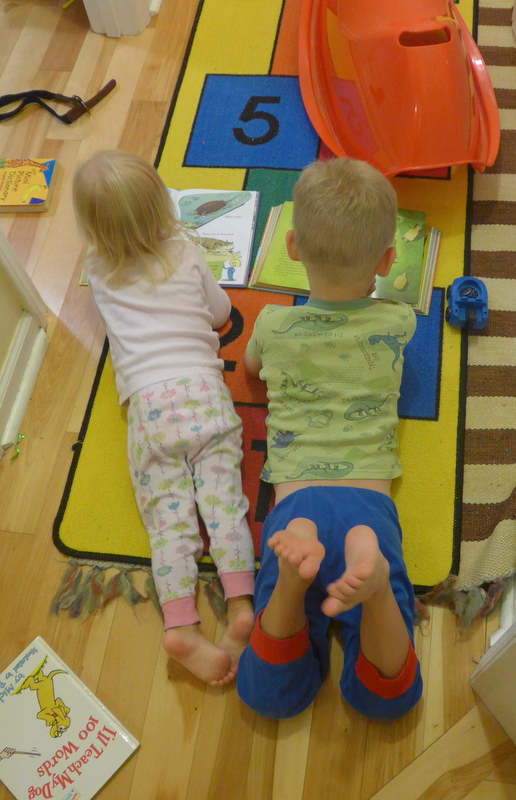 ...so I just let them be because do you know how often it is that they calmly spend time together? Like, never. These two are always wrestling with each other (which is why they don't share a room). 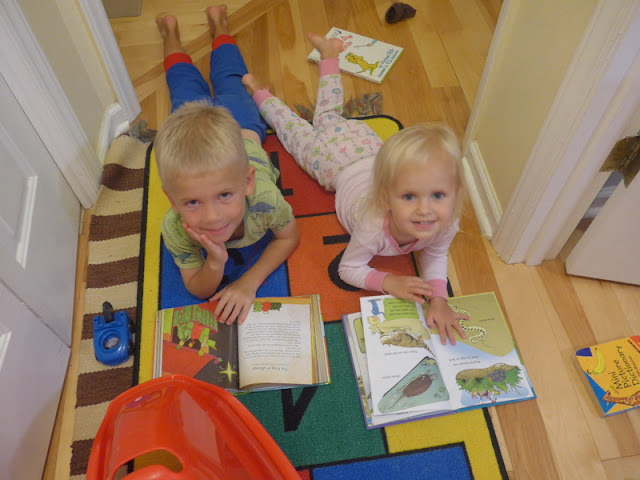 The section Andrew sent me only ended up being about five pages anyway, so it didn't take too long to read through, and when I returned to really finish putting the kids to bed I found Benjamin sitting on top of Zoë, grinding her face into the carpet (which, frankly, wasn't as cute as when he was reading with her). So I peeled him off of her and sent him to his bed while I escorted her to her bed and I finally, finally had all the kids asleep by 10:30 or so.

Andrew's been working such long hours that it literally feels like he's away at a conference. This whole time he's been planning on working straight through to his deadline, which is Friday, but on Monday he found out that his advisor has to submit a letter saying she has a copy of and has read his dissertation on the same Friday, so she asked for him to submit it today. So then he really started working straight through...everything.

On Sunday he took a break from writing for church and dinner and a game of Ticket to Ride with the kids so that they would "remember they have a father."

But then Monday happened and I don't think the kids haven't really seen him since. In fact, he even slept at his office last night. I took the kids for a walk a few days ago and Zoë saw a man with a buzzed haircut, wearing shorts and a plaid button-down shirt. "Daddy!" she squealed, reaching up to him. "That's not Daddy!" I said, laughing awkwardly as we passed the man.

"Nope. That wasn't Daddy. That was embarrassing," Rachel said.

H'yup. But each kid comes with an embarrassment quota, so it's to be expected.

Andrew's still not finished, though he was supposed to have turned in his dissertation to his advisor by...this morning. He's feeling quite relieved today because I guess she recently emailed him to inform him that she read her instructions incorrectly and she can submit her letter after he submits his dissertation to the graduate school. So the Friday deadline still stands and he can relax a bit because Friday is tomorrow and not today. (It's her first time heading an advisory committee (at least at Duke) so it's an understandable mistake—and it was probably good of her to turn up the flame on Andrew, who thrives under pressure).

He's still on campus finishing up his conclusion. I'm sure I'll see him in the wee hours of the morning. He said he's not sleeping on campus again.

He didn't want to sleep on the couch in the hall because...it's a couch in the hall...so at about 3 AM he took a pillow from the couch and went to bed on his office floor. Knowing that the cleaning crew would be coming around, he left his garbage can outside of his office, in front of his door. But they came in anyway and the automatic lights turned on and I imagine it scared them both half to death. Haha!

We'll all be very happy when this thing is submitted (and then defended) so that we can get to some other things on our to-do list, like hitting the beach and packing the house (which will both have to happen before he defends).
Posted by Nancy at 11:51 PM