My friend Laura took all of my kids yesterday and kept them all afternoon. She picked them up around 11:15 and then Andrew went to get them after work. It was amazing! I got so much accomplished!


While the kids were playing in sprinklers, sewing, and making themselves quesadillas, I tackled Rachel's bedroom. I'd tried multiple times to get her to do it herself but she hadn't made much progress. When she looked at it she was quite happy to see it done because it had been too "overwhelming" of a task from her. It was quite overwhelming. She's a bit of a packrat, a trait I completely understand—but does she have to keep every kleenex she's ever used?! Surely those could have been weeded out before I got in there to make the keep-or-toss decisions.

Anyway, her room is mostly packed up now. There are still a few stray items but for the most part it's just boxes and furniture.

Near the end of the day, Laura texted me a picture of Zoë sound asleep in Lina's bed. Apparently Rachel and Lina did most of the babysitting and they decided she was tired so they put her to bed and she actually fell asleep (shocker).

When the kids came home we had what-random-foods-can-we-eat for dinner and then had Rachel open her presents. She was quite worried about how the day would play out without cake. In the morning she said, "So, when am I going to open my presents? Because not having a cake is kind of throwing me off. Like, what's the timeline now?"

Cake and then presents or presents and then cake?

Obviously with cake involved you have to wait until after dinner but does the rule still hold when there is no cake involved?

I told her that we would for sure have to wait until her father got home (and since he was picking her up from her friend's house that made knowing when he was getting home pretty easy). After dinner it was a question of presents and then Pelican's or Pelican's and then presents? Rachel chose the former (so that I could bike while she unwrapped them, she said, but really I think it was because she couldn't wait any longer).

She got a notebook, some cool pens and her own set of the Harry Potter series. Our family set is a miss-matched hodgepodge of soft and hard cover books that have been read so many times they're about ready to fall apart (or are falling apart, depending on the volume). Eventually we'll have to get a new family set, I guess, but until then, having this girl own her own set will dramatically decrease the wear and tear on our family set. She tends to read through the series a couple of times a year (at least). 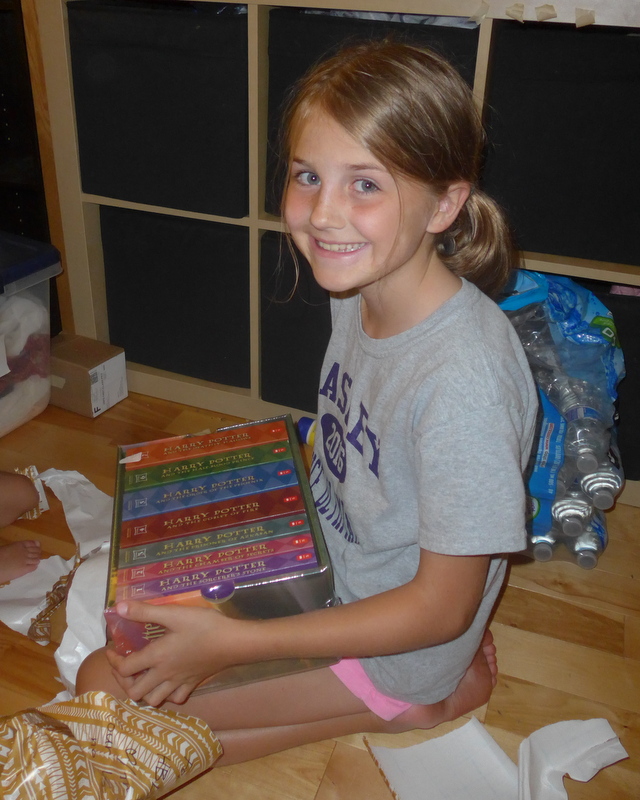 Here she is at Pelican's, trying to settle on two flavours to try (root beer and lemon lime...in the same cup...sure): 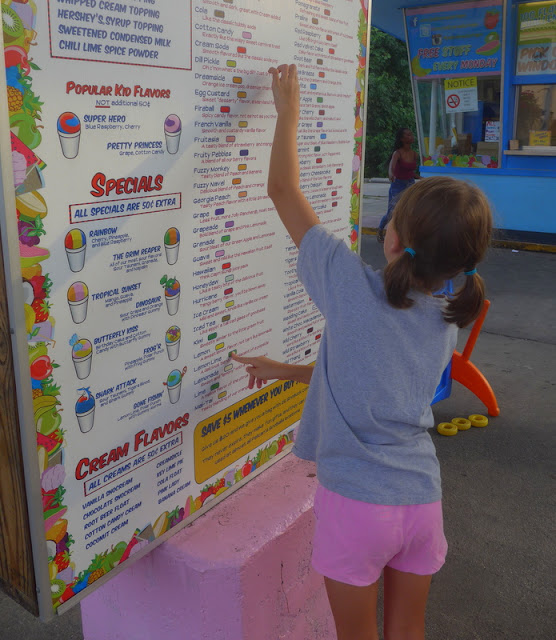 Here she is pointing to her near-bull's eye: 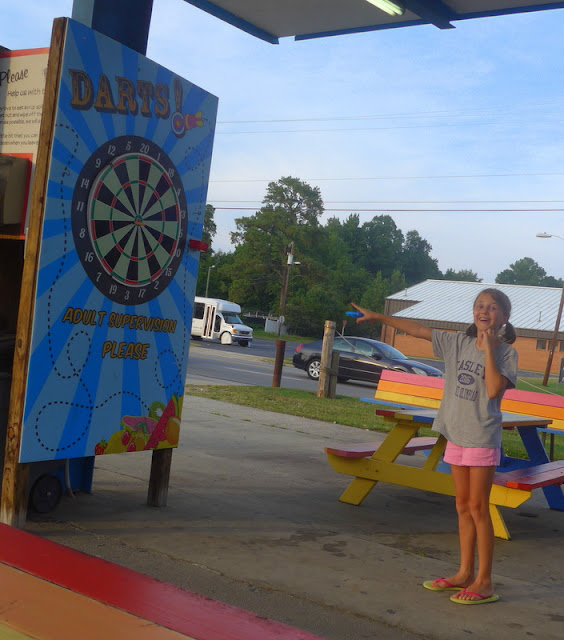 I brought along birthday candles so that we could sing to her. She wasn't entirely impressed with the idea of her "fire and ice" birthday and instead worried that it would just melt her SnoBall. Never mind the fact that it's, like, a billion degrees outside... 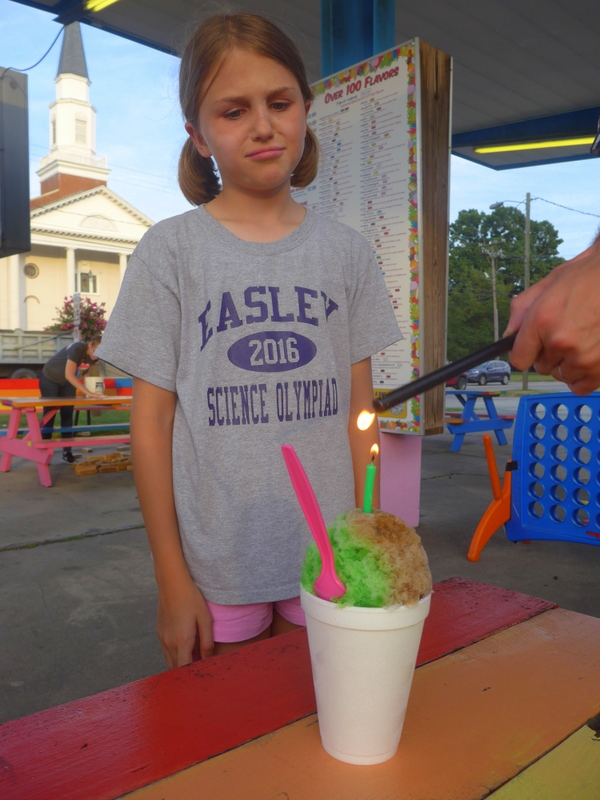 But everyone knows that your birthday hasn't really been celebrated until you've been sung to and have blown out your candles, so, as her parents, we insisted. 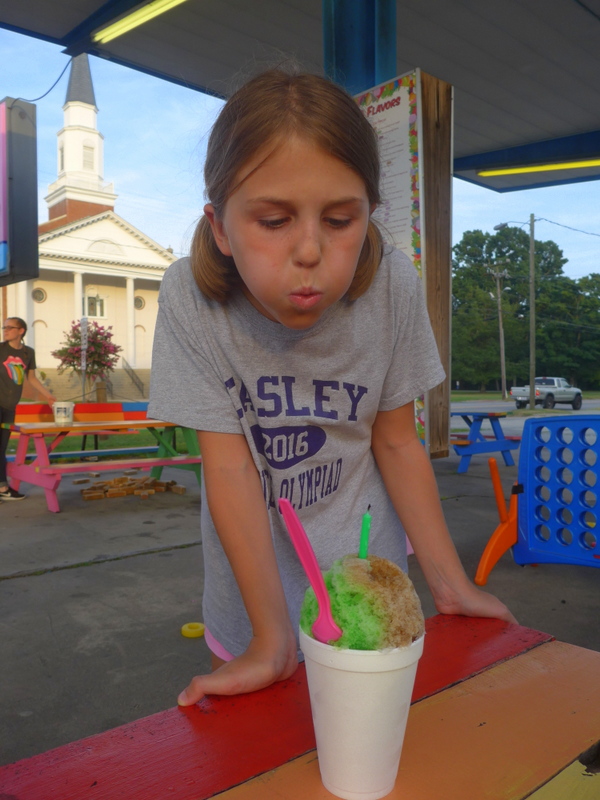 It really didn't melt much of her SnoBall at all, though it did leave a little bit of wax behind (but that happens on birthday cake, too, so there, Rachel). Here's a happy, newly minted ten-year-old, ready to dive into her root beer and lemon lime concoction: 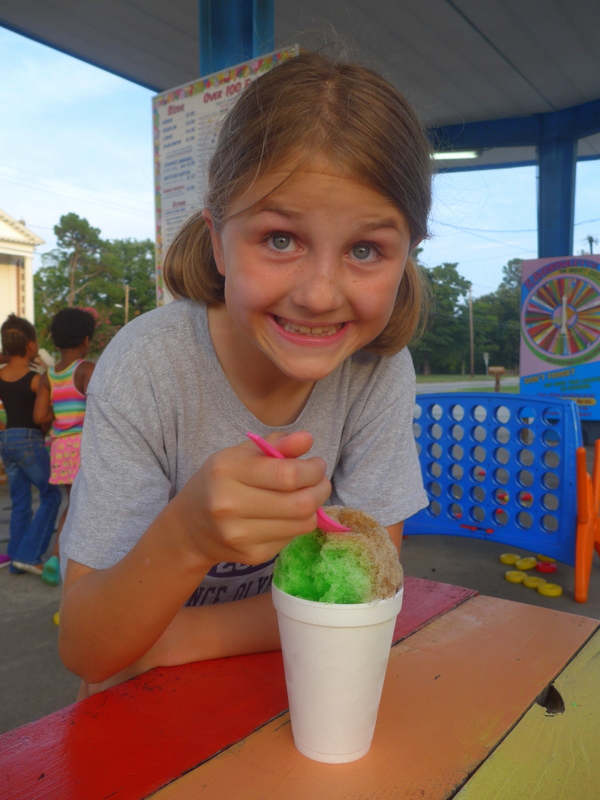 We sat at the picnic table for a while... 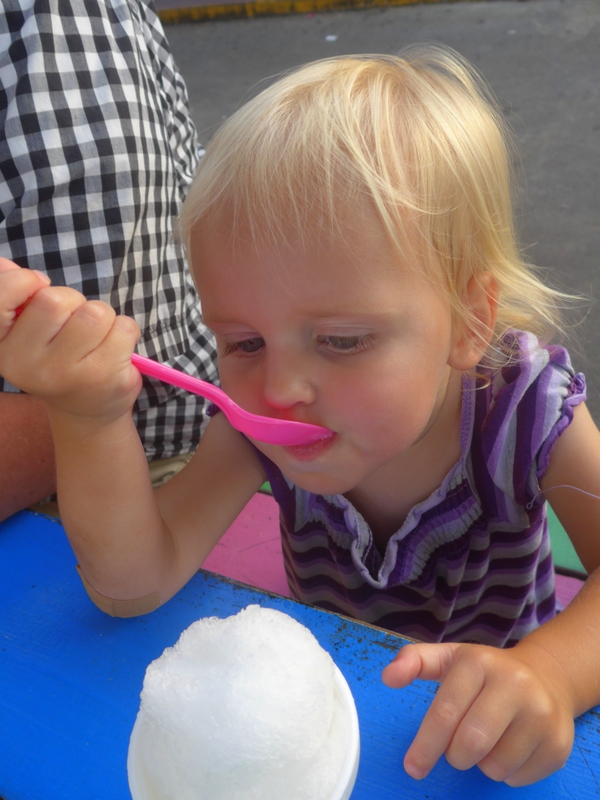 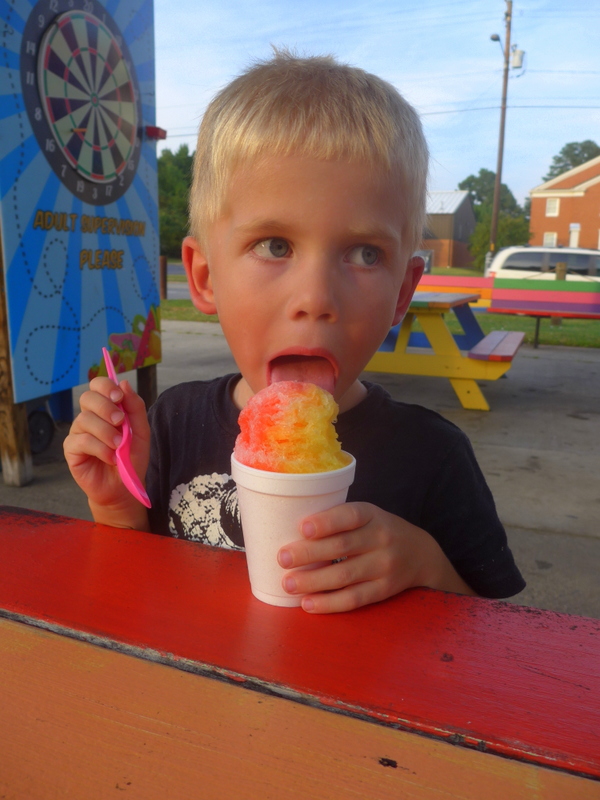 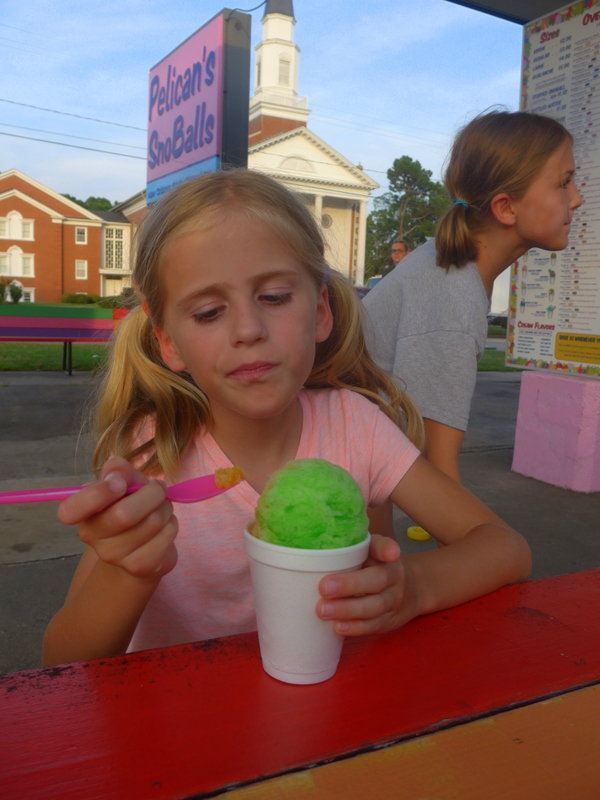 But soon the bees got to be too much... 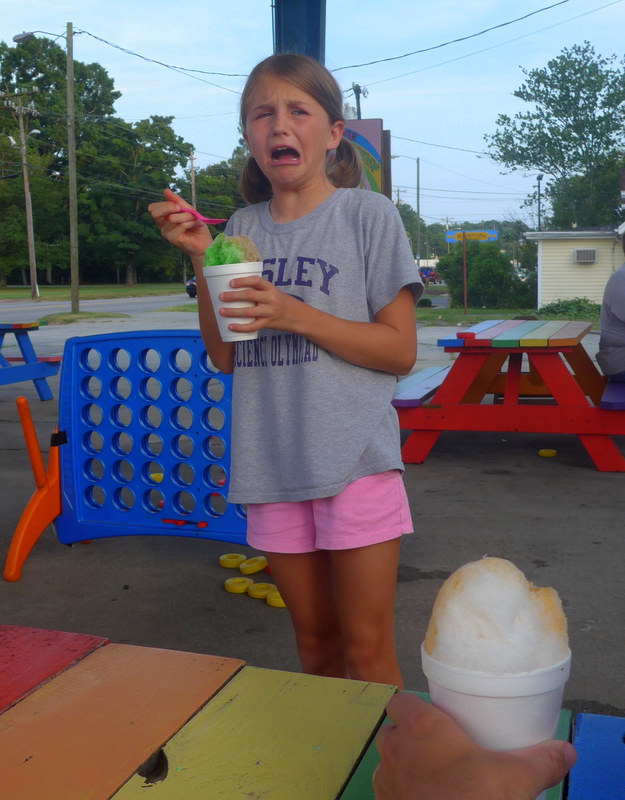 Here's everyone enjoying their SnoBalls together: 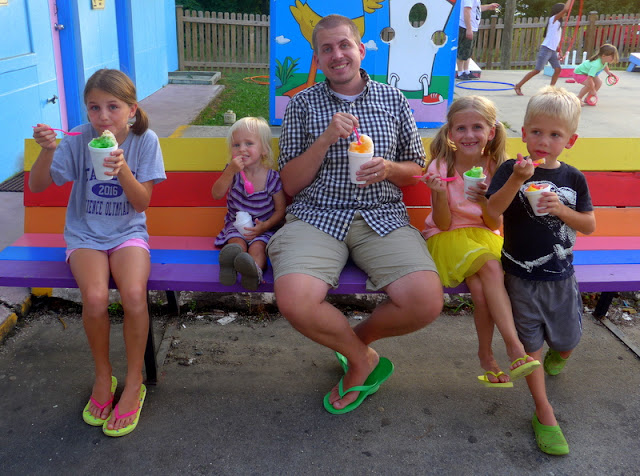 The kids are a little worried about leaving Pelican's behind (not that we go there very often) but we assured them that in Utah there's a "shave ice" stand on just about every street corner so they won't be missing out on much.

I didn't have anything. They have sugar-free options, but they don't really have nutrition facts available and sometimes sugar-free is not synonymous for go-ahead-and-indulge. 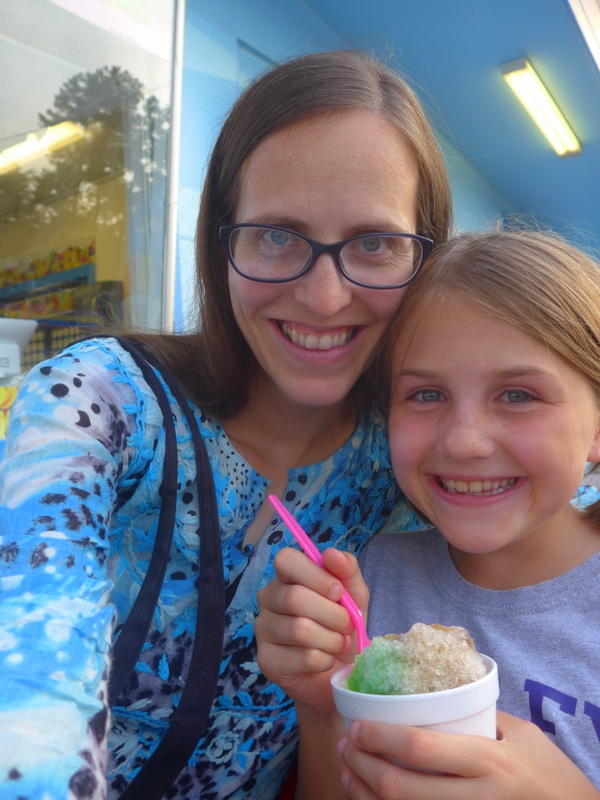 As the kids finished up they bounced away to play games (they were mostly interested in the dart board (it's new) but there's also corn toss and hoola hoops and a big Connect Four game and an oversized version of Jenga, so there's lots to do). 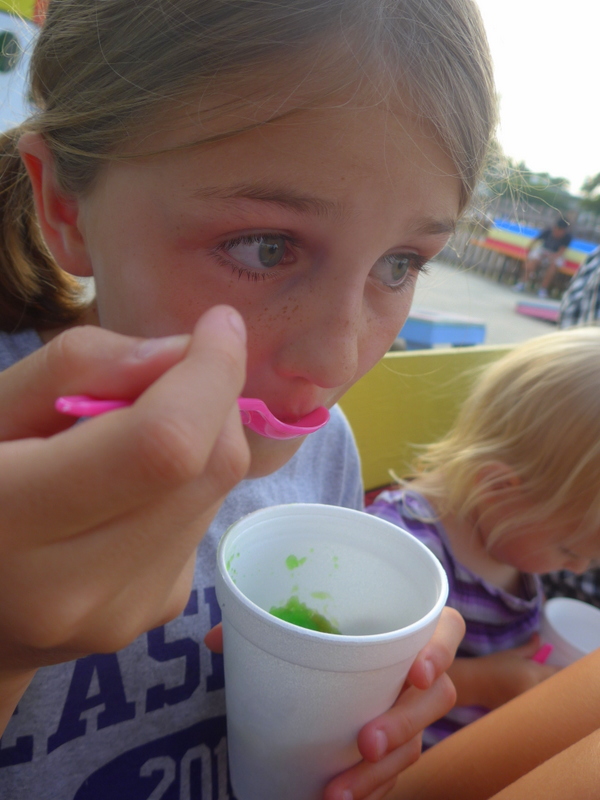 Soon Zoë was left sitting alone on the bench to finish her treat: 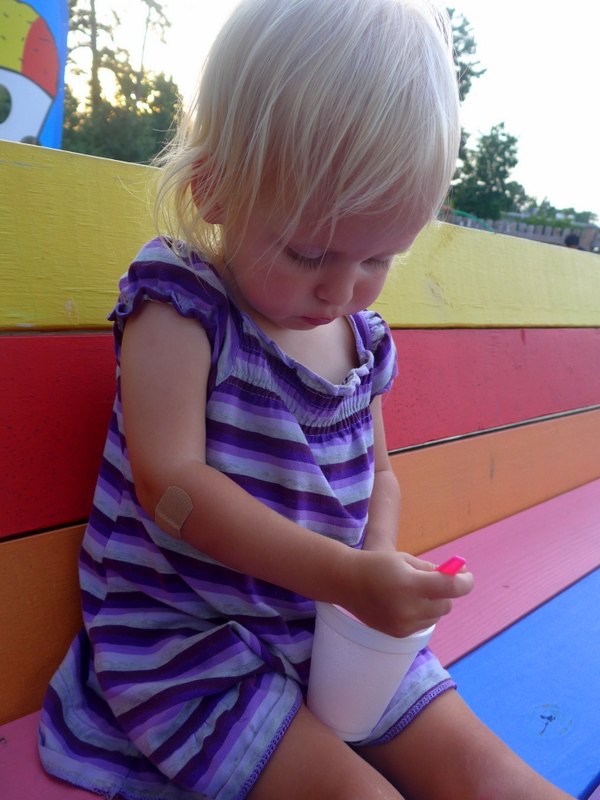 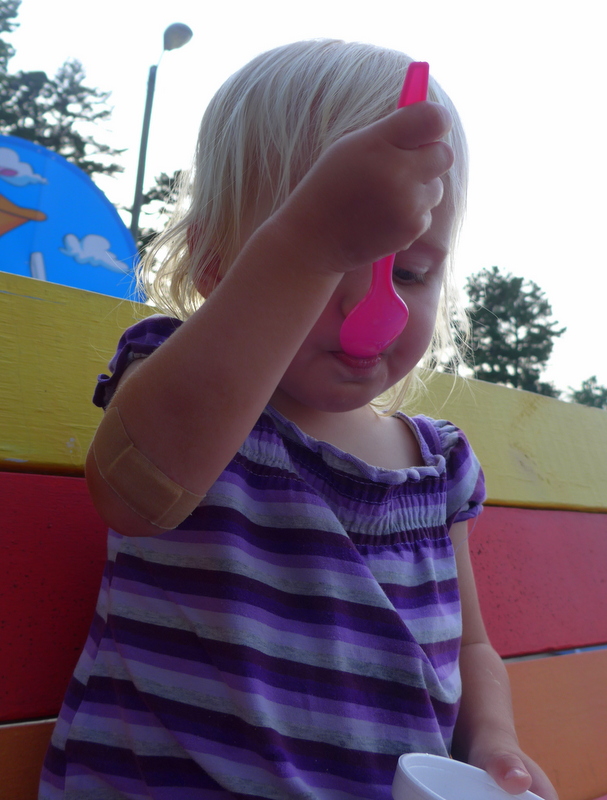 Naanii and Bumpa called us on our drive home and Rachel got several messages from aunts and uncles wishing her a happy birthday. Even if it was a little low-key, I hope it was a good birthday (we'll go bigger in the near future).
Posted by Nancy at 9:39 AM