Not your everyday chores

Within four hours of listing Andrew's scooter for sale it was gone. We were shocked because selling his last scooter took weeks. Of course, that one needed quite a bit of work by the time we sold it and no mechanic for miles around would agree to work on it and we were having a terrible time even finding parts for it online.

This one, however, we've kept in pretty good shape and it has served us well. 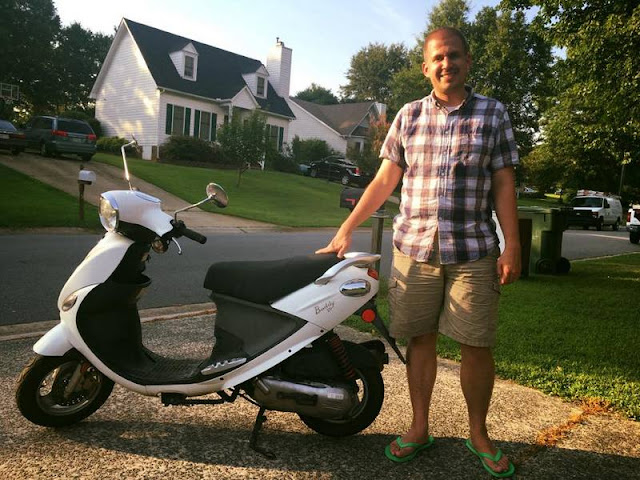 While it isn't entirely practical for a family of six, it was a great little commuter vehicle for Andrew. Gas is cheap, parking is easy, and it bumped us up from a one-car family to a one-and-a-half-car family.

This morning after the kids had done their regular chores I "let" them wash the scooter so we could take pictures of it in order to post it. After they'd scrubbed off all the grime, I went over it with a magic eraser and took off all the scuff marks. It looked so pretty when we finished I almost wondered why we didn't wash the thing more often...

I wondered the same thing about our blinds after we cleaned those, too.

I've already just gone and hired a cleaning company to do a move-out clean for us. My irritable uterus starts feeling grumpy if I overdo anything and we're doing our best to keep my uterus happy because happy uteruses (uteri?) keep half-baked babies nice and cozy while grumpy uteruses evict half-baked babies.

We learned this the hard way when we were packing up to move out to Durham five years ago and would prefer to not repeat history. So we're happy to pay someone to do some of the heavy cleaning for us: the oven, the fridge, and so forth.

Still, there are some things not included on the list they gave me, and while they said windows they didn't say anything about the blinds so I decided I'd clean those myself. I'd never taken them down to clean them before and I totally should have because the process was a lot easier than I thought it was going to be (except for the one over the kitchen sink, which I wasn't able to put back in by myself so I'm waiting for Andrew to get around to it). That's not to say that I've never cleaned the blinds. I have.

I've dusted them and I've scrubbed off obvious splatter...but taking them down and giving them a good rub down in the bathtub revealed how filthy they truly were. Although it wasn't exactly taxing work, kneeling down over the bathtub wasn't entirely comfortable and I began wondering how I'd ever finish the task I began.

And then I remembered that I have children! I "let" them take over for me, which they all thought it was great fun. And now our windows look so bright and cheery! 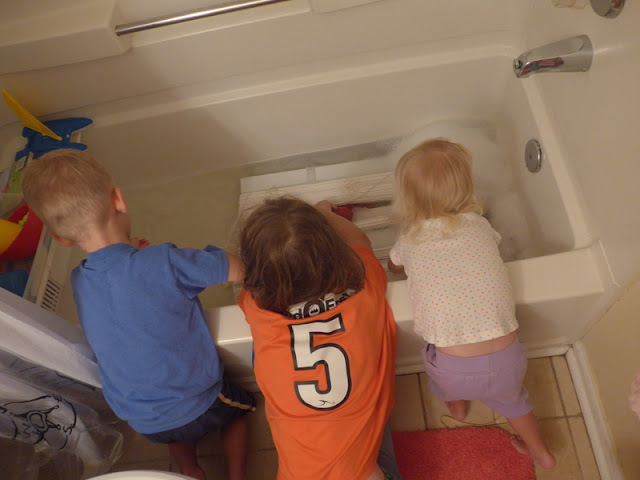 I wonder what other unusual, slightly unsavoury, but too-interesting-to-pass-up chores I can foist on the children tomorrow. Bwa-ha-ha!
Posted by Nancy at 12:31 AM