Yesterday afternoon when I got up from my nap (simply can't seem to make it through the day without one of those lately; especially since I've been staying up until the wee hours of the morning editing sections of Andrew's dissertation while he writes and writes and writes), Zoë pounced on the bed and squealed, "Pool?!"

Going to the pool in the afternoon has pretty much become routine (and we're sure going to miss having access to a pool like this when we move).

I told the kids that, yes, we could go to the pool, but because we had to walk we wouldn't be able to stay for very long since we still had to have dinner before going to our friends' house for fireworks. They agreed to this and quickly started getting ready to head to the pool—all except Rachel, who still had to practice the piano. Technically piano practicing is supposed to happen in the morning but the morning had been rushed and busy and it didn't ever happen. So while the rest of us got ready to go to the pool, Rachel practiced the piano, with the understanding that she'd start getting ready after we left and then would catch up to us (and surpass us) on her bike.

The kids all have a swim shirt to wear in the pool, not so much for modesty's sake as for skin cancer's sake. Making sure everyone gets sunscreen on their arms, legs, faces, and necks is plenty enough to worry about without having to bother with backs and tummies, too! Everyone seems to like them because no one (except, perhaps, Zoë) really likes putting on sunscreen. The only problem with them is that the tight neck holes can make them difficult for little kids to take on and off, especially if they have ginormous noggins (like, for example, Benjamin).

We were pleased to see that the line of swim shirt our local Costco sells had added snaps to the toddler sizes of their shirts. Putting Zoë's shirt on is a breeze; when Benjamin was that size the shirts didn't have snaps so we had to wrangle him in and out of his shirt. The manufacturer seems to think that by the time children are five they should be able to get in and out of shirts on their own, however, and nothing above 4T had snaps at the neck. So we're still wrangling Benjamin in and out of that shirt.

When we pull it off of him, it flips inside-out. And he hasn't yet seemed to figure out how to get it the right way out again, so he always asks for help. Yesterday was no different and when he retrieved his swim shirt from his hook in the bathroom it was inside out.

"Mom! Can you help me un-inside-out my shirt?" he asked me while I was busy getting Zoë and myself ready.

"It's Independence Day so you need to try doing it yourself," I told him (because I'm hilarious).

"WHAT?" he shrieked, quite offended that I didn't immediately jump in and fix it for him.


"Just reach your hand up through the bottom and grab the neck of the shirt and pull it through," I instructed. "Now do the same thing with the arms. Reach through to the inside and pull it out. Now the other."

And now I'll never have to un-inside-out it for him ever again! Three cheers for Independence Day!

It was a hot, hot walk to the pool. I was a little jealous when Rachel whizzed past us on her bicycle, so was Benjamin, who pointed out that she "wasn't even pedalling!" And she wasn't. She was just coasting down the hill (lazily trying to catch up to Miriam, who was also on her bike far ahead of us) while we were laboriously cutting our way through the muggy afternoon air.

When we finally made it to the pool we could think of nothing else but ditching our shoes and hopping in to cool off. We were most disappointed to find that the pool was no longer cool and refreshing, as it had been in June. Instead it was tepid bathwater. Still, it was better than sweltering in the sunshine. 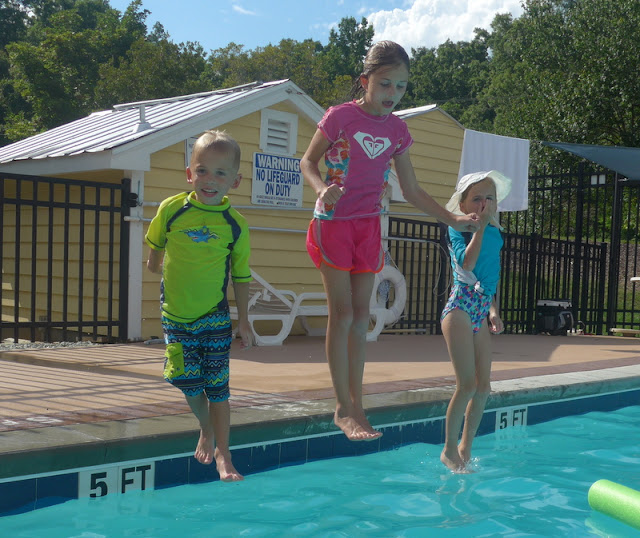 The kids had a (mostly) fun time jumping into the pool and clowning around.

"No snacks today," I said. "We're only here for a little while so enjoy the pool while you can and then we'll go home and get some yummy dinner, okay?"

Feeling very unhappy about this response, Zoë began stomping her wet little feet on the slippery-when-wet deck, which caused her to slip, of course. She smashed her face onto the ground, then tumbled head-over-heels (literally flipping over) into the deep end. I sure was glad she still had her little puddle jumper on—silly girl!

Just as it was time to start drying off we heard the distant call of thunder, so the pool was clearing anyway (which always helps my case when trying to get somewhat stubborn children out of the pool).
Posted by Nancy at 9:45 PM