A funny thing happened on the way to the...

Zoë had "quiet time" in the basement after church today. She cried like she was being sent to the executioner when in reality she was only being sent downstairs to play (it's was Benjamin's week to have quiet time in the bedroom and, well, "it's [her] bedroom, too!"). She was doing such a good job at quiet time that I asked Andrew if he had turned on a show for her. He proudly told me that he had not. She was playing.

But then he went downstairs to check on her and found her fast asleep (but she only fell asleep after she'd tucked in her t-rex, because that's important).

"That's crazy!" I said. "Do you think she's starting to need naps again this late in her waning toddlerhood? Cuz..." 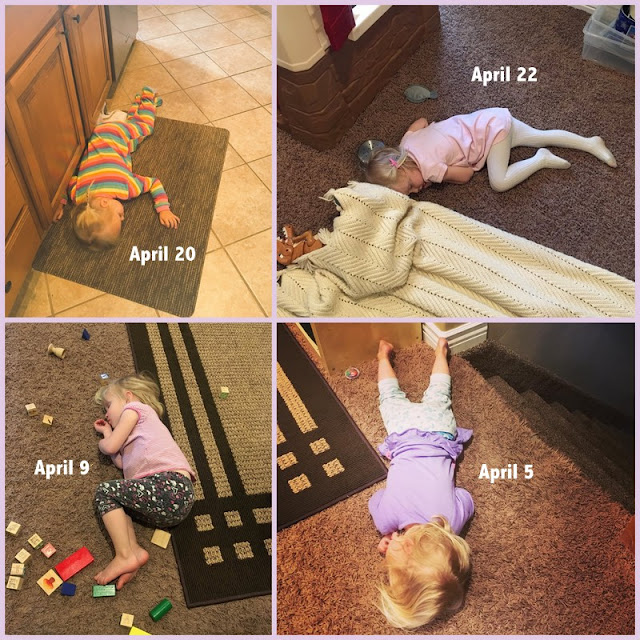 She also fell asleep on Friday afternoon, rather late (too early for pyjamas, but she wanted to wear them). She'd been screaming for a snack and I kept telling her that it was nearly dinnertime so no. She continued tantruming for several minutes before suddenly dropping off into radio silence, which was nice for a minute, but then I started to worry.

I called her name as I wandered around the house looking for her, finally stumbling upon her, in all her rainbow-jammie glory, taking a nap on the mat in front of the kitchen sink.

She also curled up for a nap on April 9 when she was supposed to be picking up her blocks, and—I'm not sure whether this one really counts as a nap because she'd woken up at o'dark thirty in the morning begging for breakfast on April 5 and I asked her to go back to bed for a while. I thought she had because she walked back that direction and I didn't hear any getting-into-stuff noises or see any lights turn on and I couldn't check on her (I was nursing the baby (and then fell asleep (don't judge)); Andrew was out of town) until everyone was legitimately getting up in the morning and there she was, fast asleep, at the top of the stairs!

And then she woke up and threw up and...ahh, memories.

That's like four naps in one month, which is unheard of at this house, especially with this child.

So then I thought to myself, "Maybe she's a better napper than I thought..."

But, honestly, if that were the case, would our first reaction be "Quick! Grab the camera! She's actually sleeping!" I don't think so. We're legitimately flabbergasted and nonplussed (which are very nearly synonyms, believe it or not) by her recent behaviour.

So while part of me wonders if we should possibly or could possibly introduce the idea of napping to her, the other (larger and wiser) part of me knows that we can't even spell N-A-P in her presence, let alone say it (and, in fact, she even caught on to spelling nap backwards P-A-N and then when we switched to spelling S-L-E-E-P she started throwing fits whenever we'd spell anything; the child hasn't regularly napped since...ever. She hates napping (and only recently learned to enjoy bedtime)).

But maybe, by some miracle, she'll come to enjoy napping on her own.

Or this could all be a fluke.