The first stop of the day on Saturday was Bear World, which our family hadn't been to since we drove Auntie Emily up to see Uncle Morgan four days after returning from their mission(s) to Nauvoo (where they'd met). That was all the way back in August 2010. They got married in December. And the rest is history!

Our little caravan drove through the park to see the animals: bison, bears, elk, bears, mountain goats, more bears, so many bears. We considered trying to cram into two cars (because if we paid by the carload that would certainly be less expensive) but after the ride up to Idaho, Grandpa thought it would be best if we took three cars: Emily and Morgan with their four kids, Andrew and me with our five kids, and he and Grandma in their quiet car all by themselves. As it turns out, paying per person was cheaper than paying per vehicle (on account of having so many toddlers with us; they're free) and it was the first day the park was open so admission was half off (and the place was relatively packed).

Here are some obligatory animal pictures:

He just moaned in agreement. Spring is not his friend.

And I'm sure none of the animals actually had mange; they're just moulting.

But the baby animals sure are cute!

Here are some sweet, fuzzy cubs: 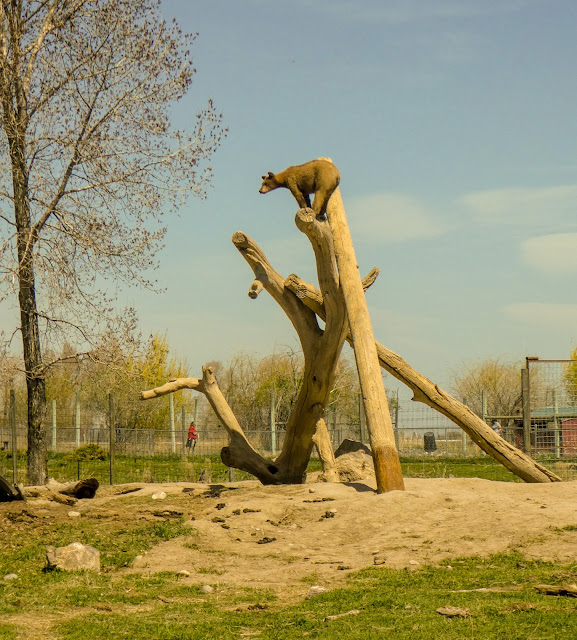 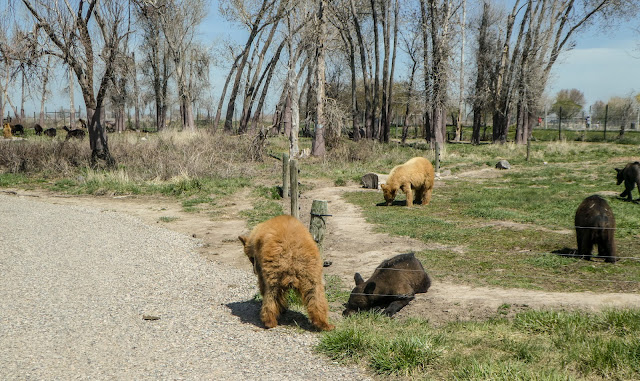 We had the privilege of driving right behind a feeding truck: 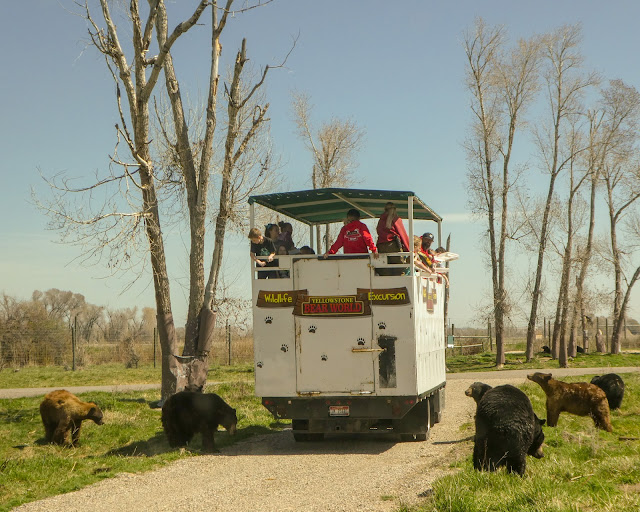 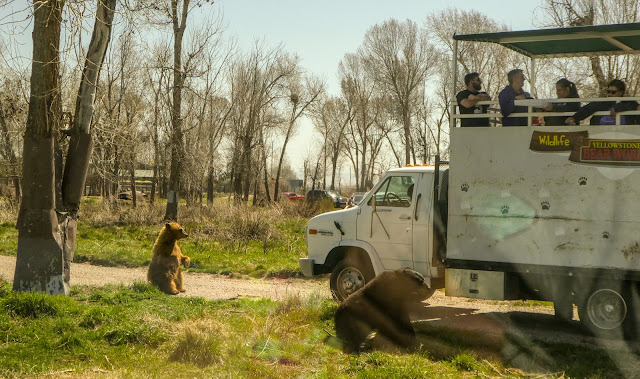 After our little safari ride, we went to the visitor's center, petting zoo, and amusement park where the kids had a blast together. I didn't actually take very many pictures, but Rachel was running around snapping pictures of everything (including duck poop) on her camera and Emily and Morgan got some pictures, too.

Here's a picture of our four oldest kids in the...whatchamacallit (comic foreground? tintamarresque? (we have no good word for this in English)): 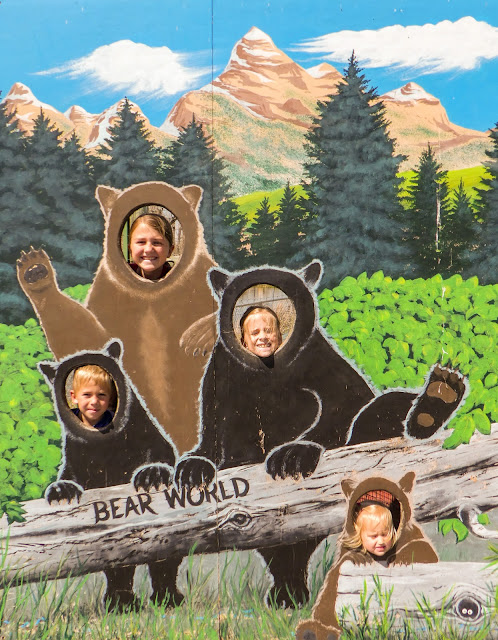 And here are a few of the petting zoo...

Benjamin was unflappably brave. He was petting everything in sight without hesitation. He was walking alongside deer, stroking them, as they were trying to run away from him.

In 2010 I mentioned something about a pregnant goat at the petting zoo. Well, I was (probably) wrong about that because we learned (at the Museum of Life and Science (which we all miss something dreadful)) that pygmy goats bloat when they eat

Grandma gave each of the kids a handful of feed and they had fun running around and throwing it at feeding the ducks. Here's the back end of Maren and Zoë feeding some ducks (it was hard to get a picture of anyone's face at the petting zoo because all the kids were running helter-skelter the whole time): 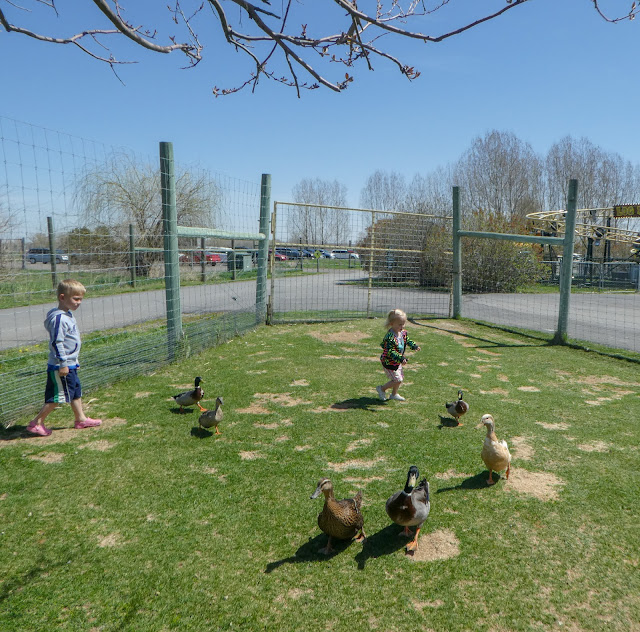 Zoë was so sad when a worker told her that she didn't think the ducks wanted to be pet right then. She stopped short and stuck her bottom lip out in the biggest pout and then shuffled over to bury her face into my legs. Poor thing (poorer ducks; they're tormented all day long, I'm sure).

There's a big bear statue at the entrance of the petting zoo. Here are Miriam, Alexander, and Benjamin on it: 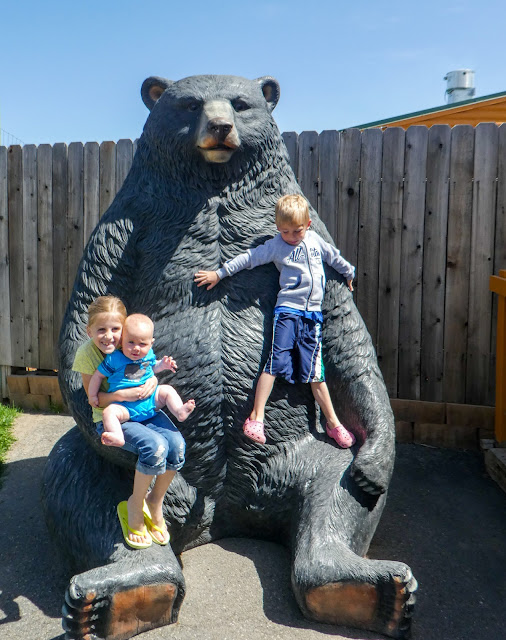 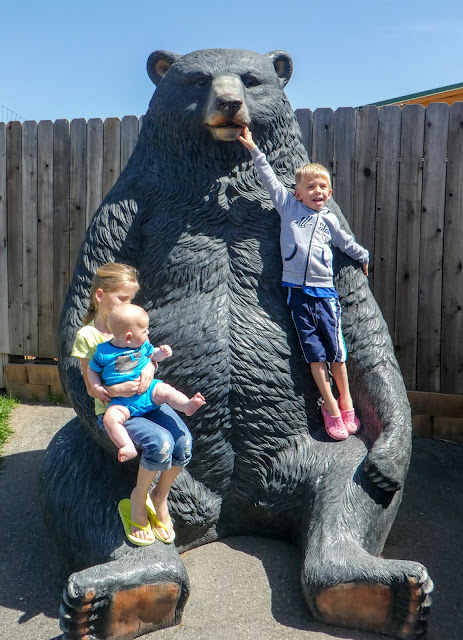 And here's a picture of nearly everyone (minus Morgan, Grandma, and Daddy):

The kids were rather excited about the rides. It was pretty crowded so we'd originally told them that they might be able to ride a few rides, but the lines moved quickly enough and they ended up riding them all.

Here we are on the train: 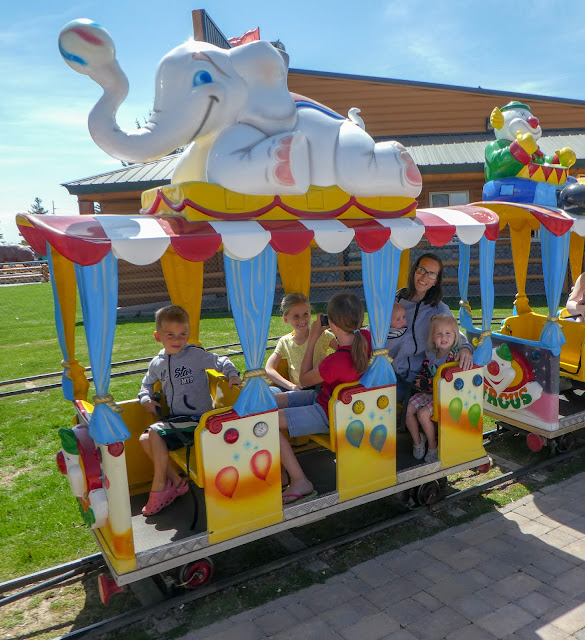 Oh, and the spinning bears (barf): 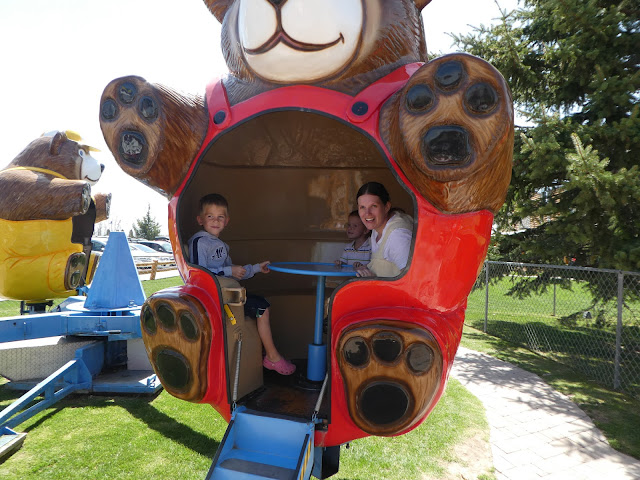 Emily went on with Benjamin and Gavin and I went on with Zoë, Rachel, and Miriam. I am not the biggest fan of spinning rides (like the tea cups—no thanks). The general spininess of the ride is fine with me, I suppose, but the whirling that can be accomplished by spinning that wheel? Just no. 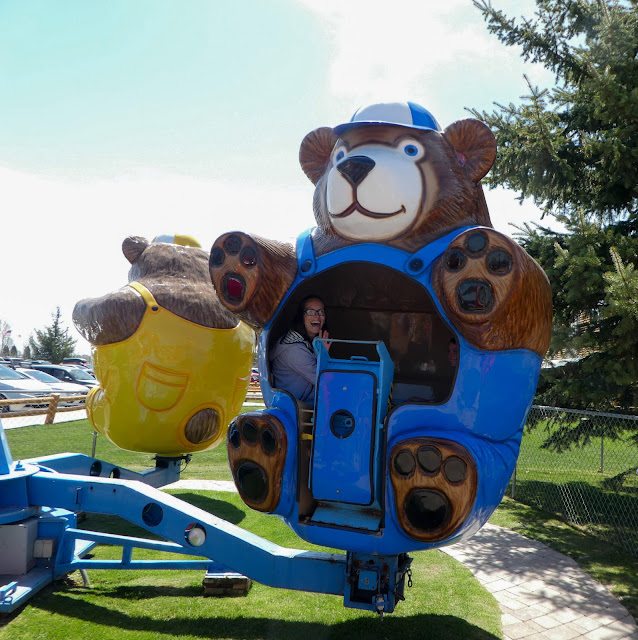 We didn't do a whole lot of spinning because Zoë didn't ever quite understand that she should let go of the wheel in the middle and kept being dragged into my lap by it.

The kids all seemed to enjoy these little cars quite a bit. Here's Benjamin and Gavin: 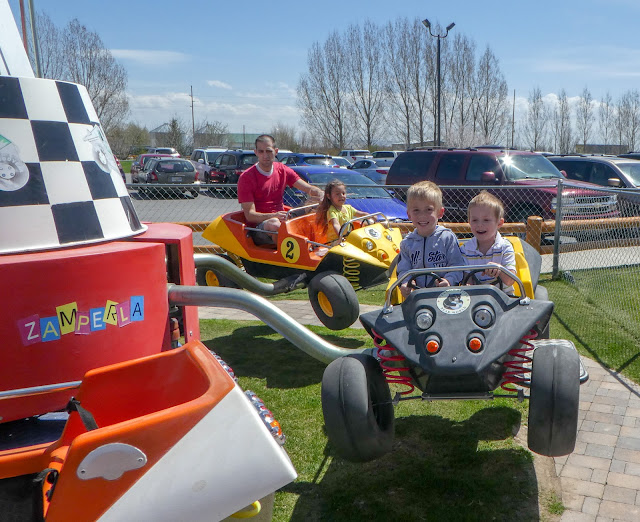 And the girls together: 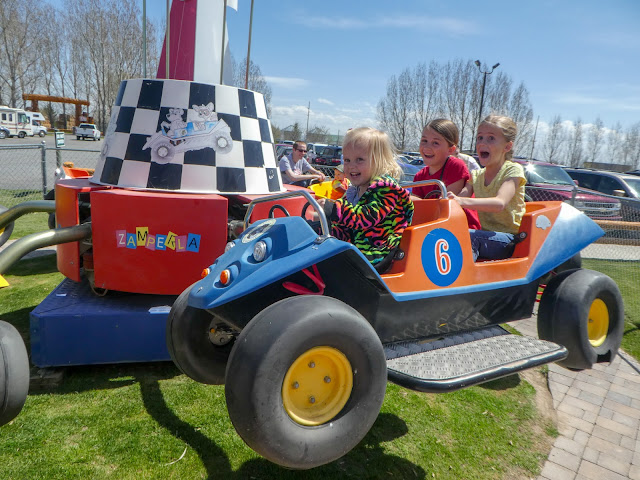 Technically Zoë wasn't tall enough to ride without an adult, but only a couple of cars are allowed adults in them, so the person in charge said she could go ahead and ride with her sisters—who were in a seat with a broken seat belt! That also didn't seem to alarm the employee working the ride (and, I mean, I let them go on it, obviously...but still).

Here are the boys going by again (they were having so much fun together): 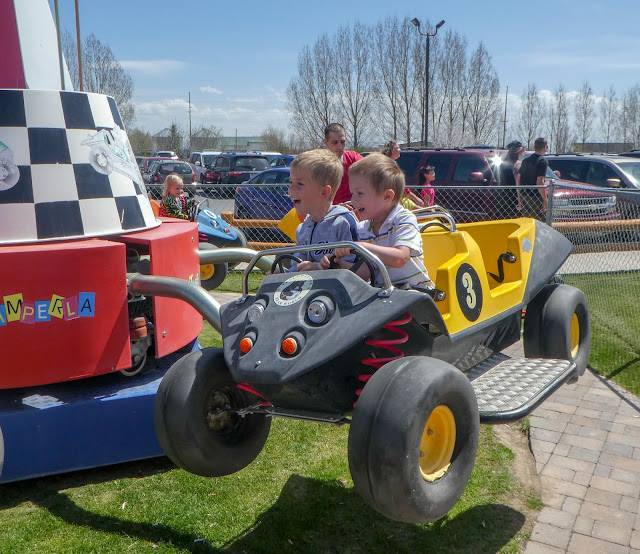 Benjamin and Gavin also went on the roller coaster by themselves. It's a new-to-us roller coaster; I guess they replaced it in the last eight years. I don't have any good pictures of that (I took off to find a bench so I could feed Alexander and then the camera died) but I'm sure someone else does (and, you know, of everyone else who rode the roller coaster as well).

When he got off the roller coaster, Benjamin noted that he had one ride left to try and wanted to get in line right away but I wanted to watch Zoë go with Dadddy, so I told Benjamin he could go stand in line by himself. So he did.

I went up with a few of the kids once and Andrew took these four up again (I think I have more pictures on Rachel's camera): 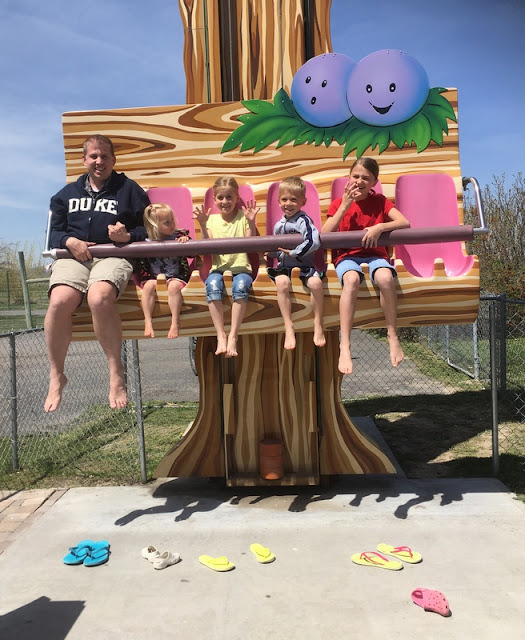 I especially love how they all took off their shoes neatly beneath them...except for Benjamin, whose pink crocs are flung who knows where (well, one of them is obviously in the picture but the other one is...elsewhere).