One day a week we help tend Riley while his dad is at work. Technically, Grandma tends Riley, but it's so exciting when cousins come over that where Riley is Zoë is also, so it ends up being a bit of a group project (which is fine). He's a sweet little boy, but oh! Riley Days are hard.

Whether it's a good Riley Day or a difficult Riley Day, we know that Zoë will be supercharged with emotion. I think it has something to do with competing with Riley for the two/three-year-old slot. She has to compete with him for everything (and he with her). There's no awe between them. Zoë doesn't look up to Riley like she does to, say, Gavin or Benjamin—the big kids! Nor does she have compassion on him for being a little kid, like, say Alexander or Arwyn.

Riley is her equal, her peer. She loves him and she has a lot of fun with him (and he with her). But their relationship is also quite...dramatically charged.

So we just know that Riley Days mean an increase in toddler tantrums. And that's fine. Because figuring out life is difficult for everyone (perhaps especially two/three-year-olds). On Riley Days we blow off Zoë's influx of emotion with a shrug and an, "Oh, she's just having a Riley Day."

With that preamble, let me show you last week's Riley Day, which was a lot of fun!

Zoë and Riley played in the backyard together while Benjamin was at school. They rode bikes and swang (is that right? it's late and swang feels funny but I dunno...it's late...) on the swings and hung out in the teepee together: 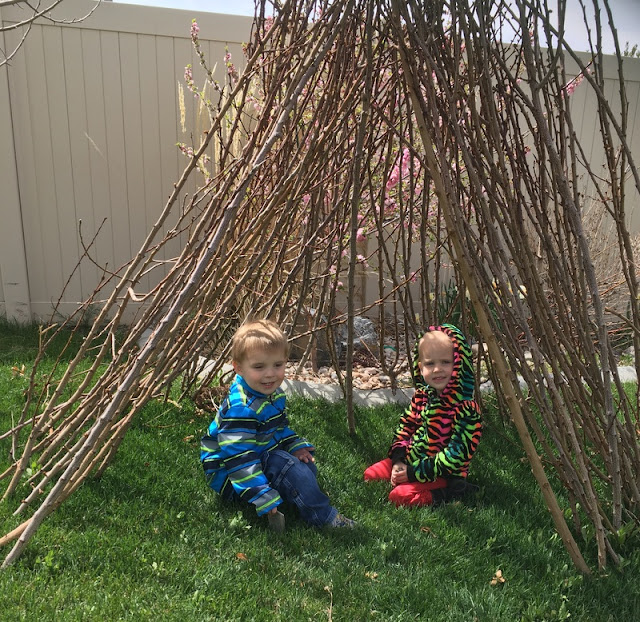 We went to pick Benjamin up from school a little early so that we could play at the park for a few minutes. I don't often stay after school to play at the park these days because I have another little charge to get home, but on this particular day her mom texted me to say that she was going to have someone else pick up her daughter. That meant we were free to play at the park after school, too, so we did because it was a beautiful day!

Alexander took his first slide, which he seemed to enjoy...ish: 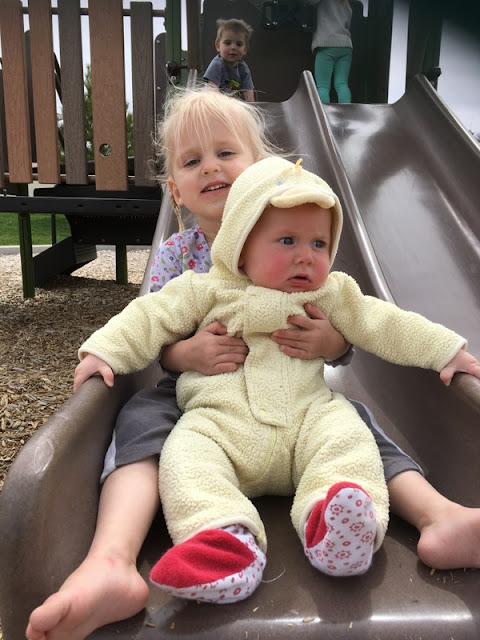 And he also went in the merry-go-round thing with the kids, which he seemed to enjoy less: 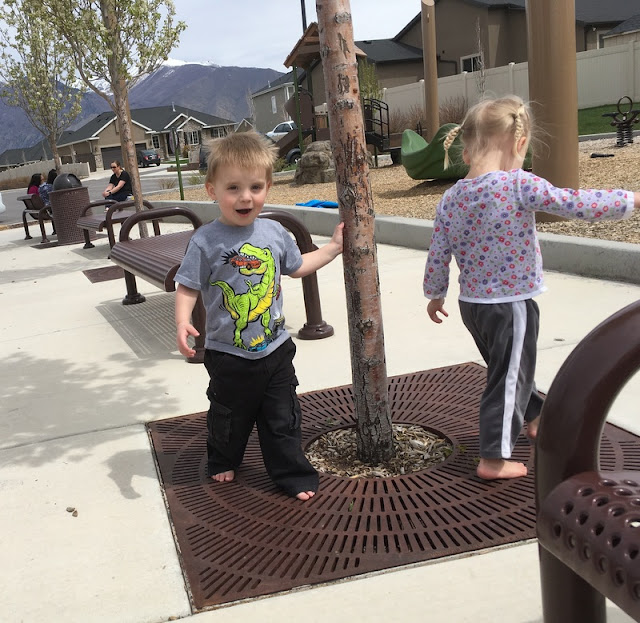 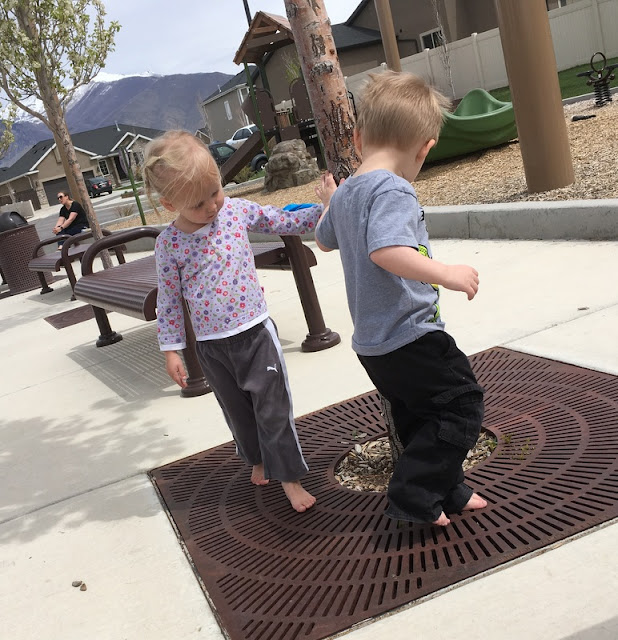 ...and hugged every fire hydrant on the way home. 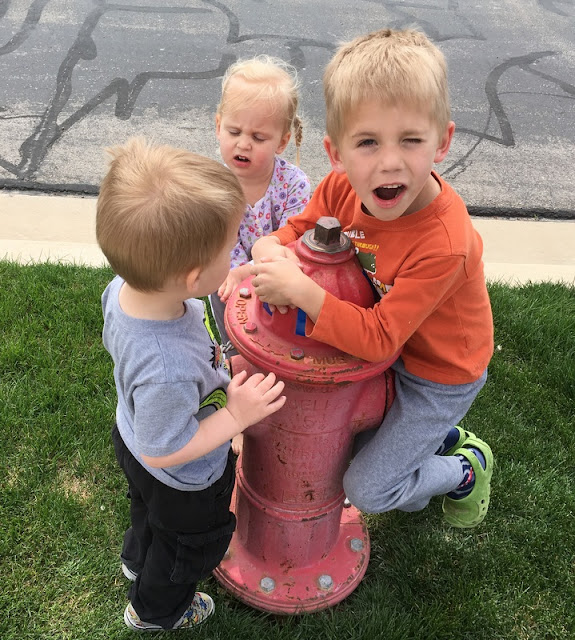 ...where, in a fit of insanity, I broke out the water beads Auntie Josie sent home with Zoë a couple of weeks ago (the kids had a blast and Grandma and I tried not to be driving too crazy by beads bouncing all over the floor). 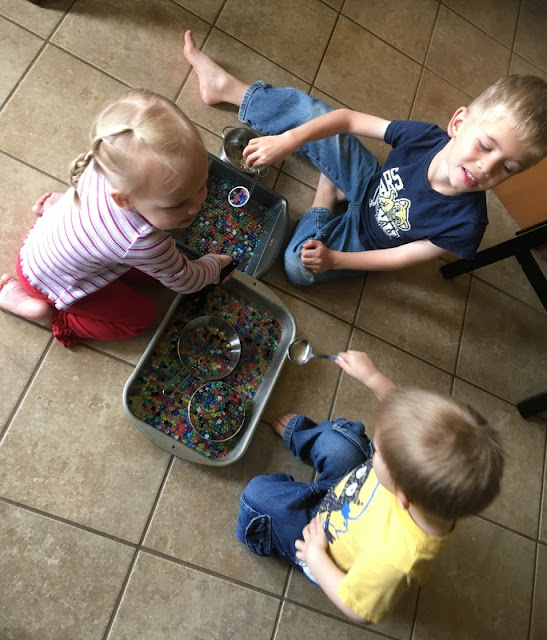 There were a few tense moments, some shrieking, some tears, but all in all it was a pretty great Riley Day!

Parenthood, however, seems to be full of dichotomies, so it will probably come to no surprise for you to find out that today was an awful Riley Day.

Like, remember when I posted just a few days ago that my patience had been ruthlessly drained from my body, that, and I quote, "I tried a lot today and was tried a lot today. It was simply a trying day."?

Okay, now let's go back and laugh at my past self because that day? Was a walk in the park.

Today? Today was a trying day.

Andrew offered to get the kids off to school so that I could sleep in today and since Alexander decided to sleep in, too, I took him up on it. By the time we got up, the big kids were gone and Zoë and Riley were playing happily in the basement together. So Andrew left for campus and I settled in to nurse Alexander and then to pump.

I could hear the kids crashing around in the basement—the distinct sound of the Duplo bin being dumped out, the roller coaster zipping along its tracks, the door to the play house slamming shut over and over again (our basement playroom is a veritable heaven for children)—and then...silence.

Silence is never a good thing, and I know this. But pumping is annoying and so I wanted to finish (real quick!) before I went to check on them. Because (TBH)* trying to get a second letdown isn't always easy (TMI).* So I finished pumping as fast as I could, which, I mean, it isn't like this is something that can be rushed. I mean, it just kinda happens the speed it happens (TMI again, I'm sure)* and then I rushed downstairs with my milk...just as Grandpa was coming upstairs to inform me, "There's been a tragedy in the basement. Oh, and, watch out. There's thumbtacks on the floor."

He had been in his office (he works from home) and was also keeping an ear on the sounds of Zoë and Riley playing nicely together. But then things went quiet and all he could hear is paper rustling, which he thought was weird because...how did they get paper?

So he left his office to see what they were doing and...

They had destroyed the playroom so well that it was no longer fun to play in (childhood law states that the only good room to play in is one you can mess up) and had moved on to greener, tidier pastures: Grandma's newly finished, newly organized craft room.

They emptied every cupboard that they could reach (thank goodness there wasn't a stool in there)!

The crinkling paper Grandpa heard? Sewing patterns. Everywhere. All over the floor.

We got it all cleaned up and did some stern talking and everyone survived and maybe we learned some lessons, but the day just kind of continued in that vein.

Like, for example, it's possible these little ones smashed one of Grandma's yard ornaments to smithereens this afternoon. And there was, for sure, a whole lot of screaming and crying from the both of them. About everything.

When I was picking up Benjamin from school—with Zoë and Riley in the double stroller and Alexander in the front carrier—Zoë spotted Hannah's mom with Hannah's triplet three-year-old siblings.

"Wow!" she said. "That mommy has two kids in her stroller! Oh! I see another one! She has three!"

And I thought to myself, "Thank goodness it's not every day. And thank goodness they're not all three years old."

Imagining having three three-year-olds every single day for an entire year (you know, before they turn four) helped me feel so, so grateful that I only have to deal with two three-year-olds one day a week (with other adults in the house to spell each other off). My hat goes off to this mom (every time I see her (figuratively, of course, since I rarely wear a hat)).

Grandpa also told me a story about someone he knows with twins. And the mom went to Costco and got the biggest thing of eggs available—like a hundred eggs—and she had unloaded the eggs and the twins from the car and then went back to get more groceries but was distracted by a neighbour and by the time she made it back inside...well... Eggs! Everywhere! All over the kids, all over the table, all over the kitchen, tracked all over the house.

"So we can just look at this mess," he said, before returning to his phone-in meeting, "And be grateful it's not eggs."

* To be honest/too much information.
Posted by Nancy at 2:40 AM