We did it—baby and I—we survived a full semester of gamelan! It certainly wouldn't have been possible without a lot of outside support, mostly child-tenders: Josie and my mom who took turns pacing the halls of the HFAC with Alexander during rehearsals, Grandma and Grandpa for helping with the kids at home, and Andrew, of course, for making his schedule work with mine and getting dinner on the table and the kids into bed every Thursday and Friday, not to mention my kids being on their best behaviour both when they accompanied me to class and when they were left at home.

At lot goes in to getting Mom off to school, so thinking about ever going to graduate school (a dream that's been on the back burner for the last decade or so) has my head spinning. This was just a one credit class and...oh, boy! It was enough!

(Of course, it's a fine arts class, so that one credit hour translated into four hours of rehearsal every week. Silly fine arts credits. I honestly don't understand why they are the way they...)

Tonight we performed at BYU's Evening of Percussion, which was so fun! We had a dress rehearsal in the afternoon so it made for a bit of a long day, but I went back home with my mom for dinner and to let Alexander nap so that broke the day up a bit. The poor little guy had had enough after dress rehearsal and couldn't believe we were going back to campus for more. He screamed for Auntie Josie the entire time we were performing (which was quite a while because Odradek alone was more than twenty minutes long). I could hear his cries echoing through the halls the minute we left the stage area so I sprinted towards them until I found that little stressed-out pair (Alexander because "where's Mom?!?!" and Josie because Alexander wouldn't stop crying). He was quite happy to see me.

Anyway, Andrew took some pictures from the audience (he brought Rachel, Miriam, and Benjamin to watch; Zoë stayed home with Grandma and Grandpa). Oddly enough, he sat right in front of my dad's cousin Jolene—she was there to watch her son Jordan play with the Panoramic Steel group. She recognized our kids and said hello to them by name, which threw them off because they certainly didn't recognize her (when's the last time we had a Duggar reunion?—let's do one this summer)!

Anyway, I am in the very back in the middle (behind those tall guys in the middle) and my mom is on the right sitting on the risers...

This was during a piece called Jaya Semara, by I Wayan Beratha. I'm playing on the jublag, which doesn't carry the melody (except for a "solo" part, which is more like a quartet so it wasn't even scary to play in the big ol' deJong), which is good because the melody is super tricky.

For Odradek, Who Earnestly Seeks Death, I played the suling (a bamboo flute) with my mom (and others, obviously). My mom and I are seated on the floor on the far right.

This picture shows some of the bamboo rattles (angklung) being shaken:

Odradek was commissioned (somewhat specifically) for our group after a set of angklung was found in a (somewhat) deserted stairwell of the HFAC by a fire marshal. They almost got tossed but instead were given another shot at being useful. No one knows exactly where/when/how they came to be in that stairwell, but they're ours now (ours meaning Gamelan Bintang Wahyu's). If you're wondering how there could be a deserted stairwell in a bustling university's fine arts center, well, then it's clear you've never set foot in the HFAC. That building is a veritable maze.

I was so proud of myself for finding my way to the deJong green room without getting too terribly lost!

And here are all three percussion groups on the stage: 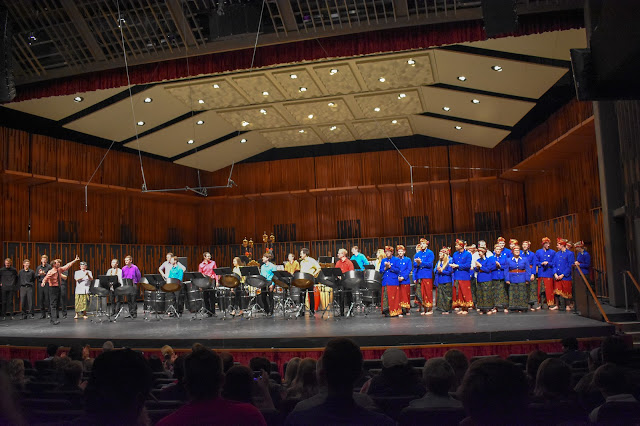 After the concert Andrew (and the kids) came up to take a few pictures. Here's me with my mom and Alexander, the Gamelan Baby: 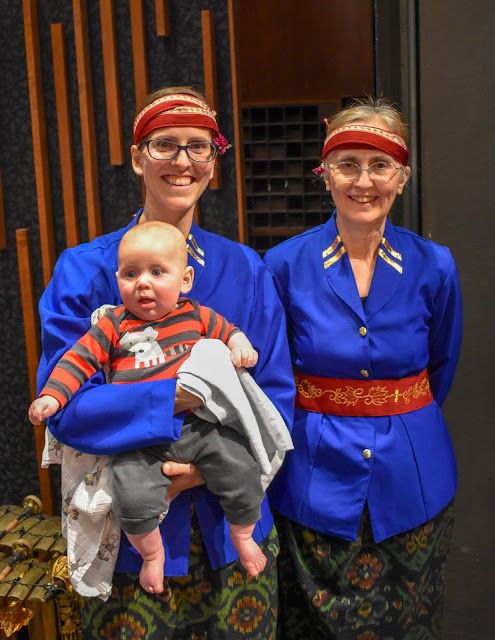 Here's Alexander pretending he's happy to be on campus at 9:30 at night (he wasn't): 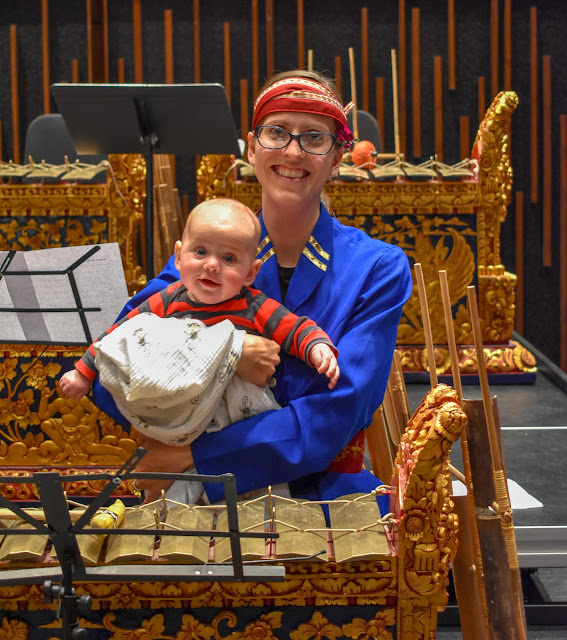 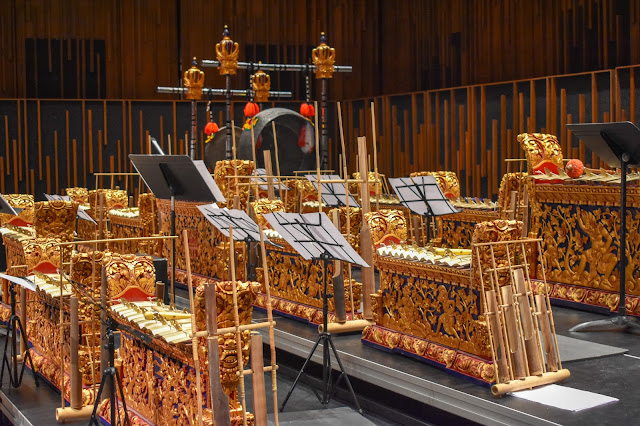 The front of the instruments: 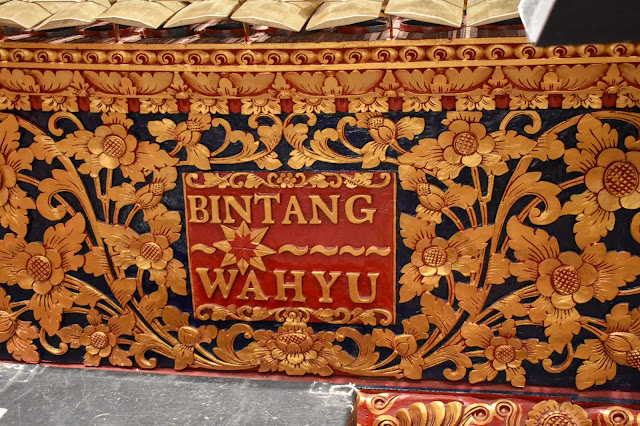 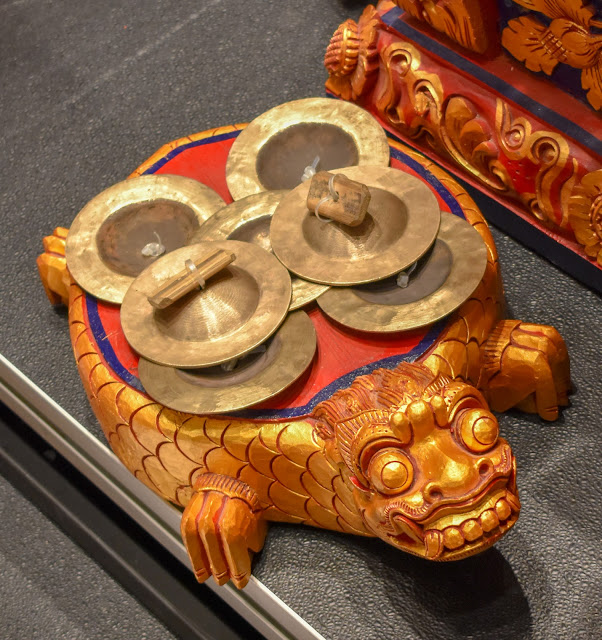 And these are actually the personal instruments of one of our guest artists, Gavin: 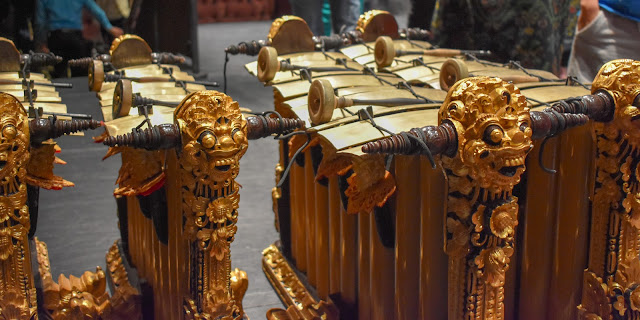 I really enjoyed the Gender Wayang selections (that I didn't play) and Jaya Semara. Odradek is growing on me but I wouldn't say that I love it yet (and it could probably stand to be about half as long). It sure was fun to work with this group and learn how to play the jablag and suling!

I'm not sure if I'll brave joining another collegiate ensemble again in the near future (Gamelan Baby doesn't like gamelan; gamelan makes Gamelan Baby fussy) but I'm certainly glad I got the opportunity to play with Bitang Wahyu this semester!
Posted by Nancy at 2:53 AM