We finally got around to getting the garden ready. I suppose that's one upside to having moved to a colder climate—a few extra weeks of procrastination (if we had waited until now to plant our garden in Durham it would surely have been too late for peas, but I think we're still within the window for this hardiness zone).

Here's a cute picture of Alexander and Zoë in the "car cart" at the hardware store: 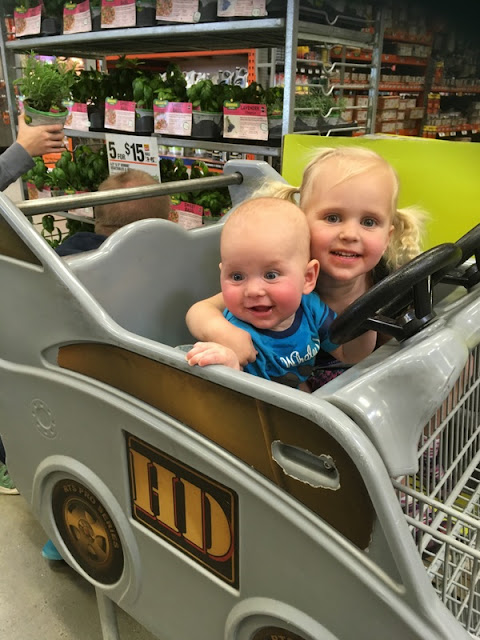 This cuteness didn't last and soon she was nearly strangling him to death (with love) so Rachel and I took turns carrying Alexander around and Benjamin hopped into the cart with Zoë.

We'd gone to a reunion for the Northridge 2nd ward (the 40th reunion, I think?) Saturday afternoon and had a great time. I didn't live in that ward for very long so was surprised with how many people I was excited to see again (and vise versa). My friend Tracy was even there! Her family moved to Maine like two days before our family moved back to Utah and their visit (to her husband's parents) coincided with the reunion. The Conrads drove down from Idaho, so I got to visit with them for a few minutes (they're cousins of mine). Then there were the Foleys and Johnsons and Wights and Zanders and Gillespies and LeBarons...so many good families.

The kids had fun playing with their cousin Kayl and eating way too many cookies.

And then we went to the store to get garden supplies.

So it was pretty late by the time we got around to starting the garden, but we managed to get the whole thing weeded and prepped and even got the potted plants into the ground (tomatoes and petunias mostly) before calling it good.

And suddenly, after writing that, I'm wondering what God really meant in the bible when he called his work good (in the beginning, you know?), because I've always read it as that whatever was being done was truly good (and—look around—it was; our world is amazing) but, I dunno...

After digging around in the dirt with five kids for a couple of hours, my calling things "good" was more like a "that's good enough for now" good.

As Grandpa so kindly remarked after spying on us for a few minutes, "Ahhh, a family that gardens together...screams at each other."

Anyway, we didn't have time to plant all any of our seeds on Saturday so I did (some of) that with the kids on Tuesday. Miriam planted colourful carrots in her garden plot—red carrots and purple carrots and who knows what else. She's also excited about her yellow pear tomatoes. Benjamin went with cherry tomatoes and peas. Rachel planted grape tomatoes and lettuce. She took her turn last because she was busy bouncing the baby while I was helping the other kids (Andrew wasn't helping because he was off in Miami, lucky guy).

By this time they'd had some friends come over and they'd run off to play, so it was just me and Rachel and Alexander and the garden.

Rachel, my most flatulent child, was squatting in her garden plot, carefully doling out lettuce seeds, her rear end poised above one of her petunias (it's good to mix flowers with vegetables because it encourages pollinators—according to this website, petunias are good especially by tomatoes, which is a happy coincidence for us (we only got them because Benjamin could not leave the store without pink and purple flowers)) when she let out a rip-roaring root-a-toot-toot...which we laughed about because we're both super mature.

"It's fine," she said. "Just a little extra fertilizer for it."

"Don't you mean..." I paused because growing up this word was strictly taboo in my house (we "fluffed" instead) and I still can't say it (or hear it) without cringing so it's pretty much still taboo in my house (though we "toot" now), but I also couldn't not say it because it's not every day a joke gets set up so well. "...fart-ilizer?" I finished.

"Wow, Mom," Rachel said, rolling her eyes a little (because she's far too cool to appreciate Mom/Dad jokes without at least first pretending we're totally lame (we are totally not lame (thus the pretending))) before dissolving into giggles with me again.

And thus we see that a family that gardens together, sure, screams at each other a little bit ("That was MY shovel!"), but also establishes inside jokes that are sure to resurface for years to come.
Posted by Nancy at 1:43 AM