Dying easter eggs (and dying of the stomach flu)

Between sessions of general conference on Saturday we helped Grandpa prune the fruit trees and pile the branches. The kids wanted to make a teepee out of the branches but mostly gave up after tying three of them together, so I did the bulk of the work for them, thinking, of course, that it would provide them with hours of imaginative play over spring break. I would be wrong in this regard, of course, but anyway...

Naanii and Uncle Patrick came over between the second session and priesthood session so they could help me help the children dye Easter eggs (Daddy had gone up to Grandpa Frank's house in Salt Lake to watch priesthood session). It was nice to have some extra hands on...hand. 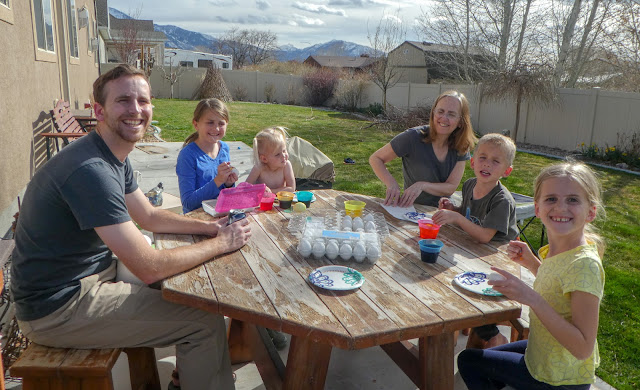 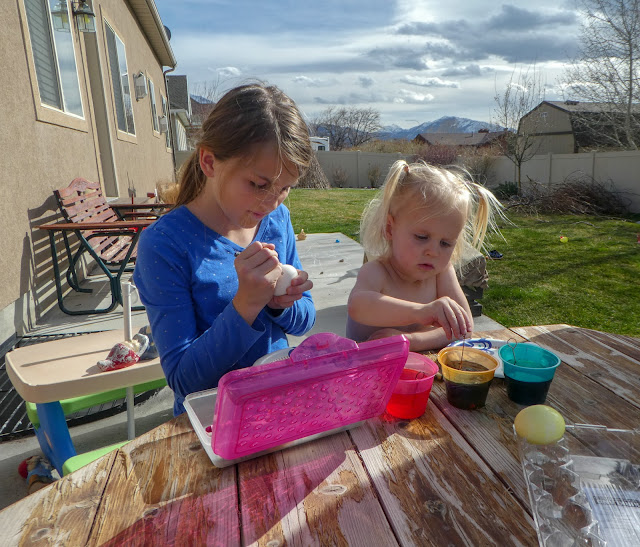 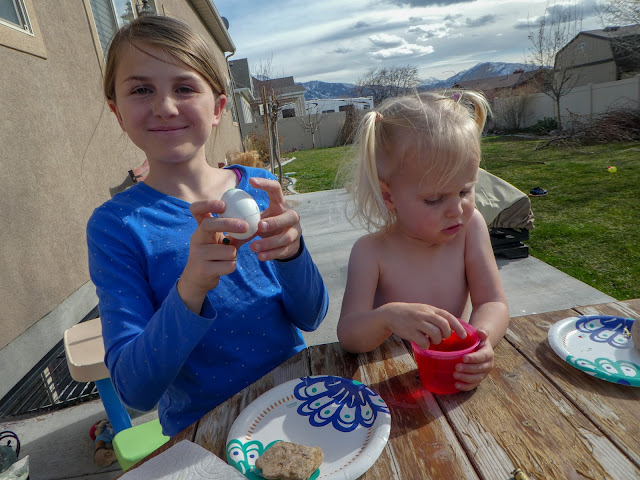 Zoë and Benjamin sailed through their egg allotment, plunking them willy-nilly into cups of dye (and not realizing, though they'd been told, that once their eggs were coloured, that was that). Zoë dropped each of her eggs at least once. Benjamin was a little more careful. Rachel and Miriam took their time designing eggs. 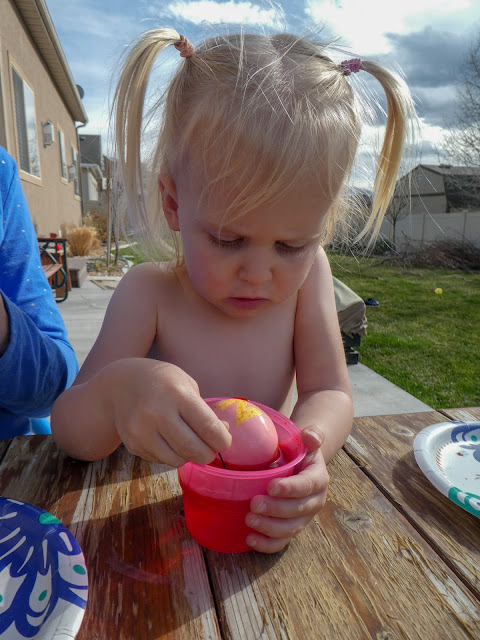 Even Patrick got in on the fun, picking out the pre-cracked eggs and drawing bandaids and sad faces on them: 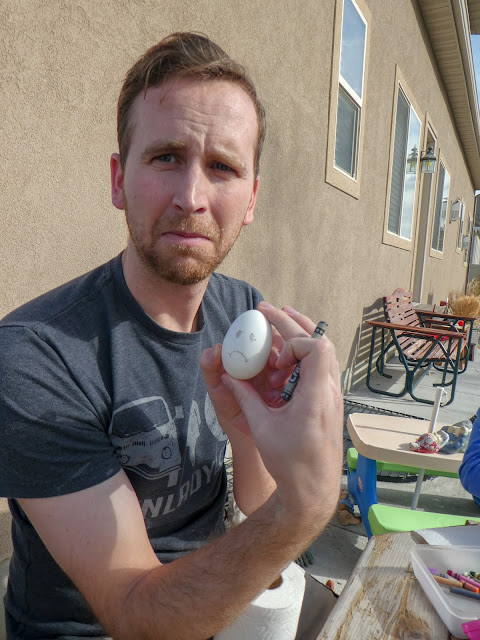 Luckily, after the kids each did five eggs we still had several leftover (I wasn't quite sure how many people to divide the number of eggs between) so I told them they could do a few more. Miriam opted out of decorating extra eggs in order to play in the teepee (so it got some use after all!). 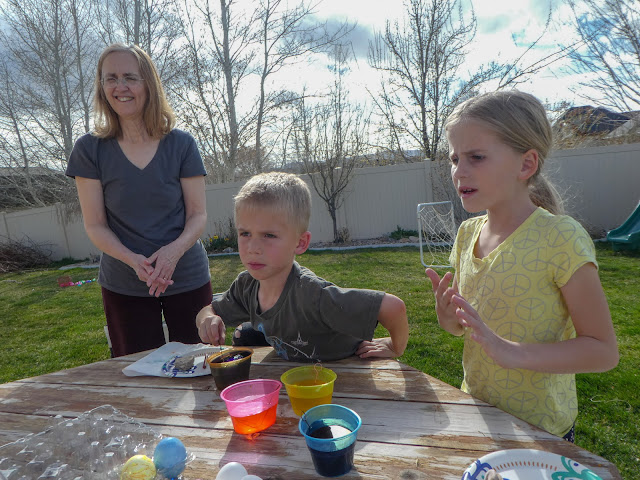 The rest of the kids were excited about extra eggs, though! 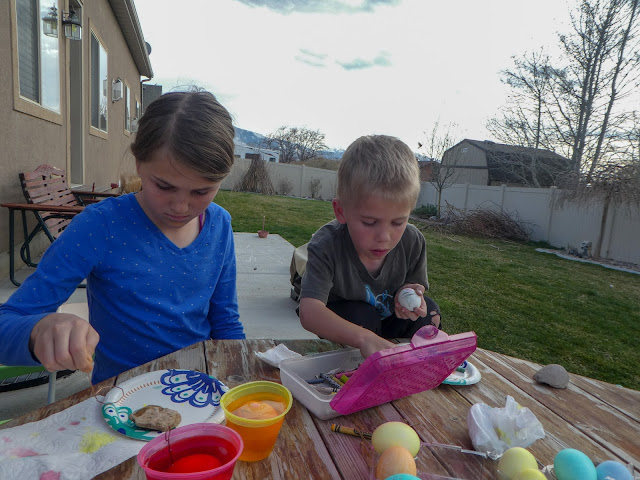 Here's Alexander, up from his nap: 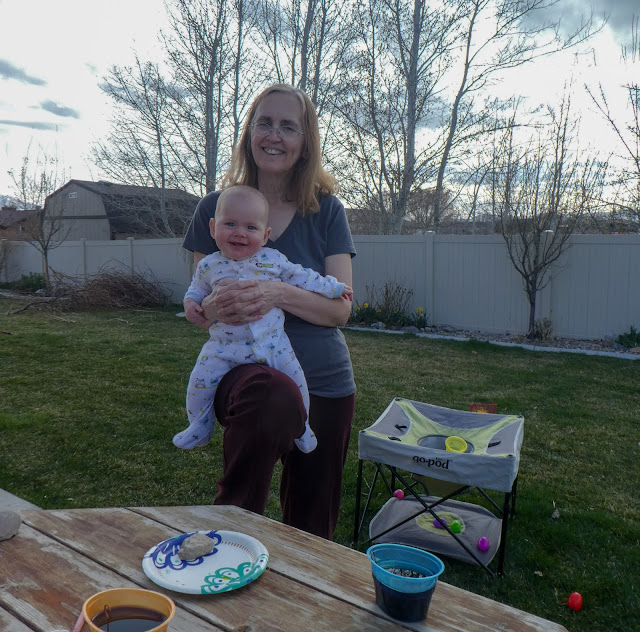 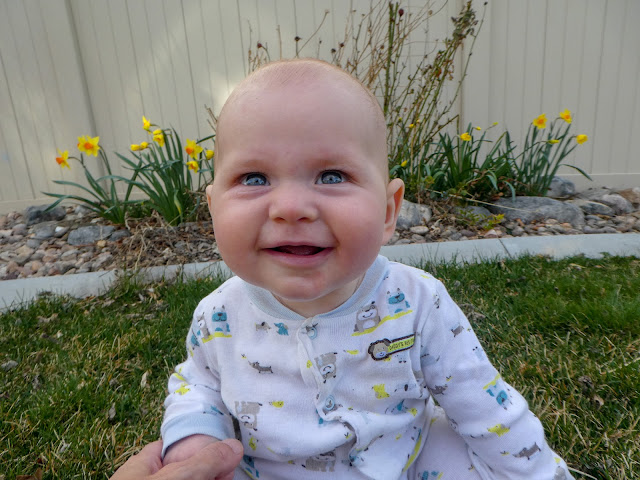 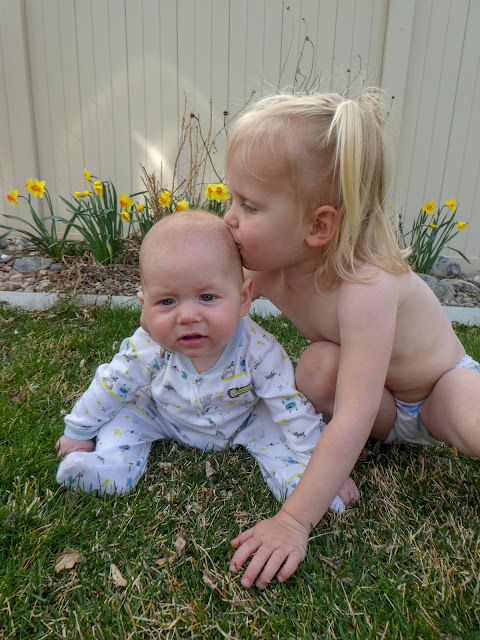 And knocking him over: 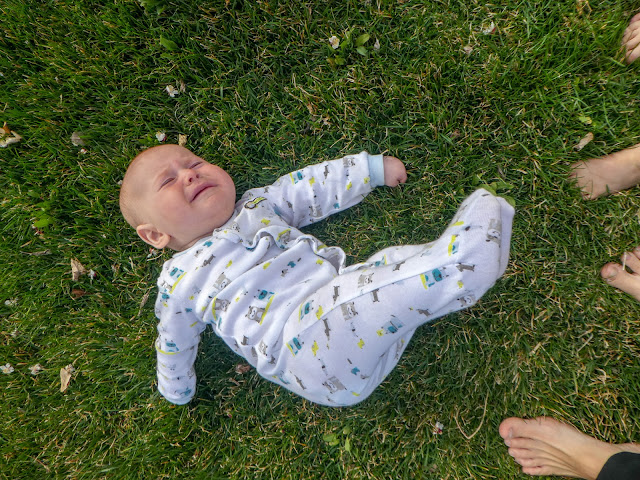 And here he is trying out the teepee: 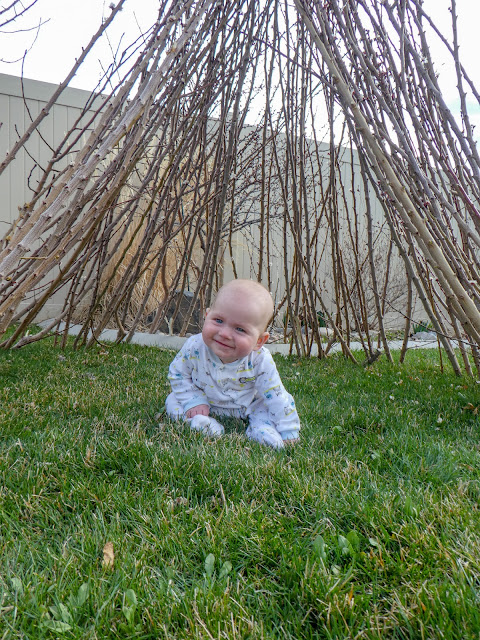 And being loved on a little too hard by his sister again (this is a rather common scene at our house): 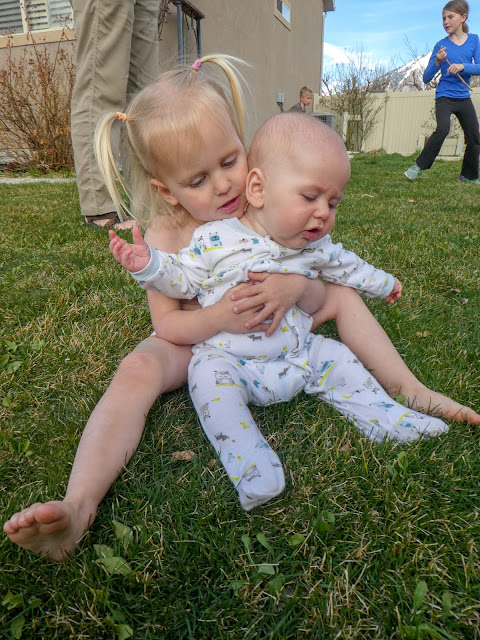 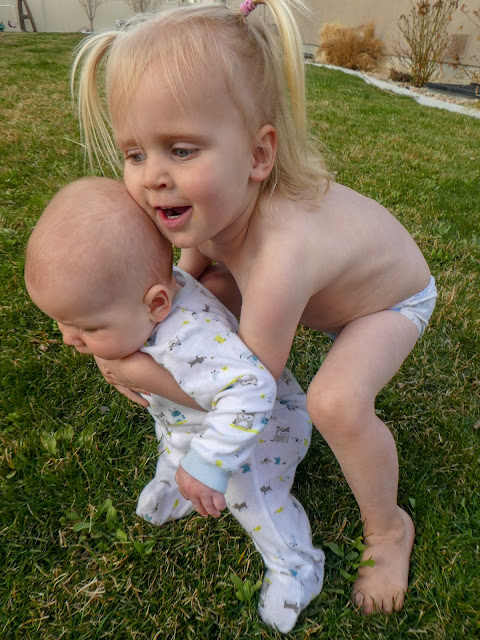 He doesn't seem to hate it too much (until, you know, he's had enough): 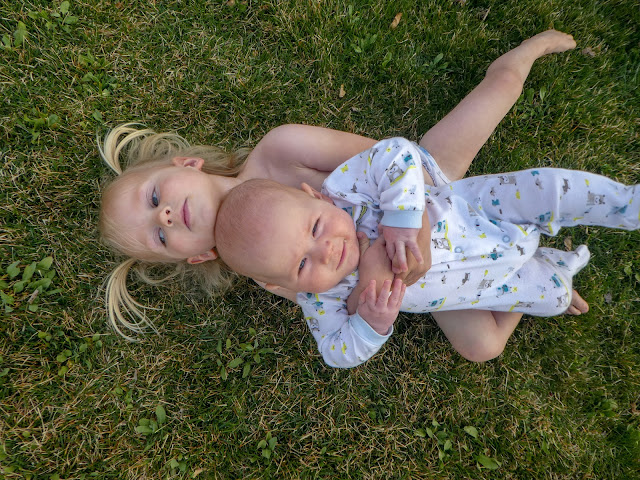 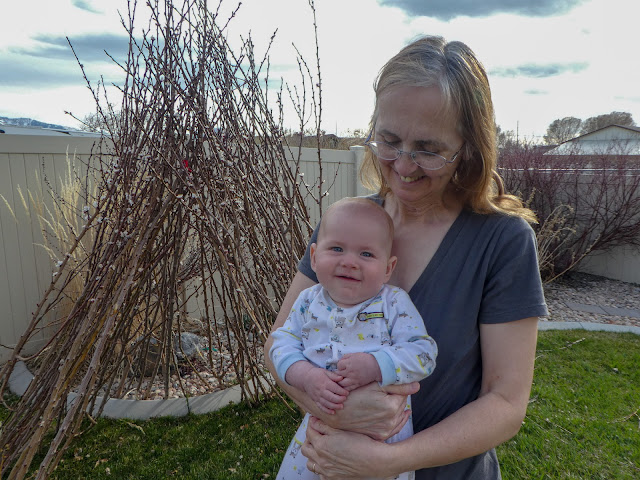 Here are the kids standing by the little spit and camp "fire" they made by their teepee: 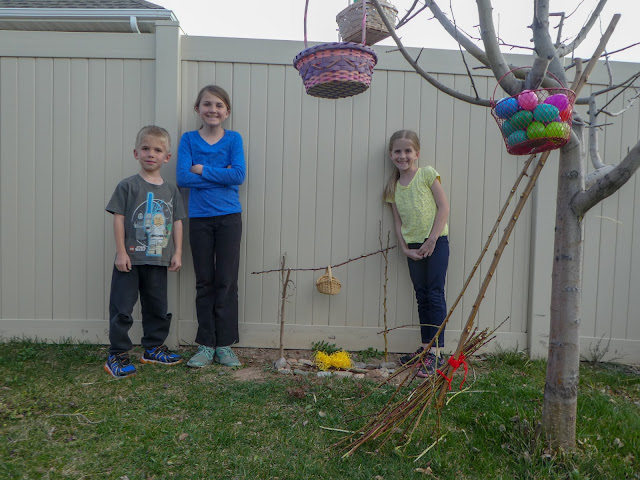 They did have quite a bit of fun playing with all the branches on Saturday, that's for sure! 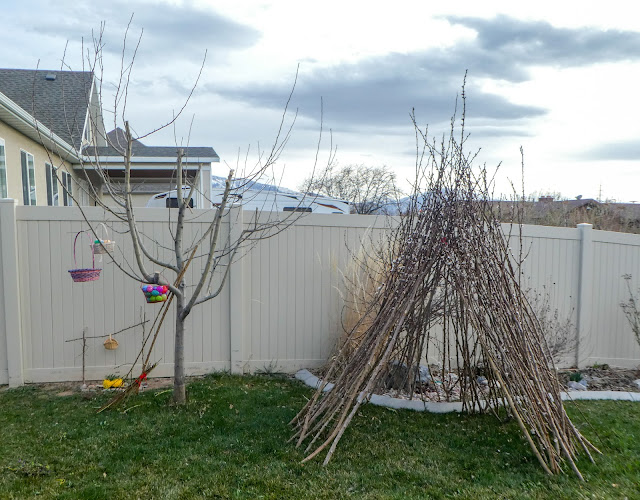 Sunday was a busy day with conference and family over for Easter dinner, though I think the kids did play in the backyard for a while with Kayl. But that was the last the teepee saw of the children all week long. The scooters barely made it outside, either.

Diana, as I mentioned, had been here visiting with her children (helping out her sister with some newborn twins recently placed in her care) and on Saturday she came scurrying home to our place just as my mom and Patrick were leaving because James had thrown up. She felt terrible because she didn't know he was feeling sick and didn't mean to expose those sweet babies to his tummy bug but she also didn't want to get us sick. Being sick (or having sick children) is terrible enough, anyway, but doing it while you're not at home is even worse.*

That poor boy was a throw up machine and kept his momma up all night long.

Audrey, who I hadn't managed to make friends with, finally decided (in a fit of desperation) that I could hold her. Diana was busy getting James settled and starting a load of washing and carting things inside from the car. Audrey was toddling around after her, trying to get picked up, but when her efforts proved fruitless she toddled over to me and held up her arms. So I picked her up.

She clearly wasn't thrilled that I was the one holding her, but she also didn't fuss to be put back down, so...I win! 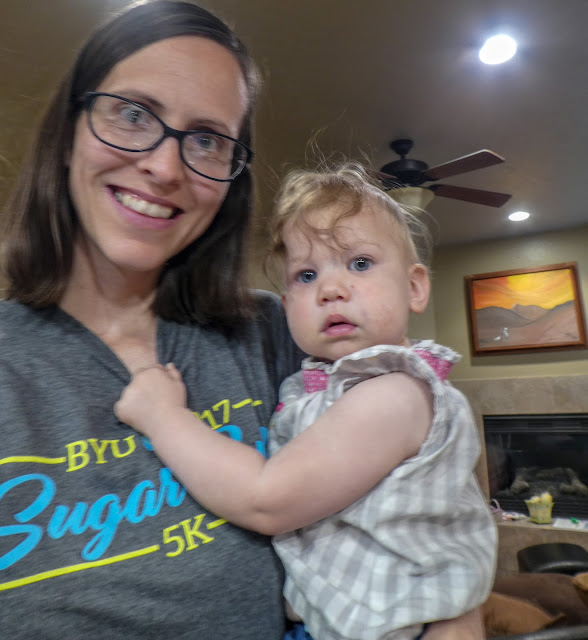 Anyway, James was sick on Saturday and Sunday. And then Audrey got sick on Sunday, which carried on to Monday, I'm sure (though Diana decided to brave the drive home anyway).

And then Benjamin was sick on Monday through Tuesday, Zoë was sick Tuesday through Wednesday, Rachel was sick Wednesday through Thursday, I was sick Thursday through Friday (as was Grandpa), Miriam threatened to be sick Friday through Saturday, but though she went to bed looking rather pale her iron stomach pulled through and no one threw up on Saturday. So that was a good day.

Andrew is out of town, anyway (though he was in town while the little ones were sick, which was so great because they weren't very good at finding the toilet/throw-up bucket and Andrew is phenomenal at cleaning up vomit), so I hadn't planned much for spring break, but instead of the lazy stay-cation I had imagined—children frolicking under blossoming trees in the backyard, racing around on their scooters, strolling to the park for a picnic or two, perhaps even (and we're getting kind of crazy here) visiting a BYU museum—we spent all day, every day, inside vomiting (and consuming far, far too much television).

But, I mean, like, we're probably better off for it, right?

Because a family that's sick together...sticks together! Or something... 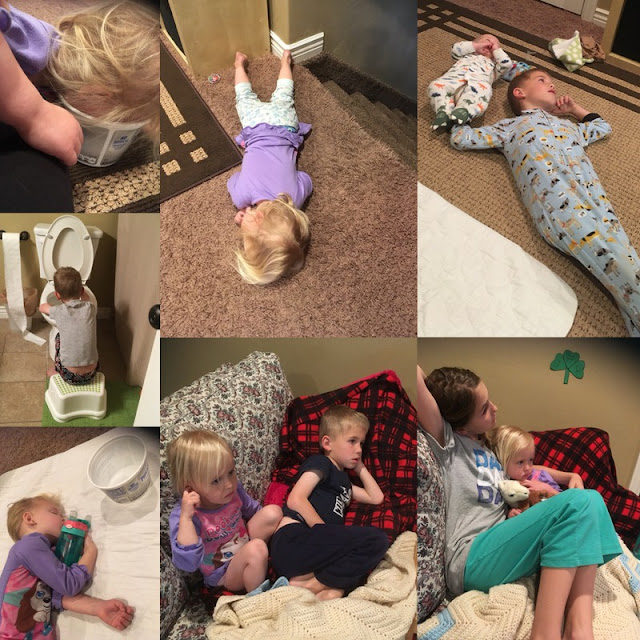 * Remember that one time we visited for Christmas and gave everybody hand, foot, and mouth disease? Yeah. Those were some good times. [insert laugh-crying emoticon here.]

So, no judgement from me, Diana. No judgement from me. We will take your germs anytime if it means spending time with you and your cute kids! (Also, I have happier posts to come, with pictures of the kids enjoying each other, just sayin' (because I don't believe in posting anything chronologically, apparently)).
Posted by Nancy at 2:43 AM