On Saturday morning (May 5th), we headed up to Calgary (pronounced /CAL-gree/ or /CAL-guh-ree/ if you're local (never cal-gary)) to visit with my niece Amy and her daughter Scarlett. This was my first time meeting them, so it was rather exciting.

My sister was rather young when Amy was born and was subsequently placed Amy for adoption. I was only eight at the time and wasn't privy (or even aware) of all the dialogue prior to the making of this decision, but I'm sure it was a painful and complicated decision to make. I have no doubt, though, that it was a positive decision for Amy's future. She was adopted by a wonderful couple!

Though it was technically a closed adoption (not that that was necessarily what was desired, but it simply was (I feel like open adoptions are more common nowadays (having contact with one's birth family seems healthier, mentally, than having no contact) but this was the early nineties and it was what it was)), my mom knew the name of the family who had adopted her.

Several years ago a cousin of ours ended up being Amy's leader in Young Women (our church youth program for girls 12–18), which spurred on some letter writing (to Amy's adoptive parents at first) and eventually to an online relationship (hello, Facebook) and finally a formal meeting and...now we're family again. And it's great! My family has visited with her each time they've gone up to Alberta and she even came down to Utah with Scarlett a couple of summers ago.

But I missed all of that because I was busy living in North Carolina, so this was my first time meeting her! It was fun to get to know her a bit.

She remarked that everyone is always telling her how much Scarlett looks like Scarlett's father (which I totally disagree with because I think Scarlett looks so much like Kelli did when she was a little girl) but that she can see that Scarlett must look something like our side of the family as well because she fits in with her cousins so nicely (technically my children are Amy's cousins and are first cousins once removed with Scarlett but we do so enjoy blurring generations in my family—Scarlett falls between Miriam and Benjamin). 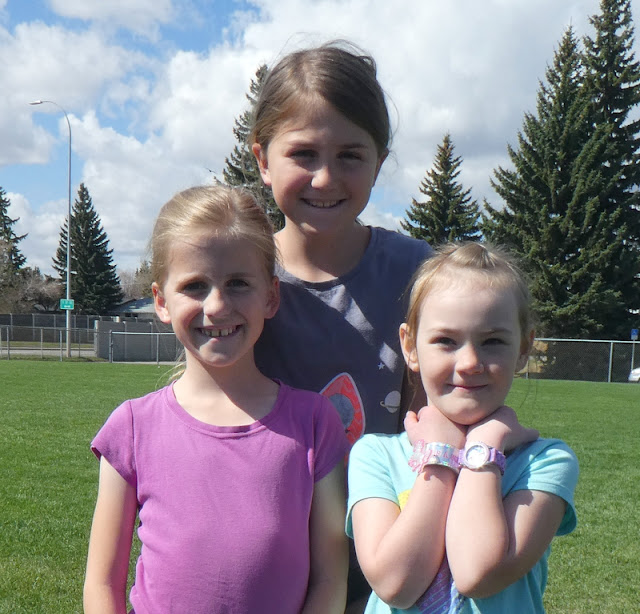 I noticed how similar Scarlett's voice is to my own children's voices because when she would call out, "Mom!" my mommy-sense went on high alert, just as it does when my own children call out my name. I could filter out all the other children at the park, but Scarlett sounded like my own. You know what I mean?

Like, when you're sitting blithely in Relief Society and children are fussing all over the place, but then whoever is pacing the halls with your fussy baby walks past the door and you hear the baby and you just know it's yours even though there are, like, a billion other fussing kids around? That.

Here's a picture of my not fussy baby, the current youngest grandchild (I hope there will be more joining the family...just, like, not from me) with my mom and Amy, the oldest grandchild (I think that ranking is pretty well set in stone). They're about twenty-four years apart: 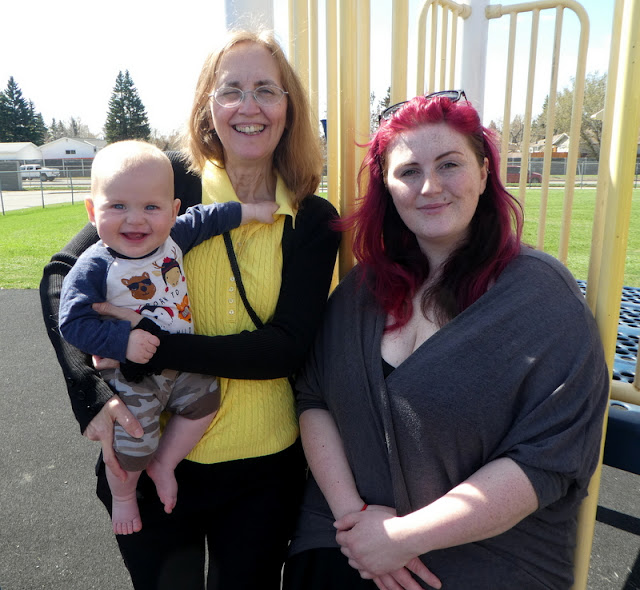 The girls had fun monkeying around together: 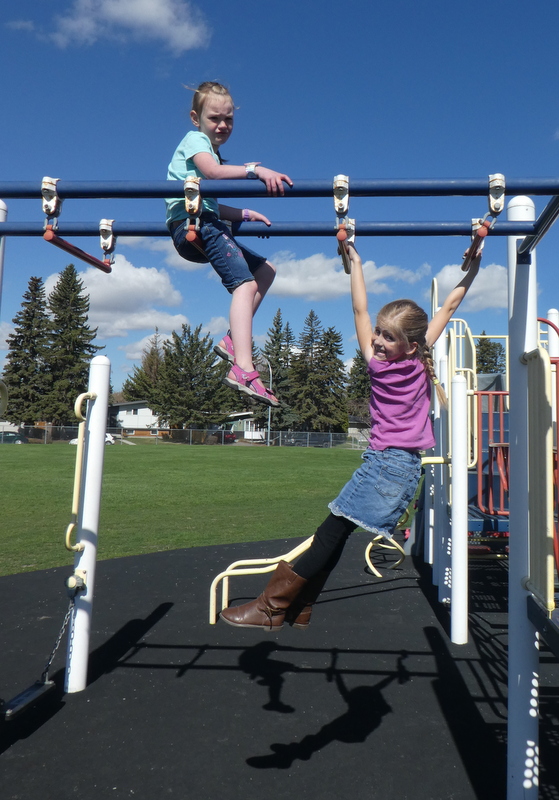 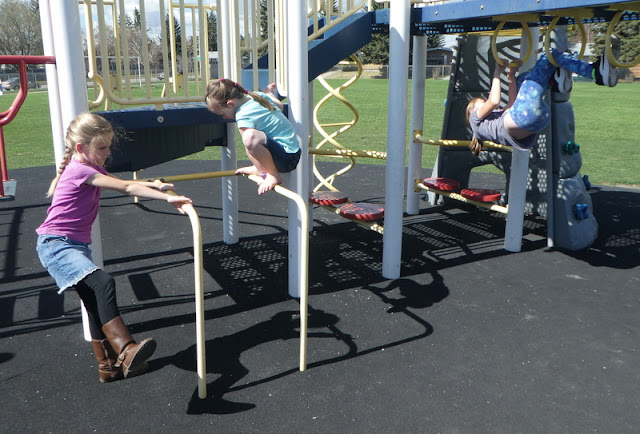 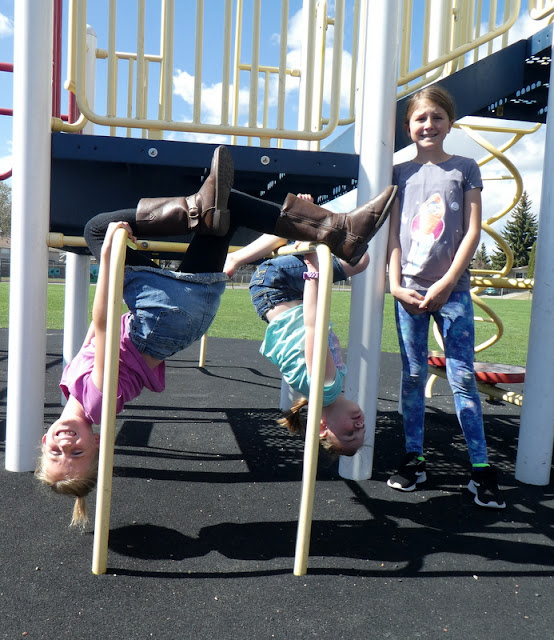 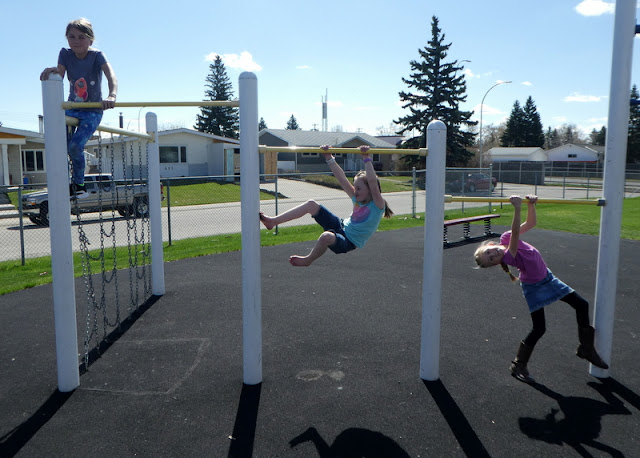 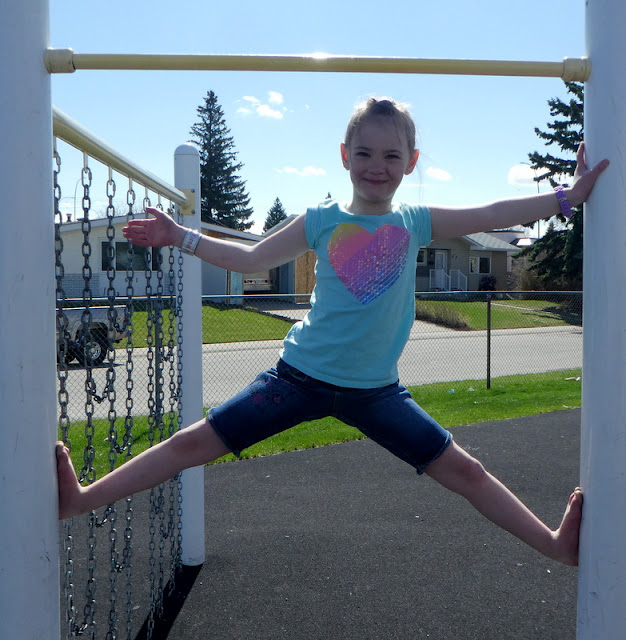 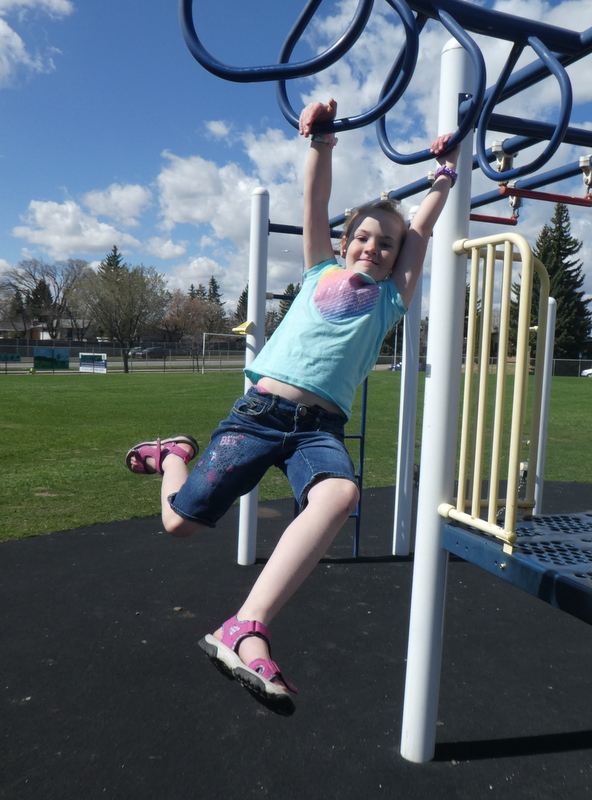 Here's Rachel overseeing some of the adult conversation: 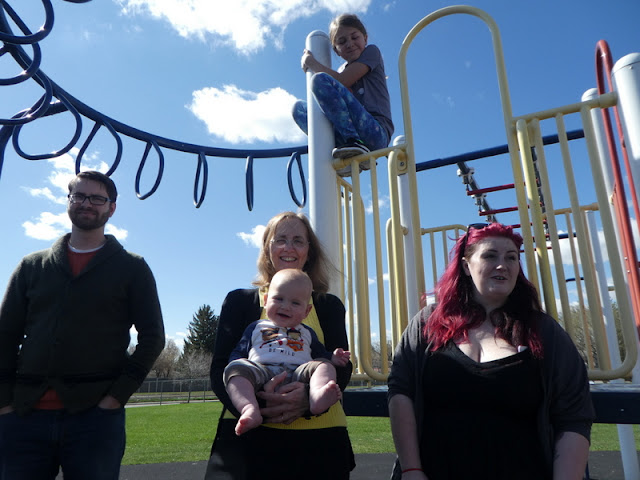 Auntie Abra was concerned about Alexander's bald little head (I don't know why...it's not like I've ever burned it (twice))... 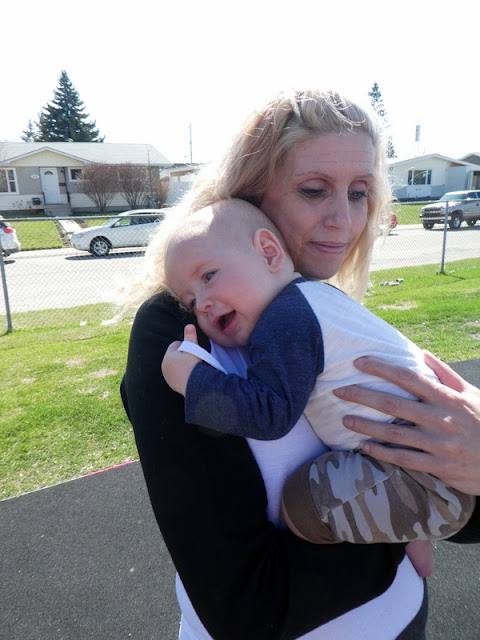 ...so we fashioned a super trendy bandana for him out of a burp cloth since I'd left his sunhat in the car (we walked to the park). It was perfect because his shirt says "born to be wild" and he ended up looking like a cute little biker dude. 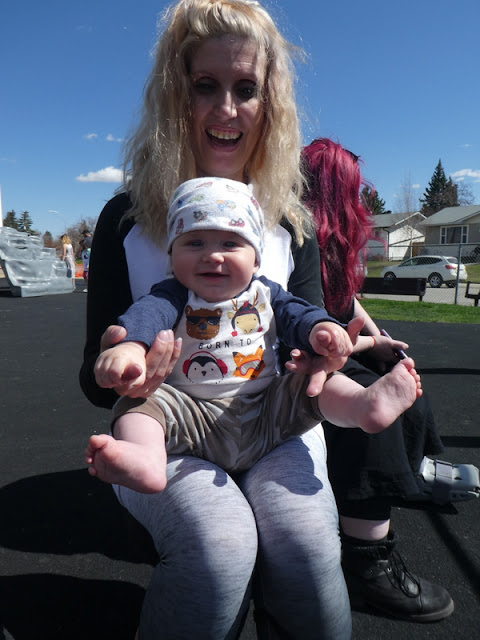 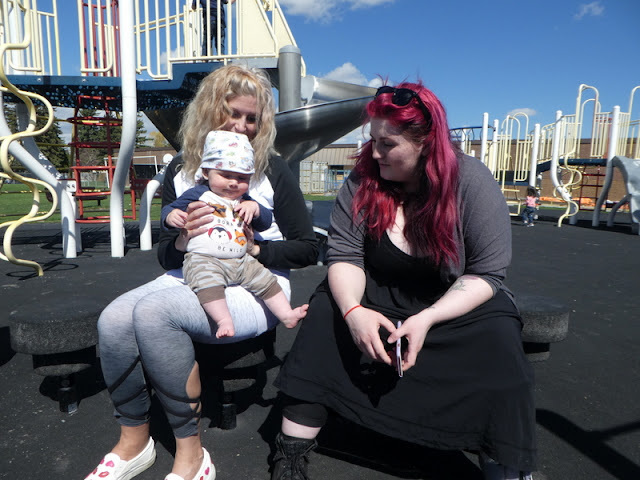 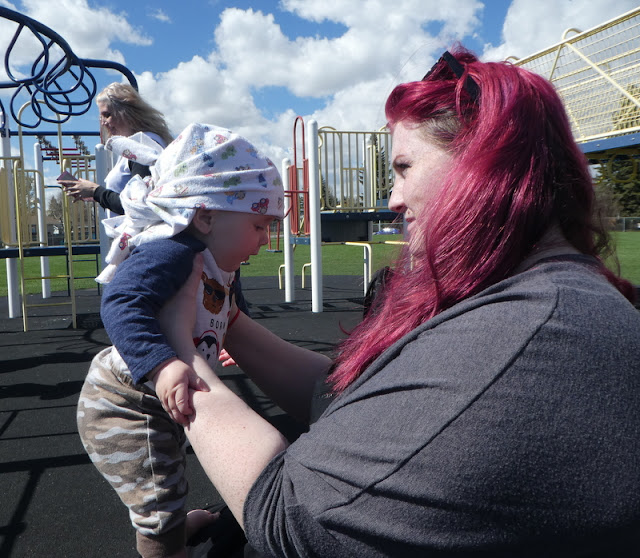 Here's our little group all together (Amy's sweet mom took the picture):

Here's the little cousins together:

Given the nature of weekend trips, we weren't able to visit terribly long, but it was fun getting to know Amy and Scarlett for a little while. Amy's mom said that she really appreciates my mom's heroic efforts to keep the family united (and I appreciate that about her, too), but Amy's mom is just as wonderful! She's using her air miles to send Amy and Scarlett down here for Rosie's wedding this summer (which means (a) that I'll get to see Amy and Scarlett again and (b) that Rosie is getting married, which is just crazy).

And here are a few pictures (that I didn't fit in above (obviously)) of Auntie Abra and Uncle David playing with my kids... 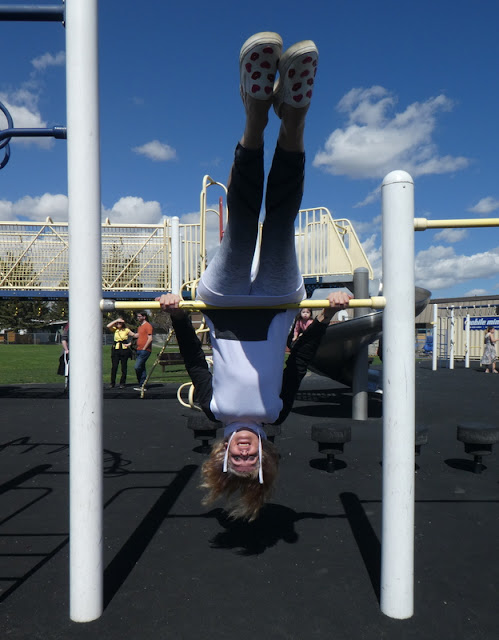 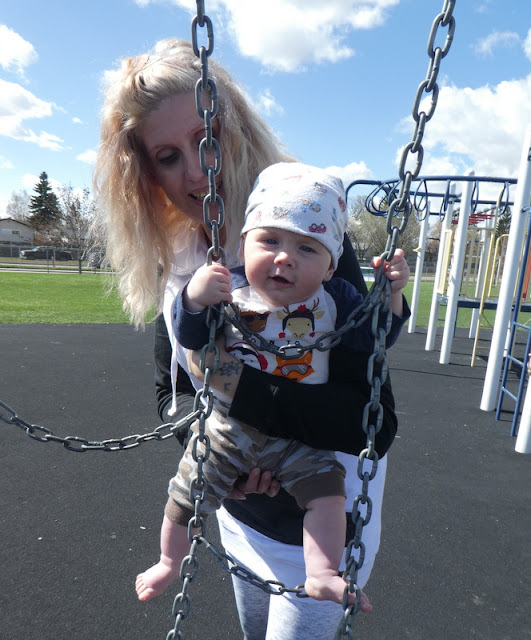 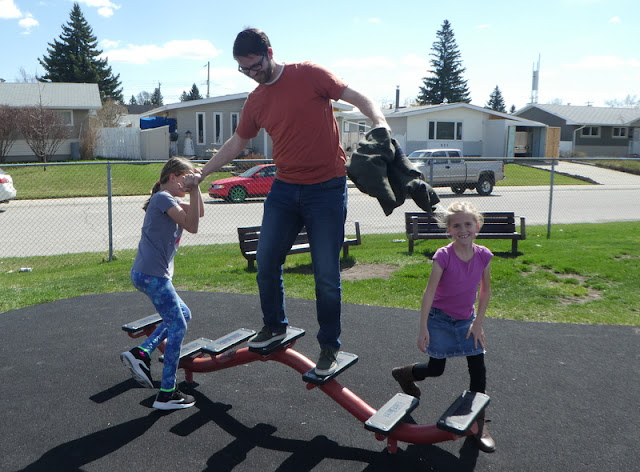