Zoë is among the grumpiest of babies/toddlers/preschoolers to have ever graced the planet (and one day she'll just have to own that fact).

Though cute as a button, she was born scowling at the world. We had a short honeymoon period and then—BAM—colic hit, hard. According to Wikipedia, colic is defined as "episodes of crying for more than three hours a day, for more than three days a week, for three weeks in an otherwise healthy child," and is most likely to resolve by six months of age. "Rarely" will it last up to one year (I'm fairly convinced Zoë falls into this category; in all honesty, it's possible she's still colicky).

While we were away (in Durham for Andrew's graduation, which is still on my list of things to write about) and Andrew's parents were holding down the fort for us, Grandpa noticed that Zoë screams in her sleep.

"Does she have nightmares?" he asked.

"Probably," I shrugged, "But she doesn't ever really seem frightened by them. I imagine her nightmares are along the lines of: she asked someone if she could do or have something and they said no."

She's a whole lot better now than she used to be. And I've had screamers before (I'm looking at you, Rachel). We'll get through this.

Just know that this is the face I wake up to every morning (even on her birthday):

No, she does not want to use the potty, thank you very much. She'll do that when she's good and ready.

Rather than a morning snuggle, she'd like to fake like she's going in for a hug and then headbutt you in the stomach instead. And you must let her do this otherwise...you're mean (duh).

Under no circumstances should you hint that she might need to get dressed. Or brush her hair.

Just get her breakfast, stat. And do it the right way.

Mornings can be rough over here (as can afternoons, evenings, and nights). Her grumpy condition earned her a few charming birthday greetings from her grandmothers this year.

On Facebook, my mom's cousin commented about this picture, saying, "That's not a very happy face for a birthday girl!" to which I replied, "She is the world's grumpiest child. (lol) This is a fairly normal look for her," to which my mom replied, "And this is part of why we love her so!"


"You are funny, passionate, silly, grumpy, lovable, chatty, playful, adorable, and so much more. And we love you for all of it!" Grandma wrote in her card.

I couldn't describe her better, myself!

Fortunately, she's finding more and more happiness in her world as she's finding her voice, gaining skills, and growing up. I have no doubt that she'll turn into a wonderful—even cheerful—person. We know people who were The Grumpiest Child of their families and they turned out just fine. Our friend April's mom likes to say that April's spirit was simply feeling frustrated by what her body couldn't accomplish. April's great...now...though it sounds like she was one heckuva toddler.

Zoë is fully capable of expressing joy, like when we told her that it was her birthday (she's been waiting for this moment since March when Riley turned three) and she realized the stack of presents on the table were all for her: 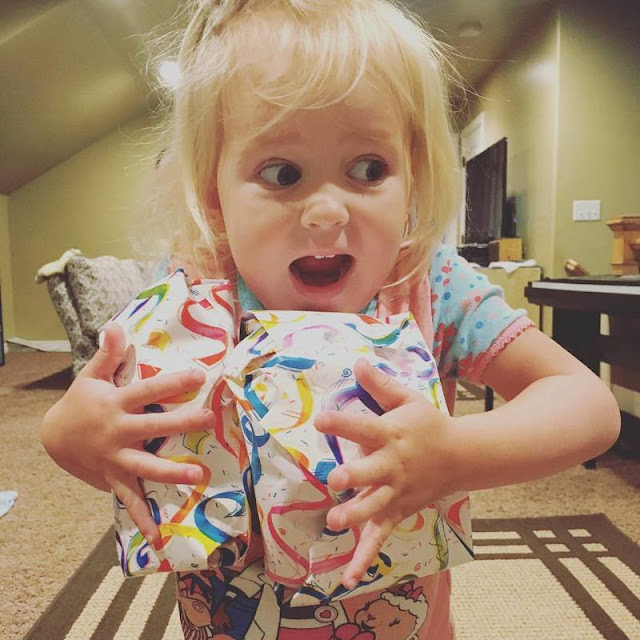 The day before her birthday, Grandpa told her, "Your birthday is tomorrow," to which she grumpily replied, "No! My birthday is in May!" She's really been quite patient (especially once she realized that it was already May but not yet her birthday—how?!) so I should probably get the rest of her birthday posts up quickly so that she can look at the pictures (one of her favourite pastimes (and a surefire way of calming her down from one of her sour moods) is looking at pictures of herself).
Posted by Nancy at 2:56 AM