Visiting what was once home nearly two decades after leaving it is rather surreal. Everything is different, but also the same. The differences, in this case, were heightened by the 2013 flooding.

Gone are the railroad tracks, the grain elevators, Extra Foods. But the lakes are still there, my (ninth) childhood home looks much the same, and many of my friends’ parents still live in the same houses they always have. New to the town is a Tim Horton’s, a few fun-looking playgrounds, several traffic lights and pretty much everything south of the highway.

Perhaps some of those things are not-so-new, but (as I mentioned) it’s been a while since I last visited. The town is about twice the size it was when we moved there (13,000 in 2016 vs 7,000 in 1996), though growth has been a bit sluggish in recent years (down to about 5% (from 15 to 30% in the nineties and early two-thousands)), probably again due to the massive flooding the town experienced in 2013.

Reflecting on the halcyon days of small town life, however, I’m  not sure that slow growth is a terrible thing. No traffic lights is a thing I could really go for! And while the town is small enough that it still has only one high school, it’s big enough that you actually have to specify which Tim Horton’s you’re visiting (because there are two of them—it also has two wards now (or a ward and a branch)). So it’s small by some standards, but bustling by others.

At any rate it was nice to get back for a visit, even if it was a quick one.

My sister lives quite close to our old High River house, just down the street from my friends’ parents. Since she lives in a basement apartment and had a couple of her kids and Uncle Patrick staying with her, Alexander and I stayed at the Lilburns’ with Auntie Josie and Uncle David (Naanii stayed at the Thompsons’ with Rachel and Miriam). It was nice to be within walking distance of Auntie Abra’s place, even if I was initially a little apprehensive about crashing at the Lilburn's. My friend had a rather strained relationship with her parents as a youth and filled my head with all sorts of ideas about how tyrannical her parents were. Turns out they're not the least bit tyrannical. They're super nice (so I'm glad that both she and I got to figure that out).

Uncle Patrick and I took the kids to the corner park, where Auntie Josie used to escape to when she was a toddler. She was such an escape artist! Our neighbors knew to keep their eyes peeled for her and when someone would inevitably come running from our house in a panic, they’d calmly point us in the direction of either the playground or (slightly more worrisome) the lakes.

It’s a pretty dinky playground but is perfect for toddlers. Alexander seemed to have gotten the most satisfaction from this outing.


Abra, Patrick, and I took the girls to see Piper’s play on Friday evening (which was our main motivation for taking the trip). Naanii, Josie, David and Malachi tended Alexander. They even ran to the store to get a bottle so they could feed him a bit of the milk I’d pumped (and he apparently took it well).

On Saturday morning we attended a ward waffle breakfast, prior to the ward joining in on the town clean-up day. It was a good thing that we did because I was a little confused about whether or not we were going to stay for church on Sunday—spoiler: we did not. At least we got to see a few people.

My mom observed that I spent most of my time visiting with Kaly (unpictured!) who was one of Abra’s peers while Abra seems to be better friends with Jocii now, one of my childhood friends. It’s funny how growing up works. Jocii is wonderful, but very different from me. Had we not been the same age we might never have formed an organic friendship. Kaly and I, who are a little more similar, never did anything together when I lived in town because of our age difference (about five years, which hardly seems like anything right now but was a huge barrier when Kaly was in her young adult years and I was just a kid).

My friend Jenn is back in town, too, living with her parents (she told me sheepishly). I told her that was totally okay by me—I live with my in-laws!

We were cutting our return to High River pretty close to dinner/show time so we stopped by Tim Horton’s for some dinner (and timbits). Everyone who had missed the show the night before went on Saturday night so it was just me, Uncle Patrick, the baby, and the girls. We met my friend Tyne at Sunshine Lake and had a wonderful visit. She just happened to be in town visiting her mom. 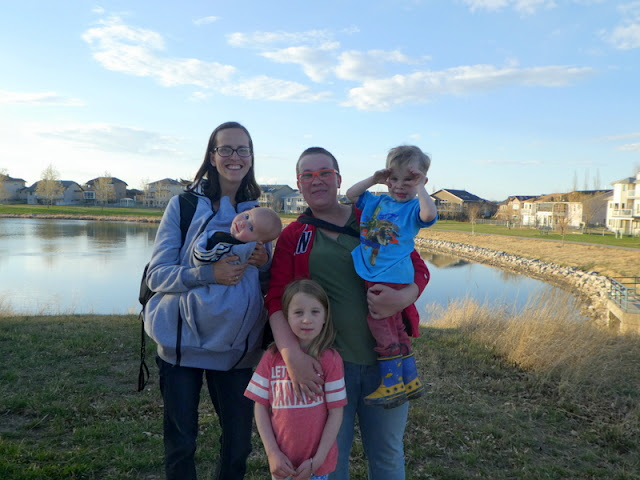 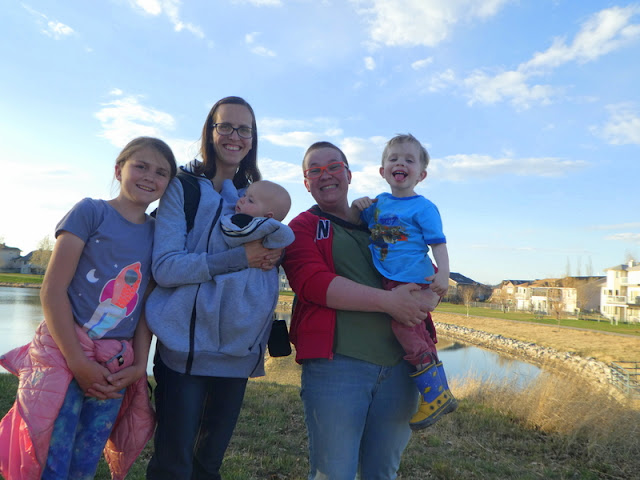 Rachel and Miriam played a game of hide and seek with Georgina while Gideon and Alexander enjoyed the baby swings. When they tired of the playground (which, I should note, was brand new to me; there was no playground at the lakes when I was living there) we went out on the little peninsula on the lake (also new (to me)) to throw rocks and look at critters. A mother goose was nesting toward the end of the peninsula so we couldn't go too far out, for fear of being attacked. Geese can be rather violent. A passerby politely warned us about the goose, worried our children would frighten it, and later we gently scolded some young teens heading toward the goose, sticks in hand, with seemingly nefarious intentions. I guess we could have let them disturb the goose, but...we're nicer than that. 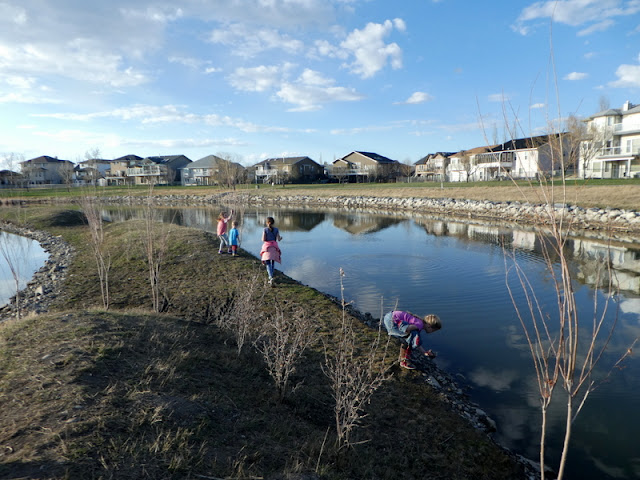 After Tyne went home, the rest of us finished walking around Sunshine, with a quick detour to take a peek at Emerson, the sledding hill, and Superman's house* (all while enjoying yet more timbits).

And that was pretty much our High River experience (though there are several more posts to come, don't you worry). It was certainly interesting to see (one of) my home town(s) again after so many years away.

* This was Superman's childhood home in the 1978 film and was Lana Lang's home in the series Smallville (which also featured my elementary school and several other town landmarks).
Posted by Nancy at 2:32 AM