The weekend of Piper's play was quite packed with activity, mainly relating to the play. She not only had performances on both Friday and Saturday evenings but had a Saturday matinee show as well!

Here's Piper taking a few minutes to visit with Alexander while she got ready for her show on Friday night: 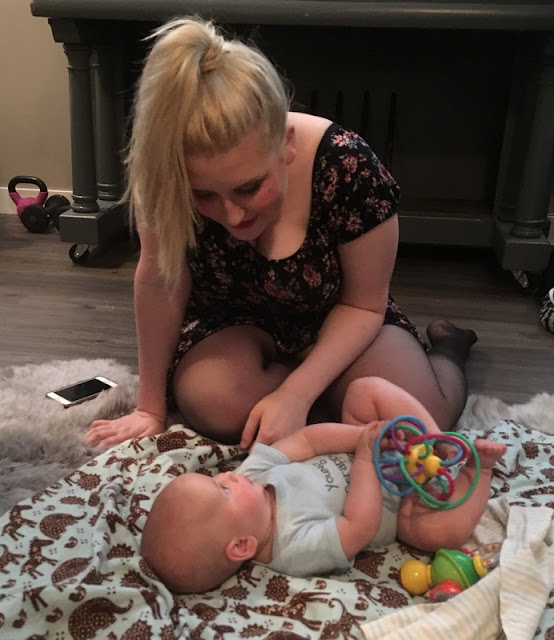 The musical this year was Footloose and Piper played the part of Rusty, the main character's best friend with a rather comical love story, who is, as Wikipedia put it, a "belter." And boy does Piper know how to belt it out! Her song, "Let's Hear it for the Boy!" was phenomenal. Piper hit her high note with pizzaz and wowed the whole audience, all while dancing. Very impressive.

Here are a few pictures  of Piper's performance (she's in the blue dress in the front): 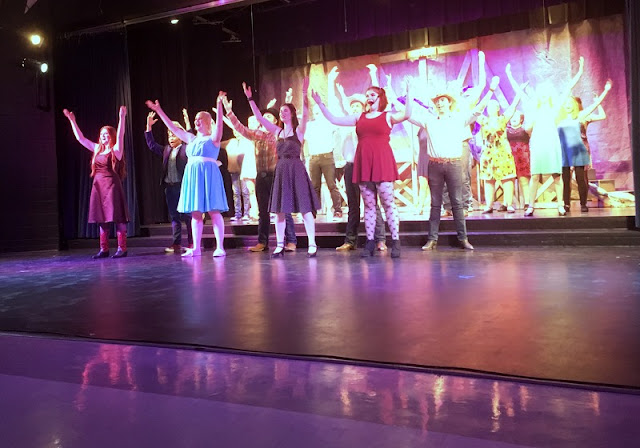 And a few more (she's in the plaid shirt this time): 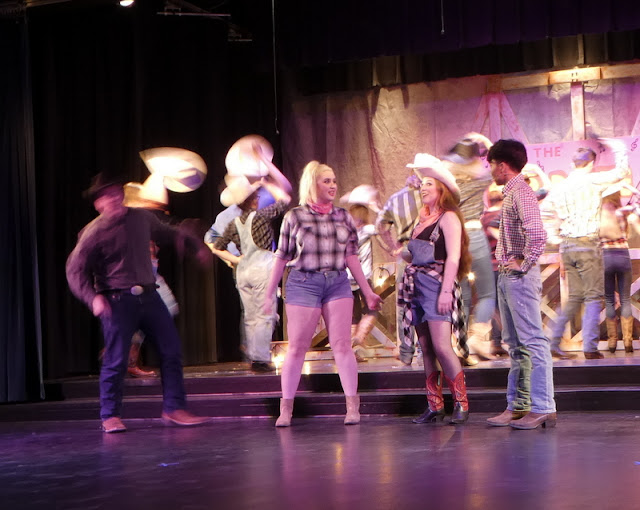 And here she is, seated, in a black dress:

We gave her a bouquet of flowers after the show (but, naturally, we forgot them at home so Naanii ran them into us in the middle of the second act so we could actually give them to her). Here's Rachel and Miriam with Piper after the show: 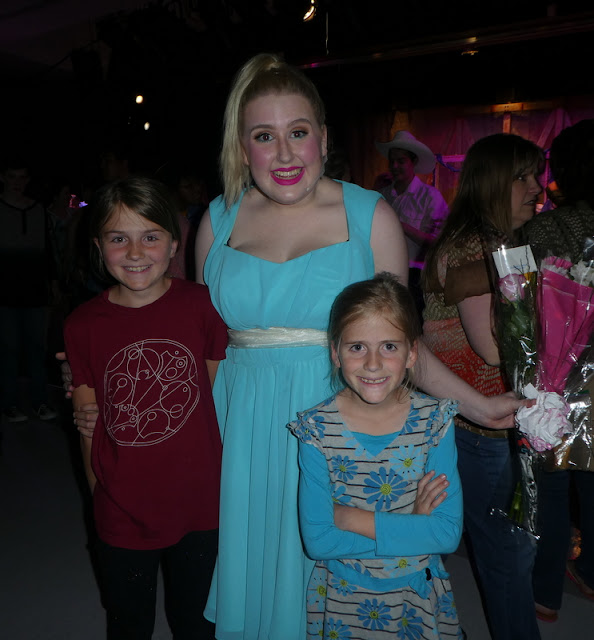 Most of our time visiting with Abra's family took place during the post-show high, late at night. Here's Alexander with Auntie Abra (he just loved her!): 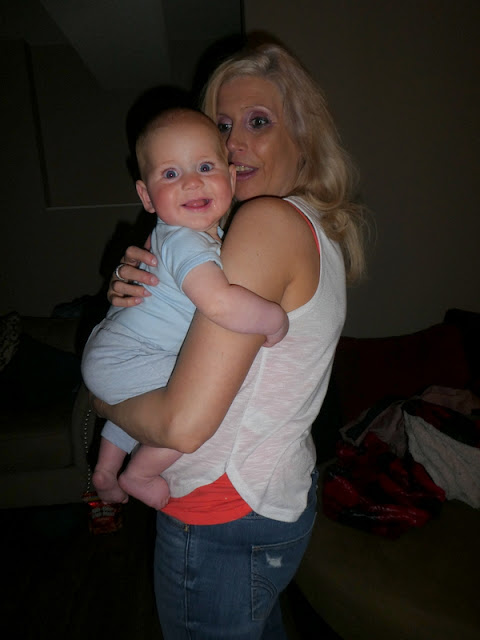 Here's the cousins chilling on the couch:

And here they are again with Uncle David and Auntie Abra joining in: 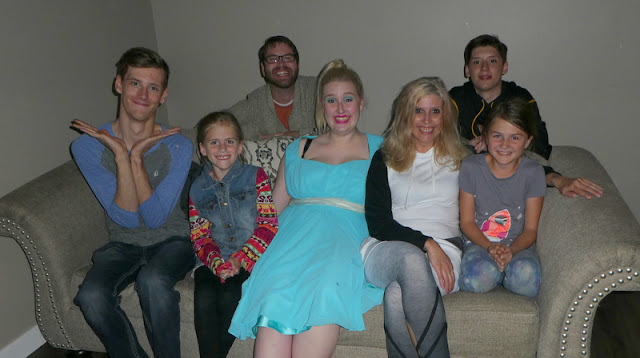 Here's our group, minus Auntie Josie, who'd already called it a night:

And here's our silly picture (I love how Miriam looks silly in the top picture and is dead serious in the silly picture): 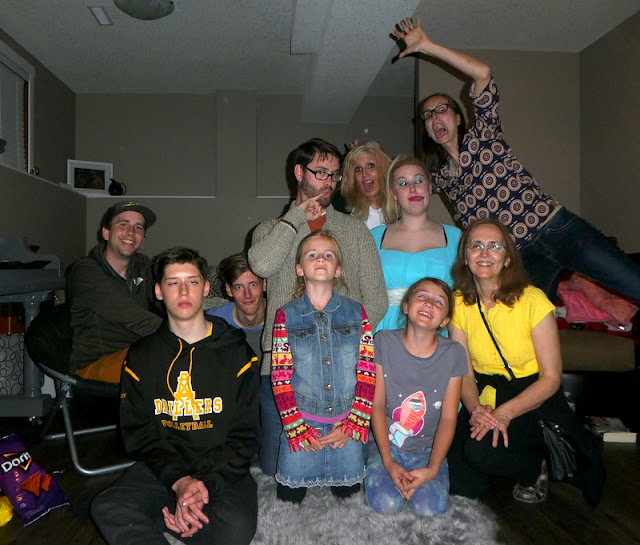 By the time everyone else had gotten home from the play on Saturday night Alexander had fallen asleep. I'd put him down in Patrick's bed. Deklan hadn't seen him yet, so he tiptoed in to take a peek at him...along with Piper, Malachi, Abra, and David. I followed after them and took a picture of all of them watching him sleep. 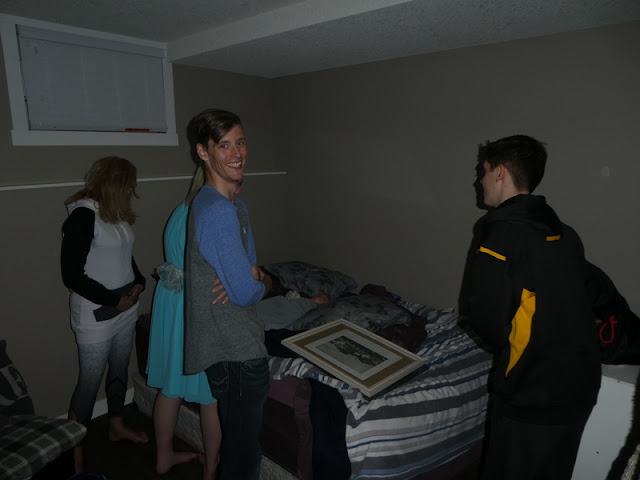 "If he were a little older," Deklan whispered, "This might come off as really creepy."

This remark made everyone giggle a little bit, which roused Alexander a little bit. He opened his eyelids a crack and then shot wide awake, quite confused at the crowd surrounding his sleeping quarters. He shut his eyes quickly and everyone hustled out of the room, into the kitchen, perhaps hoping that he'd go back to sleep. Instead he started screaming.

Apparently waking up to a crowd of people standing around your bed is creepy even at the tender age of six months.

Now that he was up, we decided people could try to hold him. He wasn't too sure about Piper, but Abra took him and he was happy to be back in her arms. 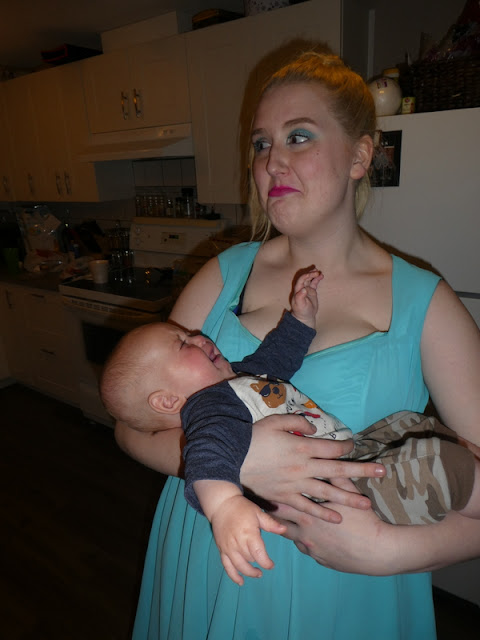 Deklan tried to take him and Alexander resisted.

"Why don't you try holding out your arms to him and see if he'll just come to you?" Abra suggested.

So Deklan held out his arms and Alexander, who certainly understands about reaching for people (but who evidently does not understand that he doesn't have to reach for someone who reaches for him) stretched his arms out for Deklan. But the look on his face as he was being passed off was quite apprehensive. "He's reaching for me so I guess I have to go now," he seemed to pout. 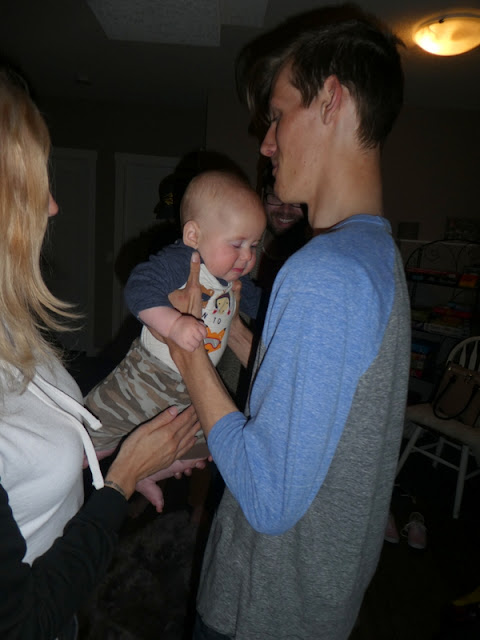 He melted into a puddle of tears shortly after Deklan had him, which everyone (including Deklan) thought was quite hilarious. 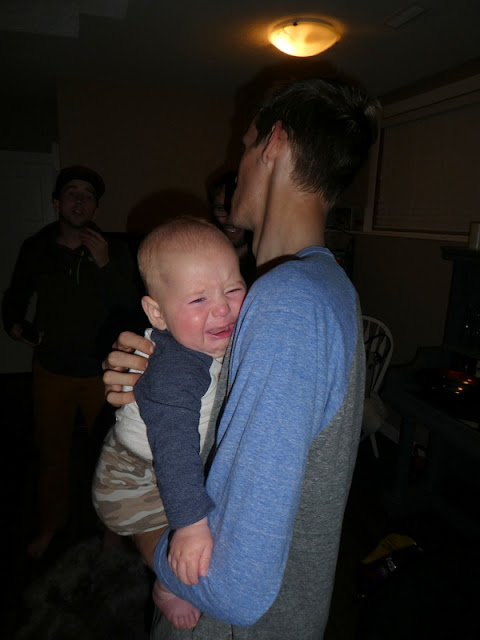 Here he is feeling safe in Abra's arms (he seriously loved her, guys), a safe distance from his great, big (super scary) cousins, happy to play with them from there: 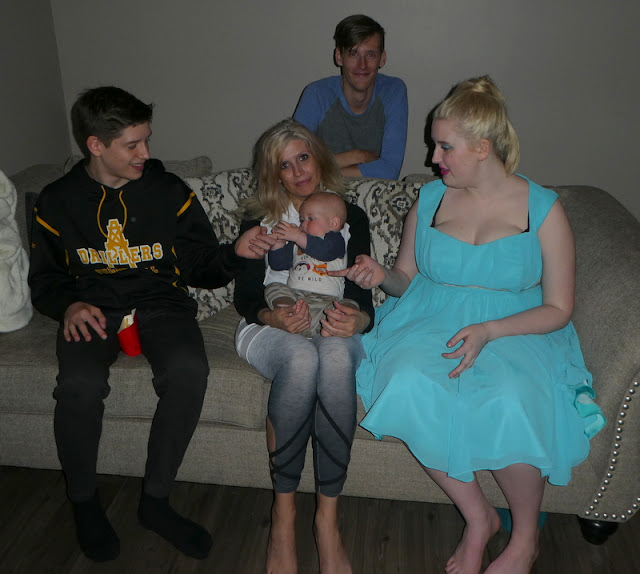 We left High River on Sunday morning, so here are a few farewell photos...

Uncle David drove down from Prince George for the weekend and headed back up there by himself. He apparently saw ten black bears and a few moose on the way, so it's basically Bear World up there! Here he is snuggling with Alexander while I was packing things up at the Lilburns': 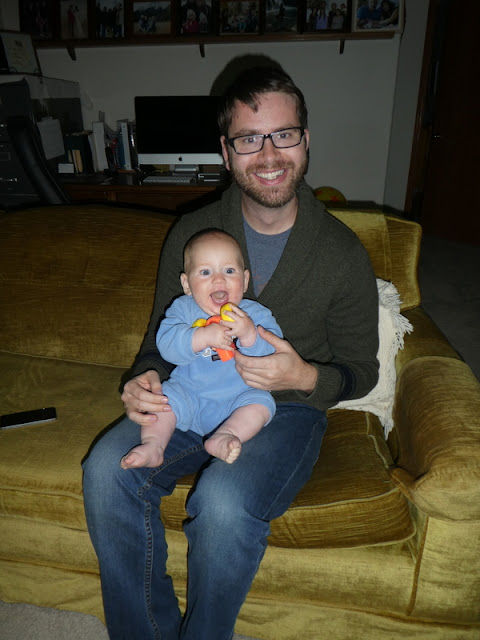 Piper was still sleeping when we went over to Abra's house to say goodbye so Abra waded through Piper's room (she's been too busy to clean lately and/or she's a teenager) to plop Alexander on her bed, which they both thought was funny. 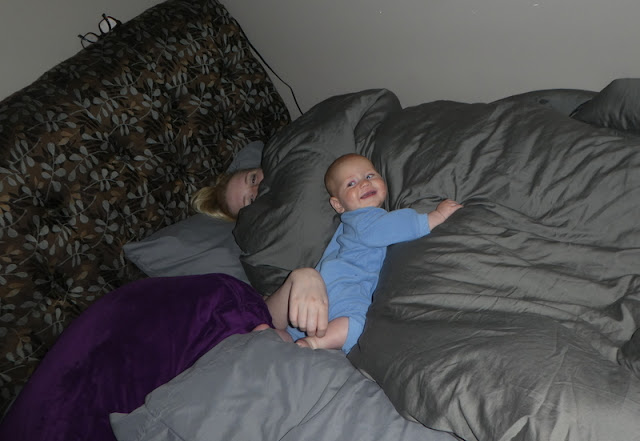 Abra had to go in to work, so we had to quickly say goodbye to her... 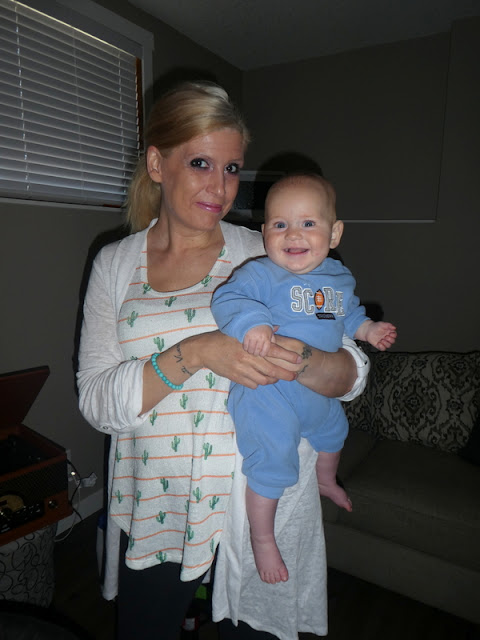 Here are 5/6ths of my siblings together (plus Alexander): 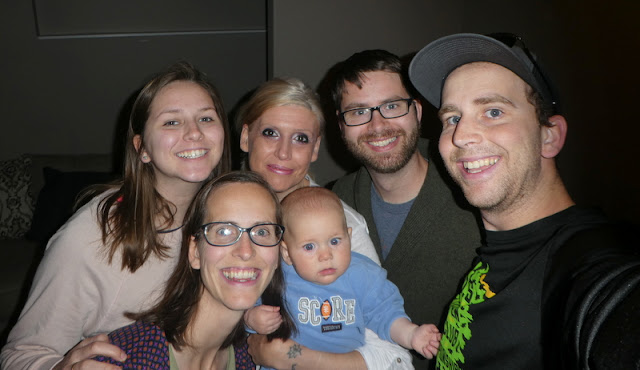 We haven't had all six siblings together since two-thousand and...one? For my grandparents' 50th wedding anniversary, I think. That was the last time, right? So it's only been seventeen years...

That's a blink and a lifetime all at once. Maybe one day we'll all be in the same place at the same time, but until then there are other ways to share sweet smiles like this one (thank goodness for the internet): 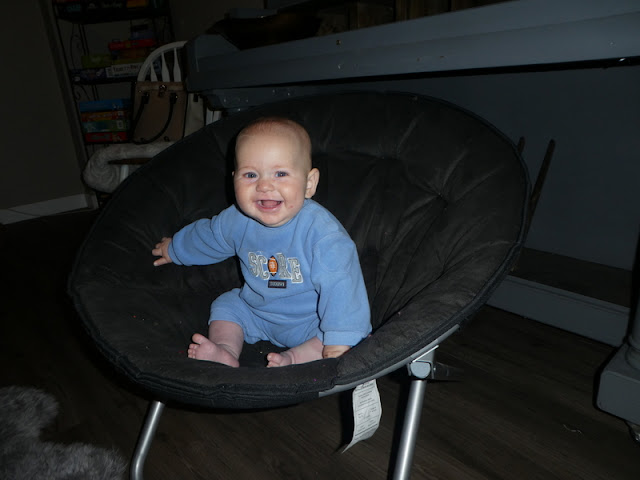 * Families spread across borders suffer. The system is already ridiculously complicated. Trust me when I say that we don't need to make it more difficult for families to reunite internationally. /politicalrant
Posted by Nancy at 10:55 PM