I thought, for some reason, that we'd last hiked the Y in 2012 but my sources tell me it was actually 2011, so 7 years (and three children) later, we decided it was high time to ascend again and made The Y our inaugural hike of 2018. (I should probably mention that Rachel and Miriam hiked it with Uncle Patrick in October of last year).

Here's our crew (minus Daddy and Alexander) before heading up the mountain: 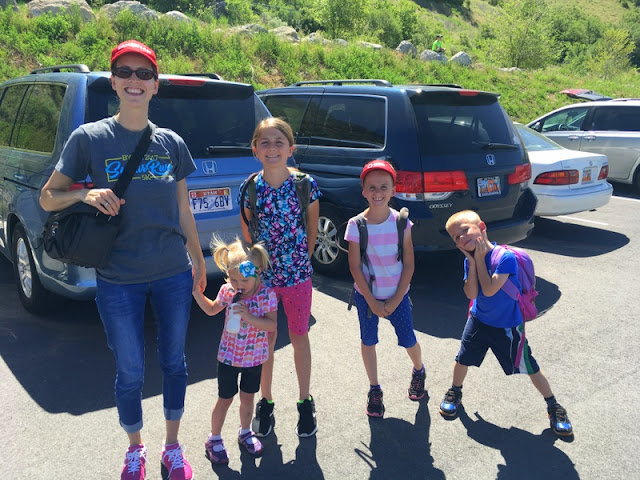 Zoë was crying and complaining, "Mine 'egs are tired!" before we'd even made it to the trailhead.

So clearly this was going to be a good hike!

When we reached the first sign, I pulled out the camera and tried to take a picture of everyone but it just wouldn't work. After a short inspection, I discovered that we'd forgotten to put the battery pack in the camera. Andrew had even insisted on bringing the big camera bag with the extra lenses so we could practice taking pictures! I wasn't about to lug all of that up the mountain for no good reason, so Rachel and I ran it back down to the van and then hiked quickly to catch up with everyone (at switchback #2). They'd gone on ahead without us, but didn't make it very far.

Also left in the van: the backpack Zoë had packed.

Each of the kids packed their own hiking backpack. The big girls each snagged a camel-bak (off brand) and Benjamin and Zoë packed old school backpacks. Rachel, Miriam, and Benjamin all managed to pack things like snacks, water, and bandaids.

Zoë, however, packed this: 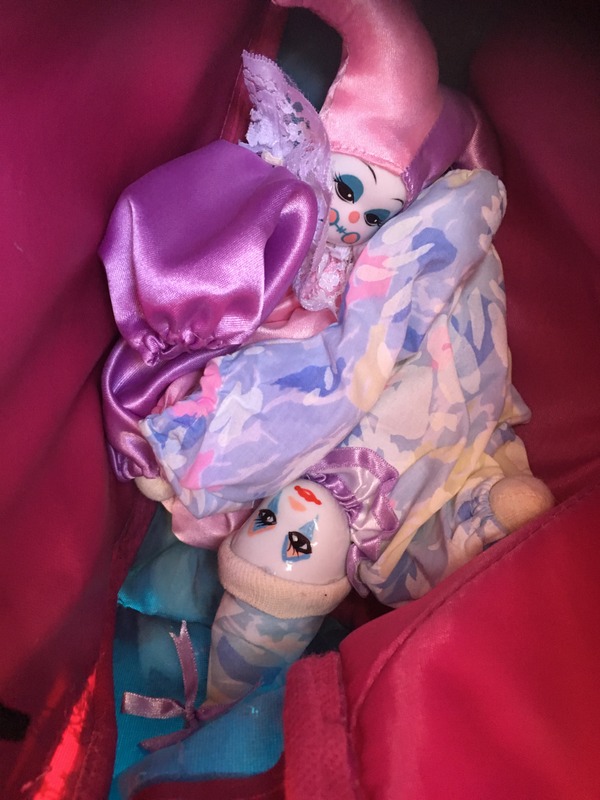 A couple of authentic creepy-ceramic-faced clown dolls from the 90s (which Josie gave to us after cleaning out her room, although I think that only the pink/purple one belonged to me (Rachel was fascinated by them because she "studied" the 90s for "decade days" at school (which made me feel rather old because she kept asking me what was trendy waaaaaay back when I was a kid—mini backpacks, scrunchies, chunky shoes, and clown dolls))).

Zoë whined pretty much the whole way up the mountain. Her favourite thing was when we'd stop to rest at each of the switchbacks. Then she could climb the fence (which she thought was awesome), eat a snack, force someone to hold her, or sit in the shade. But, as you can see, breaks didn't always make her happy (we had our cell phone cameras, so you still get pictures, lucky you!): 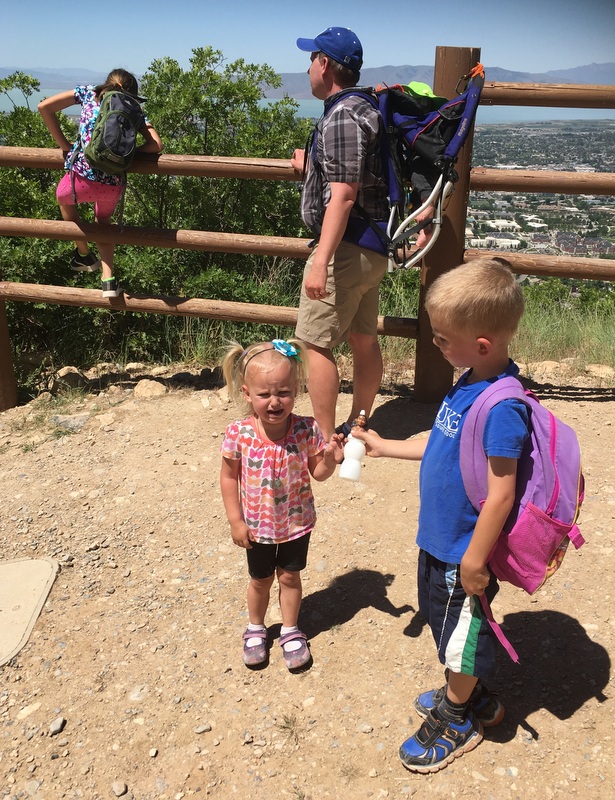 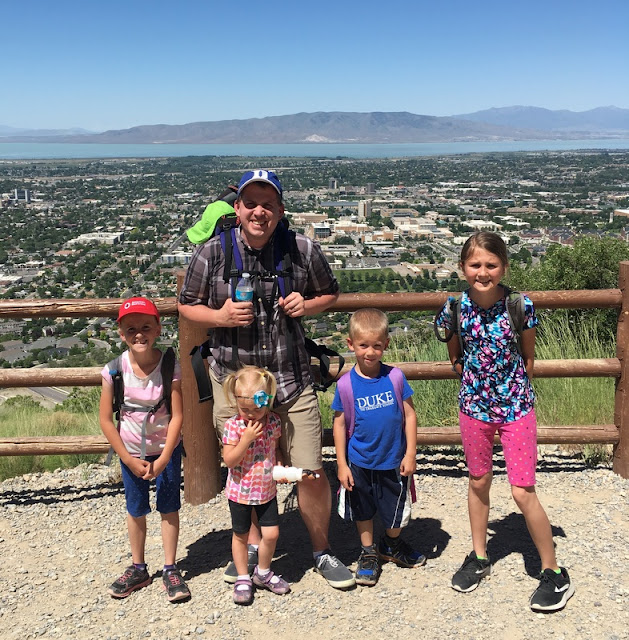 Oh, here's one where she's actually enjoying herself! 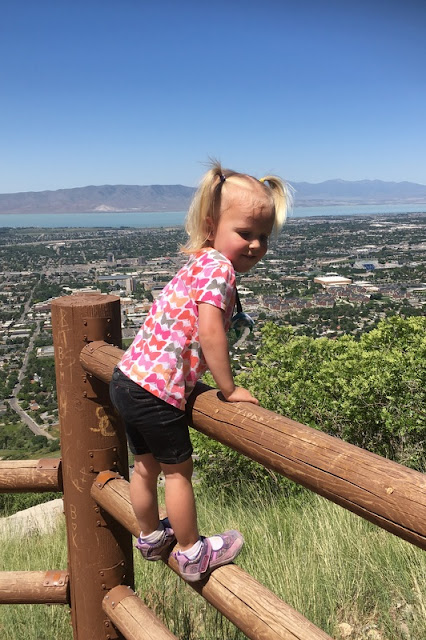 And another one at the very top: 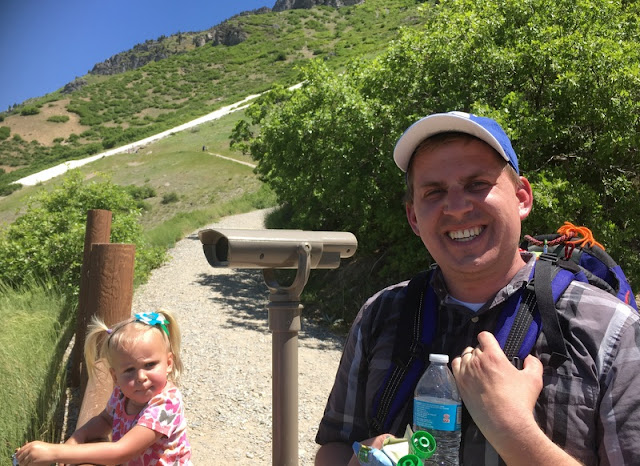 Alexander slept a good portion of the trail, which was a good thing because it was his naptime: 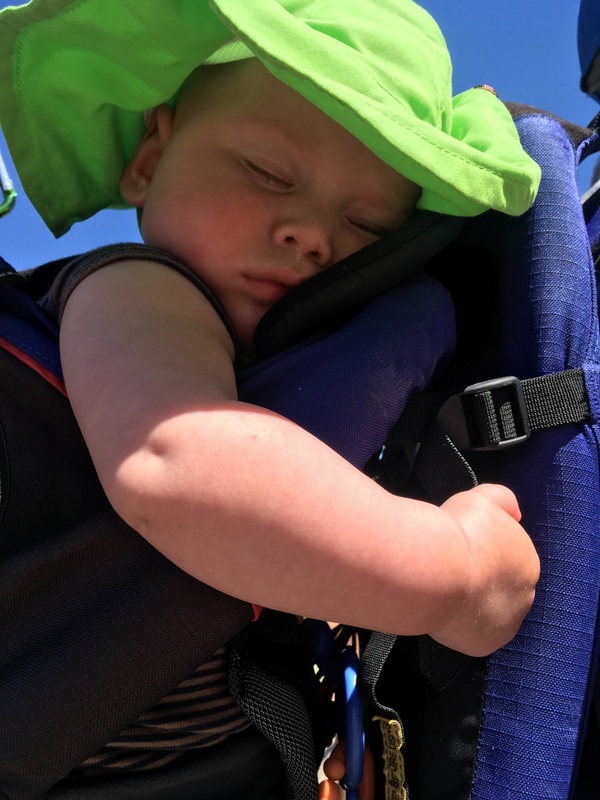 Here's a couple of him awake: 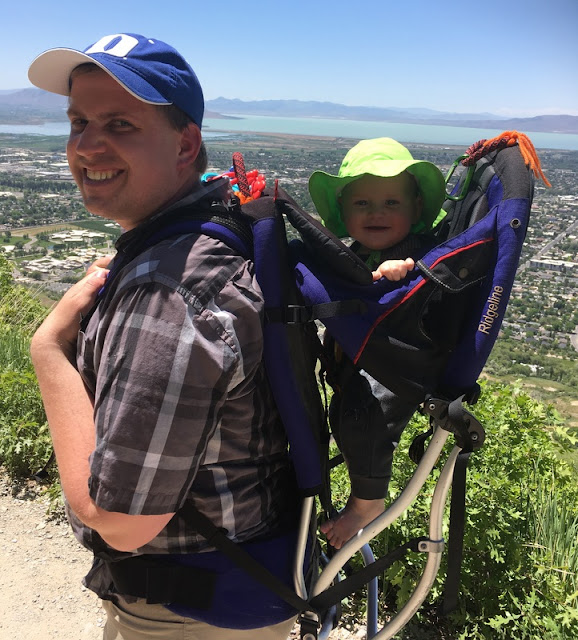 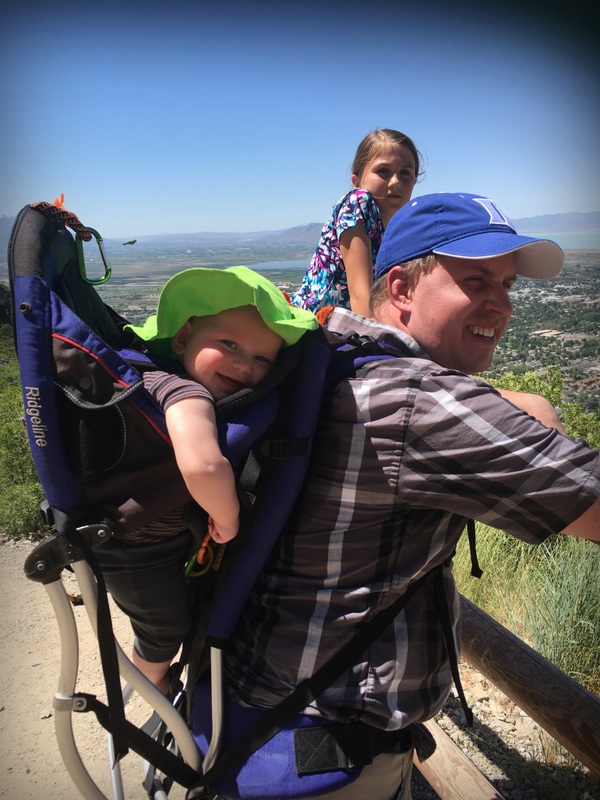 Unsurprisingly, Zoë didn't want to hike to the top of the Y so Daddy took her (and Alexander) to the bottom of the Y, while the bigger kids and I continued to the top. 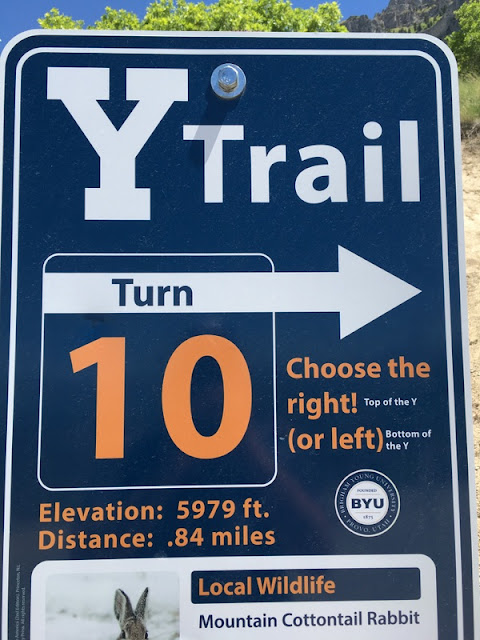 They weren't too sure about hiking the extra distance either, but Andrew told them it would be awesome—he'd take their picture. So, here's the picture of us at the top of the Y from the bottom of the Y. I'm sure we're up there...somewhere... 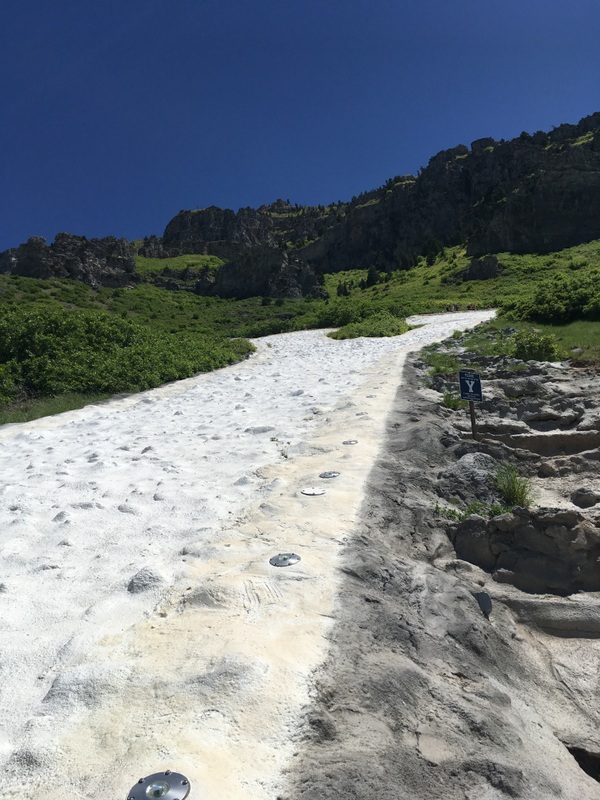 And here's a picture of Andrew and the little ones at the bottom of the Y from the top of the Y (can't you tell it's them?): 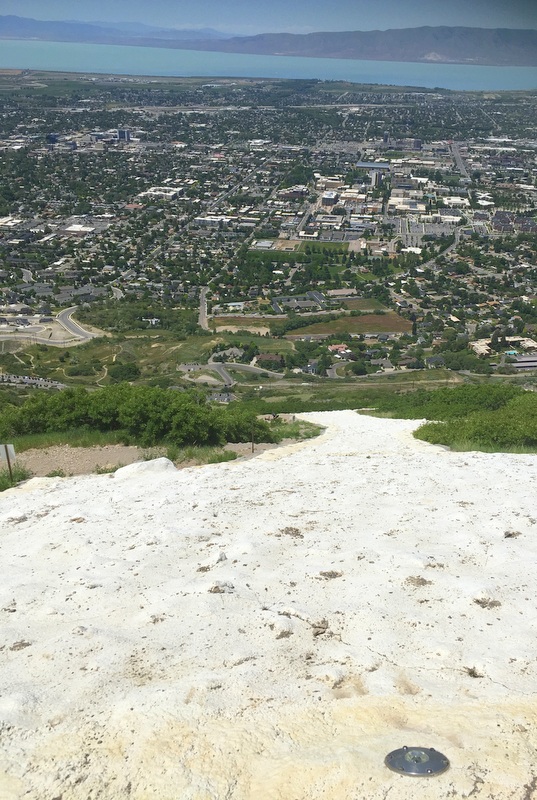 So perhaps taking pictures of each other's group wasn't the best of ideas. Taking pictures of ourselves worked out much better. I raced the kids to this sign (from sign #13) and (not to brag) won! Then came Rachel and Miriam and, finally, Benjamin. 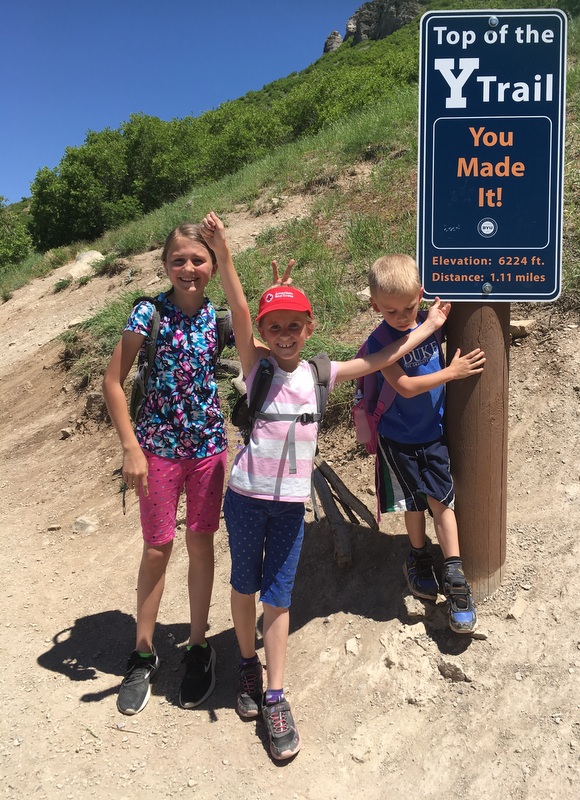 Here's Miriam, Rachel, and Benjamin at the top of the Y: 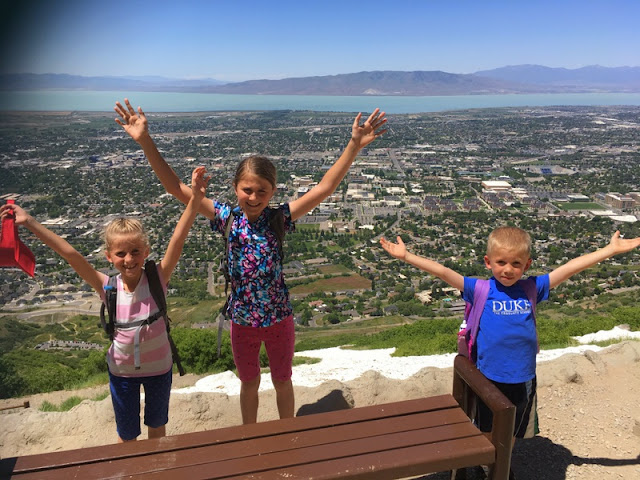 Here's Zoë looking rather pleased with herself at the base of the Y: 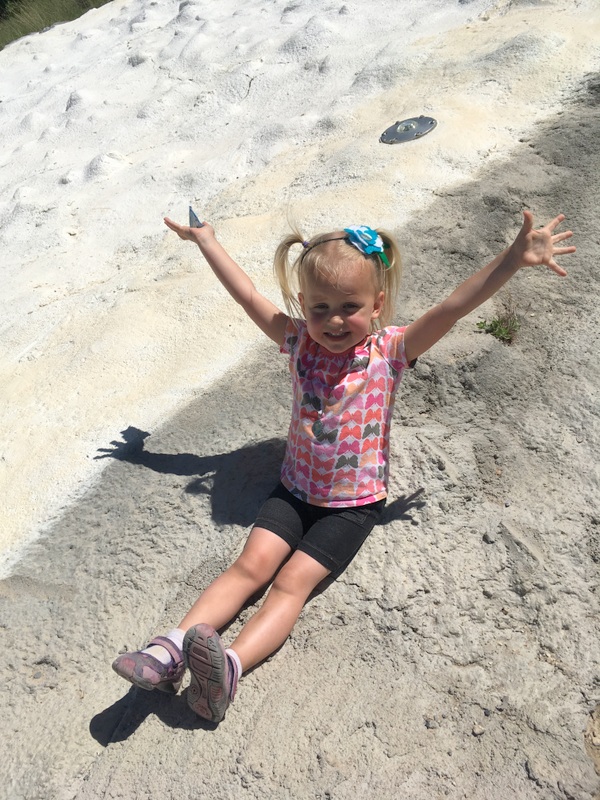 And here's Alexander eating some rocks: 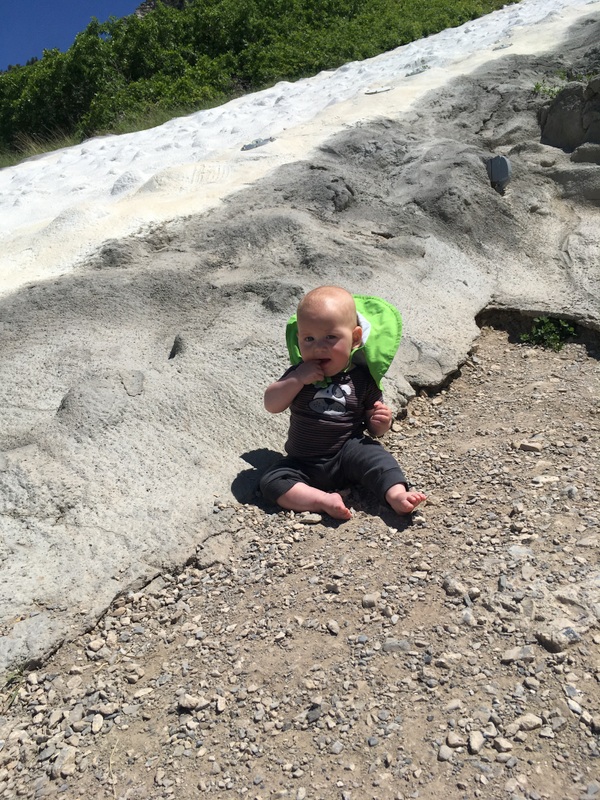 And a lovely panoramic view of the valley that Andrew took:

We enjoyed the new signs at each of the switchbacks. They each had sentiments of encouragement and some information about either the flora or fauna of Y mountain or a fact about the Y itself. We learned that they used to light the Y by soaking mattress batting (?) in oil (which would burn for about 20 minutes) and then they started stringing electric lights around the perimeter instead (which was probably much safer). In 2016 they installed lights around the Y so now there's no need to string the lights up whenever they want to light the Y (it's traditionally lit for homecoming).

Here's a picture of each of the kids at "their" switchback: 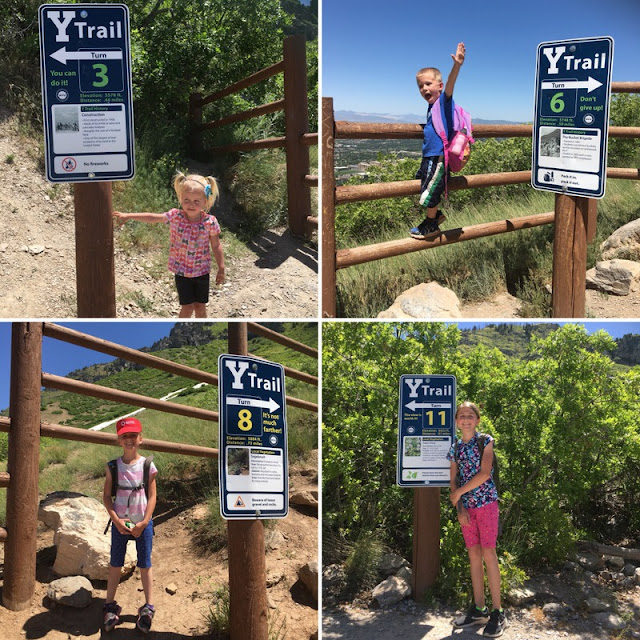 We let Benjamin and Rachel round up because it's almost their birthdays. When Benjamin was dragging along the trail (right around sign #5), Andrew said, "Whoever touches the next sign gets the next birthday!" Benjamin took off like a rocket, leaving Rachel and Miriam looking at Andrew skeptically. "Doesn't he know that it's going to be his birthday next no matter what?" they mused.

They weren't about to race down the entire path for such a farce of a promise, but Benjamin ran as fast as he could and beat everyone soundly. So he gets the next birthday and he'll get to turn six. Lucky boy!

Here are the big kids resting on one of the benches at sign #10: 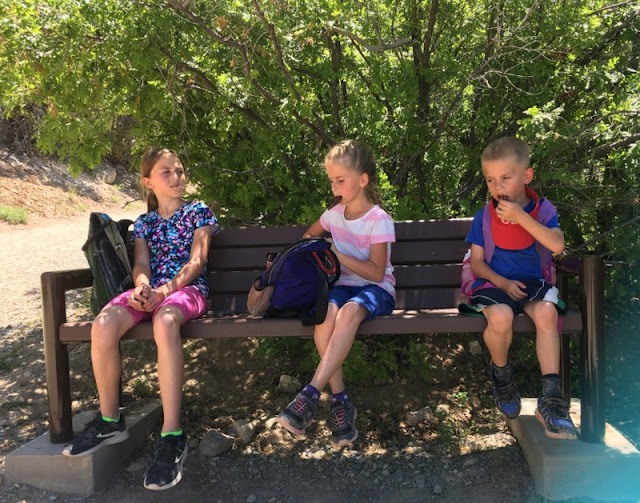 The bigger kids all had excellent attitudes the whole time we were hiking. We told them that in order to get ice cream after they'd have to outweigh Zoë's attitude (which was obviously going to be poor) with their own (which meant they'd have to be extra good).

At one point, Benjamin sighed and explained, "I'm still happy. But—ooooh!—my legs are tired and I'm so sweaty and hungry and sore! But I'm still happy!"

He just had to get those little complaints out (and that's fine because he was an excellent hiker otherwise). 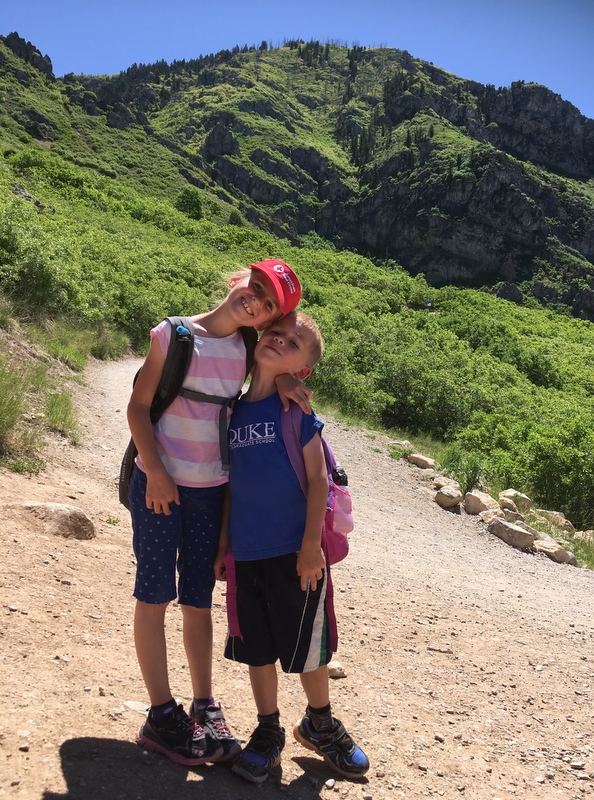 After we'd rested at the top for a while, the big kids were feeling anxious to head back down the mountain. Alexander, however, had suffered a bit of a blowout and was feeling ready to nurse (and Zoë was perfectly happy to continue resting), so we gave the kids permission to head down the mountain on their own. After all, it's not like they could possibly get lost.

They did great on their own!

Miriam fell down and scraped up her hand and knee. Rachel quickly pulled out her first aid kit and bandaged Miriam up (after rinsing her wounds with water).

When they came across a rattlesnake on the trail, they listened to the other grown ups on the trail who cautioned them to keep away (even though the rattlesnake was dead and someone had removed both its head and its rattle). It was freshly dead, too, because it certainly wasn't there on our way up the trail: 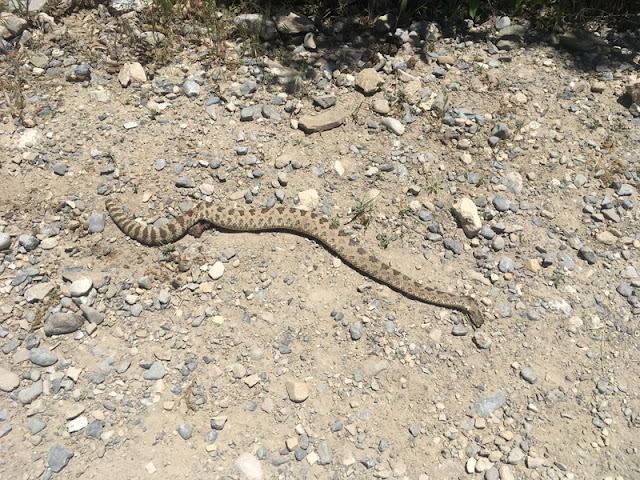 I'm just glad they didn't come across a live rattlesnake (though, honestly, my kids are pretty good at keeping away from snakes; we found some sort of garter snake in the yard the other day and when I showed it to the kids they all screamed and ran away).

The kids waited for us at the Y gate at the bottom of the trail. Andrew and Alexander were next to make it to the bottom of the trail. With gravity and Alexander weighing down on Andrew's shoulders, he had a hard time waiting for Zoë and I to keep up. Zoë hiked at a fairly steady pace but she cried—long, droning wails—the whole way down the mountain. She was only happy when we were resting (and that's using the word happy quite loosely): 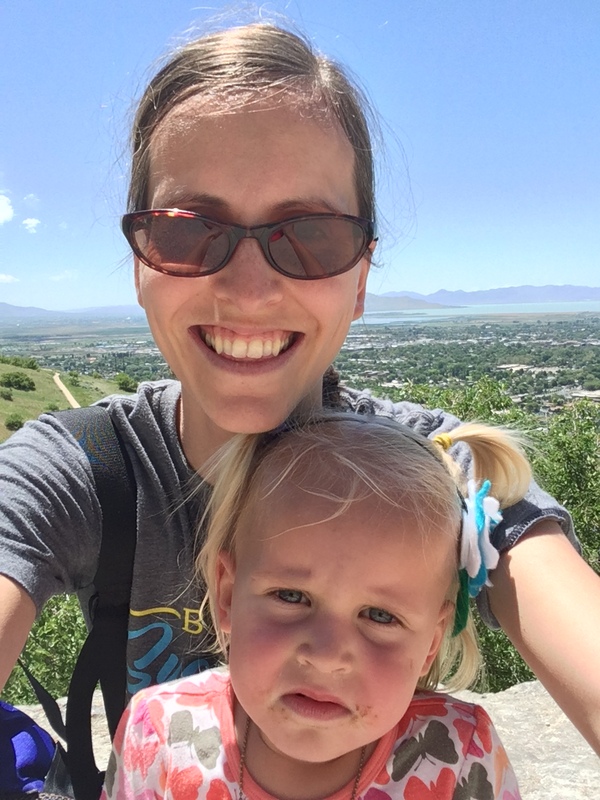 I promised I'd show her the wild rose bush I spotted early on in the hike, which kept her motivated. Here she is "posing" for a picture by the roses: 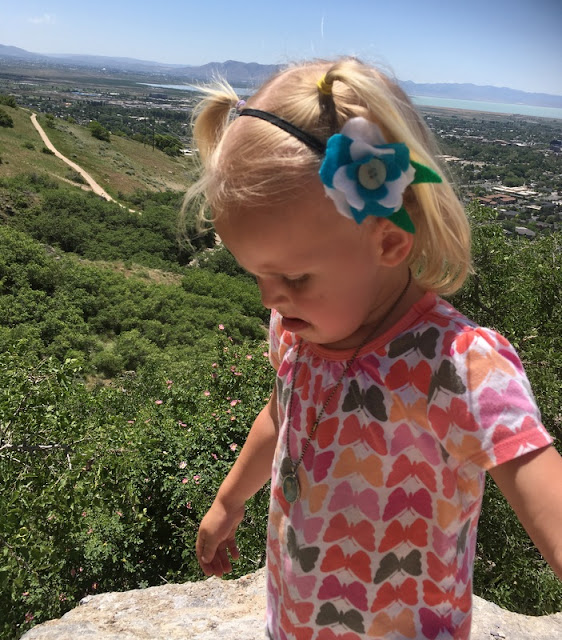 She told me that she doesn't want to "ever, ever, never" go hiking again, but she's fairly fickle because the very next day when all the old people were feeling the after effects of hiking, she said, "I love hiking! Let's go for a hike! I want to go hiking every day!" We took her for a walk around the block instead because no one really felt like dragging her up a mountain again.

Here we all are (minus Alexander, who is still on Andrew's back) at the bottom of the trail: 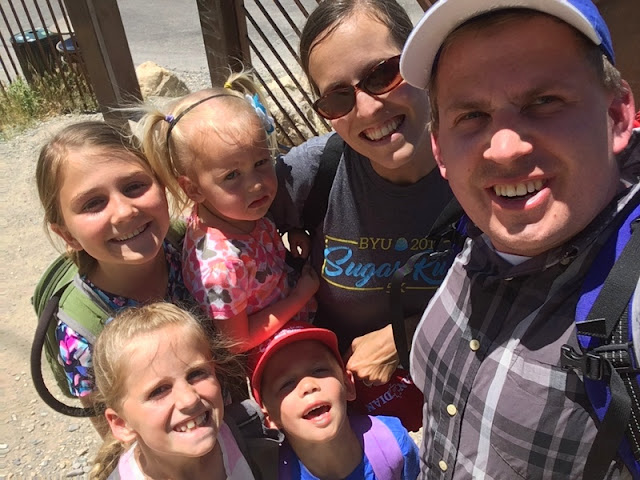 And here are a few pictures I snapped at The Creamery: 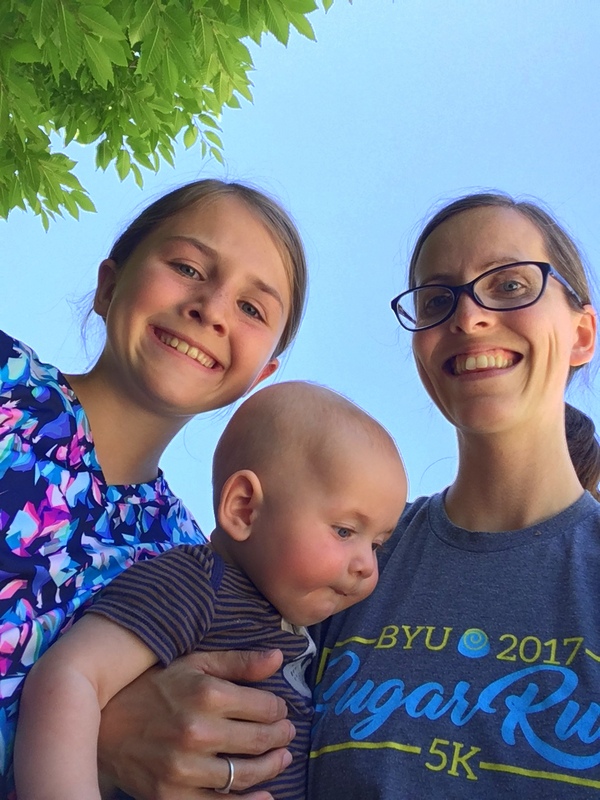 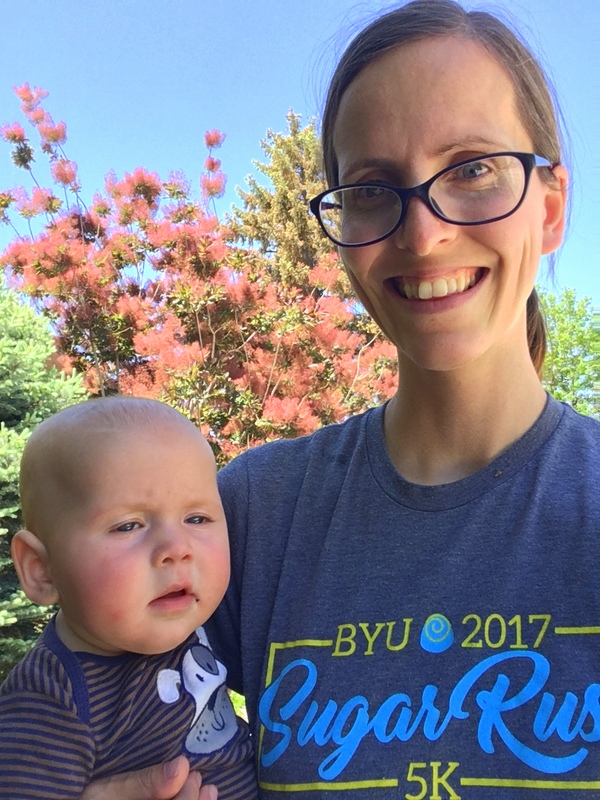 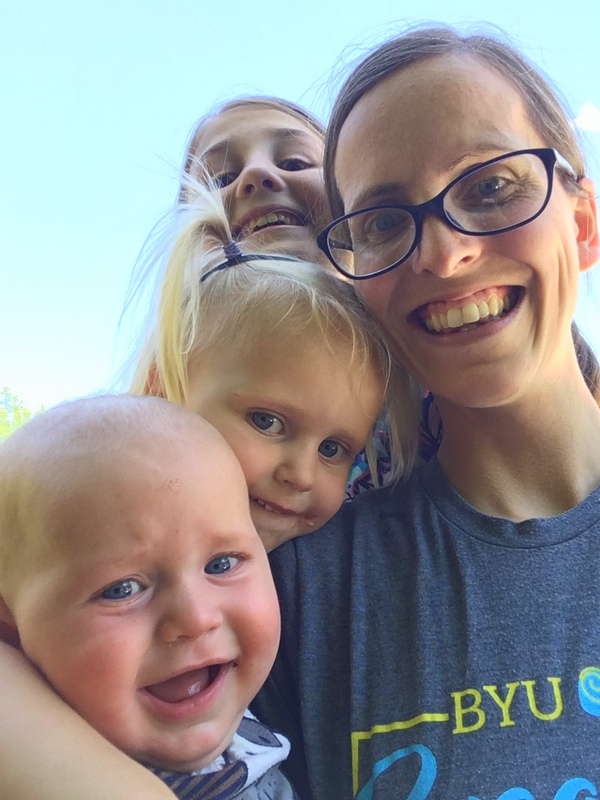 I'm not sure we'll be hiking the Y again anytime soon, but we'll definitely be doing some other (perhaps more moderate) hikes together!
Posted by Nancy at 3:08 PM