A concert in the park (September 2)

Would you believe me if I told you I still have a list of posts to write about this summer? I'm sure I will get around to some of them. Other will probably remain unmemorialized here.

Time just won't slow down for us!

Two Sundays ago (already!) we went to a concert in the park with my mom. It was touted as a Latin American Music Festival, but it ended up being not quite what we had expected so we didn't stay too long. We did, however, arrive with plenty of time before the concert which meant we got to watch the set up crew, which was quite comical.

The concert was, instead of a Latin American Music Festival, more like a musical devotional in Spanish, which is totally cool if that's what you're going for (but that was not what they were going for with the way they advertised it). It was run by some sweet couple missionaries who were just doing their best to draw a crowd, I'm sure, and they all took their jobs very seriously.

The men setting up chairs were hilarious.

I had packed a picnic dinner for our family (except for Zoë and Andrew, who had elected to stay behind so that Zoë could play with Riley) and so we sat down to eat it in a very roomy row. One of the men came up to me and warned me that our row was going to be an "exit" row so I'd have to move my stroller before the concert started. I happily complied and parked our stroller at the end of our row. He then told me I couldn't park our stroller there because he was going to add a few chairs to the end of our row, so I moved our stroller again.

We watched this man (and another one) rearrange chairs and straighten rows, then do it all over again. One of them would so something and the other one would come along and undo it. They moved the rows closer together, then they moved the rows farther apart, then they took away the front row and moved it to the back, then they took away the chairs they'd added to the end of every row (including ours) and made another row in the middle (which meant that I could have left my stroller at the end of our row after all).

They were still rearranging chairs when the concert started and continued to shuffle things around through the entire first performer's ticket.

My mom and I were beside ourselves trying to keep from laughing while watching them.

"They are worse than a group of women setting up a potluck table!" I whispered to my mom.


"What does that mean?" the girls wanted to know (Benjamin, by this point had lost interest in the program entirely and was off playing in the dirt (outdoor concerts are the best for wriggly little boys)).

My mom explained that at one particular Hancock family reunion (I believe it was the one at the Red Barn in Raymond in the early 2000s) she and I had placed our family's contribution to the potluck dinner on the table and then watched with wry amusement as the table was rearranged over and over and over again. By and large the re-arrangers were women (though I'm sure some men were the designated potluck dish dropper-offers they didn't seem to also feel the need to rearrange the table).

Someone would walk up with a jell-o salad, tsk at the table, then move all the desserts to one side, including all the jell-o salads. Then someone else would come with a green salad and notice a distinct lack of salads (because Mormons gonna Morm members of the Church of Jesus Christ of Latter-day Saints gonna...Saint (we're famous for our jell-o consumption, no?)) so they would head over to the dessert section and grab any jell-o salad that could remotely be called "healthy" and move it over to the salad section (this one has pineapple chunks so clearly that qualifies as dinner not dessert).

Then someone would walk in with a bucket of fried chicken and would notice that some heathen put a bag of buns in the middle of the table, when clearly that should have gone on the end opposite of desserts! Buns first, duh!

Setting up a potluck table is an art in our culture, and watching these ladies use their artistic license was ridiculously entertaining. It's a seemingly boring memory, but one that will never not make me laugh.

Anyway, around the time the men finally stopped rearranging chairs we decided to call it quits on the concert, but we'd hardly been out long enough to call it an outing, so we stopped by the botany pond at BYU to visit the ducks (who greeted us enthusiastically, hoping for a handout (but we'd eaten all our dinner and had arrived empty handed)).

Here's all the kids (except Zoë, who wasn't present) with Naanii (sorry you're making a weird face, Mom; there are better pictures of you, I promise): 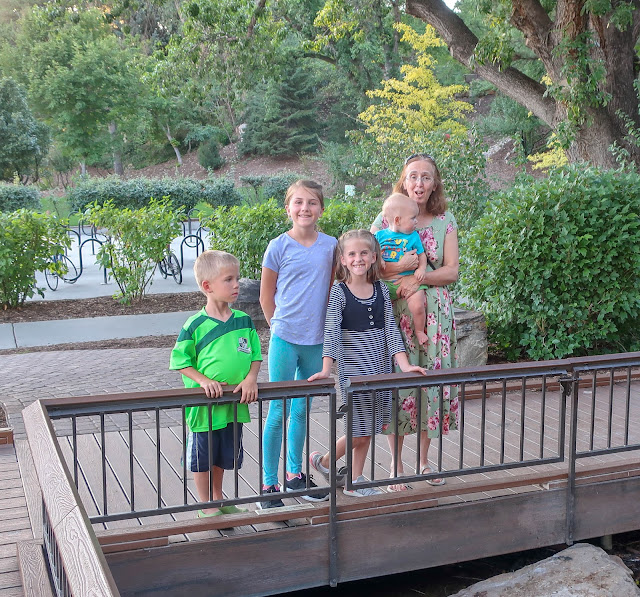 Alexander has been slowly allowing Naanii onto his "safe list." He is the happiest, flirtiest little guy as long as no one tries to pick him up. He hates being held by anyone not on his "safe list," which has been limited to me, Andrew, Grandma, Grandpa, and Rachel for months now. I'm glad to see that he's expanding his circle of trust. 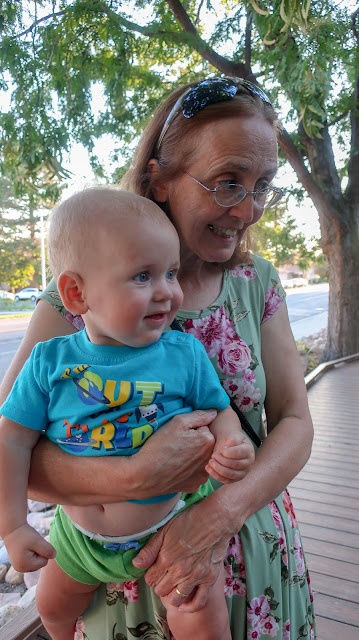 He even let Naanii take him all the way on the other side of the pond from me (without screaming once, though I don't know if he made his distress chirp or not (Reid and Karen have reported that he has a little chirp he does when they walk too far away from me (while we were camping, for example))). Here they are admiring some turtles (and ducks, probably) together: 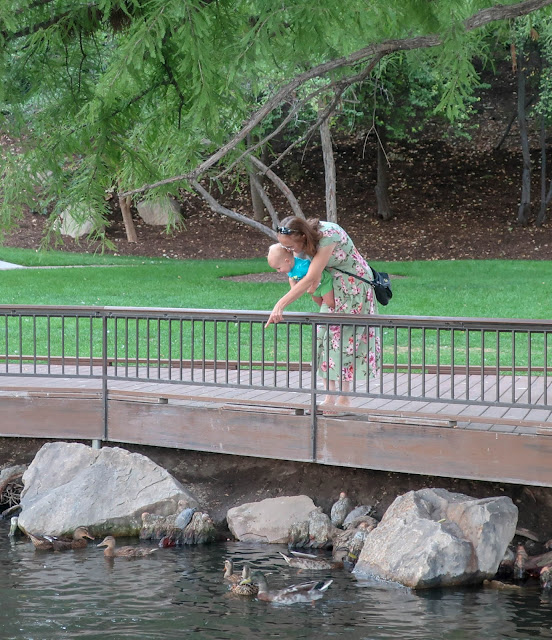 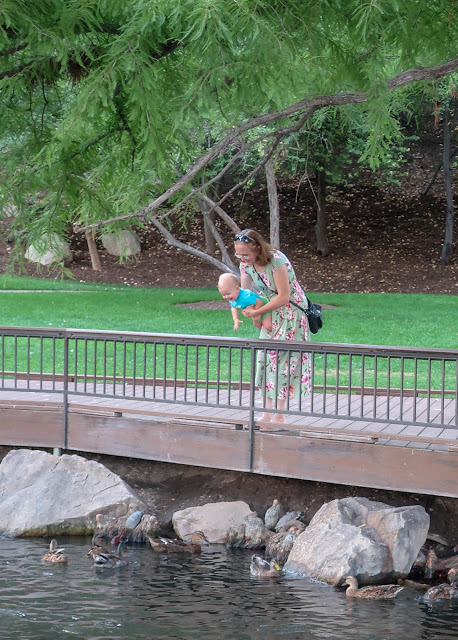 Here's Benjamin and Miriam observing the pond (Rachel walked around and chatted with me and I didn't take any pictures of her for some reason (she hates posing for pictures so she was okay with this)): 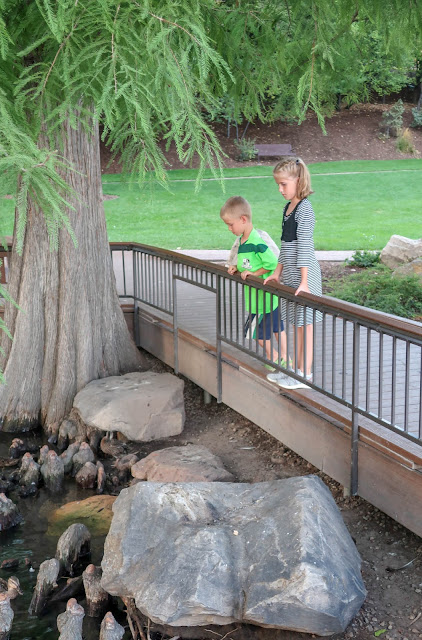 Here's one more of Alexander with Naanii: 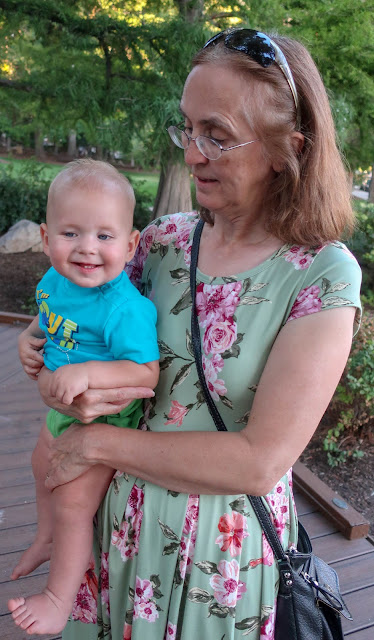 And here is a picture of a duck sleeping on one leg: 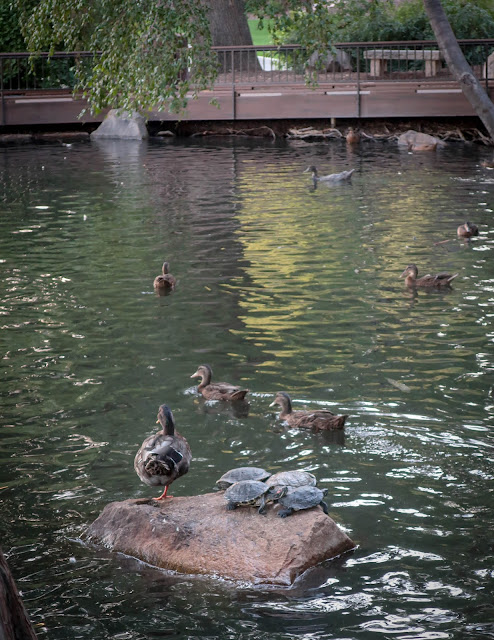 My children didn't know that ducks sleep like that, which was weird to me because I had learned it in elementary school so I felt like that was simply something they should have known as well.

But I suppose (even with the "dread" common core curriculum) there is a lot of room for teachers to individualize their curriculum. My teacher—I believe it would have been Mrs. Robinson because a likely time to have learned about it would have been during our bird unit in her class (a 3/4 split class (I was in grade three, but we learned the same stuff as those in grade four)), which, incidentally, was the year 1993, the same year this book was published, which kind of seals in the fact that it would have been in her class because I know it wasn't Mr. Lowe who read this story to me (us, the class) and I know that it definitely was read to me at Leigh Elementary.

Anyway, Mrs. Robinson read us the book Why Ducks Sleep On One Leg, by Sherry Garland, a Vietnamese legend about ducks who had only been given one leg and when they petitioned the gods for a second leg, they were given a leg of pure gold (which they were cautioned to keep tucked away while sleeping so they wouldn't be robbed). Then all other ducks started following suit.

It's possible we learned the actual reason in class as well but clearly the legend made more of an impression on my young mind. The actual reason ducks sleep on one leg is simply to reduce the loss of "heat lost through its unfeathered limbs" which is entirely uninteresting compared to hiding away a leg of pure gold. Almost as disappointing as a Latin American Music Festival turning out to be a sacred music devotional (not that sacred music in and of itself is disappointing; it's just not the golden leg we were expecting).

I thought this would be a good time to talk about my childhood confusion between potluck dinners and potlatch ceremonies.

I grew up participating in potluck dinners rather routinely and when the concept of a potlatch was introduced to me in elementary school I definitely thought they were the same thing and could not, for the life of me, figure out why potlucks had ever been banned so I always felt a little bit nervous about the fun I had at those church potluck functions, filling my plate with various (possibly nefarious!) dishes to sample because maybe they were still a little bit illegal. You never know!

Potlatches are entirely different and were only banned because white people were afraid of The Other, and, honestly, I'm not sure where my confusion stemmed from. I guess "an opulent ceremonial feast" could be a definition for either potluck or potlatch. The difference is in the details.