When I input this evening's pumping session to my spreadsheet I realized that I hit a milestone of sorts—6912 ounces! That's 54 gallons of milk.

My original goal was to hit about 72 gallons of milk (since that's approximately how much a baby might consume in the first year of life), but I honestly don't know that we'll get there considering I quit my morning pumping session mid-June. It was just getting too crazy trying to squeeze that in every morning with all the kids home from school and Alexander getting mobile.

I mean, when it was just me, Zoë, and Alexander in the mornings and all Alexander ever did was this: 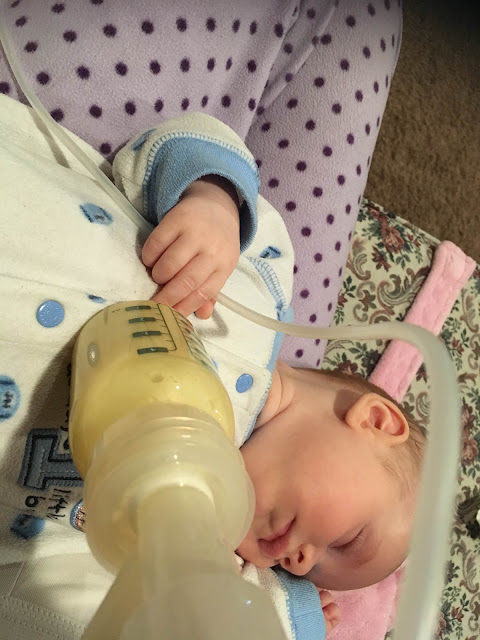 ...pumping in the mornings was relatively easy. Once he got mobile it was...not so easy.


I was definitely on track to hit 72 gallons before I halved my pumping time. And now I'm slowly weaning myself off of my evening pumping time so there's no way I'll make it to 72 gallons and I think I'm okay with that.

The little guy I had been pumping for found a formula that has been working for him so he doesn't need me anymore and I've been pumping for nearly eleven months now (we won't talk about how old that makes Alexander (because how is he nearly eleven months old already?!?)) so it's about time to focus on feeding just one wiggly, distractible baby and soak in those last precious moments of nursing.

And by moments I mean: the next year (because that's my plan).

My friend is weaning her baby right now and shared this quote by Søren Kierkegaard and it almost made me cry just thinking about weaning my own baby, even though that's still months down the road:

When the child must be weaned, the mother too is not without sorrow at the thought that she and the child are separated more and more, that the child which first lay under her heart and later reposed upon her breast will be so near to her no more.

So let's not speak of weaning (nor of upcoming first birthdays) because I'm not ready for any of that stuff anymore. I feel sad even letting go of Alexander's little milk buddies.

Here he is with Baby S, who is a few months older than him:

And here is Alexander (and Zoë) with Baby J, who is a few months younger than him:

Baby J's mom brought us that beautiful dahlia from her garden to thank us for sharing our milk. I'm rather smitten with dahlias this year. Some of our neighbours brought by an entire bouquet of them last week and they're just gorgeous. Perhaps one day I will try growing some. Perhaps some day I will do a lot of things. I've been dreaming of all the things I could do with my pumping time (and even my nursing time). Even though the thought of giving up nursing for good is sad and scary, it's also a little exciting.

Earlier this year I fancied myself a poet. I wrote a lot of poems, pages upon pages of them, ideas I had while I was nursing (and mostly about motherhood because that's what I keep busy with these days). But then, at Andrew's prodding, I submitted a few to an editor and didn't ever hear back from them so I put that project on the back burner while my I licked my wounds. I do feel like I should get back to writing these ideas down because I still have a lot of quiet thinking time while I'm nursing and because I just read through some of my poems and some of them are not half bad (while others are probably more than half bad).

This was one I wrote down when Alexander was still a teensy-weeny thing and everything was heavenly but also so very overwhelming:


Midnight feedings and family planning
Imagine doing this all over again.


But, oh, imagine not doing it again.

I'm fairly certain Alexander is our caboose (Andrew is 100% certain that Alexander is our caboose) and that thought makes me so, so sad because I love babies. But I also recognize that we have our hands full. And I enjoy our big kids. And there's lots of adventure left to be had. And—who knows?—it might be nice to not be woken up every two hours to feed someone.

(Seriously. Zoë nursed every two hours until I finally weaned her...in April of 2017...six months before Alexander was born. And even then she didn't sleep through the night until months after he was born (let's be honest—she often still gets up) and now he thinks getting up every few hours in the night is the cool thing to do and, like, it miiiiiight be nice to sleep for more than two hours at a time but I really can't say for sure because I'm not sure that that's a thing that happens (I'm fairly convinced y'all are making that up)).