We humans are highly adaptable, which is sometimes good, I suppose, and sometimes not. My toddlers, for example, tend to be incredibly clingy individuals and hate whenever anyone takes their spot on my lap (or anywhere else they had chosen to sit). So Benjamin is well-trained in getting up in the middle of story time to switch sides with Zoë, who often wanders in and out, inevitably demanding to sit on whichever side of me he's currently sitting on because that's her spot and she wants to sit next to Mom and she absolutely can't sit anywhere else. She will literally come and wedge herself between me and him, so he'll just sigh, stand up, and move to my other side.

Now that Alexander is getting older and has begun asserting himself in the same manner, it's Zoë's turn to be adaptable (or "flexible" as I'll tell her).

Alexander will come and wiggle his way between me and her and she'll squawk and fuss.

She'll huff and puff and get up and move to the other side.

I have a feeling that my toddlers aren't as interested in sitting by me as they are in displacing their siblings. It's totally a power move, an attempt for the toddler to assert their dominance, but it helps their older siblings learn to be adaptable. (Any ideas on how to teach the youngest child such a thing?)

Other times being adaptable isn't so great. For example, despite yesterday's crystal clean air, we woke up this morning ensconced, once again, in a layer of smoke. It wasn't nearly as bad as it has been, but it was still noticeably smokey.

At around 8:30, Andrew told the kids to get their shoes on and start walking.

"You're making them walk to school?!" I asked.

Talk about lowering your standards! Sheesh! If it's not a health crisis, we're fine!


Speaking of smoke and fire, Benjamin has been rather preoccupied with this wildfire. He was "King for the Day" last week so he got to wear a crown all day and brought in a bin of items to show-and-tell and the whole class wrote him a letter about why they liked him while he "just got to sit and colour a picture!" I compiled the letters into a little book for him and used his picture as the cover.

On the back of his cover he drew this scene: 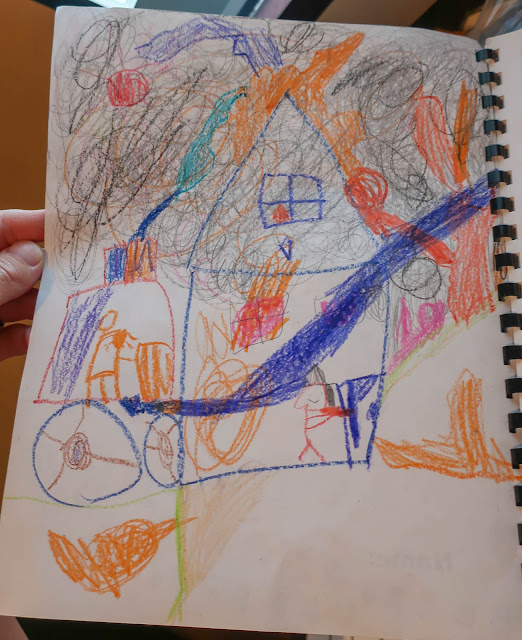 It's a picture of us going about life in our house while the mountains rage with fire and smoke billows all around.

A perfectly normal thing to draw a picture of, right?

I'm just glad we're not among those evacuated (who knows what kind of drawings my little boy would come up with under those conditions).

He had an interesting experience at recess on Tuesday. He found a souvenir from the fire, which he secreted away in his pocket and brought home to show everyone after school.

"I have to show you something, Mom! Look at this!"

"Ooh. What is it?" I asked, feigning interest and awe (because it looked like an ordinary rock).

"It's a piece of coal that got blasted off the mountain from the fire and if flew through the air and landed in the grass right in front of me at recess!" he explained excitedly.

Benjamin's at that stage where he enjoys telling stories—And to Think That I Saw It on Mulberry Street level stories. I don't consider it lying, per se, because it's a perfectly normal, highly imaginative stage that children his age go through. But sometimes it's also good to know the truth.

"Well, I found it on the grass anyway," he said.

He brought his treasure up close to me so that I could get a good look.

"What? No! It can't be!" he said, in the same you're-telling-tall-tales voice I'd used on him earlier.

Benjamin ran around shoving it in everyone's faces to get their opinion (and there were several faces to shove it into because my mom and Josie were there to pick up Miriam for her organ class).

"No! It doesn't smell like dog poop!" he argued.

"Well, Benjamin," my mom said. "After poop dries out it doesn't smell anymore."

I made him throw it out and wash his hands and he's since stopped looking for wildfire souvenirs.