We don't often take advice from Aunt Sarah (especially recently) but when we do, we visit the Scipio petting zoo! She visited the zoo with some secret "friends" shortly after being released from jail last year and recommended that we take our children there sometime.

Honestly, I don't know that this attraction is worth the drive for its own sake (it's not) but it's certainly worth stopping by on your way through to somewhere else.

When we canceled our plans to explore Goblin Valley on our way home from Grover this summer (due to the Coal Hollow fire, which had closed down some roads we'd need to get home), everyone was a little disappointed, so Grandma suggested that we make a pit stop at the petting zoo on our way home, and that's what we did.

There was a good variety of animals to visit: sheep and goats, bunnies, emus, a baby zebra, some zonkeys, a camel, alpacas, llamas, and some tortoises.

Here's Grandma showing Zoë how to be brave around the goats: 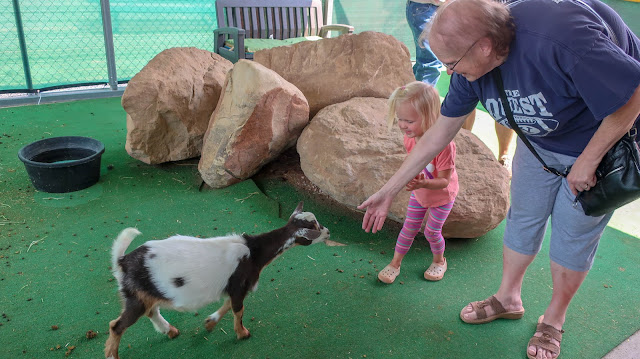 The keeper let the children feed the alpacas, which we didn't take any pictures of, and which the kids weren't very excited about because, frankly, feeding an alpaca a few nibbles of grain through a fence seems terribly boring compared to having a train of alpacas following you around, begging for nibbles of grain, or eating carrots out of your mouth (and since we'd just done those things at the Circle Cliff Ranch the kids' perception of what constitutes an animal adventure was skewed).

But then the keeper handed me a handful of grain and asked if I wanted to feed the camel. Here he is, briskly coming out to visit us now that he knows we have treats for him (or her; I honestly don't know): 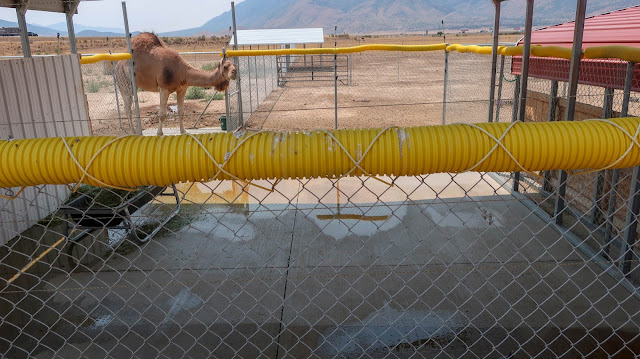 "I don't know," I said apprehensively to the keeper (because camels are huge and slightly disgusting). "Do they have top teeth or are they like alpacas and llamas and only have a palate?"

He looked at me quizzically (dude, we just visited the Circle Cliff Ranch, okay?) and said, "No front teeth. He'll kind of lip the food off your hand."

That I can do. It was a weird feeling. I still think camels are huge and disgusting (sorry camels). 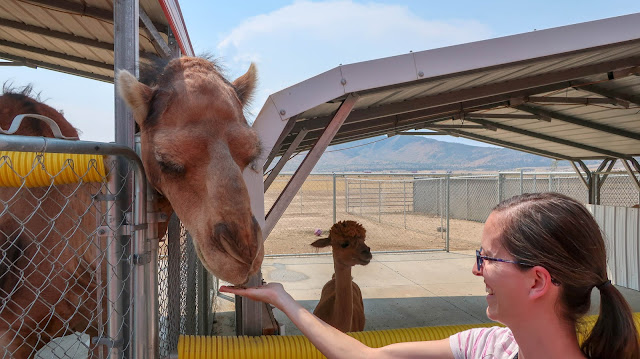 Here's Grandpa and Alexander looking through the fence at the camel: 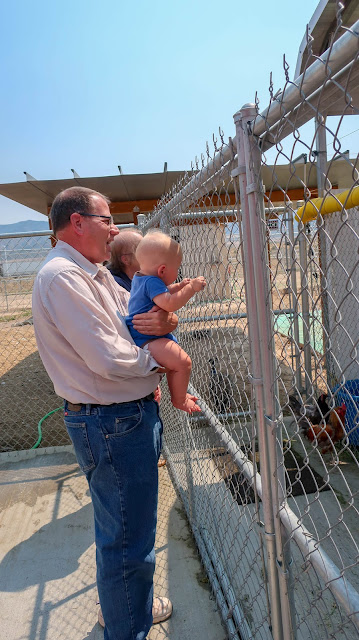 Here's the zonkeys, a hybrid of a zebra and a donkey: 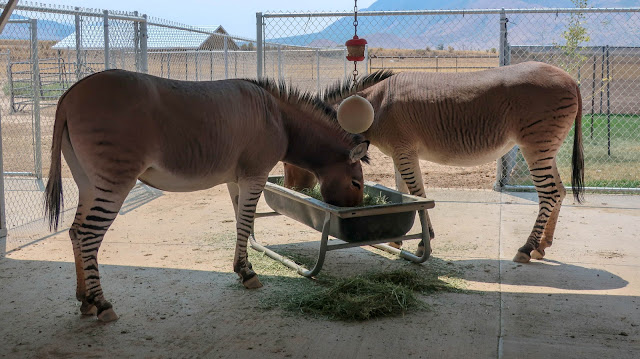 And here's the sweet baby zebra, only a few months old: 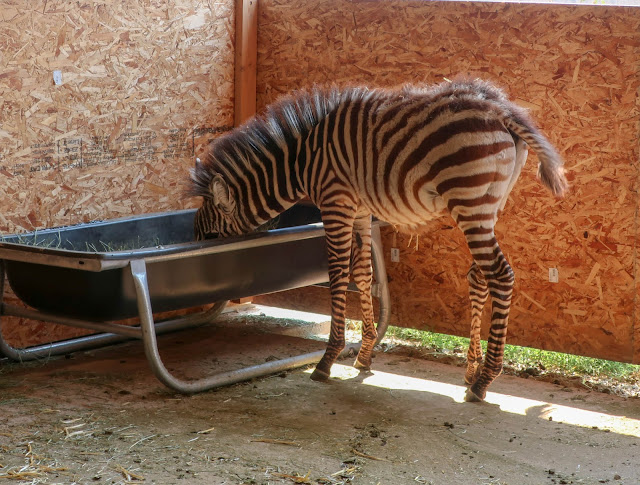 And here's Alexander completely ignoring the zebra because there was a fan on the ceiling or something: 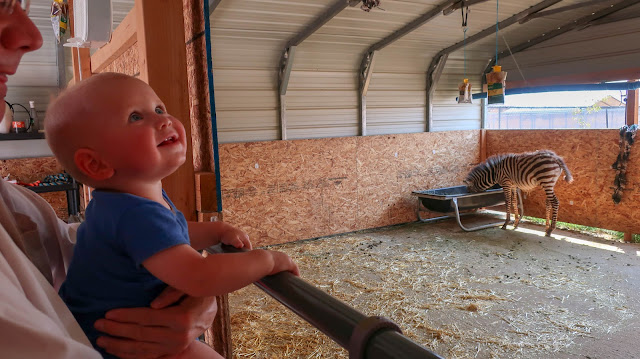 Zoë was rather excited to see real llamas (after finding out alpacas weren't llamas she had been a little disappointed in the Circle Cliff Ranch), not that you can tell from her picture: 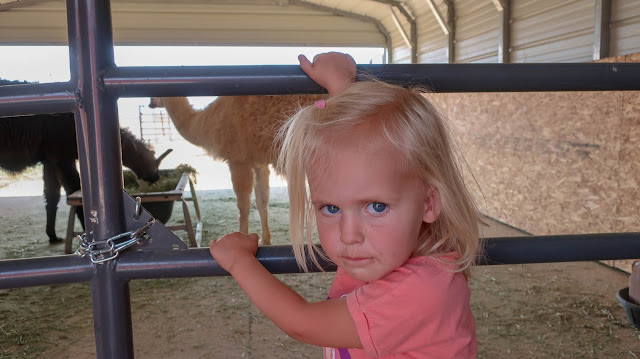 It was a nice place to stretch our legs (and feed a few camelids and get some ice cream for the children). It was surreal to drive into our smoke-filled valley. Of course, we're getting rather used to having a smoke-filled valley as of late. The Bald Mountain fire has merged with the Pole Creek fire and together they've consumed between 75 and 90 thousand acres of land (this number changes depending on which source you read). Every morning our valley wakes up choking on smoke, yet every afternoon the winds shift and our valley clears right out. It's nice...and not nice...at the same time.

"Is it good or bad?" people ask about Sarah being sent to prison.

Let the record show that no one ever wanted this for Sarah. I mean, when you're rocking your baby to sleep you daydream about their first step and first word and first day of school, of graduations and missions and weddings and grandbabies, of whether they'll be a teacher or lawyer or world-famous organist. You never look down at their sweet face and think, "Aw, and some day (if we're lucky) we'll get to watch as you're handed a prison sentence."

No, no one wanted this for Sarah (to say so would be ludicrous).

No one ever dreamed she would use her agency this way.

In fact, I can tell you about each time I learned she'd been arrested—the my throat would catch, the way my stomach would drop, the way my mind would spin because I honestly cannot understand why she would make the choices that she made.

On January 24th, I was at home when I got the email from Karen breaking the news of Sarah's arrest to us before the news cycle did. I'm sure I stared at the screen, slack-jawed, for far too long. That evening after Andrew got home we phoned his parents and chatted with them about all the unknowns. There was a lot we didn't know. We were new to this whole world; it was like walking off a cliff.

For all we knew, Sarah had been the model mother, teacher, homemaker.

Only a month before we'd opened individualized pillow cases from her. She'd appliquéd each niece or nephew's name on a pillow case—on both sides of the family!—and mailed them on time for Christmas. She'd just been featured in the school newsletter for her impeccable teaching skills. She took a picture of her sweet baby boy heading into nursery, which she shared on facebook.

We had no inkling of the double life she'd been living.

It was all very shocking and the biggest emotion I felt was, honestly, sorrow. My heart broke for her. Here she'd had everything—a husband, a child, a career, a house—and in one fell swoop (or swell foop as I'm wont to say because that's a phrase I simply can never say correctly) she lost it all—her husband, her career, her house, the opportunity to raise her child.

And that idea was unfathomable to me. I cried a lot (also, I was very newly pregnant and didn't know it so I cried a lot a lot (dern hormones)) thinking about how she must've felt (still having no inkling about her double life) for having had such a tragic lapse of judgement.

On January 25th my mind was all over the place. I went to brunch at my friend Amy's house, completely forgot about early-release day (but managed to get home in time to meet my kids at the bus), and then took the kids hiking. I cried watching them play. Zoë is only a couple months younger than Riley and I could not imagine not being able to put her to bed at night. I couldn't think of anything I would ever trade that for...except for, like, maybe one night every once in a while because what mother doesn't dream of a break every now and then? But being stripped of the right—the privilege—of story time and lullabies and tucking-ins?

My heart was breaking for Riley and for Sarah and for everything around and in between.

My sympathy for her waned as the details surrounding her case emerged. She had made a calculated decision, albeit a poorly calculated one, and the consequences she received were neither cruel nor unusual. On the contrary, the courts were rather generous, offering her an olive branch, so to speak.

She was released on probation for her offenses (and came to live with us for a few months, which is not an experience I'd care to repeat). Here was her chance to turn over a new leaf. Instead she dug herself into a deeper hole.

On July 2nd while we were driving home from Canada, Andrew's parents reached out to us to inform us that Sarah had been caught dealing meth and would be heading to jail again soon . They'd given her until July 4th (maybe the 5th?) to report, I believe). The dichotomy of emotions we experienced while hosting a family barbecue for the Fourth of July was rather surreal. There we sat merrily munching watermelon and corn on the cob and watching fireworks, knowing that the sounds of our country celebrating its freedoms were the same sounds heralding Sarah's next stint in jail.

Again our hearts were heavy with concern for her—how must that feel, knowing you're about to sign over your freedoms while fireworks are dazzling the nighttime sky with loud proclamations of, "FREEEEEEEEDOM! HEY! HEY! HEY, EVERYBODY! WE'RE FREE!"

Because that's totally what fireworks say.

From the outside, surely, they sound jubilant, from the inside I imagine their cries sound much more like mocking.

So we were dumbfounded when she was arrested again for the same charges—possession with the intent to distribute—knowing full well what was on the table: her freedom.

Obviously there were other factors at play here, other than sheer willpower. Sarah certainly falls under the category of drug addict, so I don't think she could necessarily be expected to stay away from drugs without significant outside support. I'm not a drug addict, myself, but I come from a family of addicts: alcoholics, pain medication, and probably more illicit stuff as well knowing some of my uncles. I've watched people suffer through their addictions; I've suffered because of choices the addicts I love have made. I don't understand firsthand addiction, but I know it's nothing to be trifled with (which is why we've had several family night lessons on our family's predisposition for addiction (and why we'll have several more lessons before our children are grown)). I understand why she would seek out a high but why she would continue to deal drugs is beyond my comprehension—when everything was on the line!

This time—August 22—we were all up to our elbows in peaches when we got word of her arrest. Already I can't remember if we were trying to can them or if we were making fruit leather or what. But I do remember that my attention was again drawn to the stark differences between our two realities. There I sat in my cozy kitchen, peeling peaches with my family for our family to enjoy months down the road. Before we got the phone call we were laughing and joking, I'm sure, but suddenly laughing and joking feels like an absurdity. The mood in the kitchen went somber really quick.

I think that whenever a loved one gets hurt, those that love them experience heartbreak, too.

Our impulse is to want to shield them from the pain, or at least lessen it somehow. We try to catch our children when they fall and if we miss, we hold them close and kiss their owies better. We habitually strap them into car seats and helmets, we scan the shoreline for dorsal fins, we put a baby gate on the stairs, we check the batteries in the smoke detector, we try to teach them right from wrong. We try to strike that delicate balance of allowing our children sufficient opportunities to stretch and grow while simultaneously steering them away from obvious dangers, because watching loved ones suffer hurts immensely.

But how do you protect someone from danger when the danger is themselves? And what if they are also considered to be a danger to society?

I honestly don't have an answer to that first question, but, unfortunately for Sarah, the answer to the second question is prison and all that's left for us to do is find room in our hearts to forgive and pray that she comes out of this sentence softer instead of harder.
Posted by Nancy at 2:20 AM