The kids' soccer schedule changes from week to week, as far as what time their games are at, so some days are more hectic than others. Today certainly ranked up there. This Thursday will probably be worse.
If Ron were to see me, he'd probably echo the words he said to Hermione in chapter fifteen, "I reckon you're cracking up. You're trying to do too much."

And then I'd fumble for my time-turner (which I clearly so desperately need) and would sneak away for a nap.

Unfortunately, I'm not Hermione and I don't have a time-turner so instead I'll just take some deep breaths and count down the number of soccer games left and be so grateful that (a) live so close (and/or with) our grandparents and (b) Rachel's best friend is on her soccer team so we've been able to carpool with her family a bit.

My mom picked Miriam up right after school today so that they could get to BYU in time for a teacher improvement class my mom is attending, which meets before Miriam's organ class. Miriam got to tag along to that, which she said was rather thrilling because, "they treated [her] just like one of the grown ups!" She got the handouts, participated in the discussion, and did all the exercises.

One of them, if Andrew remembers correctly from when he did this inservice, was a syllabus improvement exercise. The assignment was to write non-stop for four minutes about why the class you're supposed to be teaching is important and then to review what you wrote and underline emerging themes.

Here's what Miriam wrote about her purely hypothetical course (since she's not a university professor...yet):

My mom told me that another exercise had them write down three reasons they went into teaching and then they had to share their reasons with the group. Miriam only shared two reasons (I'm not sure what they were) but didn't share her third reason. My mom shared it for her, however, and later messaged me saying,


I hope Miriam was not upset that I added her third reason for wanting to be a teacher (that she likes to be in charge) in our meeting today. I don't know why she left it out. I think it is an important consideration. Can you imagine a teacher who didn't want to be in charge? Chaos! I think that her desire to be in charge, to be responsible, is a good quality for a teacher to have.

I don't think she was upset at all. She had so much fun going to a meeting for university professors and then attending her first real organ lesson.

She had orientation last week, but that didn't count as a real lesson because they didn't even get to play the organ. Here she is seated at one of the organs in the lab anyway: 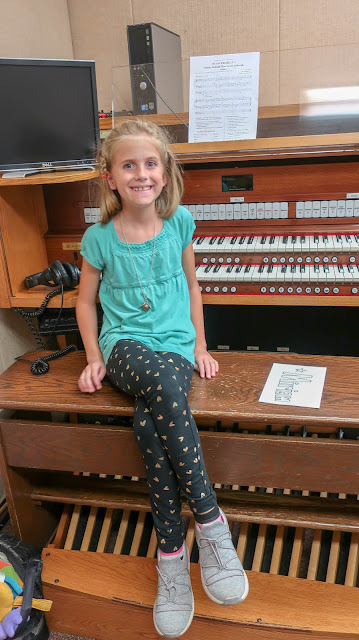 Andrew brought her home when he had finished teaching and she had finished her class (so that he could run Rachel and Tayah to soccer because I was already at soccer with Benjamin and the little kids) and she was so excited to get to practice her assignments on Grandma's organ!

It's definitely fun to have our kids be involved with so many activities and opportunities, but—oh, boy!—am I ever glad we only have five more super-packed days this month!
Posted by Nancy at 2:37 AM