I drove the children to school this morning. It's so incredibly smokey outside that we woke up with our lungs hurting and I didn't want the children exerting themselves too much. 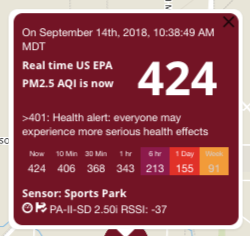 Aside from a brilliantly red sunrise, our sky isn't very interesting this morning. It's simply hazy. Everywhere.

Benjamin this morning yelled at everyone to come look at the sun because it was violet. What he meant was scarlet. A cute little friend of ours remarked, "Someone changed the colour of the sun! I think it was Jesus!"

Yesterday we could still see blue sky when we took Benjamin to soccer. Alhough we could see smoke ominously billowing out of the mouth of the canyon, the winds were in our favour and the haze clung to the mountains, which meant our air quality was rather decent.

I knew, however, that when the winds switched directions in the evening our valley would fill up with smoke, which meant we wouldn't be spending much time outside. That's why I said yes to playing at the playground after Benjamin's soccer game (even though I had a meeting at the church that I completely forgot about).

Here are a few views on our walk. To the south-east-ish (I'm directionally challenged): 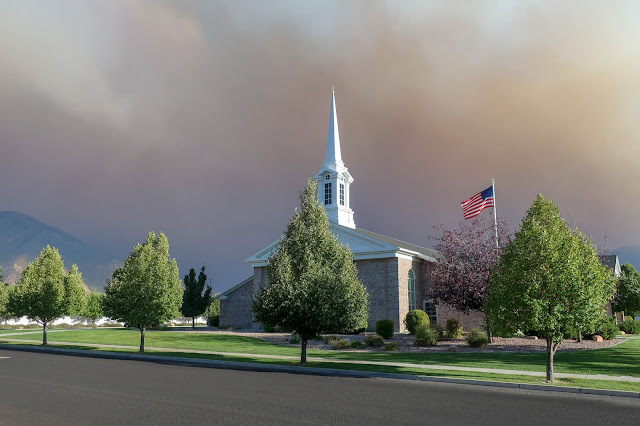 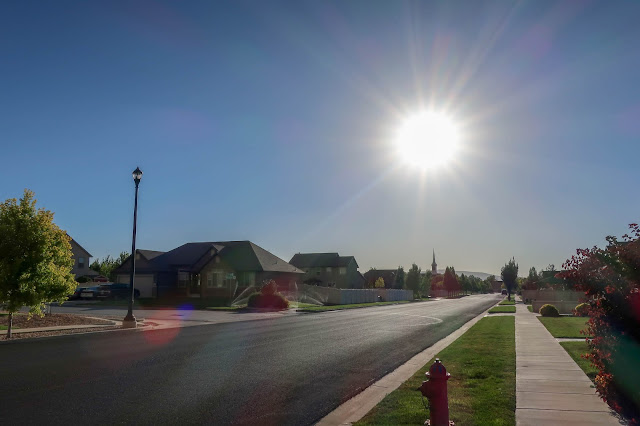 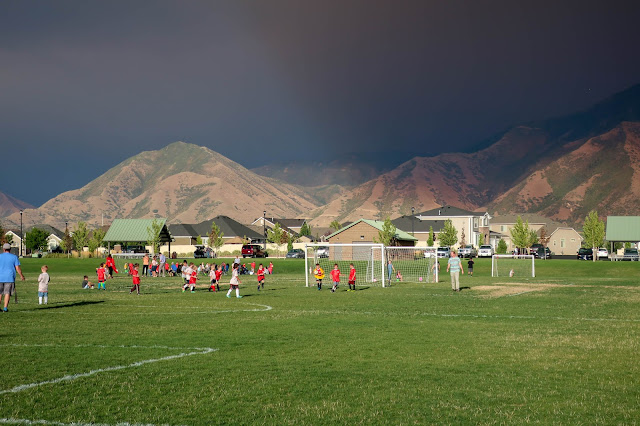 I guess I should have zoomed in more. He's the kid with the bright green soccer cleats. Also, I should probably note that he's not really playing soccer. Everyone else is playing soccer. He was playing quidditch (pretending to be Angelina Johnson (because she scores the most points)) so was completely unaware of what was actually going on in the soccer match. I mean, he did improve his hustle a bit (he was dashing all over the field and was as sweaty as could be) but, like, he wasn't ever really in on the game.


I guess that's okay though because I can't even tell you what's going on in this picture:

Here is Zoë looking like she's summoning a storm of wrathful vengeance: 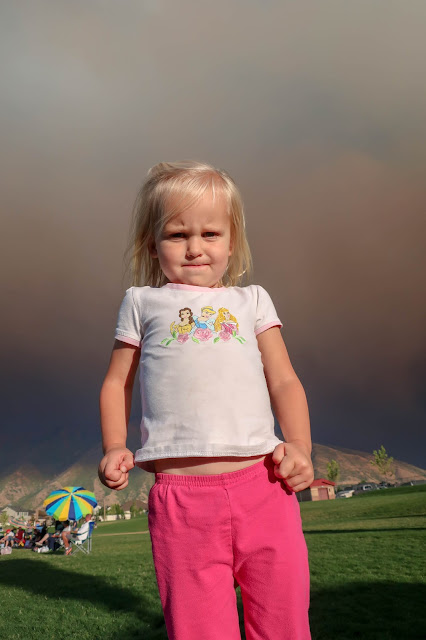 She's really a sweet thing, though: 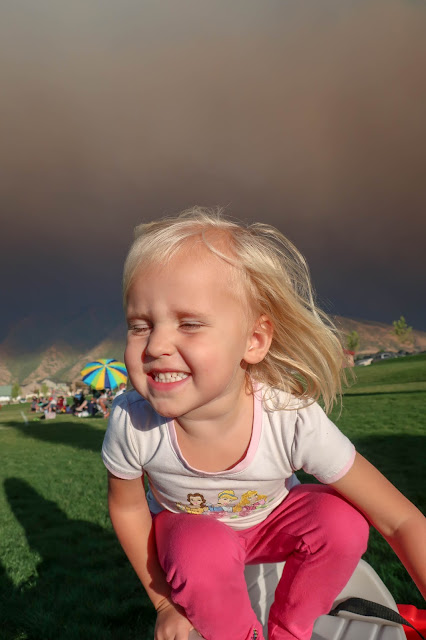 When the sun started setting, the smoke turned an eery orange: 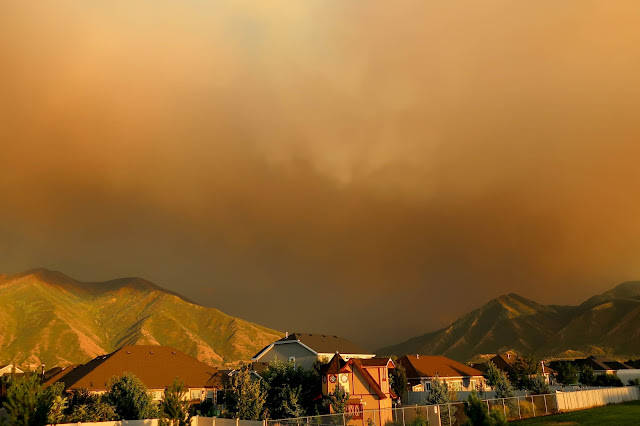 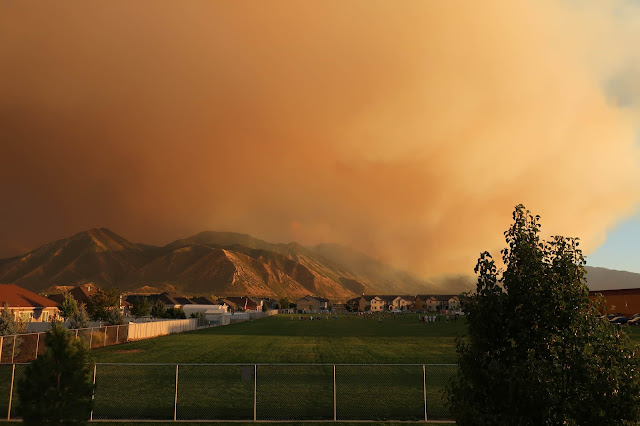 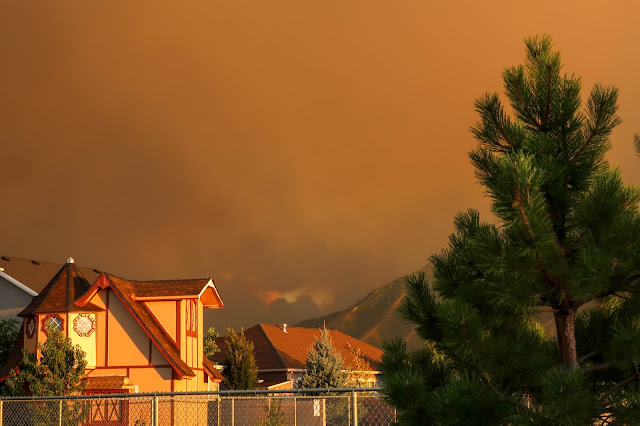 And here's a shot of the kids playing together: 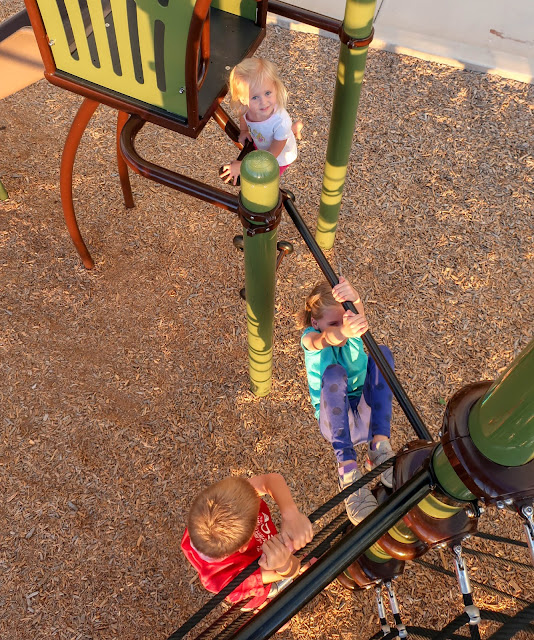 It's a good thing we went to the park because getting outside to play a sport with a family member was one of Miriam's homework assignments. When I first heard she was going to have homework every week I was a little put off by the idea, but, honestly, her homework assignments are kind of neat. She has to read, of course, and tell her teacher something interesting that happened to her that week. She's also assigned a household chore to do (so far this year: set the table, make your bed, dust the living room) and either an activity to do or something to discuss as a family.

I can get behind that idea of homework, even though we forgot to get out as a family to try a sport together. I had wondered why Miriam asked me if we could do yoga together in the backyard after school one day this week.

The problem is that after school time has been so busy! We won't even talk about T/Th, but M/W weren't really much better because I had to help Benjamin and Rachel with actual homework (ew) and we just forgot to get outside to play together, so Miriam counted our time at the playground as gymnastics (we did have races up the spiderwebby rope thingy and did some legitimate gymnasticky things (plus the spirit of the assignment was to get outside with your family and we did that part)). 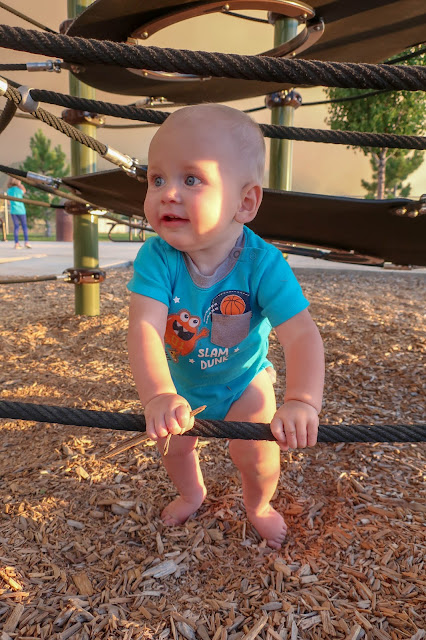 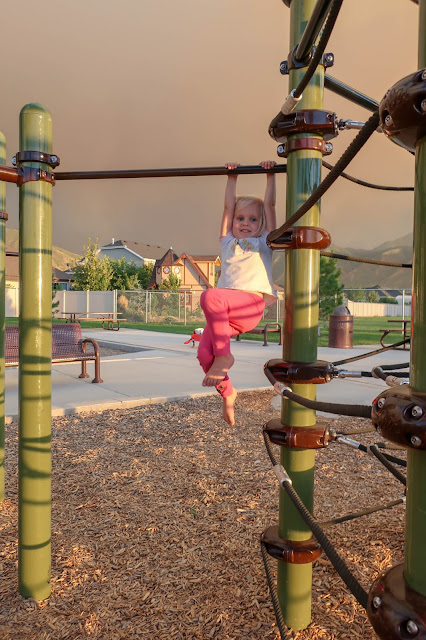 On the way home, Zoë wanted to pull the wagon instead of ride in it. The pictures are all a little blurry/unfocused, but I think they capture the fun of the moment...sort of... 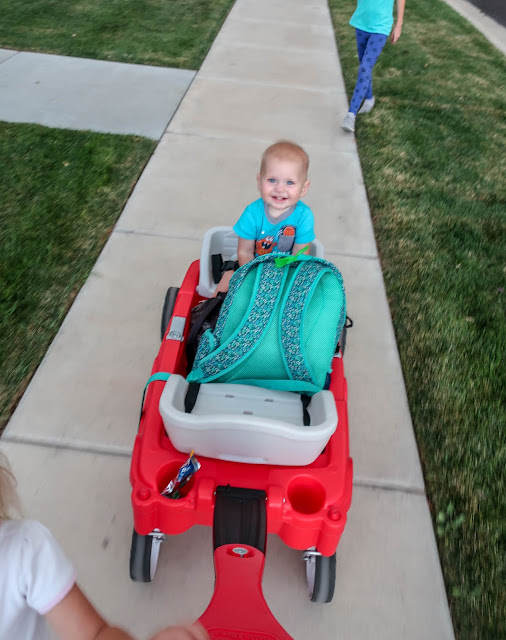 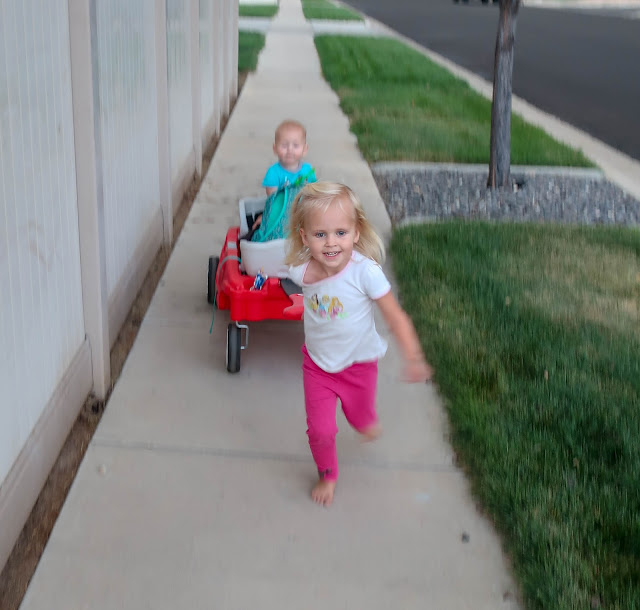 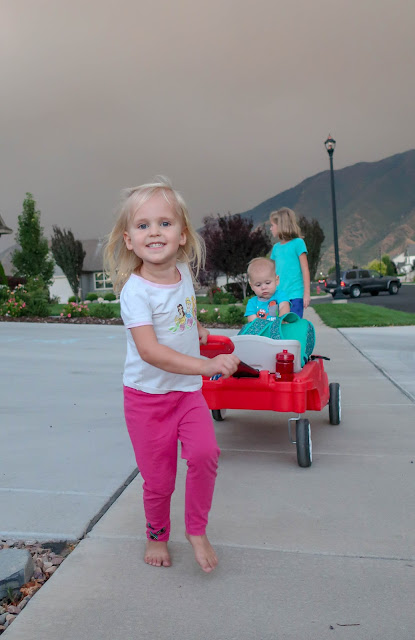 Here she is after she got tired out: 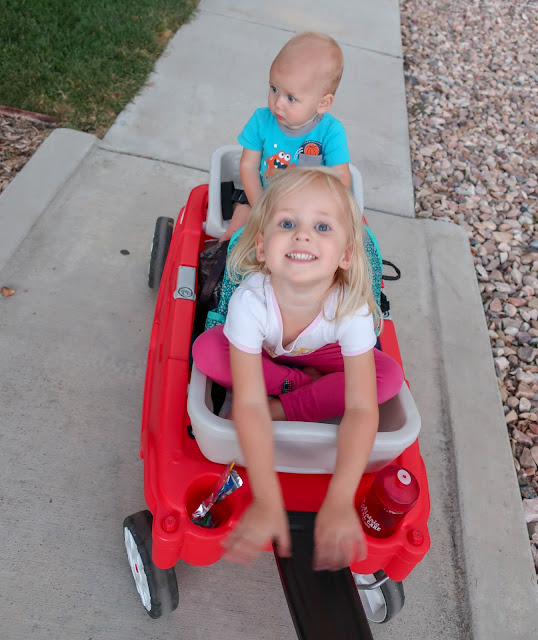 When we got home and I checked my phone I noticed that I had missed a text message from the ward executive secretary, asking if 7:30 was still going to work for me. Since it was 7:42, clearly it was not going to work for me, so I texted back saying that I had forgotten but that I could head over right then. They said that was fine, so I asked Rachel (who'd beaten us home) that I had to run to the church "for a minute," told the little kids that they had better have pyjamas on when I got home (or else!), and bolted out the door with the baby.

"Why do you need to go?" Rachel followed me outside.

"I just have a meeting at the church," I said.

"Just because," I said as I dashed across the street.

Keep in mind we live 60 seconds away from the church. Soon my phone buzzed. It was Rachel, texting me.

"Why are you going?"

"Cuz" I texted back.

I didn't have time to respond because by that point I was already at the bishop's office (getting a new calling (a church assignment). I checked my phone on the way home (because I'd heard it buzz again). It was Rachel.

"Are u coming back?"

I laughed to myself and just walked home. She was waiting for me, with her face smooshed up against the window of the door.

"Were you that worried?" I asked her.

"Well, I didn't know why you were leaving and you were gone a lot longer than I thought!"

I was gone ten minutes. She'd managed to convince Benjamin and Zoë to get on their pyjamas and Zoë had even brushed her teeth. So we had scriptures and prayer and sent the little ones off to bed and then Rachel had a shower (because she really needs a shower after soccer these days).

And now we're all choking from the smoke that's settled in our valley.

Our air quality is now only 177, which means, perhaps, that the winds have shifted again and are busy ushering all this smoke back up through the canyon (poor people on the other end of the canyon). Perhaps we'll get down below 90 and the kids will be allowed outside for recess (though I doubt it). Several communities have already been evacuated—Elk Ridge, Woodland Hills, and Covered Bridge—and parts of our own city are on pre-evacuation orders (though we are not so we should be just fine). I can't imagine having to evacuate.

Our thoughts are also with our friends in North Carolina, at this time, as they are bracing for and/or being slammed by Hurricane Florence. The pictures of our favourite beaches—Topsail, Carolina Beach, pretty much every beach—are making us sad. New Bern is completely flooded. Durham was in line of the storm in earlier predictions, but now it seems they're out of the direct path so hopefully everyone will be alright (but it's sure to be rather rainy (wish we could have some of that rain here (*cough*cough*)).
Posted by Nancy at 2:47 PM