My little brother's all grown up and moving to Greece this Friday to begin a graduate degree in Cultural Heritage Materials and Technologies at the University of Peloponnese in Kalamata. A bit of a mouthful, but terribly exciting!

We had planned to have a farewell party for him on Sunday, but then he ended up having to go back to San Francisco to sort out an issue with his visa (you can only apply for long-term visas in person), so we cancelled the party. Rosie and Austin didn't get that memo, though, so they showed up on Sunday, anyway. It was wonderful to get to visit with them but they were probably shocked at the state of our kitchen.

Rachel, Miriam, and I had arrived home from stake choir practice mere minutes before Rosie and Austin showed up. We'd missed out on having dinner with Jacob, Shayla, and Carter (unfortunately; though I hear a good time was had by all). Riley was over as well. That made for four kids three and under, which made for quite the mess (as Auntie Emily can probably testify to since that's pretty much her daily life). The kitchen was a disaster, but Rosie and Austin came in to visit and have a sample of Rachel's raisin bread anyway (Rachel has made bread (in the bread machine) every Sunday the last few weeks: just a plain loaf at first, and then an apple pecan loaf, and then raisin (she has big plans for this Sunday—a "spring" bread recipe that calls for orange zest (she's very excited about that part))).

I'm happy to report that the kitchen was much cleaner for today's party!

(Probably still not perfect, but at least better than it was on Sunday).

We spent the first little while outside playing. Our air quality has been top notch lately, getting up into the hundreds at time, but usually below 90, and well below 400+. It feels great to be able to say, "Go outside!" to my kids again!

Anyway, we have a badminton net set up in the backyard right now. Andrew brought it home a few weeks ago after he and Rachel had gone shopping for soccer cleats. I'd mentioned wanting to get a set to play while we were at Grover (because horseshoes isn't really my jam) but we couldn't find summer-fun toys anywhere. It was a nice surprise. So, the net is up and the kids have been going out every day after school and sometimes when Alexander isn't terribly whiney I join them. We played a bit of badminton this evening, in between our visiting. 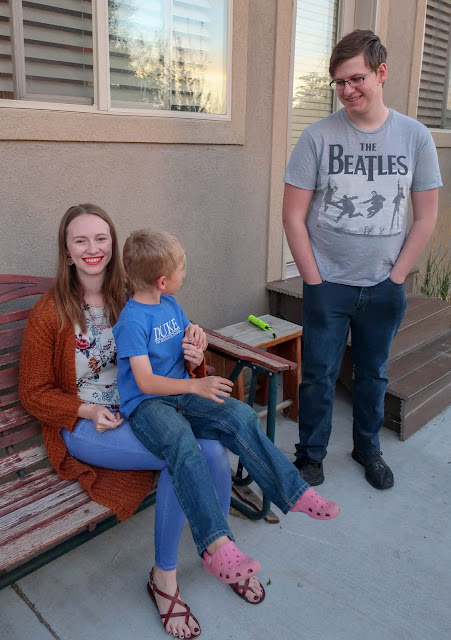 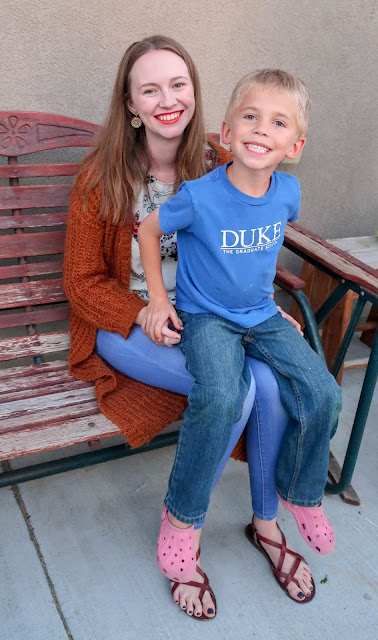 Benjamin was a little worried about Rosie marrying Austin (because he wanted to keep her all to himself) but has since warmed up to the idea of having Austin around. And Austin is very patient with Benjamin's...enthusiasm. 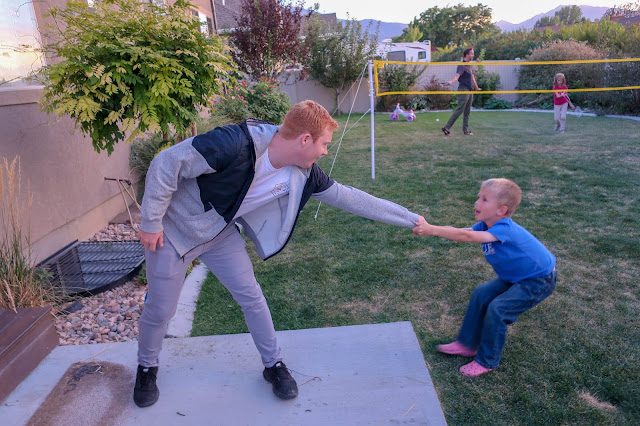 Zoë was also rather thrilled to have Rosie come over for a visit: 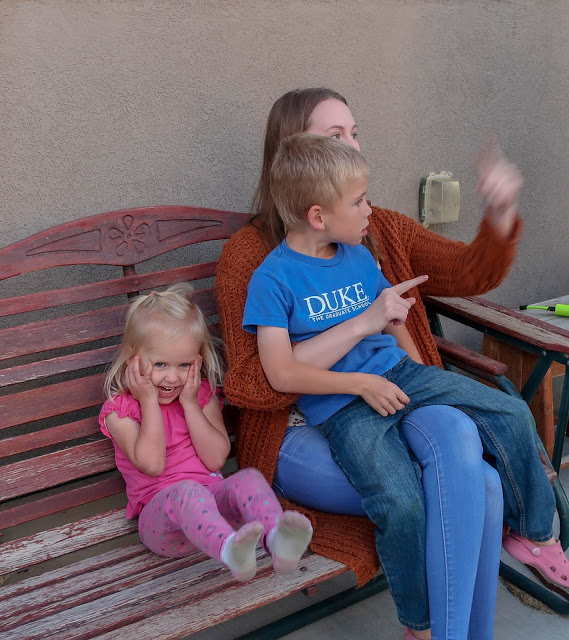 Those two—Zoë and Benjamin—got so riled up. They were running around, chasing, screaming, tickling. At times it was entertaining. Other times it was, you know, slightly annoying. That's how things go. Here's a time when something was funny:

Our blue ball popped, which made the big kids sad and the baby happy (because now he can grab onto it): 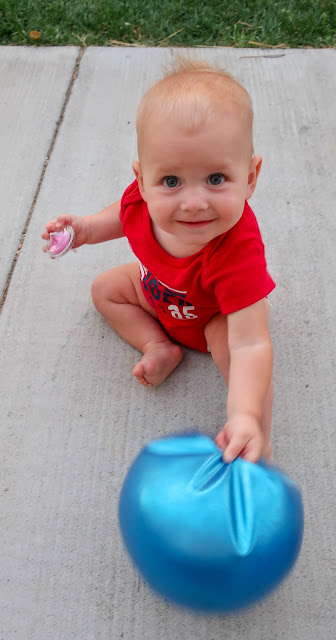 Benjamin and Zoë may have gotten riled up, but at least they went to bed on time. Poor Alexander was so overstimulated that he couldn't settle down for bed (though he did eventually go down, thank goodness). I think it was mostly Benjamin and Zoë's rowdiness that had him all worked up, to be honest, but it's not like they got that rowdy all on their own. They had their fun uncle around to torture them a little bit (and they loved every minute).


We stayed outside until it got too chilly (because we're finally getting some nippy fall weather): 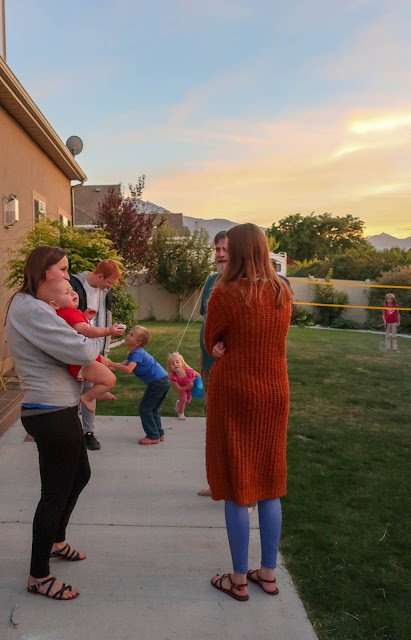 Here are a few shots of the diehards playing badminton before retiring indoors (it was Patrick and Miriam versus Rachel and Andrew): 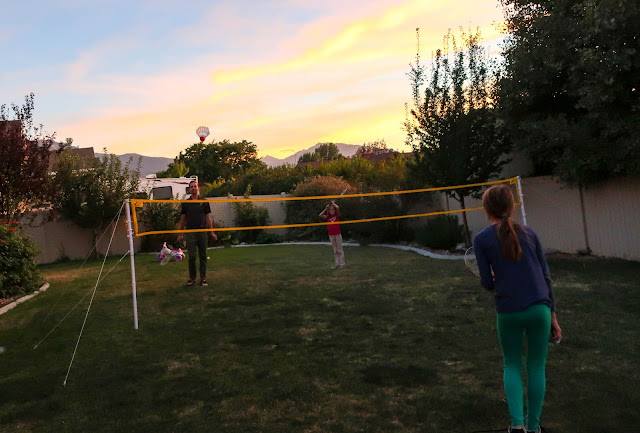 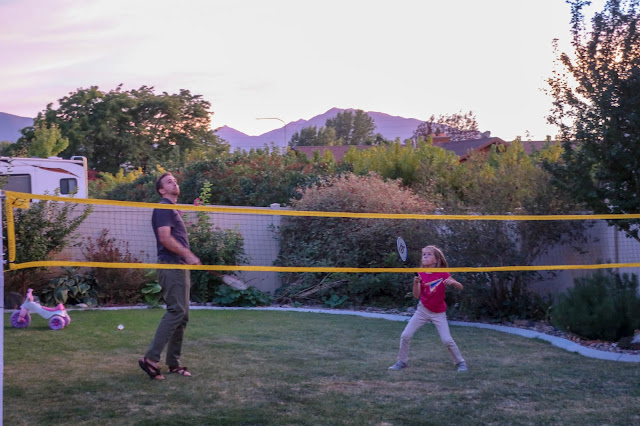 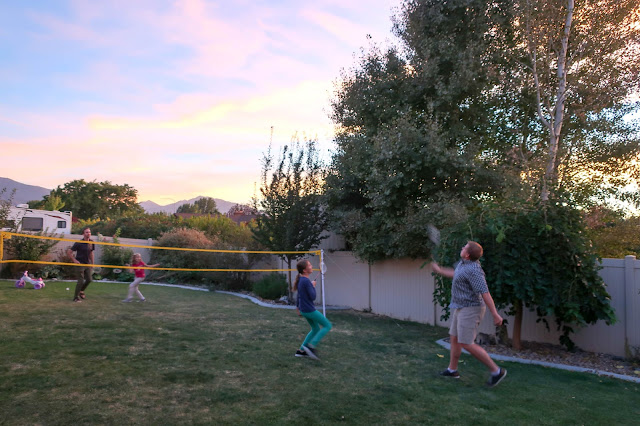 Inside, Benjamin was sad to be limited to only two cookies the size of his face: 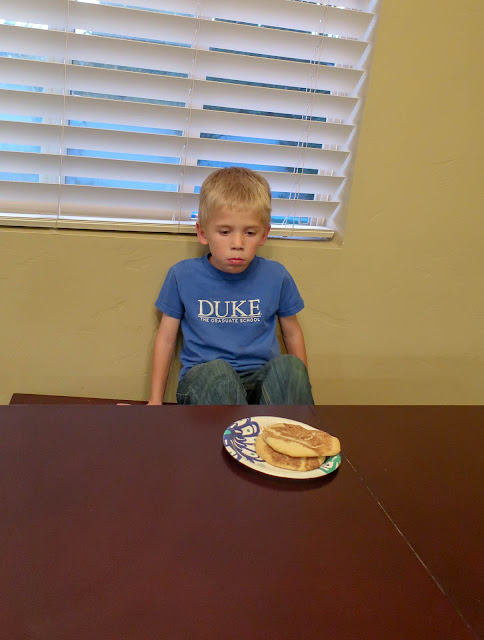 I'm sure he ended up eating a lot more than that, however, because he finished those cookies and went back for more. I made some peanut butter bars and put out some ketchup chips because those are two things I thought Patrick would probably have a hard time finding in Greece. My mom brought some strudels and cookies. And Andrew brought home a veggie tray. We ate well. 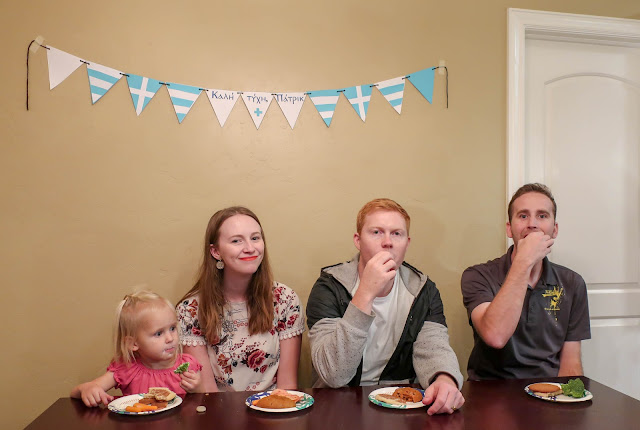 I made that banner for Patrick. It says, "Καλή τύχη, Πάτρικ!" or what Google Translate tells me says, "Good luck, Patrick!" The Cyrillic alphabet draws heavily from the Greek alphabet so it's fun for me to try to read Greek though I don't often know what anything means. It's all Greek to me! Patrick will pick it up fairly quickly, I'm sure. He also enjoys studying languages.

Here are a few group shots that Karen took of us (I included several because Benjamin and Zoë were goofing off the whole time (you can see Zoë trying to take her cues from Benjamin; she likes to copy everything he does): 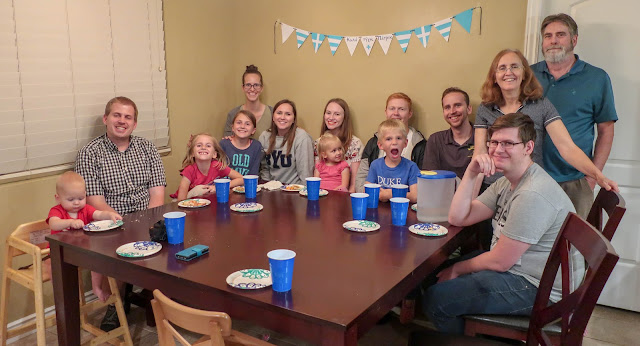 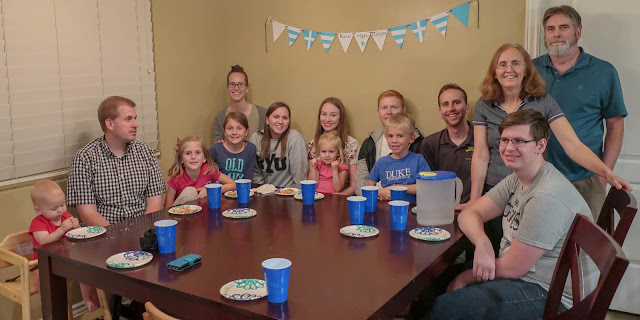 * No offense intended. It's supposed to be a play on My Big Fat Greek Wedding except with my little brother who is in no way fat but who is bound for Greece.
Posted by Nancy at 3:12 AM