Only Rachel and Benjamin are playing soccer this season, and, of course, I'm using the word "only" lightly because they're both playing on the same day, naturally, which complicates things immensely. As luck would have it, however, Rachel and her good friend Tayah are on the same team so we've been able to carpool with them.

So I've been taking Benjamin to soccer and the girls will ride with either Andrew or Tayah's family, though I suppose I should, at some point, go to one of Rachel's soccer games since she's the one most invested in soccer. Watching Benjamin is a bit painful, he's quite aloof out on the field, which is surprising because he begged to do soccer for a full year (we didn't do soccer at all last year), but also not surprising because he's a six-year-old boy.

Here he is not paying attention to what his coach is saying (in the green camo shorts): 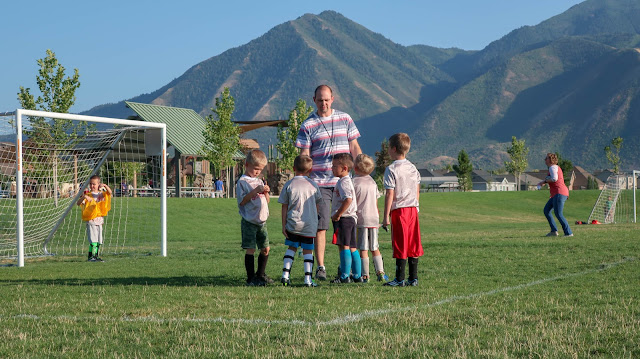 He's much more interested in pointing out airplanes, observing seagulls, and hunting through the grass for interesting things than he is about soccer. He does enjoy palling around with his friends, however, and that's good because play dates are kind of hard to get these days. Everybody is so busy with organized sports (such as soccer) that no one is ever available to just play. So while some people might sign their kids up for soccer so they can get good at soccer, we signed our child up for soccer so that he could goof off with his friends (sabotaging any hope their team had of ever winning a match, I'm sure).

Here's Benjamin coming off the field for a little break: 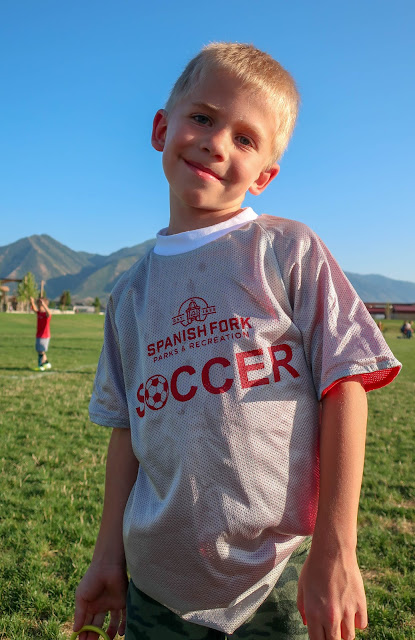 He sure is a cute little soccer player, even if he has no idea what he's doing: 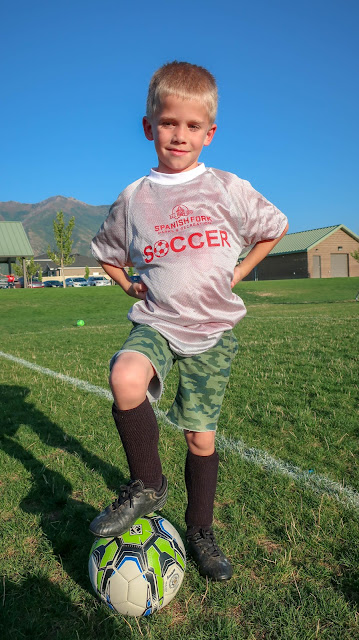 Not that that is entirely his fault. They don't really have practices in this league. They just have two games per week. That's all. I guess it's a learn-as-you-play system, which is fine except that Benjamin is a bit behind in the learning process. You can tell because he has a new jersey. At least, I'm assuming his is the new style of jersey since I just got it for him last week. Everyone else on his team has an old jersey, which means they've played in this league before. 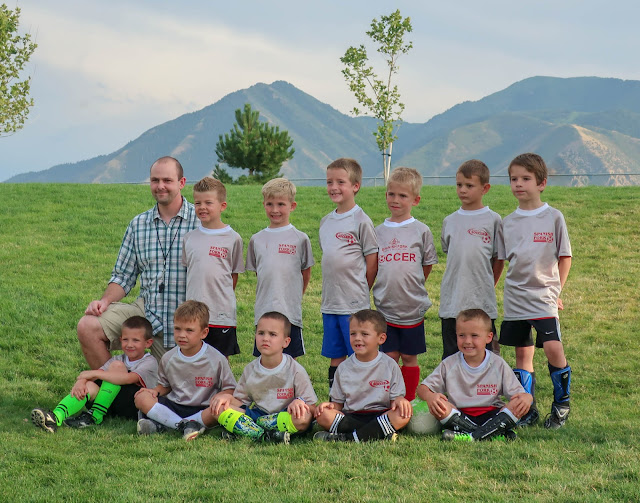 The teams had their pictures taken yesterday and the poor photographer had no end of trouble trying to get Benjamin to have a somewhat normal face. She kept saying, "Okay, that's a real cheesy smile in the back there. I need you to relax a bit. Give me a softer smile." I suppose it's possible she wasn't talking about my son. But then again... 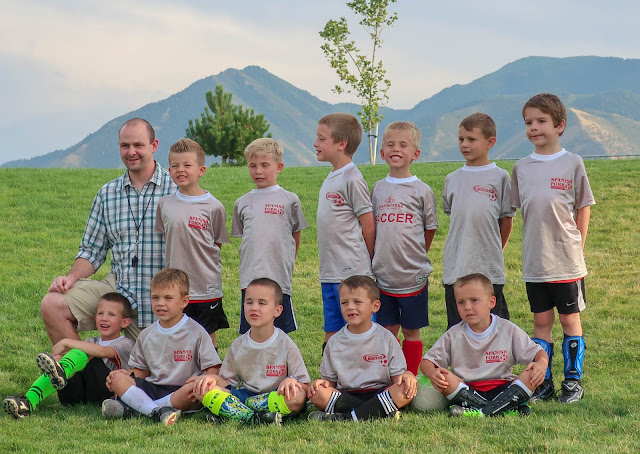 The cheeser was definitely mine.

Andrew and Rachel stopped by our field to snag the camera on the way to Rachel's game so that Andrew could take a picture of her team together. She went ahead and made a nervous face, as she's prone to do in front of the camera:

Her team is in red simply because they were assigned to be red that match. The league's jerseys are reversible, so they're red on one side and grey on the other side and their schedule dictates what side of the jersey to wear on which day. That's a way of doing things, I suppose, but I kind of miss getting a new jersey every season.

I swear half my children's wardrobes were soccer jerseys when we lived in Durham.

It was so nice to pull up at the field and not wonder where your team was because you would just look for the right colour and head that direction. And the colours were usually epically neon so there was really no question about where your team was.

Here you have to look at the schedule, make sure you wear the correct colour, and make careful note of which field you'll be playing at because every little field looks the same. I'm really not sure I'm an enthusiastic enough soccer mom to survive that kind of chaos, but, luckily for me, the soccer season is a measly five weeks long (which means we only have three weeks to go (not that I'm counting)).

Anyway, here's Rachel (who is suddenly turning into a surprisingly smart, sweet, and accomplished young woman): 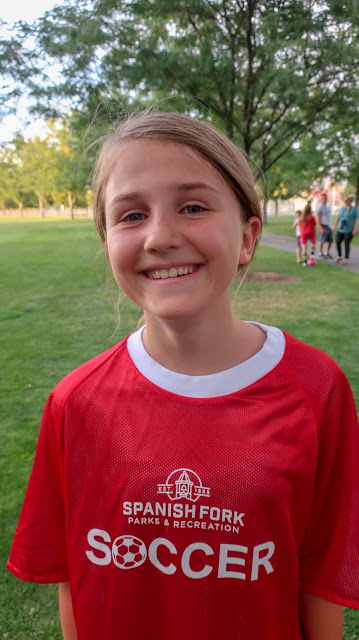 Her team is so far undefeated, so that's pretty cool!

And what do the rest of us do during soccer? Well, we watch the game a little bit, play around at the park, do homework, and chat with each other. It's good to get out for an evening stroll (though Andrew might disagree because apparently he got eaten alive by mosquitoes over at Rachel's field; over at Benjamin's field we had a very pleasant evening).

Here's Alexander playing with his toes and clapping his hands: 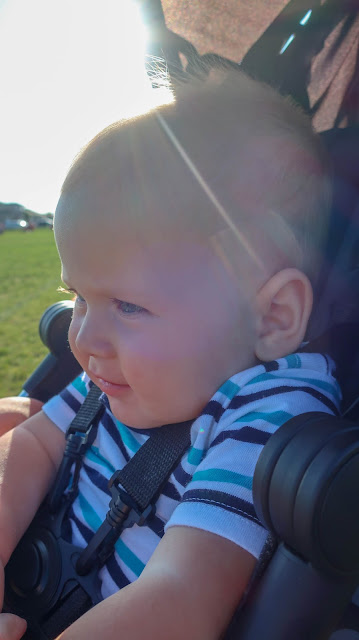 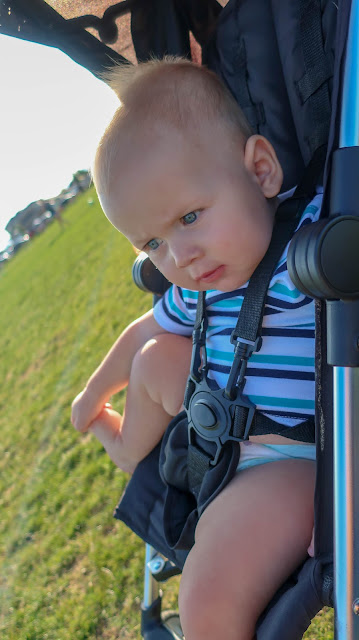 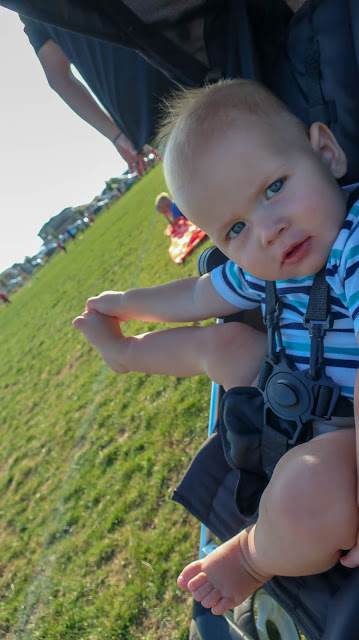 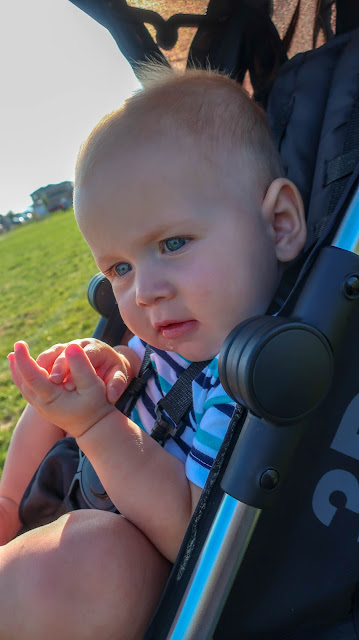 Here's Miriam giving a big, brace-free smile (don't get too used to that look): 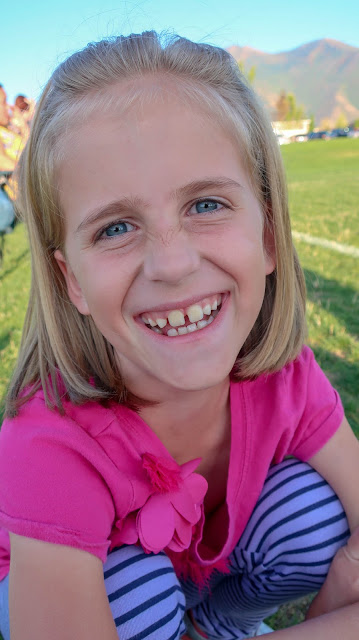 And here's the fierce pirate, Zoë, bellowing "Yo-ho-ho!" from the crow's nest of her pirate ship: 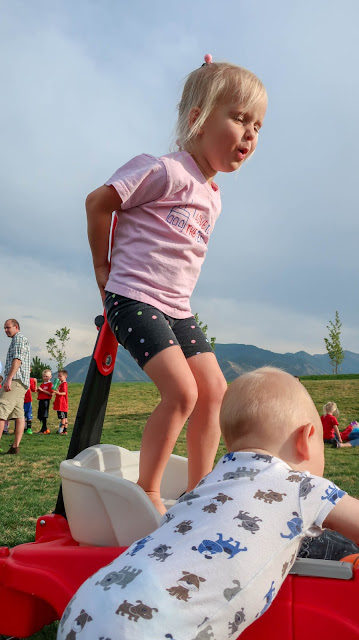 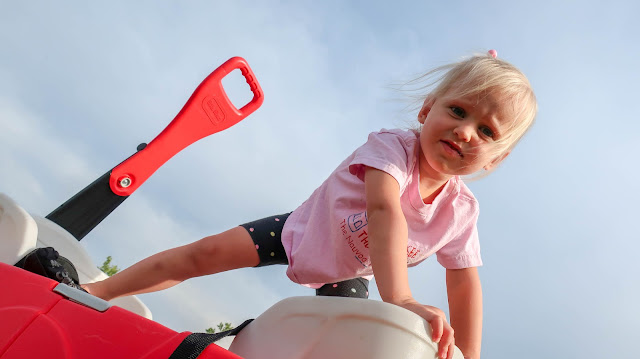 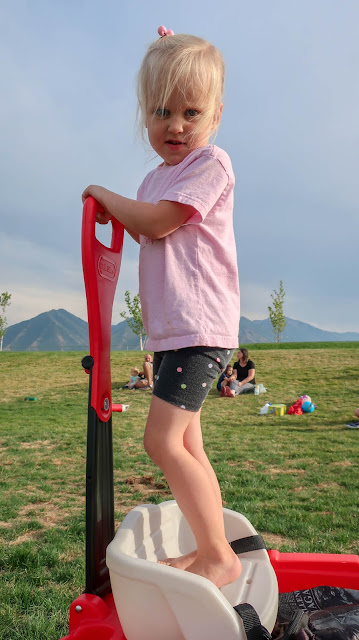