"There's a ginormous orb weaver on the front porch," Andrew said after he'd run outside in the rain to make sure all our weather-proofing measures were still solidly proofing against the weather.

Naturally we all had to run out to see if it was a run-of-the-mill orb weaver or whether it was a jorō spider. It was a jorō spider, which I must say I was much happier to see in the woods than on my front porch! These spiders are so big!

I had Miriam hold up a ruler beside it so you could see just how big it is. She did her best to not hit the web with the ruler, but be close enough so the spider and ruler were on the same plane. I think the ruler is only upstaging the spider by a centimeter or so here (she did end up accidentally hitting the web with the ruler, which made it scurry away a bit, so she was really close): 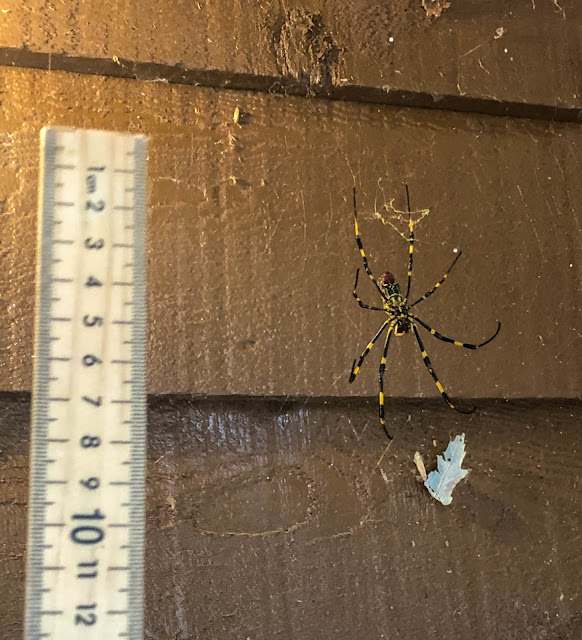 This spider does look like an ordinary garden spider (like zigzag or writing spiders) but it's (a) bigger, (b) doesn't keeps its legs in an x-position while resting, (c) has red markings on its abdomen, and (d) produces yellowish silk. 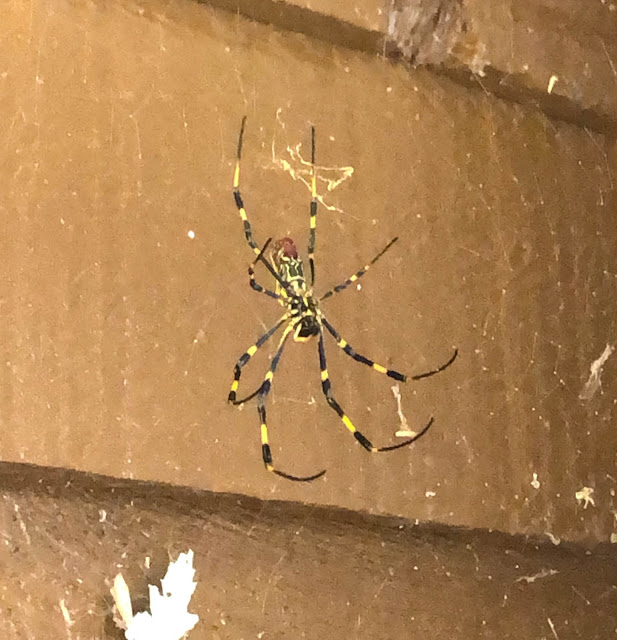 This particular jorō spider is, like the one we found in the woods, a female, but her abdomen is a lot narrower than our woodsy friend's was. According to my research this is either due to recent feeding habits (because the abdomen is "covered in a much thinner and more flexible cuticle material made of chitin, which allows the abdomen to expand and contract during feeding") or due to gestation (because he female holds the eggs within her abdomen for "1 week to several months after mating" and "as the eggs develop in the female, her abdomen enlarges").
So we'll see what happens with this jorō spider, because I'm not sure I want a million jorō babies on my front porch. But I'm also not sure that I want to squish a spider this big.
This is a big spider, guys!
Posted by Nancy at 4:36 PM