Today was quite the momentous day for our family. We finished reading the Book of Mormon—our first time ever reading it (as a family) within a single calendar year (it has forever previously always taken us two years to get through it). We'll be focusing on having a Christmas devotional every evening now, which will be nice.
It stormed the evening of Thanksgiving, a wild thunder-and-lightning storm and I asked Andrew if he thought the southern superstition that a winter thunderstorm brings snow would hold true. He scoffed at the idea—after all, we live in Georgia now, which is farther south than North Carolina. So while that idea may have been accurate in North Carolina it was unlikely to remain true here.
"Is that claim scientific?" Benjamin asked.
"More anecdotal," I told him. "But cold fronts do frequently follow a thunder storm, which is why the anecdotal evidence exists at all, so it's also kind of scientific."
"But mostly an old wives' tale," Andrew interjected.
"Yes. But also scientific."
Now, we didn't notice the snow flurries because we were far too busy trying to make sure no one wound up with stitches to pay much attention to the weather (even though our house is abounding in windows), but I have seen several reports of snow flurries on Facebook. So it did, indeed, snow within ten days of a winter thunderstorm.
For family night we worked on some linocuts. Miriam and Rachel finished the ones they began months ago (but left neglected once Miriam sliced her finger open). It was good for them to shake off that fear and get back up on the horse. Benjamin was ecstatic to be allowed to use the knives (he's been begging me for a pocket knife for years now). He was carving away, very proud of himself for never nicking his fingers (or the table...unlike some people I know (me; it was me)) and announced with satisfaction, "I finally feel successful at something!"
This poor child has been trying to find a real talent for years now but nothing he's tried has felt like something he could excel at—sports, music, drawing...everything is difficult for him and/or doesn't seem to turn out the way he'd like. He's been determined, though, to find a talent. And tonight he feels like he's pretty talented at making linocuts, so I'd consider tonight a success in our books. 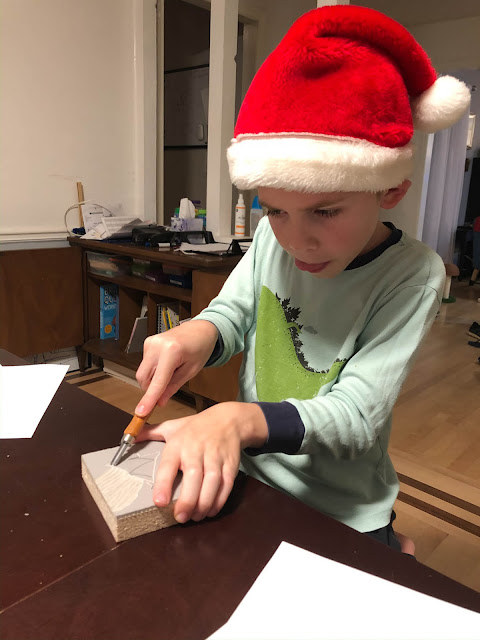 (For the record, I think Benjamin is endowed with lot of talents, both ones that he's already working on and others that he's yet to discover, but I'm glad he discovered another one tonight. One that felt natural to him (because he has to work really hard at other normal-people talents, like sitting still long enough to write a paragraph or focusing long enough to play an entire piano piece (if you lose focus while carving you can just put your knife down for a moment and pick up right where you left off—no harm, no foul—but when you're playing a piano your music teacher will make you play your song the whole way through...and that's hard when your mind wanders)).
He really did a great job this evening! 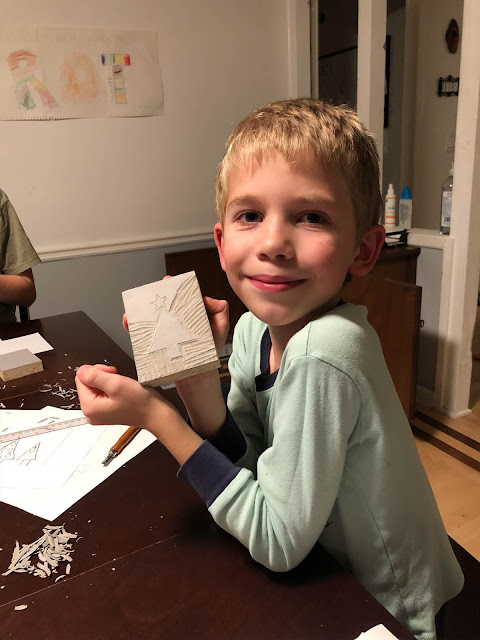 Here he is, inking up his print with Dad (who was the on-call helper this evening, bless him, running around the table fixing little problems for everyone): 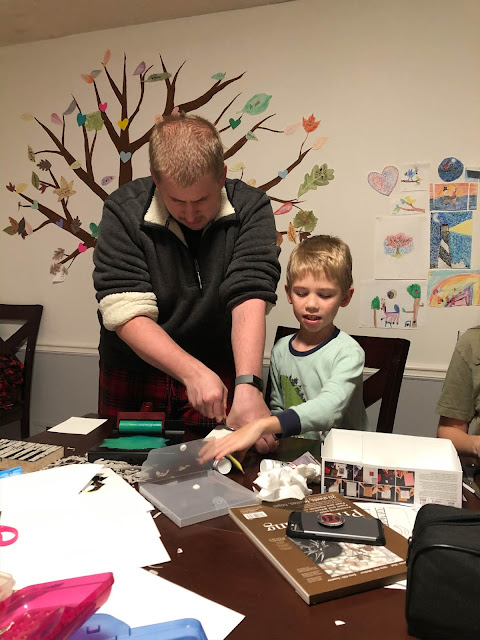 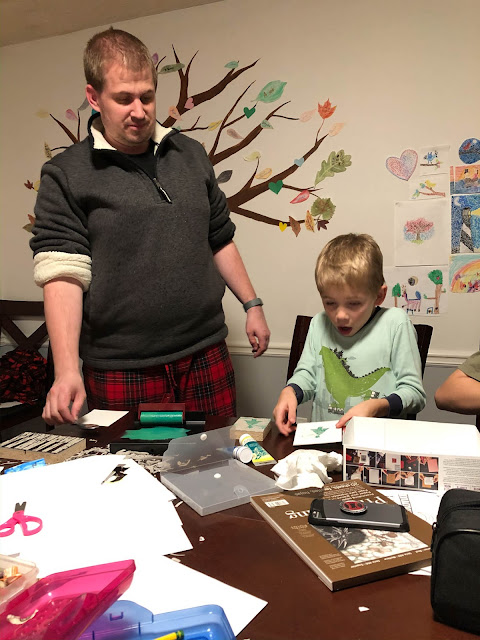 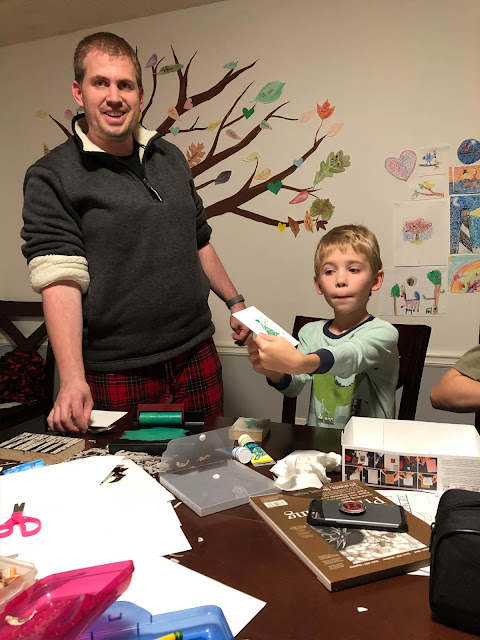 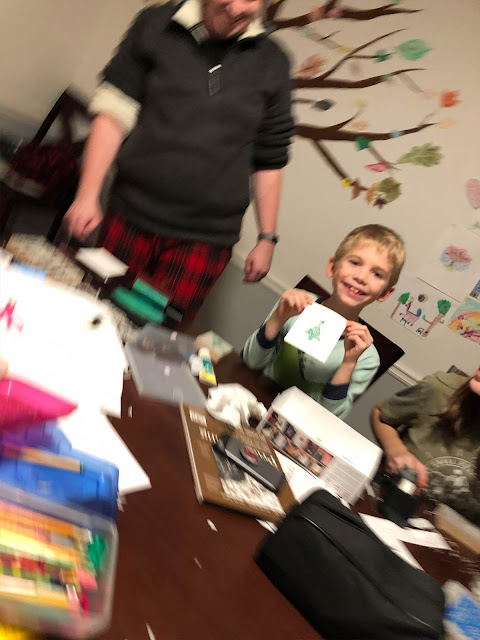 "Is there a job of doing this?" he immediately wanted to know.
"There is," Andrew said. "It's called...being an artist."
"Maybe I will do that when I grow up!" Benjamin said.
"Art can also be a hobby," his sisters quickly pointed out, which I was glad of because we do like a healthy dose of realism in this house. Art is wonderful, but you might also need something more sustainable. Uncle Rod is an artist and Uncle Rod is a carpenter and builds beautiful cabinets (because sometimes cabinets offer more reliable income than selling paintings does). 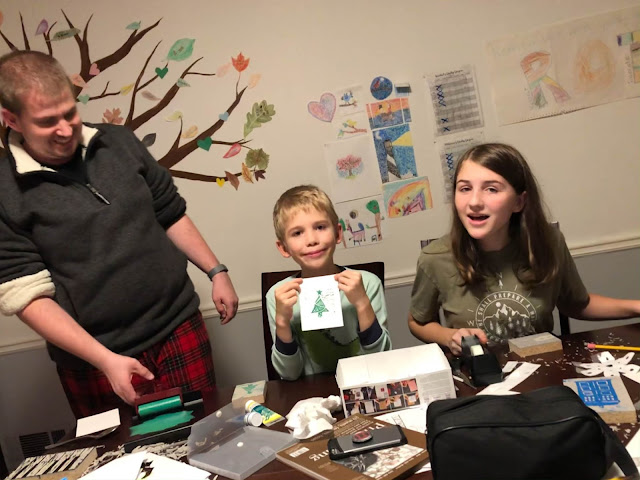 The boys mixed up that green by themselves (we only have primary colours, plus black): 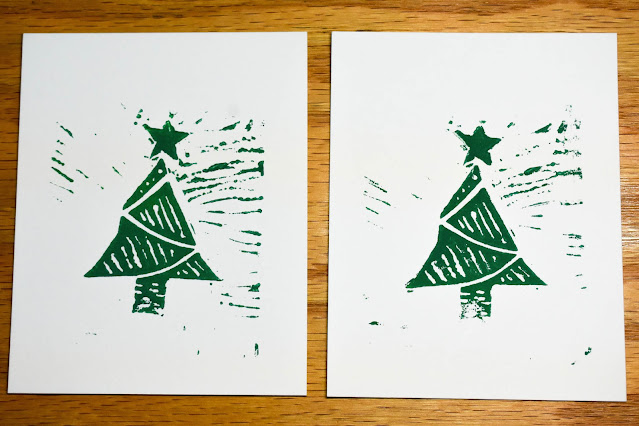 His little tree turned out wonderfully! Meanwhile the girls were all still hard at work on their linocuts, which were a bit larger in size than Benjamin's was. Here's Miriam taking a break: 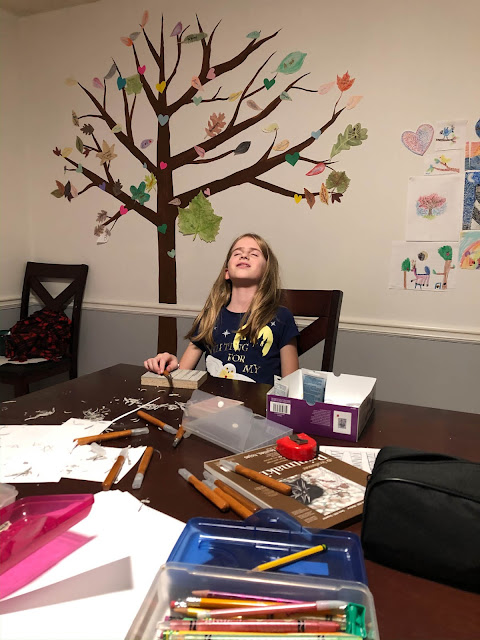 And here's her big reveal after making her first print: 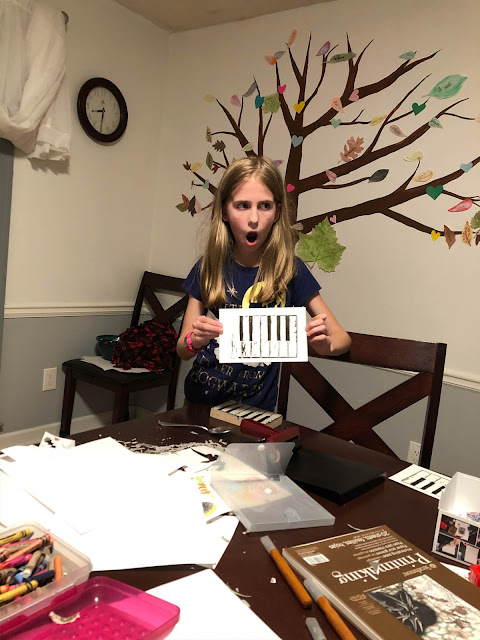 You can see from the clock that it's getting rather late in the evening (8:30). We didn't finish until around 9:30, which was rather late for poor Alexander. But, it was worth it. And—bonus!—we can count this as school time. Hooray for art class! 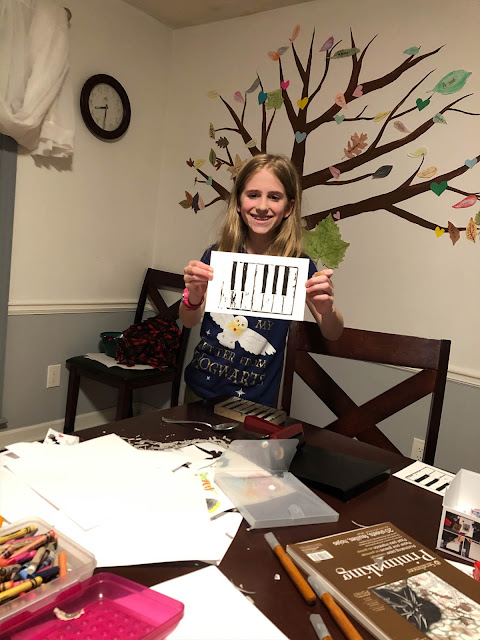 She's very excited to give one of her prints to her organ teacher. 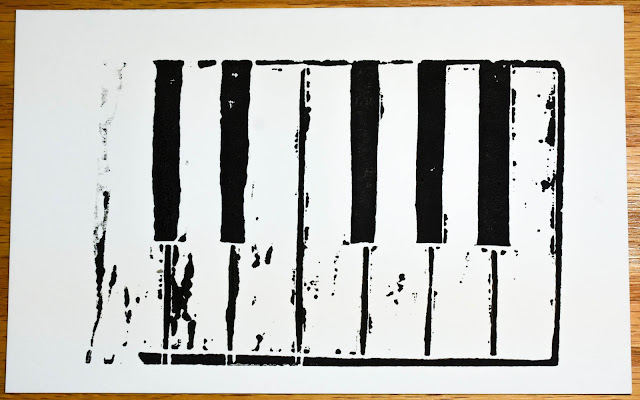 Rachel finished up the TARDIS she had been working on and began working on a snowflake (which she did not finish). 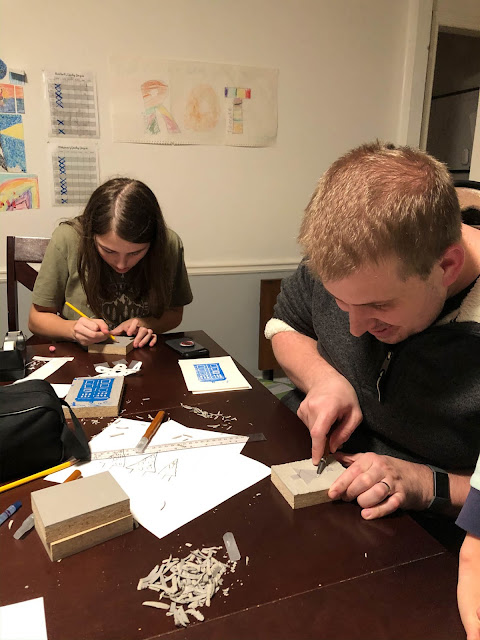 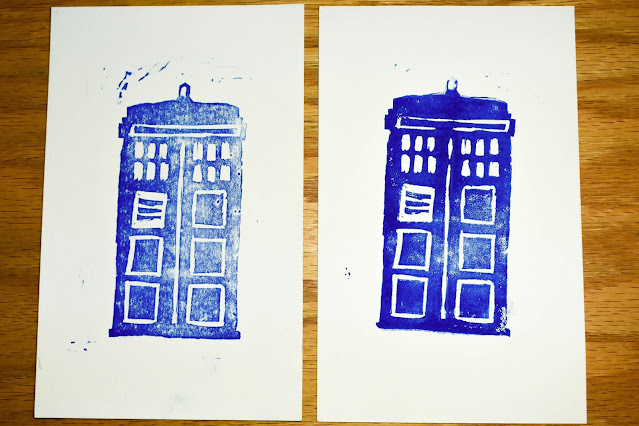 Zoë and Alexander didn't get to make linocuts, but they did do a lot of drawing and colouring and cutting and gluing. 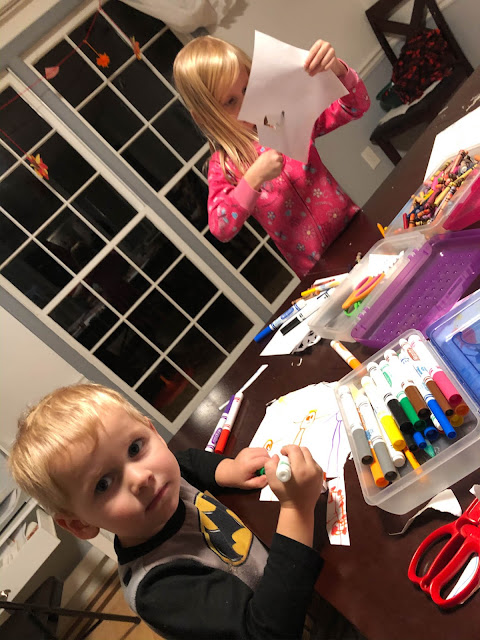 Alexander stuck a pencil behind his ear. "Lite you bumtime do!" he told me. And then he tried to draw with it while it was still behind his ear, which I've never done. Perhaps I'll have to try it "bumtime." 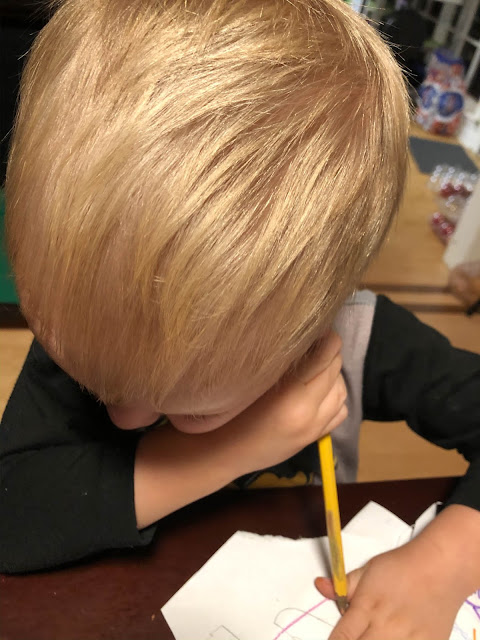 I designed a greeting card, which turned out alright. I was very proud of myself for so carefully carving all my letters backwards. 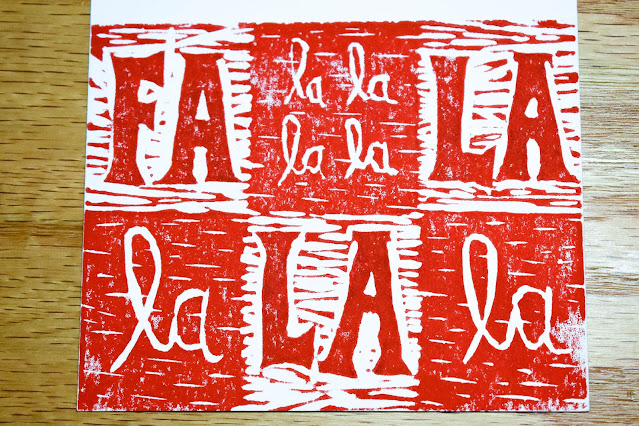 And, just for my own record (which this whole blog more or less is), my friend Tamsin challenged me (generally speaking) to make some art, so this past week I finally sat down and did it. I used our acorn ink and added some salt to give a starry night/snowfall impression, then I used sidewalk chalk to make some northern lights, and cut some aspen trees out of paper (giving them their "lines" with acorn ink): 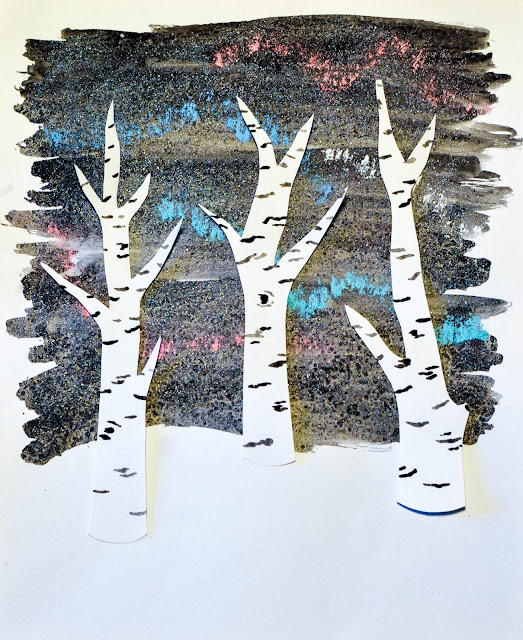 The kids all experimented with salt and watercolour paints while I did this and our dining room ended up one big salty mess. But messes are worth making, I suppose, because tonight's linocut adventure was a messy one as well, but everyone had a lot of fun!
Posted by Nancy at 11:17 PM