I don't think I ever really blogged about Canadian Thanksgiving, which was way back on October 12. Our Thankful tree was busy with birthday balloons for much of October. We did manage to get a few leaves up there but we weren't as diligent about it as we had been in past years. It's hard to keep up with everything when every day feels exactly like the one before it. 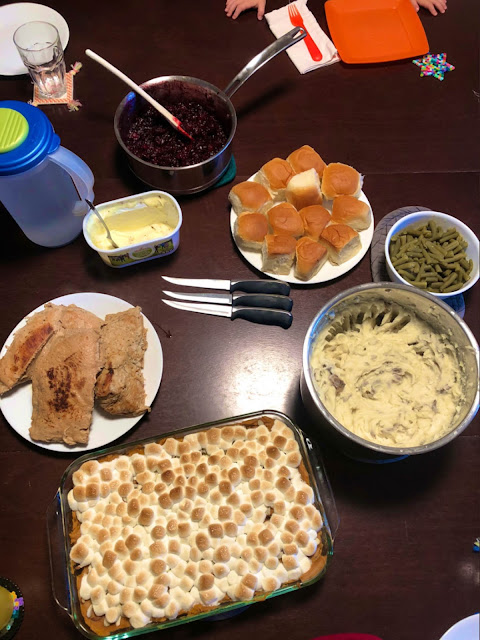 Rachel made the pies for Canadian Thanksgiving—she did pumpkin and apple: 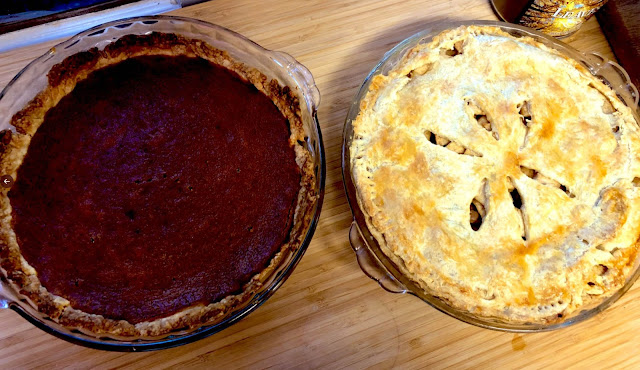 Andrew did the bulk of the cooking for American Thanksgiving as well, and by "bulk," I mean all. He enjoys cooking (even when it's something he doesn't particularly enjoy eating) and I'm very thankful for that because I...don't enjoy cooking for the most part.
He made a beautiful meal for American Thanksgiving (this time with real roasted vegetables, which were delicious): 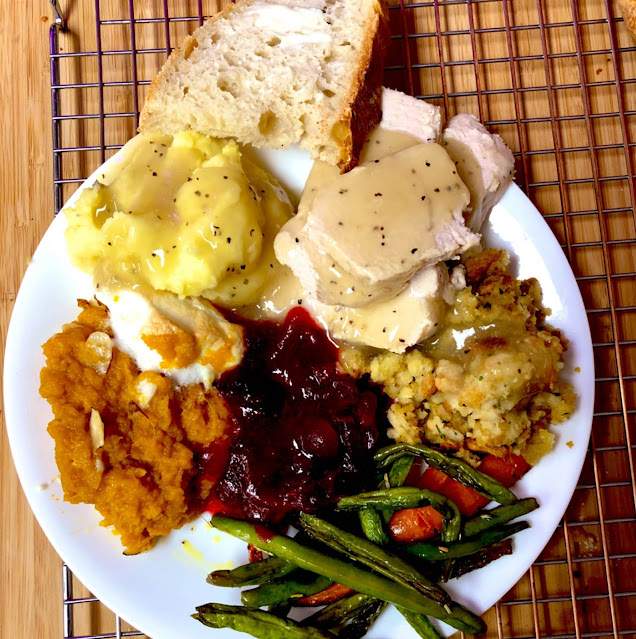 He patiently led the children through the creation of seven different pies! Benjamin made the Atlantic Beach pie, Rachel made the "yucky pumpkin" pie (right?), Miriam took the lead on the apple pie, and Andrew did the traditional pumpkin mostly on his own. I think....but I can't say for sure. I was hardly in the kitchen at all. 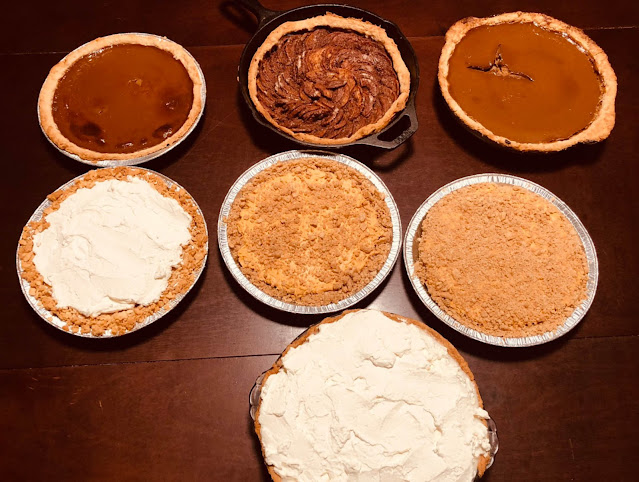 And that's very often how it is these days. Ordinarily I do quite a bit of the cooking since Andrew would usually be getting home just in time to eat, but since he's quit commuting he's been able to do the bulk of the cooking and...it's been wonderful.
Not only does he cook, more often than not he helps with clean up as well! I know a lot of families have an agreement where the person who does the cooking doesn't help with the clean up very much, but Andrew's not that way. He knows part of the reason I'd rather do a one-pot meal than anything fancy is because I don't particularly enjoy cleaning the kitchen (and you don't have to clean the kitchen as much if you don't get it messy in the first place, see?), so when he goes on a big cooking adventure in the kitchen he will turn on a podcast (or an audiobook or whatever) in the evening and have a little cleaning party in the kitchen by himself (usually while I'm forever putting the children back in their beds).
He's such a wonderful husband and father. I couldn't have asked for a better person to travel through life with and I'm just so glad, so grateful, so lucky that he's mine.
So I wrote a series of poems about him that will be published in my book of poems in the next couple of months. I can't believe it's finally happening (or that it's happening at all because honestly poetry is never what I expected to write) and it's happening in large part because of his encouragement and involvement (and he's going to typeset my book because he's amazing like that, but if you ask him how he got into typesetting and graphic design he'll say it's because of me, which is somewhat true because he only took that CHUM (computers in the humanities) class at BYU because I took it first and it looked interesting to him). I'm so grateful for the way he encourages me to try new things and/or hard things, but I'm especially grateful that when time and time again I fail (to meet my own expectations, usually) he's always there to encourage me to try, try again.
Here's one of the poems about him, in case you're curious:
The dream catcher
I grew up believing dreams
Were beautiful but useless.
Nice to have, but upon waking
They’d abandon you to reality.
I must be careful what I say
Around my husband, then,
For he is a dream catcher.
As soon as I give my dream a voice,
He snatches it and holds it fast,
He transforms it into a blueprint,
This engineer of dreams.
“Why not?” he’ll ask. “You should!”
He’ll say, “Let’s make a plan.”
“Do it! It’s not too late!”
There is an art to following
Your dreams, you know,
A formula of sorts.
You can learn it, but it’s hard.
It helps to have a good teacher
And a different sort of dream catcher—
The kind that opens their arms wide
To catch you when you fall awake.
The kind that helps you dream again,
The kind that knows dreams aren’t useless.
Posted by Nancy at 11:11 PM