Last night my family got together for a game night the only way we could—virtually!

David and Abra dialed in from British Columbia—Prince George and Langley, respectively (6:00 their time).

My parents, Josie, and Kelli dialed in from Provo and Layton, Utah (7:00 their time).

I believe this occasion marks the first time we have all managed to be on a call simultaneously. I also think it's the first time we have ever played a game together as one, complete family unit. There simply haven't been many instances when we've all lived—or have even been—under the same roof. I think the last time we were all together was either my Grandma and Grandpa Layton's 50th wedding anniversary (US, 2001) or my Grandma Conrad's funeral (Canada, 2003).

I know for sure that we were all together in 2001 (is that the last time Abra was able to make a trip down to the states?) but can't quite remember if Kelli went up to Canada for Grandma Conrad's funeral in 2003.

Okay, I looked it up the only way I could think of—by pulling out pictures of the event and, as it turns out, Kelli did manage to make the trip. So here we are in April of 2003: 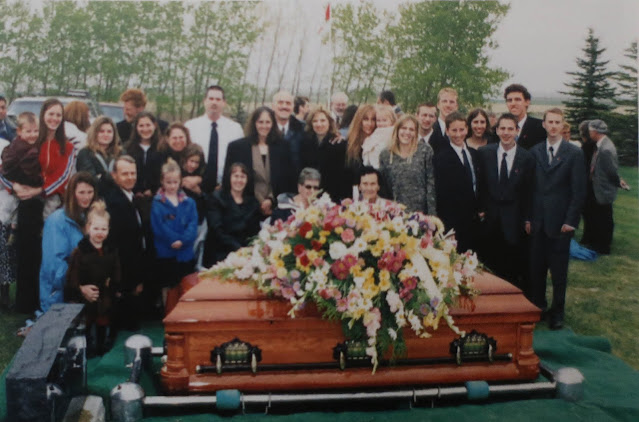 I am in the red sweater, holding my sweet nephew Deklan (who towers over me now). Kelli is kneeling in front of me, wearing a blue jacket, and keeping a hand on Piper. I think that's Rosie in the other blue jacket (about six years old, standing in the front). I think my Auntie Judy has Josie wrapped in a big hug (just behind Rosie). My mom is beside Judy, flanked by Bruces (my dad and my uncle). Patrick is in the cluster of suits on the righthand side of the picture, furthest to the left (beside my cousin Jenna). Abra is standing behind me, I presume, but her back was turned to the camera when this picture was snapped.
I wondered for a brief moment where David was because he is not in this picture. I scoured through all the others in the bunch before it finally hit me—Brazil! David was on his mission in 2003 when Grandma died, so he was in Brazil for her funeral.
That means 2003 doesn't count as the last time we ere all together. So is it truly 2001 that we were last all together? That means that in February next year it will have been twenty years since all of my siblings have gotten together. That's...a very long time (considering Josie is still in her twenties). 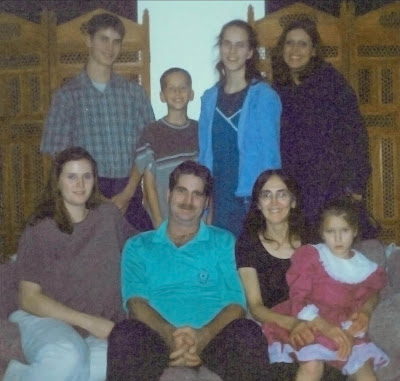 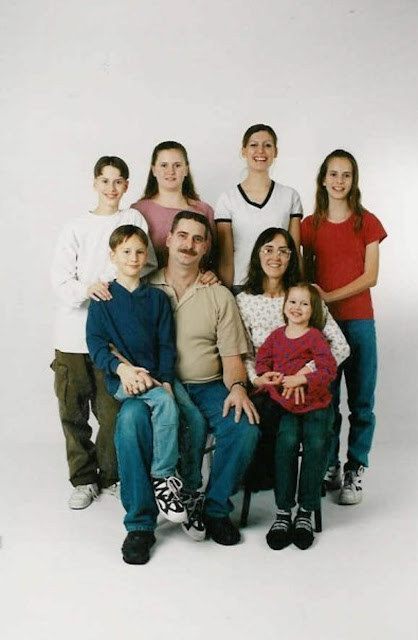 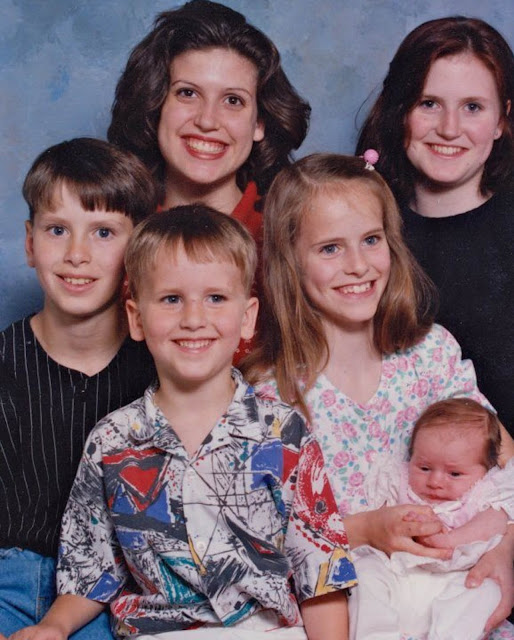 Those three pictures are, I believe, the only pictures we have with all six kids together (and I look tragically terrible in at least 2/3 of them!). I really hope that one day we can all get together again (and when that happens we will make sure to take lots of pictures), but the logistics of it all are so difficult—getting everyone's schedules to line up is one thing (making sure everyone has passports is another).
I kind of hate that for us—that it's been so long since we've seen each other and that it will for sure be longer before we see each other in person again—but I'm glad we have each other.
Today I'm thankful for the family I grew up in—for my parents, for my siblings, and for my nieces and nephews (because I feel like I got to grow up alongside them for a few years (at least as long as I spent growing up alongside Josie)). And I'm thankful for technology that allows us to gather virtually (even if it's still difficult to get all our schedules to line up). We'll have to take a better screenshot next time:

And can I just note that this is one of the reasons family gatherings are driving me crazy right now? My family hasn't gotten together in twenty years (not for lack of trying). You'd think people could go one year without going "home" for the holidays. At least, that's what I think (obviously).

It's also the reason I get so infuriated every time I get an email about yet another Relief Society activity. Somehow our ward has managed to have at least one activity a month for the last six months or so, which would be cool under ordinary circumstances. Goodness knows I could have used such opportunities to get to know the sisters in our ward prior to the pandemic. But the thing is, before the pandemic we had one (1) Relief Society activity in our old ward before the ward split (so like the week we moved here) and then we had one (1) Relief Society activity in December of last year (the Relief Society Christmas party). And that's it. Those are all the activities we had.
But cue the pandemic and all of a sudden it's like, "We need to see each other!" so they meet in parks to circle around and talk. They meet at the church for ice cream and games. So many simply, easy to execute activities! Every month they have one!
And I don't go because...I just can't. Because this pandemic response is driving me insane.
So I feel like I've been "isolating" from Relief Society since we moved here, basically. Because we were in a new ward with a new Relief Society presidency and they were so worried about getting things "right" that they just put off having any activities at all until Christmas. And then they had one planned for January, but cancelled it due to "inclement weather" (rain, even though the storm never came), and then they were going to do it in March but put it off because we were switching stakes and we were asked to wait until we "saw what changes were coming." And then COVID hit. So they just cancelled it altogether, which I fully supported.
And they were good all through April, they tested the waters in May, and then in June they just...jumped into social hyperdrive...a response I simply can't get behind right now.

Would a few months of actual isolation be that bad? My family up in Canada is talking about their COVID "restrictions" and I want them so bad (essential travel only, only household groups together, schools that had been open are closing again, universities were all online...). I just want to see a little bit of sanity. Instead I just get...what we've got—270,000+ deaths.
So I will get to know people here eventually.

I'm used to waiting for eventually to come.
People are worth waiting for.
Posted by Nancy at 12:15 AM