We're two years on this side of things now.

The good news is that grieving gets easier. We feel better today than we did last year, and last year we felt much better than we did two years ago. Though I imagine we will still have hard days—or at least hard moments—ahead, I hope this trend will continue.

The bad news is that I am not entirely sure grieving gets easier. I've said many goodbyes in my life. Saying goodbye to Karen was probably the hardest one...and I'm afraid I have other hard goodbyes down the road. I don't want them, but they're coming for me just the same. I wish experience could make that grief easier, but I don't think it will.

Except that I'll know that it won't last forever—that feeling of being suspended in time while the world somehow carries on without you? It doesn't last forever. Maybe knowing that will make it easier. Knowing that losing someone is a shock to the system, but that—with enough time, with enough gentleness—it will get easier. It will become normal, live-with-able.

For this little one, Karen's death was an earth-rocking event: 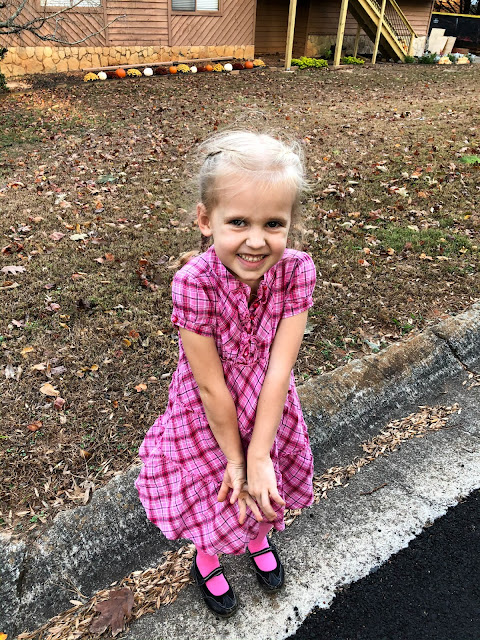 She insisted that I take her picture here today. We went on a walk down a street that we don't often walk down (because we always stick to walking around the block) and it was a delightful change of scenery (which just goes to show how hard-pressed we are for a change of scenery, I guess). The cockatoo lady came out to show us her bird again (she remembered us and said she'd been waiting for us (we probably should not have made her wait so long)). The children enjoyed looking at the beautiful fall decor. We saw several deer, a twice-blooming cherry tree in full bloom, beautiful fall leaves, and so many Biden/Harris signs.
Zoë said, "Mom, I know just the place for you to take my picture!"
"Where?" I asked.
"Right here," she said. "By these pumpkins."
"Well, I don't know that we're going to take family pictures in some person's yard. That would be weird."
We'd been talking about needing a new family picture, you see.
"No," she said. "Like I know the perfect place for you to take my picture right now!"
So I took her picture and then she said, "Can I see it?" and when I showed it to her she said, "That's good. You can see the pumpkins and you can see me and it all looks so good! We can go now."
She has had such an interesting couple of years, from my parenting perspective. I didn't lose any grandparents until I was fifteen. And I wasn't as close to my grandparents as she was to Karen. So I don't really know what it felt like for her to have Karen ripped out of her life like that, but I can tell you it hasn't been easy.
Just the other night at dinner we were discussing COVID and how glad we are to finally be seeing a task for assembled, that perhaps we'll see some action taken.
"Why is COVID bad again?" Zoë asked. "Is it because people are dying? Because dying isn't always sad, you know. Sometimes dying is exciting! Like, I want to die when I grow up! Then I can see Grandma and everyone else who I'll be missing—because you're all going to die, too. Or at least, I hope you do! When you're dead you don't miss anybody."
It's always a little jarring to hear your five-year-old make speeches like that, but honestly she's in better emotional shape now than she was earlier in this grieving process...so we'll just keep working through things.
Last year we got doughnuts in commemoration of this day, since Grandpa took us all out to Cowboy Donuts the morning of Karen's death. This year we felt like we (a) had been stuffed full of Rachel's stress-baking, (b) had doughnuts for breakfast one day during the power outage, and (c) were caught a little off-guard because this second anniversary wasn't as much on our radar as that first anniversary. After surviving that first year I guess we figured we could make it through anything.
So instead we settled in for a game of Mexican Train after dinner, one of Grandma's favourite games. We had fun and chatted about memories of Grandma and Mexican Train. 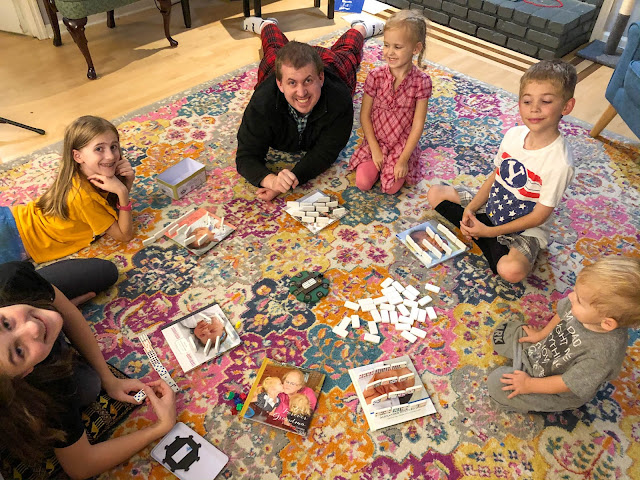 Rachel and Miriam talked about the trip they took down to Las Vegas with Grandma and Grandpa. They stopped by the Hoover Dam, they visited the M&Ms Store. They ate at "fancy" restaurants and ordered too much dessert (lava cake, in Rachel's case), which they took back to the hotel room to eat while playing...Mexican Train! Apparently Grandma let the girls stay up playing until midnight (lucky girls)! 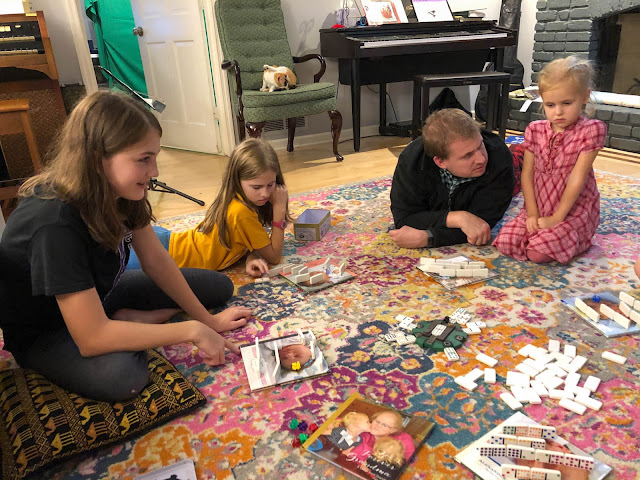 Andrew and I recalled a time we were playing games with Reid and Karen (either shortly after we got married or while we were still engaged; it was probably after we were married since our engagement didn't really leave a lot of...downtime...). Between rounds of Mexican Train we were all shuffling the tiles on the table when Karen daintily excused herself and walked out of the room. The rest of us kept shuffling and then decided the tiles were probably sufficiently shuffled...so stopped. Karen had chosen that exact moment to let one rip in the other room!
She had gotten up, walked to the fridge to get some water, and then saw some mail on the mantle that she'd hadn't noticed before, so she walked over to look at it when she felt the urge to pass gas. She figured any noise would be covered up by the shuffling of the tiles...just as we stopped shuffling the tiles.
We were all dying with laughter (because we're mature about bodily functions, obviously).
It was only funny, really, because our relationship was so new and that particular barrier hadn't been broken yet. It was also funny just because it was. 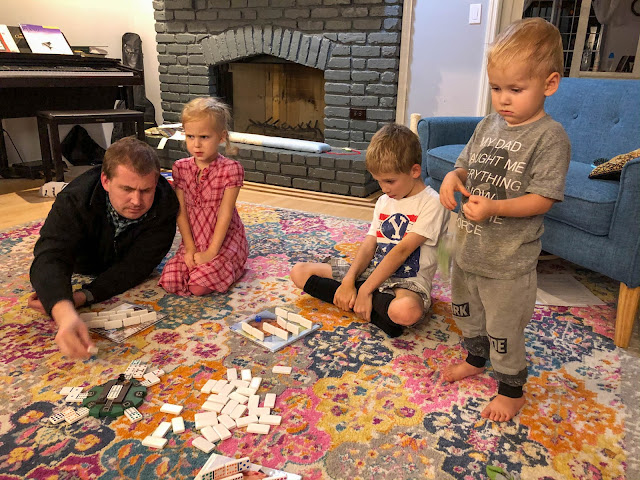 It was good to just talk, play and laugh together on the anniversary of a day that seemed unbearable, to fill the day with good, happy memories of Grandma. 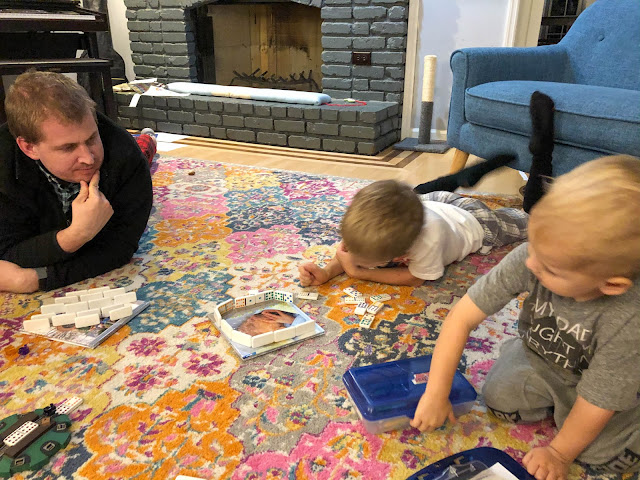 Alexander and Zoë got bored with the game and decided to everyone else playing the game instead. Those two draw all the time. Zoë started by drawing a domino on her page: 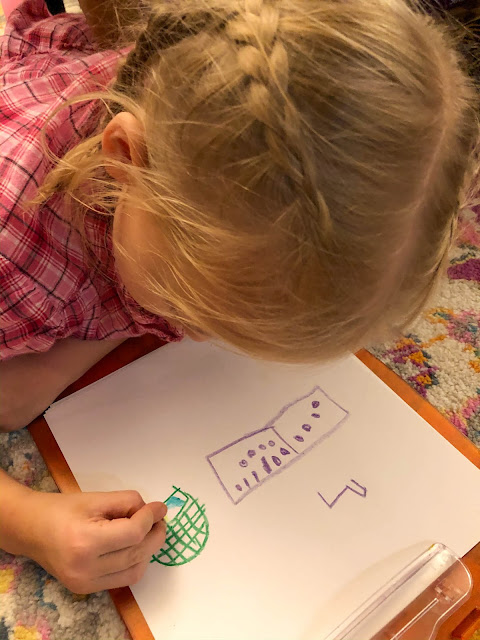 So Alexander drew a domino as well: 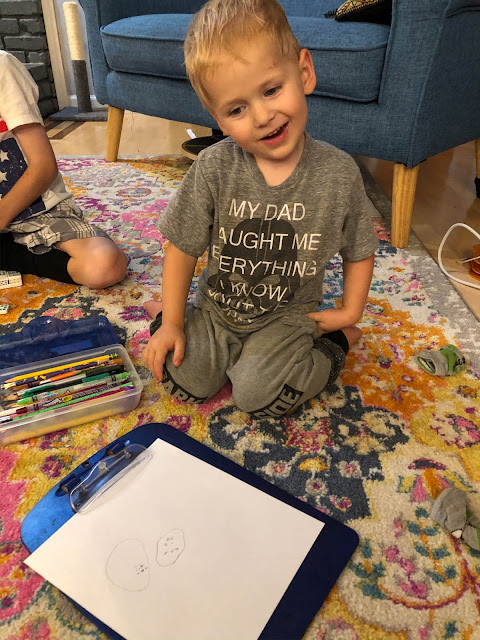 Here's everyone after the second round of Mexican Train, which Daddy won (he won both rounds, thoroughly debunking the myth that I "win everything"): 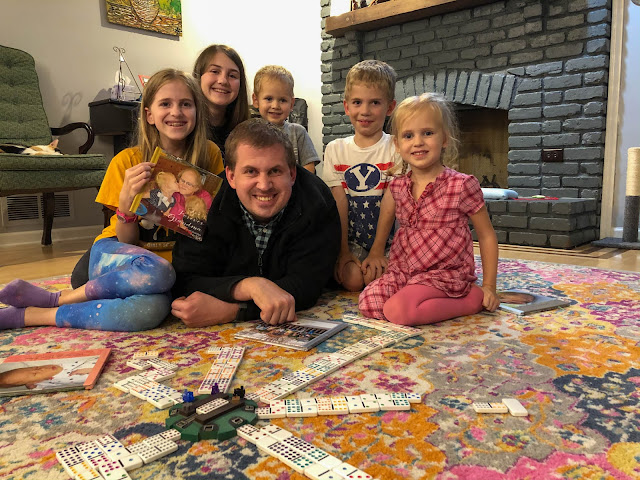 And here is Zoë's almost-final picture of our Mexican Train game: 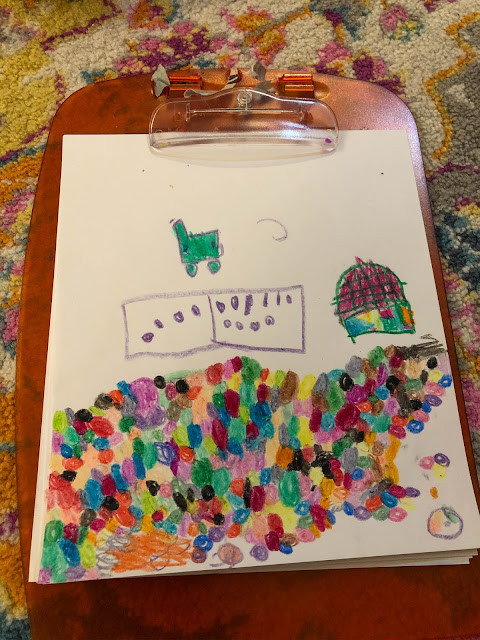 She's got a domino with a train, a box of crayons, and...a very colourful area rug (I'm a fan). Who knows what we'll wind up doing next year? Andrew and I briefly discussed staying true to the doughnut tradition, but in the end decided we didn't want to run out for doughnuts and that we could do many things to honour her memory. The kids asked about doughnuts when they realized what day it was (while we were out on our walk), but I easily persuaded them that because our kitchen was full of pumpkin cookies we didn't really need doughnuts. It's probably better if they have a well-rounded view of her rather than associating her with just doughnuts, anyway.