Yesterday Andrew thought it was Saturday all day, which explains the particularly lengthy break he took to play Nintendo with the kids in the middle of the day. Not that I'm complaining because he's been working insane hours this entire pandemic and if he wants to sit down and play Nintendo for two hours just before lunchtime on a Saturday Monday, who am I to intervene (especially when it's keeping all the kids entertained)?

He also suggested we do a movie night with a picnic dinner, which is typically a weekend thing.

But, I mean, we're taking this week off, anyway! It's a week-long weekend for us!

I suggested we could do a family night lesson and he was like, "We can do that on Monday," and I was like, "But..."

To add to the confusion, poor Waffelles returned home from the vet completely strung out. We tried keeping her in the laundry room but she was so intent on exploring and getting out of there that I was afraid she was going to hurt herself (she kept getting into the utility sink, on top of the washing machine, she even tangled/strangled herself in the blinds!!) so we moved her to the basement, which is kind of her terf. We did our best to make it a good place to convalesce and she is getting a lot more chill now that she's fully lucid and somewhat aware of the pain she's in.

She was such a handful last night though!

Anyway, Alexander fell asleep watching Newsies and instead of waking him up to get him ready for bed Andrew just tucked him immediately into bed, so when we gathered the kids for scriptures and prayer things were eerily calm.

All the children sat quietly with their scriptures open on their laps. They all followed along and took their turns; no need to prompt anyone or help anyone sound words out. No one was trying to force me to play "ride a little pony" or jumping a toy pig all around while saying, "oint, oint, oint, oint!"

It was such a quiet and pleasant moment and I honestly can't remember the last time we had one of those. And, for the first time in my motherhood, I thought to myself, "Maybe having the kids grow up isn't so bad, after all." I mean, I mostly think it's kind of a bummer that babies turn into children and children turn into grown ups (because I really love babies), but I suppose there are some perks to having children grow up as well.

Mostly I'm grateful I get to enjoy them.

Today we took a longish walk to our closest park and then, because there were already children playing there, we played in the back end of the parking lot instead. The kids didn't even complain (too much) about not being able to use the park and played all sorts of tag games while I read some of the book I'm on. Here they are taking a break from tag: 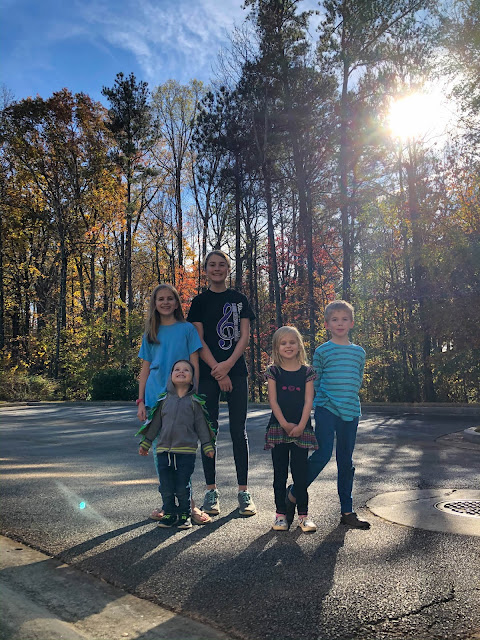 And here they all are being very concerned that the wind was flipping the pages in my unattended book: 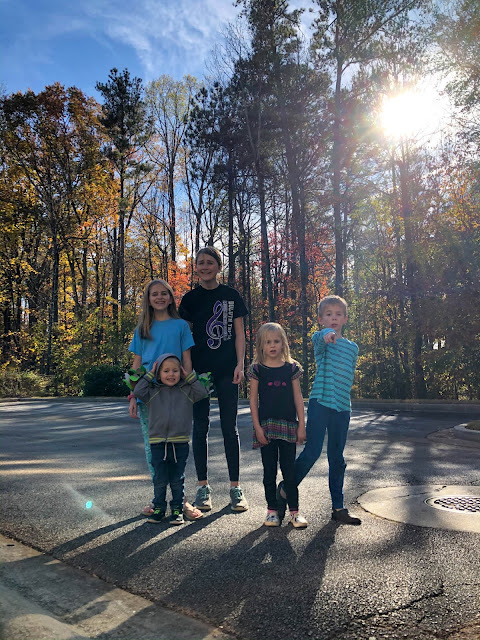 Fortunately I knew what page I was on so it wasn't too big of a deal.
The other kids left the playground eventually, so we took over playing there: 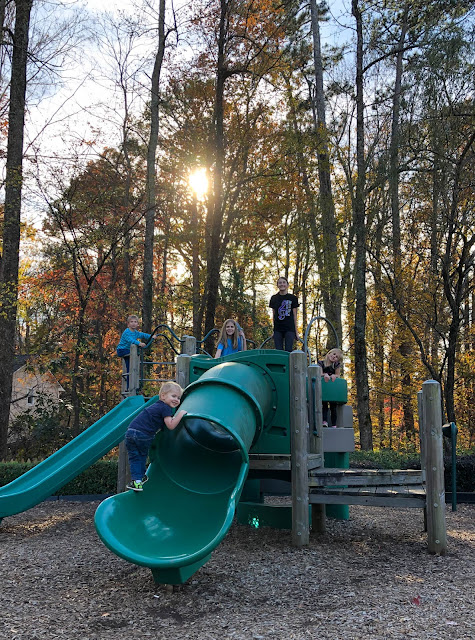 I'm so grateful for my wonderful kids and how patient and they've been through this whole pandemic, really leaning into each other to be each other's friends. I know this pandemic has been difficult, I know that we're all sick of extra rules, but I really do think that years from now we'll look at this time of somewhat-forced togetherness as a positive thing.

I'm also grateful for autumn, which I think is, perhaps, my favourite season in the south. Today was a little chilly, but so many days are simply gorgeous. And there aren't very many bugs out. And we don't have to worry about snakes so much. And fall just lasts forever down here so you really get to enjoy it.

I haven't loved fall everywhere I've lived, but I do enjoy it here.