The primary hosted an Easter Egg hunt for the kids on Saturday. They had special areas cordoned off for each family group to do their hunting, so we were just all alone hunting for our eggs...but we got to look at some of our friends, so that was nice, I guess.
Here's Zoë, wearing one of my childhood dresses: 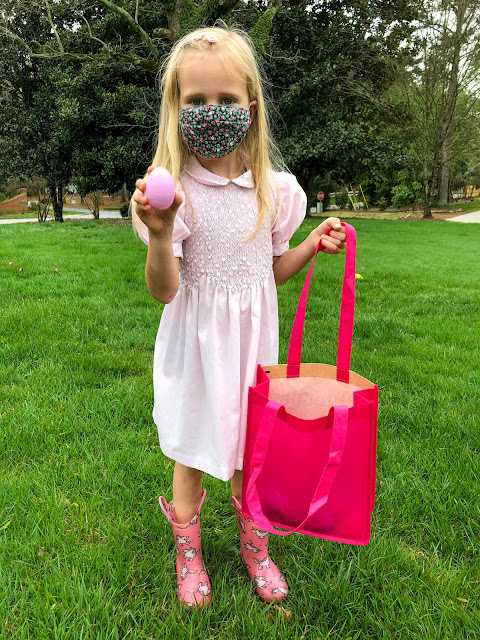 She and Alexander had both woken up at the crack of dawn to get ready for what Alexander kept calling "The Easter Egg Tradition" and what Zoë kept reminding us wasn't just any ordinary egg hunt...but an Easter egg hunt. Alexander put his shirt on completely inside out (so I helped him fix it when I was ready to get up) and Zoë picked out a black lace dress (which her sisters didn't think was appropriate for an egg hunt, so convinced her to change into this pink, springy dress).
They're all in boots because we had a lot of rain on Thursday and Friday and things were still pretty soggy on Saturday morning. 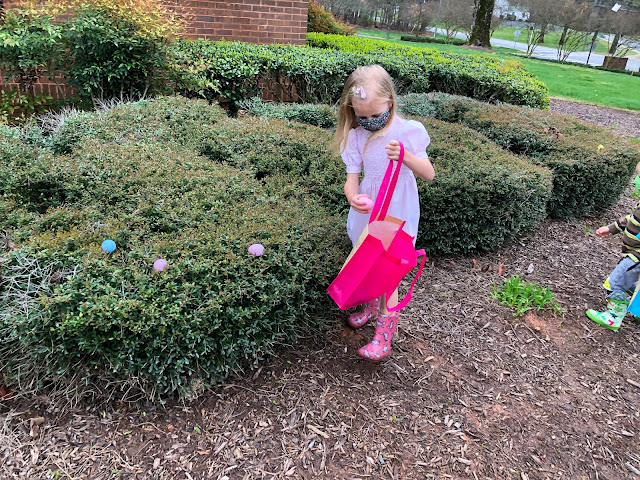 Here's Alexander looking for eggs with the help of Miriam: 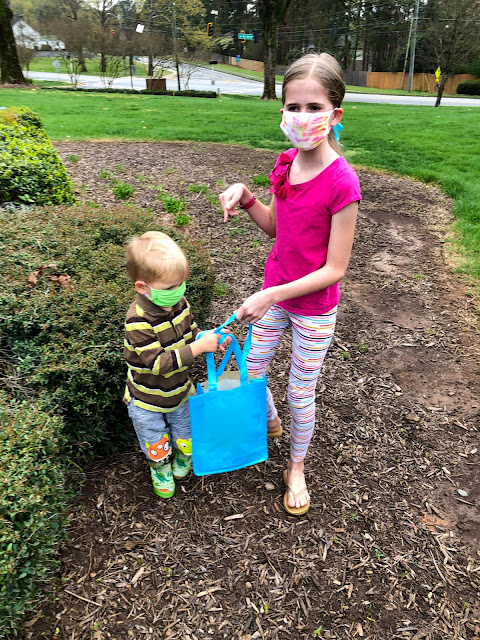 And here's Benjamin rushing around to gather some eggs as well: 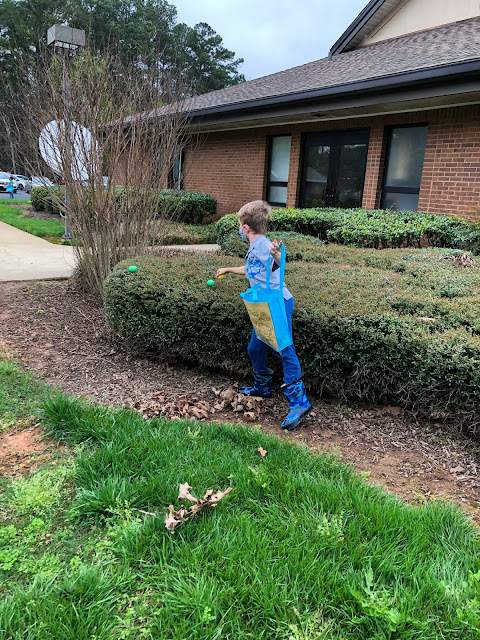 The kids were rather excited to get home so they could explore what was inside their eggs (little trinkets...so now my house is full of a billion tiny Easter trinkets). The real prize, if you ask Benjamin, are the eggs themselves. He's been using them to create mosaic pictures on his bedroom carpet all weekend. 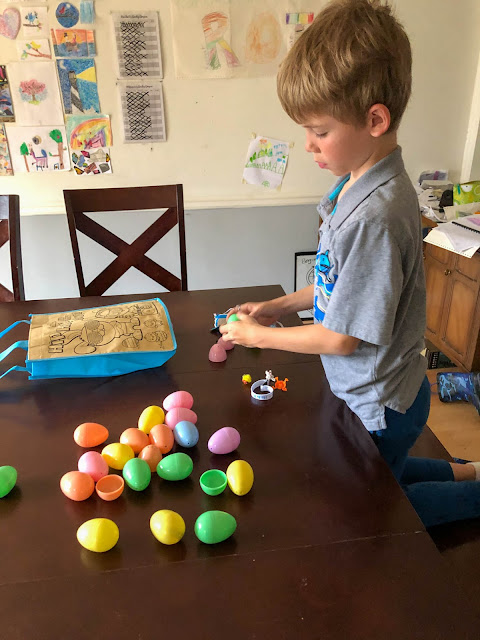 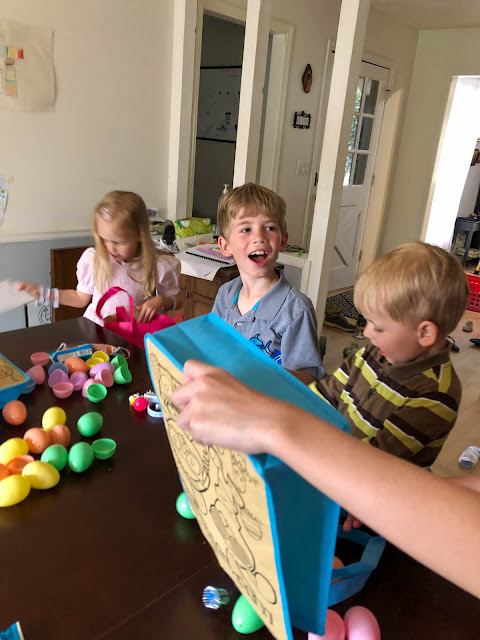 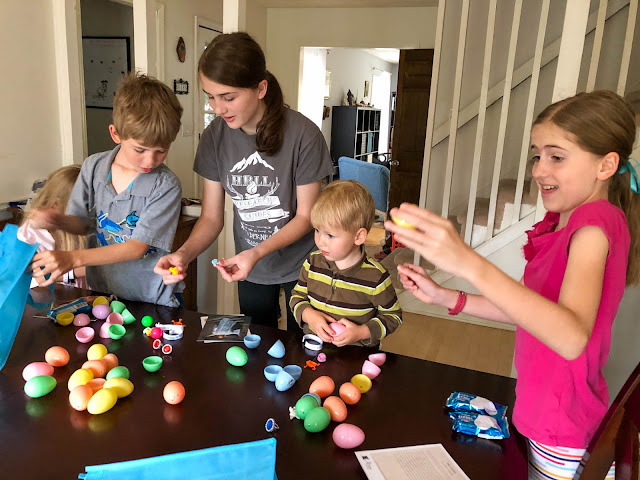 Inside some of the eggs were these cute little rabbit erasers that, unfortunately, have very flimsy ears. I was a little appalled when I came across this scene of bunny carnage because although I have absolutely no emotional attachment to these bunnies I just...hate things getting broken. 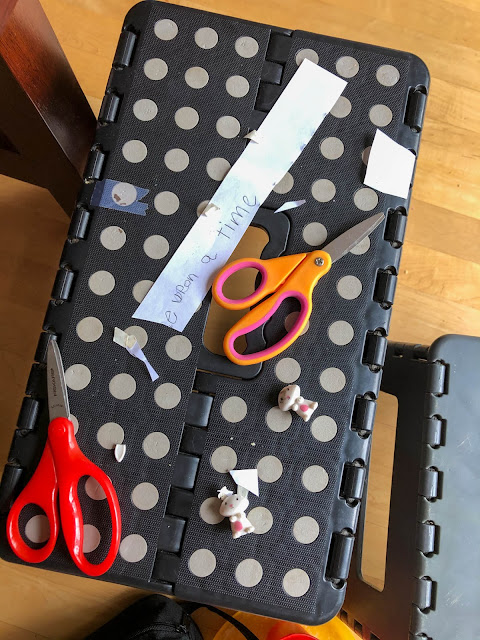 "Who cut these poor little bunnies' ears off?!" I asked.
"I didn't cut them off!" Alexander answered, padding in from the other room. "They falled-ed off, so I fixed-ed them!"
And indeed he had. 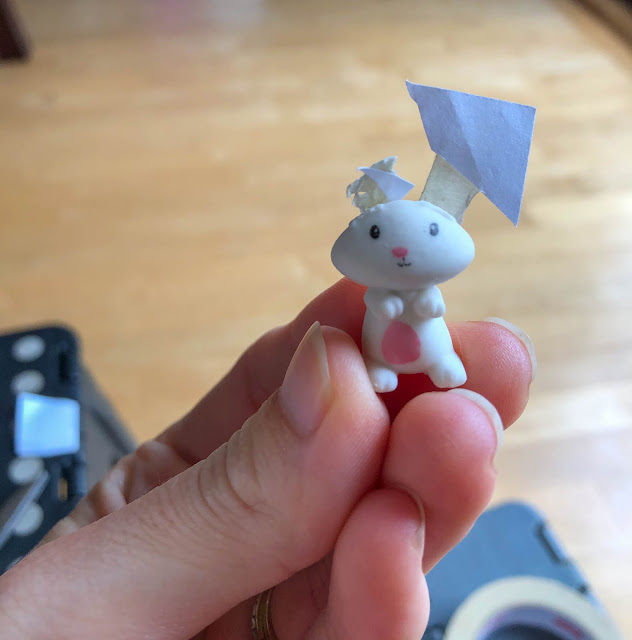 He'd cut out sweet little triangles of white paper and taped them to the tiny bunny heads with the utmost of care. Now his bunnies were as good as new!
Later in the afternoon we got to "attend" my cousin Elizabeth's daughter Bridget's baptism in Idaho. It was lovely to get to "see" Elizabeth's sweet family. My mom gave one of the talks (a pre-recorded message she'd sent to Bridget back in October when Bridget's baptism was originally planned for), which was very nice (though it's a good thing we were on mute because when Naanii came on the screen, Alexander naturally thought she was there to speak directly to him and started yammering to her). When all was said and done, someone pointed out that Bridget was wearing a dress that her mom wore to her baptism. And then Zoë wanted to tell Bridget that she was wearing her mom's dress that day as well (they both just look terribly shy in this shot and that's because they were both acting terribly shy, but I think that deep down inside they really did think it was neat that they were both wearing their mothers' dresses that day):