Rachel and Miriam had a family history fireside this evening, after spending the last little while preparing for it. I think, in non-COVID times, that this activity would have played out a little differently than it did and would have ended up being more like a family history conference for the kids. But these are (still) COVID times so it was a virtual activity.

The girls were assigned to be prepared ready to discuss one of their ancestors in a small group meeting, so we spent some time helping them decide who to speak about. Rachel ended up choosing Louisa Walker, who my mom mentioned was an interesting ancestor last week when we were talking to her (or the week before that?). I highlighted her in an FHE lesson on Monday because her life kind of went along with the lesson in the Come Follow Me manual (she was part of the original Relief Society, joining when it was about three months old).

Miriam chose to talk about Minnie Berschonsky, Grandma Pat's grandmother. When we were naming Miriam, Andrew didn't realize that his great-grandmother's name was Miriam because he'd always just known her as Minnie. So that was kind of funny to find out! Grandma Pat emailed me a little story about Minnie Berschonsky a few years ago, so I dug that email out for Miriam to read.

The girls were also asked to find a cemetery and take photos for the Billion Graves website, so we went on a little family outing this morning to do so. It was actually quite a lovely way to pass the morning so I think we might try it again sometime! 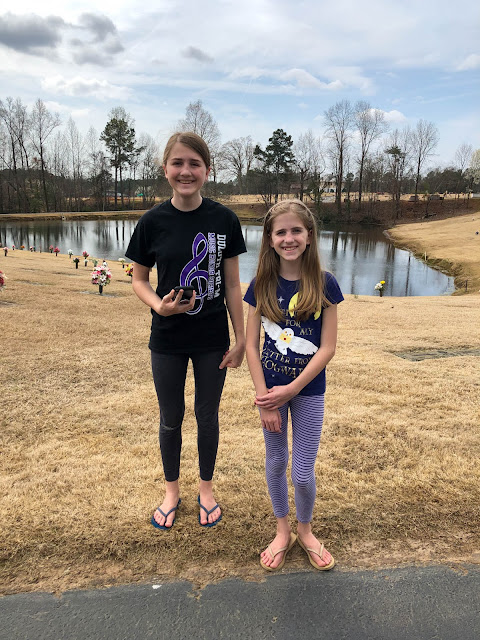 Miriam's phone died soon after we got there so she didn't take many pictures, but Rachel took a little over 100, I took 153, and Andrew took an impressive 488! He was really cruising! Of course, I was dealing with scraped knees and whiny babies and all the "lookit this, lookit that" going on, while Andrew was just plowing through the rows snapping pictures.

We did all those green dots in the righthand corner: 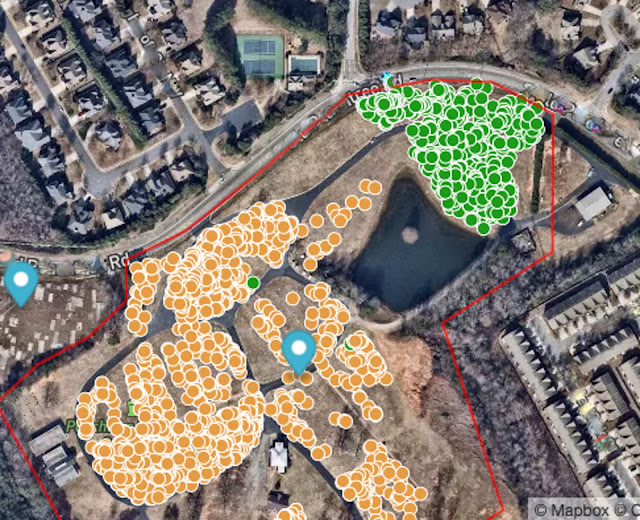 Alexander spent the whole time complaining. "Can we go home now? Can I sit in the car? I'm so cold! I need to sit in the car! Oh, you're right. It's not cold. It's warm. Too warm. I'm so hot! I need to sit in the car! I'm cold and I'm hot. I just want to go home. Can we please go home now?" But guess what his said was his favourite part of the day when it came time to discuss such things at dinner? Visiting the graveyard.
Here he is with a little bouquet he felt he needed to carry around. I am not sure where he found these weeds growing, but at least they were only weeds and not, like, purposeful landscaping. 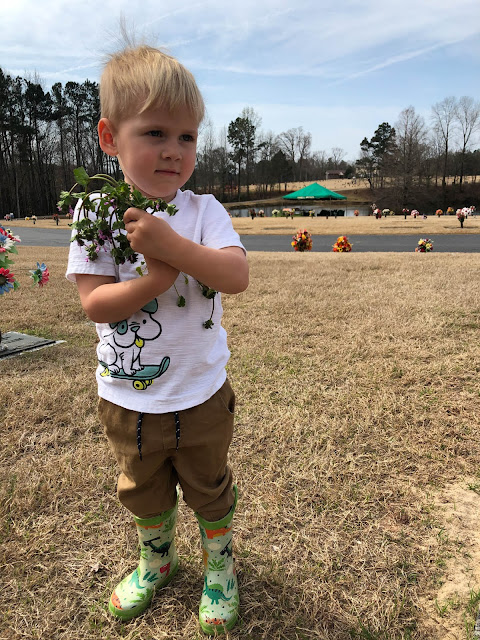 He and Zoë were particularly concerned about all the ground bees. I'm not sure what kind they were but they were swarming all over. Some sort of bitty digger bee. Alexander kept screeching about how "frightened" he was: "I am frightened!" but the bees were perfectly harmless. After realizing they weren't aggressive at all we just went about our work; I looked them up later and although I wasn't able to determine the exact species, it seems that this sort of bee is generally completely harmless. They are solitary bees and, like carpenter bees (though much smaller) the males aren't equipped with a stinger and males were mostly what we were seeing, swarming around the nests of potential mates.
The females, you see, dig a tunnel and make little chambers to hold all her little bee babies and the males court the females and then "guard" the nest (though their guarding is all bark and no bite). The females have stingers but aren't aggressive either (and are rarely even seen). While they are considered solitary bees (they don't live in an established hive community), they will often nest together in droves, with each little bee queen making her own little tunnel. So the hillside was polka-dotted with little bee volcanoes.
It was fine though. No one got stung (because...no stingers).
Zoë fell and scraped her knee exactly where she fell and scraped her knee the other day, so while it wasn't a terrific fall, it did peel her scab off, so there was weeping and wailing and blood. Fortunately I came equipped with bandaids. I've learned that I need to have those on hand with Zoë, who said she's afraid "the world is bullying [her]." She's been particularly clumsy lately, so I suspect a growth spurt. But it could be, perhaps, that gravity has simply been giving her a hard time.
Benjamin was excited to find a corps in the graveyard. He wasn't sure what was under all the other tombstones, but under this one there was for sure a corps. And so we explained to him the difference between "corpse," as in a dead body and "corps," as in a division of the military. I could not tell him what all the military abbreviations on the headstones meant, but when we got home he watched while I transcribed some of the headstones where we learned all sorts of new things (on Billion Graves when you type in the abbreviation, it automatically translates into whatever the abbreviation is standing in for, which is helpful for people like me who know nothing about military service).
Anyway, we had a good time at the graveyard, which is nice because I think usually people have not good times at graveyards.
This evening the girls had their fireside. Miriam played the opening hymn on the organ, which you can listen to here if you'd like. And then they had some speakers. Some youth talked about their experience taking pictures in various cemeteries. Their leaders distributed a family history booklet for the kids to work on, along with some cookies to have for a refreshment during the fireside. They broke into small groups to discuss the ancestors they learned about on their own. Miriam and Rachel were nervous because they didn't know anyone else in their group (it was a stake fireside, so it was the youth in our congregation plus several others in the area), but because they were prepared with a story they both got to present because no one else seemed to have anything prepared.
They saved their cookies to eat a little later in the evening because they were still so full from dinner (it wasn't their fault; we had crepes).
All in all, I was impressed with how well the fireside/family history weekend was planned out. Not every Zoom-based activity turns out great (I know; I'm an activity leader in primary and...yup...not every activity works as well as I'd like), but this one was really quite fun for our whole family.
Posted by Nancy at 1:11 AM