The tickle bush that ate Zoë

Zoë seems to be a little accident-prone lately so today I will share another one of her little adventures (there will be gruesome pictures after the jump). We were taking a little afternoon stroll when Zoë, who had been walking along the curb, encountered a "tickle bush." Now, tickle bushes (which are really just decorative grasses) are so named because we have a longstanding tradition of wheeling the stroller next to them in the summer when they're lush and billowy. In the fall and winter and early spring they're a little less lush and billowy and more dry and poky, so we tend to avoid them. 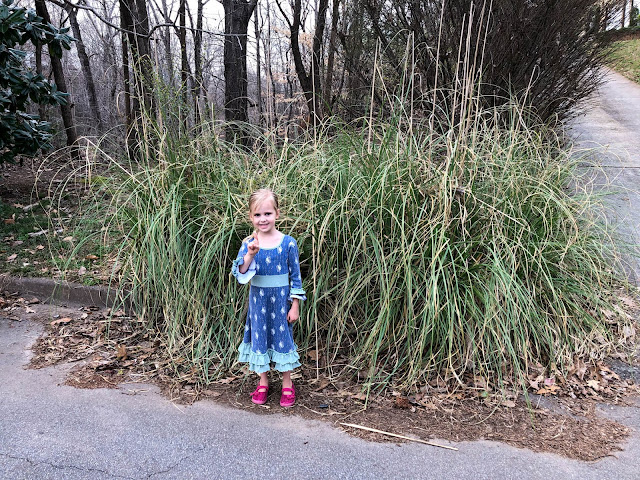 But Zoë was walking along the curb and Zoë determined that she would walk through the tickle bush overgrowing the curb, rather than walking around it. Well, the tickle bush ensnared her and attempted to swallow her whole (in other words: she tripped and fell deep inside the tickle bush) so I helped heave her out and noticed that her finger was...all chewed up. Lots of blood, skin flapping around...it looked bad. But I keep a little first aid kit in our stroller, so I whipped that out and bandaged her finger up, and instructed her to give her finger a big, long hug with her other hand all the way home. 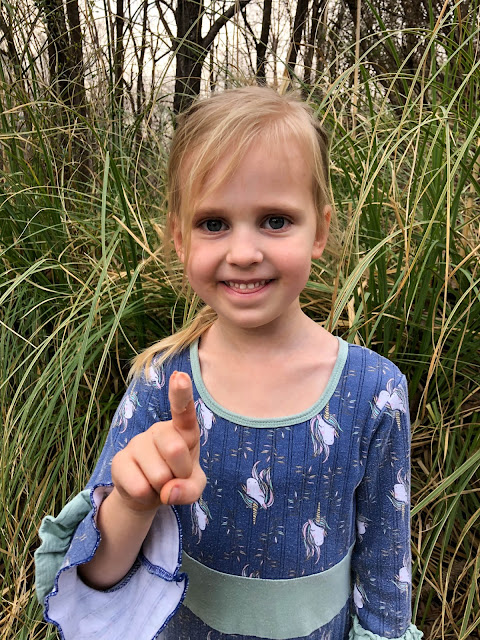 She didn't even cry!

By the time I got to her (sitting all skewampus in the bush) she was humming Vivaldi's "Spring" and she just kept humming while I fixed up her finger and then hummed most of the way home.

"Humming's just a thing I do to keep from crying sometimes," she told us when we noted how brave she was being.

We didn't take pictures right away. We were going to just finish our loop around the block, but our neighbour's big German shepherd was out in the yard and we don't like walking past when it's out unattended because...we don't...so we turned around to walk home the way we came and that's when we stopped to take a picture of Zoë with the tickle-turned-monster bush.

So, as promised, here are some yucky pictures of her finger... It had bled through the bandaid by the time we got home (you can, perhaps, tell she had blood dripping all down her finger), but it had also mostly stopped bleeding, which was good news. 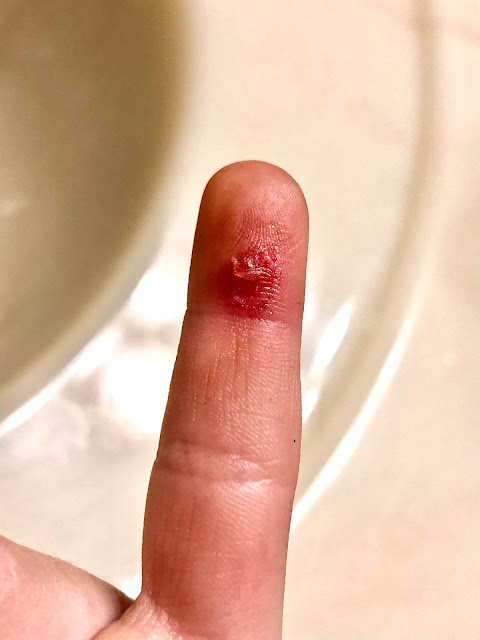 It really wasn't as bad as I thought once I had it cleaned out. It's still quite deep (that's like a triangular chunk of her finger that's torn off...so we just smashed it back into place and put a bandaid on...and we'll see how that goes...it's not really...stitch-worthy...so she'll just have to regrow that chunk of her finger, I think). 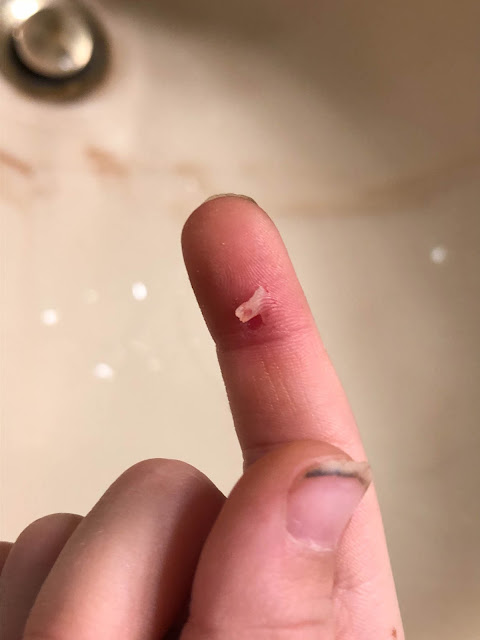 So hopefully that just heals nicely on its own. We'll keep an eye on it over the next few days.
I'm always jealous of my friends in places with good medical systems. For example, around this time last year I think is when Alexander threw a brick at Zoë's head...and also around the time he catapulted out of the stroller and landed flat on his face. All this is normal when you have a handful of small children, right? Sure. Anyway, we did take Alexander in (which cost us a pretty penny) but we didn't take Zoë in. But I did post about it on Facebook because...the two of them just looked so ridiculous. I had friends in Canada telling me that I should take her in and I was like, "She's fine. I checked her out."
And then they were like, "But how can you be sure?! There's no harm in taking her in just in case."
And I was like...well...there is though. Even with insurance, these "just in case" visits can be very expensive and so we take our bets. Thank goodness for the training in first aid that I have. Thank goodness for our doctor friends who have kindly answered questions over the years (whether I realize I'm talking to our doctor friends or not (because sometimes, believe it or not, I don't know (also, Benjamin still has a scar from falling down the stairs that day, just in case anyone's wondering))).
It seems to be a pretty common thing. Like, when I accidentally put Benjamin to bed with an untreated bee sting? I also posted about that on Facebook (because I'm a glutton for punishment, I guess) and several mothers admitted times they didn't seek medical attention when they probably should have (because getting medical attention really is kind of scary in the States sometimes). So I shared this story of when my friend Catharine put her son to bed with a tummy ache...but it turned out it was appendicitis! Obviously they ended up in the hospital with that one eventually, but equally obviously they should have ended up in the hospital sooner. But then another friend commented to stay that she did the exact same thing with one of her daughters! So I have two friends who put their kids to bed with severe tummy aches.
Mostly we talked about it being because children are prone to crying wolf about these things sometimes, which is not untrue. Kids totally do this (grown ups do, too)! Who doesn't like to milk some pain for everything it's worth every once in a while? But I think another part to this (that we didn't discuss on social media) is the fact that mothers in America are afraid to take their children to the doctor—especially without an appointment. It could wind up costing a fortune. So you just cross your fingers that the tummy ache will go away, that you can get away without getting stitches, that they will sleep off (or walk off) whatever's ailing them.
There's no nurse's hotline to call for advice because they won't give out advice over the phone in the States (at least in my experience). Even doing a virtual appointment will cost you anywhere from $15 to $50 dollars (and that's with insurance paying the rest). And...I just think we need to rethink how things are "working" for us here. I'll probably have more to say on this later...
Look! Here's Zoë walking off her finger trauma! 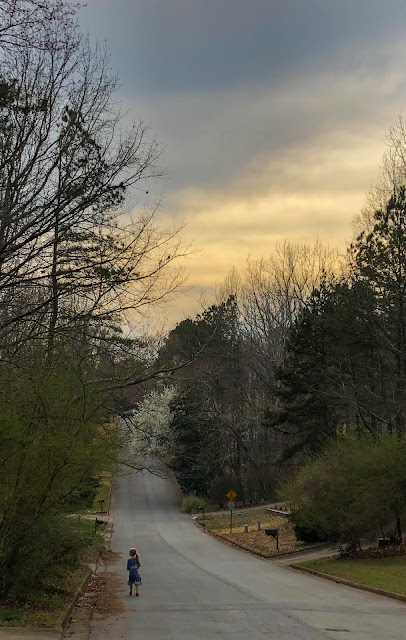