We had a rather large storm system come through yesterday, which meant that for the first time in a long time we spent most of our day inside (we've been spending a lot of time honing our bike skills recently). Here's Zoë reading to WaffELLES: 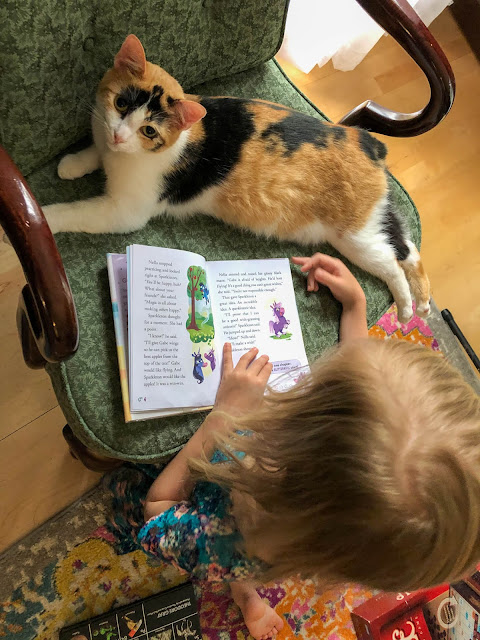 We may need her to stop reading to the cat quite so much because this cat is getting too smart for her own good. We've known she's been able to turn a light on for herself in the basement (it's a pull-string switch, which she manages to grab after climbing on top of a shelf) but most recently she's learned to open the door to her living quarters. We like to tuck her in for the night because she can be a bit of a mischief maker (see: turning on lights and opening doors) and it's not like her "quarters" are cruel—she gets half the basement, with plenty of things to climb and scratch at her leisure. But, it is void of people and she likes to be by people (not on people; just by them).

Last night we had a movie night for dinner, so we shut her in her quarters, put out a picnic blanket, and let the kids eat sitting on the floor.

WaffELLES stayed tucked away until we'd finished eating (thank goodness), but in the middle of the movie she wandered upstairs, all proud, tail swishing regally, and plopped herself down to finish watching the movie with us. She probably would have been upstairs sooner, but it takes her a while to open the door. We're not sure how she does it because no one has actually ever seen her do it, but we know it involves a lot of banging around, so I'm sure she's just jumping at the handle until she manages to jostle it just so. Replacing the door knob would probably fix this "problem" (it's old and "sticky") but...it's interesting that it's a problem in the first place! 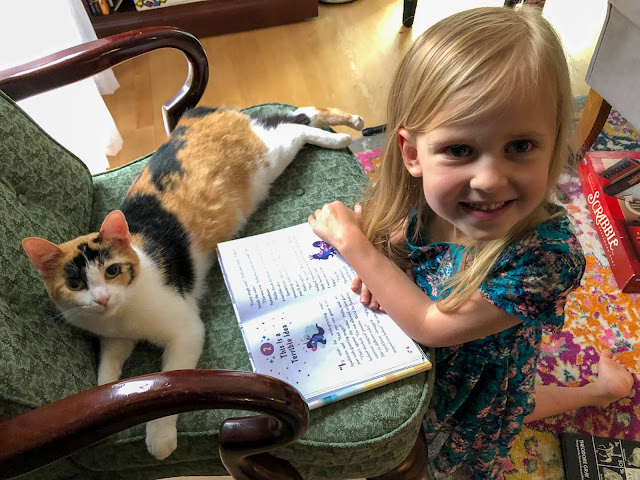 We also watched a little documentary about Shakespeare. We just finished reading Beautiful Stories from Shakespeare (retold by E. Nesbit) together on Wednesday so didn't have anything to read for Thursday. The kids seemed to enjoy it, so I might make them watch another one next week.

At one point the documentary was speculating about Shakespeare's birth date. We know he was born and baptized in April, with his baptism date noted as April 26, 1564. The documentary said it was possible he was born on April 23, 1564, which is St. George's Day (and also Shakespeare's death date). St. George is the patron saint of England, we were told, and a picture of St. George slaying a dragon was flashed on the screen. And then the show moved on to speculate about other potential birth dates.

"Then dragons ARE real!!!" she squealed.

I had to correct that fast because she's always trying to trap me into confirming outlandish ideas. The other day at dinner she piped up, quite randomly, "Did you know that it's still Medieval times?"

Everyone stared at her in confusion.

She turned to me for confirmation. "Mom?"

"You did! You said we still have kings and queens and princesses today!"

"And princesses, yes," I added. "Royalty still exists and there are still palaces and things, but...medieval times are very much over."

It's fun to watch her make sense of the world. We did manage to sneak out of the house between storm sessions for a quick walk around the block. Zoë rode her scooter. We had to stop to take pictures by these flower petals that look like snow coating the ground (at least to us here in the south; I think we can safely say that we got more flower petals than snow this year). 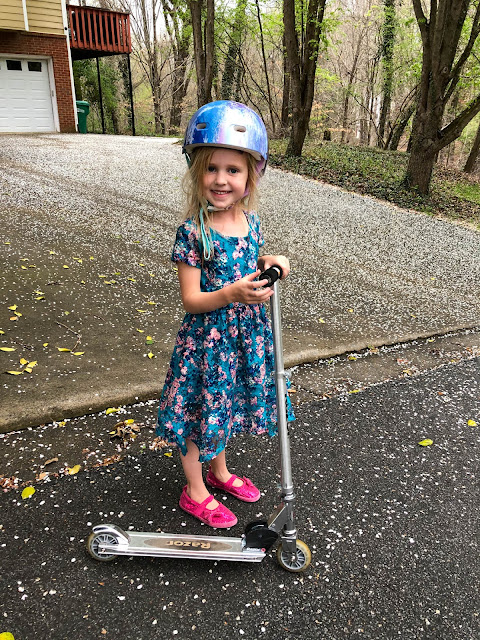 We were all quite worried about the storm early this afternoon when the sky turned a sickly-green colour. Zoë got a box of 100 felt-tipped pens (markers) for Christmas last year, all different shades, and she was holding up all sorts of colours, trying to match the sky. It was really quite eerie.
Here's Alexander trying to remember the words to express his concerns about the sky:
And here he is drawing a picture of "it tornado-ing": 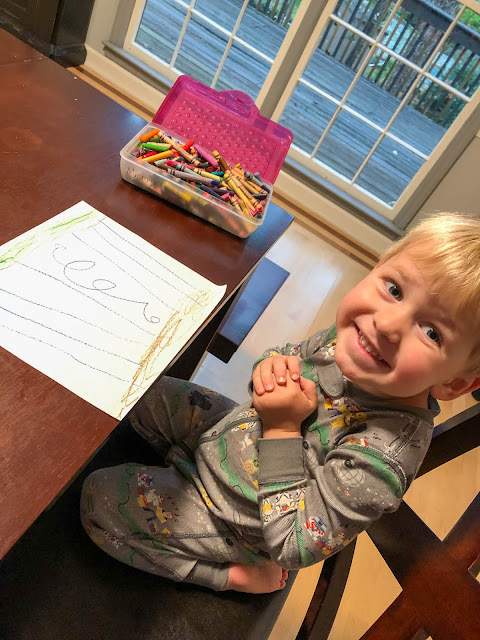 He's got a green sky with rain lashing down and a tornado right in the middle. Fortunately we didn't get a tornado here, though we did get some wild thunder and lightning (with a tornado watch until 7:00 this morning). We were lucky enough that we weren't even upgraded to a warning (so although we were ready to grab the kids and run to the basement, we...didn't have to). Newnan, Georgia, to the southwest of Atlanta (we're northeast) was not so lucky.