"You promised," he reminded me.

Why am I always promising my children things? I actually do my best to not promise things, so I think they interpret "maybe sometime" as a promise, which almost sounds like a them problem...but I digress.

My biggest worry about going to "the sand park" today was Zoë because I didn't think she could keep her injured finger sand-free and I really didn't want to be picking sand out of the depths of her finger. She assured me she would stay out of the sand pit. "I can just play at the playground," she told me. "It will be fine. 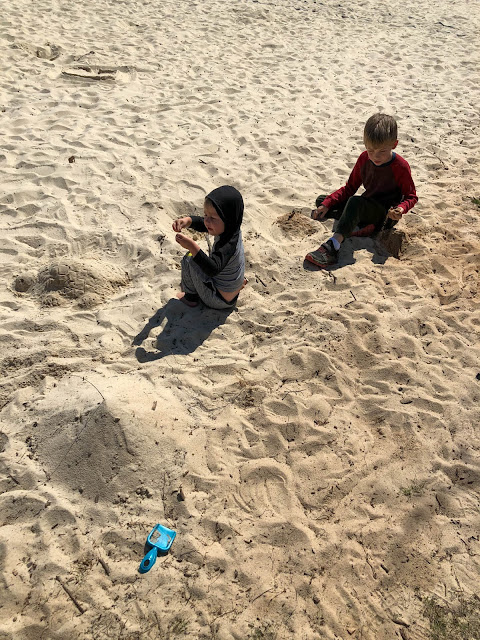 And it was fine...for a while.

When we first got to the park, we left Alexander playing in the sand while we did our reading and writing work. It actually worked out rather well without him interjecting things every few minutes. We've been reading some narrative forms of Shakespeare plays (we'll be watching some a little later and I'll have my older kids read a full play or two, but this introduction seemed adequate for now) and he's been hilarious. For example, yesterday Romeo looked up at Juliet's balcony to see her "fair face in the moonlight, framed in the blossoming creepers that grew round her window..." and Alexander gasped.

"Creepers!" he said. "That's like on Minecraft! She better get off of that balcony before it blows up!"

He's actually pretty obsessed with Minecraft. While we we walking this evening after dinner and the sun was setting, he was worrying about getting home before "monsters start spawning."

Let's just say that our reading and writing went a little quicker without his constant interruptions.

After reading and writing I turned the kids loose to play for a while. Benjamin joined Alexander in the sandbox and then Zoë did, too. First she was "just walking around, not even touching the sand." Then she was digging with her good hand. And before I knew it she was doggy-shoveling sand between her legs.

Fortunately her bandaid held firm against the sand, but it was covered in sand so I carefully peeled it off and put a new one on her and this time she remembered to stay out of the sandbox...perhaps because she got a good look at her finger and remembered how mangled it is. My question about her finger is...how is it not hurting her? Like...she doesn't seem to be experiencing pain, which is nice because being in pain isn't fun. But also...being in pain reminds your body to take it easy. She's perfectly happy to practice the piano or dangle from the monkey bars or dig in the sandbox. Why doesn't this injury hurt her more? (Again...not that I want her to be in pain. I just want her finger to heal nicely and think if she babied it a little it might heal a little faster. But what do I know?)

Here you can see her saying in the playground area of the park (in the background of this picture of Alexander): 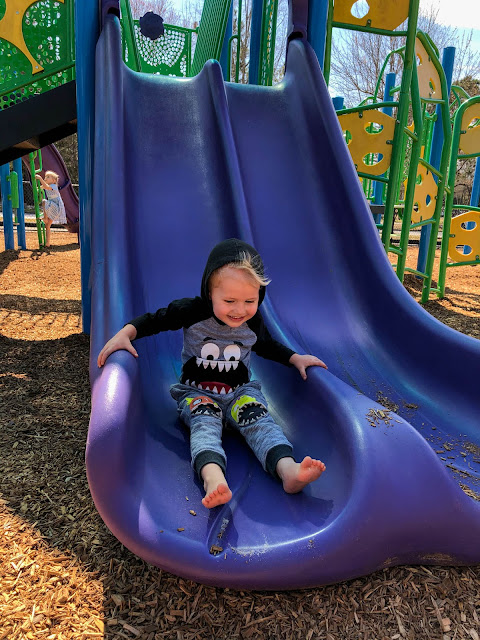 He was really loving the slide. Also, yes...he's dressed from head to toe in monster clothes. He loves monsters and thinks they're hilarious (until it gets dark...because then he worries that monsters will "spawn" and really come to visit him, which he doesn't want). 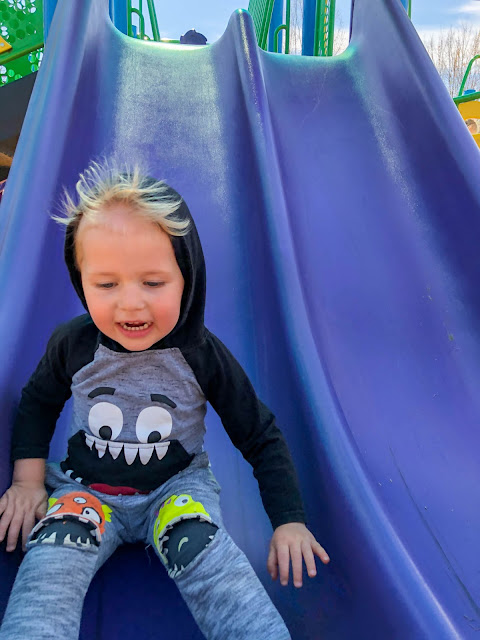 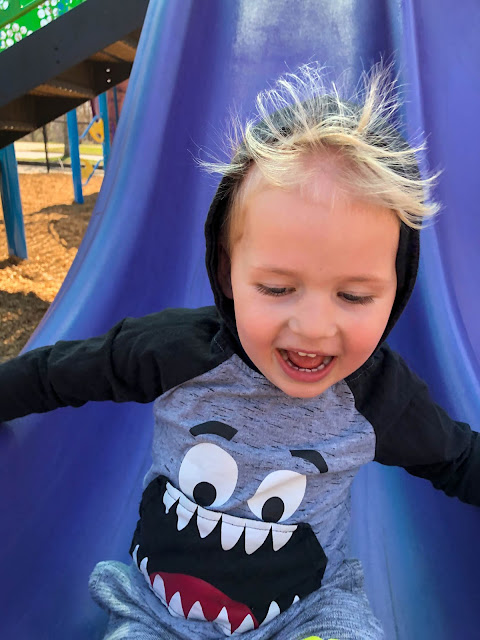 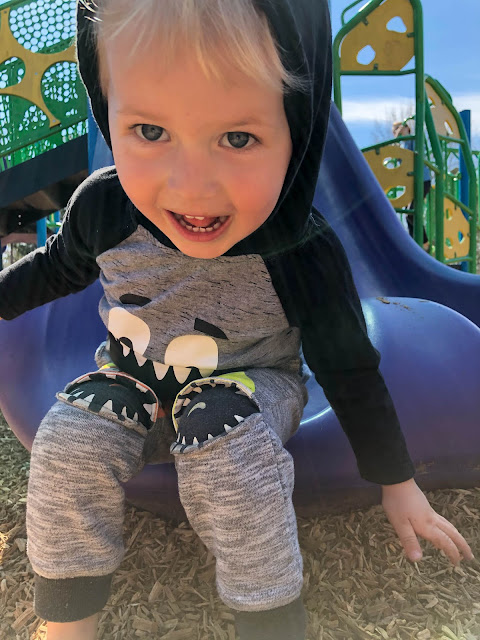 I let the kids play (variations of tag and grounders interspersed with sand castle building) until they started arguing about whose turn it really was to be "it," and then I announced it was time for math. Benjamin breezed through his math, getting every single question wrong and leaving me this charming note in place of an answer for the last question, which he didn't really attempt: 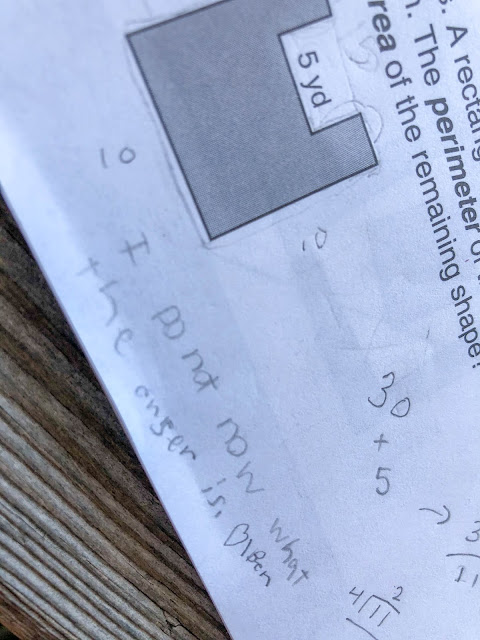 And then he hopped on his scooter and rode around until I called him back and asked him to turn on his brain. Once he committed to sitting down and actually thinking about his problems he was able to identify and fix all of his mistakes and answer the last question.

I worry a little bit about his penmanship and seeming inability to do anything on paper. Orally, he does very well. He can discuss ideas. He can spell words. He can do mental math. Give him a pencil and paper and...it all comes out as mush.

I'm beginning to suspect he has a bit of dysgraphia because he has been different from the other kids in that he was not remotely interested in the alphabet or writing as a toddler and did not (and does not) really care for drawing or colouring. He also pretty much has every symptom listed on WebMD (for dysgraphia, I mean, not for everything described on that website). So I think that will change how I approach him about his writing.

Am I a little late to pick up on this? Probably. I've been hoping that daily writing would help him figure things out, but his writing simply hasn't improved at all and has always been a constant battle.

So, I think I'm going to do "check myself" before I say anything about his work being sloppy (or that he's being lazy) because I'm definitely guilty of doing those things. I think I'll end copy work for him (because it always ends abominably—like he can't copy things out neatly; he just can't) and instead I'll have him work on other fine motor tasks (like, this one mom mentioned she serves her son macaroni and cheese and makes him eat it with a toothpick, which he thinks is fun, but which helps him develop those small movements necessary for writing; another idea is moving beans with chopsticks (we have chopstick "holders" so we can start out with those and eventually graduate to real chopsticks)).

And I'll just have to figure out how to assess his learning without making him write about everything all the time (our homeschool tends to be a little heavy on the writing). He's been wanting to learn how to type (and has been doing lessons online), but maybe we'll focus more on that and look into getting a laptop for him.

Writing is important...but also...I mean...Zoë has passed him up in the handwriting department...so...

Anyway, Miriam was doing percentages of things and needed help with her work and Zoë was working beside me and Rachel was trying to figure out radicals, so Benjamin just tucked into his math and did it all wrong and who can blame him because...scooter. I'm just glad he's so willing to redo things.

Once the kids all finished their math (except for Rachel, who signed up for some "office hours" with Andrew to work out those radicals (because there's only so much I can do)), the younger three rode their scooters around and around while the older girls and I walked around the little lake.

Alexander really wasn't moving fast (in fact, he was going slower than a comfortable walking pace (Benjamin lapped us 4+ times and Zoë lapped us a couple of times, herself)), but he was working hard. He was so hot and sweaty by the time we got back to the car. The day completely wore him out!

Here he is standing in the garage, still hot and sweaty, after I got him out of his car seat. He sighed heavily as he looked outside at the blazing sun (it was like 23°C/73°F today, which I thought was lovely, but I wasn't decked out in monster sweats). 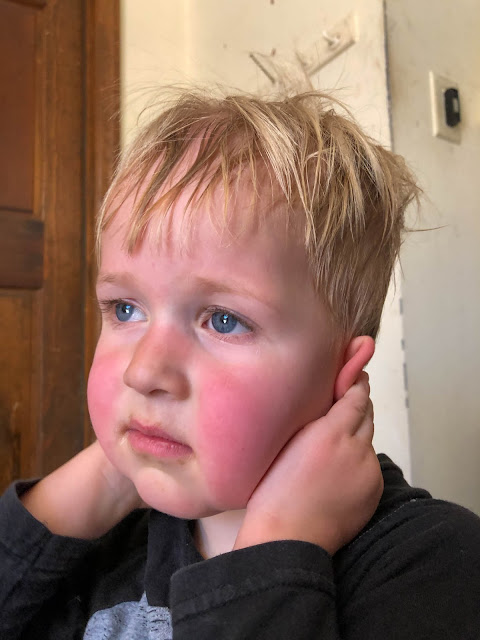 "What's wrong, buddy?" I asked.
"I just want to know what then pool is gonna open," he sighed again.
He loves the pool. I told him it would open in May, so that's really soon. The pool really makes summer tolerable.
His cheeks are very red, I know. I had the air conditioning on in the car and he had cool water to drink so I'm not sure why he was so very red. He just had been working so hard at pushing that scooter, I guess.
And he was plum worn out the rest of the day. He grumped at everyone who tried to play with him (the kids have the train tracks out right now and Alexander wanted to be in charge of everything). We finally gave in and put on Daniel Tiger for him, just so he could zone out and stop screaming at everyone. He was still a little dazed at dinner.
He said the prayer on our meal and actually remembered to talk about the food (he always forgets that part) but then when Andrew asked him what his favourite part of the day was, Alexander answered, "Dear Heavenly Fath..."
And then he started laughing at himself. He laughed so hard he nearly fell out of his seat.
"That was funny because I started praying instead of answering your question!" he finally managed to squeak out before dissolving into giggles again.
I don't even remember what his favourite part of the day was. But I don't think it had anything to do with "the sand park." I think it was actually playing trains with me in the basement, which is funny because I was the only one brave enough to play with him and all he did was yell at me the whole time, so I eventually just got my book and read while pushing a train back and forth with one hand and then he mostly ignored me.
Overall, not a bad day. But we're definitely all worn out!
Posted by Nancy at 12:57 AM