We said goodbye to our trees today. Secretly I hope this day would never come because I love trees...but they were creating problems in our yard. We really need to put some terraces (and some drainage) in the hill in front of our house but we can't really do that with the trees there. And the trees hadn't been tended to well and were sickly (sicklier than we thought). So we said goodbye.

Here are some farewell pictures we took yesterday afternoon by the big maple tree: 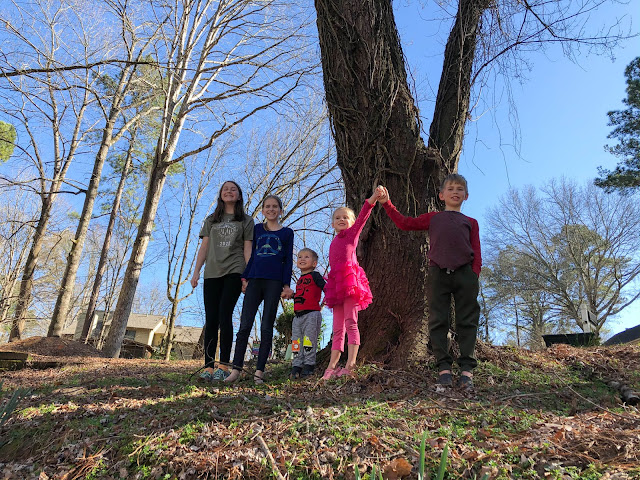 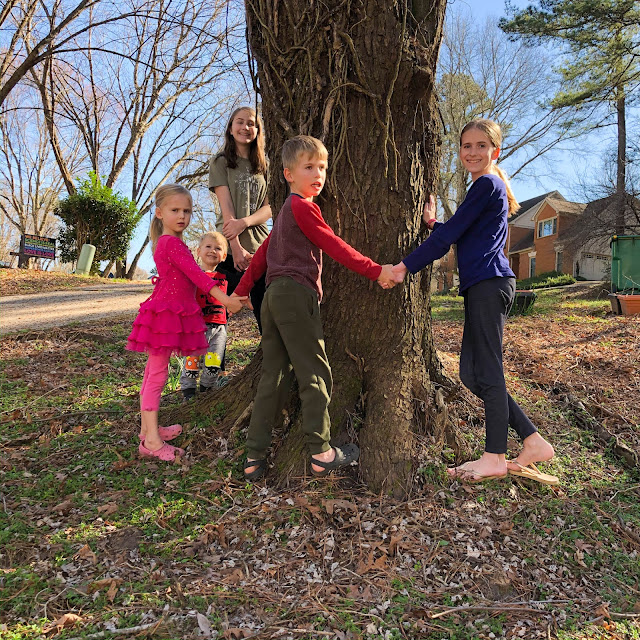 We intentionally took out the three big trees you can see in this picture: 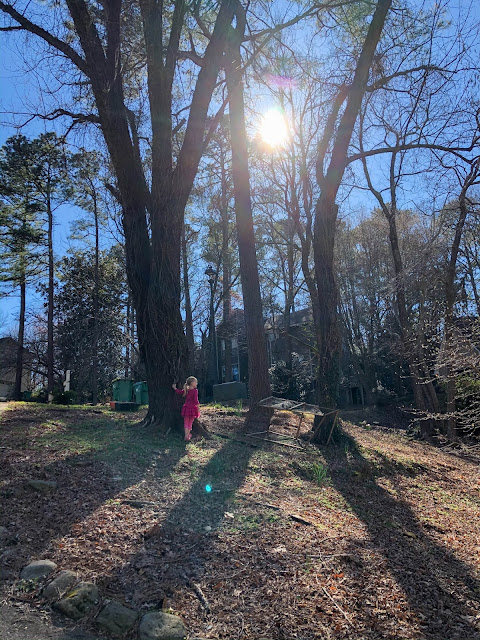 We had multiple arborists come out to "assess" the trees in our yard, but it seemed like a rather pointless exercise because one told us, "That pine tree has got to go! A big storm could knock it right out and it would land directly on your house! The maples are fine." But another one told us, "These two maple trees have got to go! They are sick and dying already. They will crash right through your roof! The pine tree is nice and healthy. It can stay."
I couldn't get any arborists to agree with any other one. I secretly think they would be willing to cut down any tree we asked them to cut down and really didn't care which trees in our yard were healthy or not.
So for a long time we just left them, but we really do need to get some better drainage happening in our yard and so to facilitate that, all three trees went to give us a nice blank slate to work with, so to speak.
It's actually kind of nice to be sitting at my desk not worrying about whether or not a tree is going to fall onto our house at any given moment (because these trees really were rather prone to dropping branches at random). We could tell one of the maples—the smaller one—was sick. It only had one or two actual branches left and was basically a trunk sticking out of the ground. The other maple we thought we could save if we trimmed back the ivy and let it breathe a bit. But...in the end we were glad to see it taken away on purpose (rather than crashing through our house and then being taken away). It wasn't in great shape either.
Anyway, here's how our day started, with the three amigos reading stories and watching the men at work: 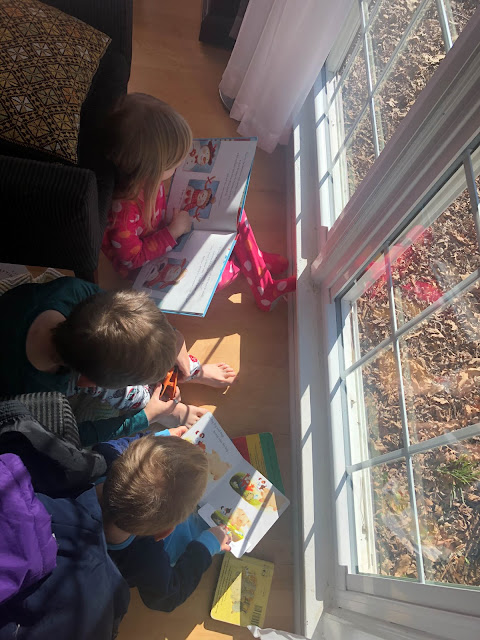 Watching the workers was fascinating and took up the bulk of our homeschooling day. We still got math done. The little kids played a ton of Prodigy while they watched the workers (and since Benjamin only has one unit left in his math curriculum, doing review for a bit is fine with me). The older girls did their assigned math work, as well as some work on their research projects for social studies. Zoë and Benjamin worked on their animal reports. For ELA we watched a lecture by Kate Messner, which was fun. She talked about her writing process—how she gets inspired to write, how she plans her writing, how much research goes into her writing, what her drafts look like, what her rewriting process is like. It was very interesting.
In the summer I participated in BYU's Books For Young Readers Conference and now UGA is having their Georgia Children’s Book Awards and Conference of Children’s Literature. One of my professors helped plan it this year and informed our class about it—along with the note that registration is free this year (probably because it's all online)—so I signed up for every session. And I figure...if the kids happen to sit in on the sessions and listen to the authors speak then...that happens.
Science was mostly answering questions about the tree removal process. Benjamin had a very good question about their use of ropes. They use the ropes to direct the trees to a good landing place so that they don't crush any nearby objects (like, for example, us). Benjamin noticed that they left the trunks of the trees for last and that they would use them as leverage as they lowered various tree parts (for example, a rope would be attached to a big ol' branch, and the man handling the rope would wrap it around the tree and hold the end). Benjamin wanted to know why so we explained that it was to give the worker some mechanical advantage. He was using the tree trunk to carry the weight of the load, essentially, leaving him to control the rope without worrying about having to lift a ginormous tree all on his own.
Here are some tree "bits" cluttering up our yard: 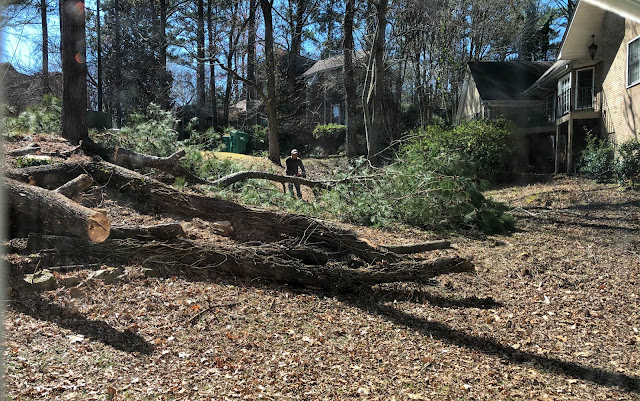 We've had a lot of neighbours take trees out the past year or so and I have to say, our crew was exceptionally efficient. Honestly, our next door neighbours took out about three trees a few months ago and it felt like the tree removal place had equipment parked on our street for a week. They had that chipper going nonstop. It was so loud for forever.
Our team was in and out in a day. The chipped a minimal amount of tree debris and salvaged the rest in log form. My guess is that they sell it to offset some of their costs (our team also had the best quote out of all the arborists we spoke to). Here they are collecting some of the logs with a bobcat (Alexander found this part of the day particularly exciting): 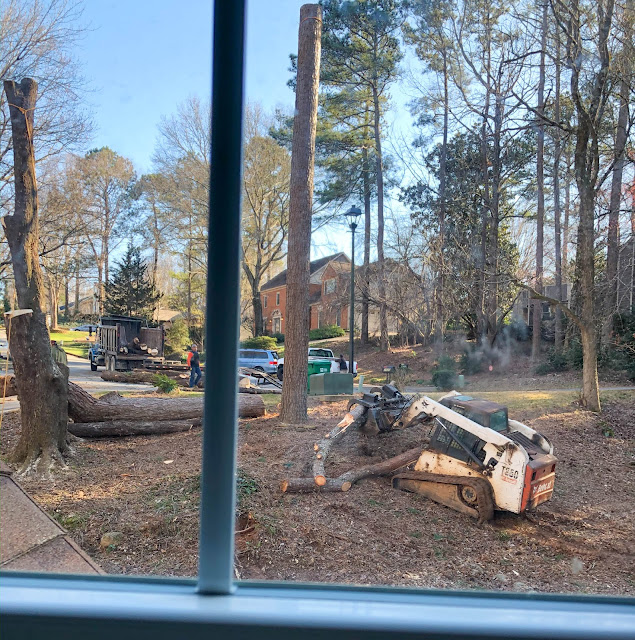 It was a little terrifying for me to watch this process. One of the trees smashed a section of our driveway (which...is admittedly in bad shape anyway...but I wasn't thrilled to have a new crack in it) and once when the bobcat was carrying a particularly large log up the drive way it actually tipped over when it went over the curb. Just tipped right onto the tree trunk it was carrying. The driver didn't seem to panic at all. He just let go of the log essentially (?) and the machine fell back onto its little track/wheels and then he picked the log back up again. It all happened so fast! That operator was smooth.
So here's what our hill looks like now: 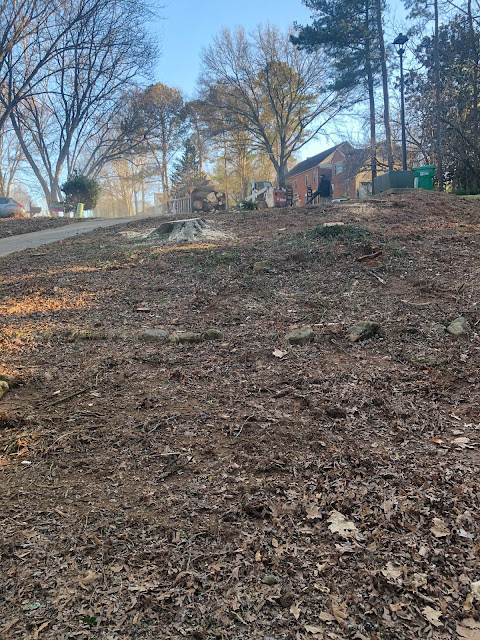 It's kind of surreal to look out of our windows and see the sky!
Here's one of the reasons I was glad to see that big maple tree (that I loved so much) go: 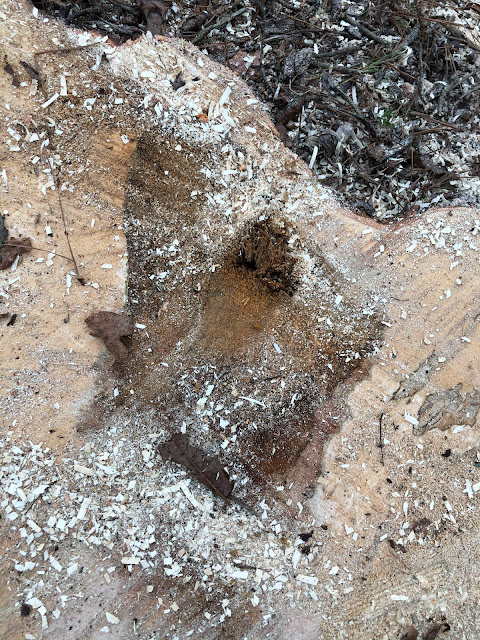 It was beginning to rot from the inside. This dark area is really quite...mushy. You can kind of see where I was able to just grind it with the heel of my boot (maybe?). We don't have to worry about it anymore, I guess. But we do have to worry about what we'll put in its place (though Andrew keeps reminding me that walls come first and then plants). 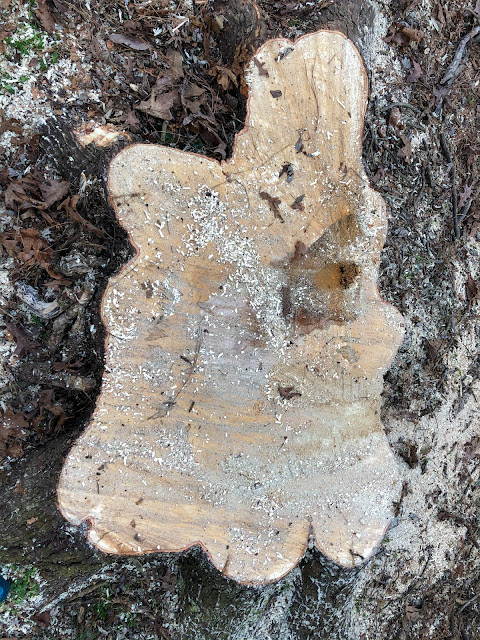 And just as a follow up from their picture this morning when Benjamin, Zoë, and Alexander were settled in reading books while watching the men work, here they are snuggled up together on the floor of Zoë and Alexander's bedroom having a little sleepover after gorging themselves on stories:

Zoë is re-reading The Princess in Black for the millionth time; Benjamin is reading Out-Sniffed, the second book in the Doodlebuged mystery series by Susan J. Kroupa. Alexander was told to just lie still and go to sleep because (1) he was a tired boy and everyone had already read him a million stories and (2) he likes me to stay by him while he falls asleep—even when he's surrounded by siblings—and honestly if he wants me to sit beside him while he falls asleep he'd better be working on going to sleep, not staying up later to read. Like, if he wanted to stay up late looking at books that is fine by me...but he can't hold me hostage while he does so. So it's not like he was forced to not read. I merely gave him an ultimatum: me or books.
He chose me, which probably isn't a huge surprise if you know Alexander.
Posted by Nancy at 12:04 AM