At Alexander's insistence we went back to "The Sand Park" for a picnic on Friday. It looked a little crowded when we got there so, as is our current habit, we hunted around for a less crowded playground. We settled on "The Spider Park," which was empty except for a couple having lunch (the couple turned out to be from church, so we went over and said hello from a distance).
For the most part the kids enjoyed their lunch and spent some time playing on the playground equipment. Alexander, however, was unable to enjoy himself because this wasn't "The Sand Park."
So we made a deal that we would walk down to the sand park to see how crowded it was and if there was enough distance between groups of people we would stay...for a while.
"We tan jut wear our may-ut!" Alexander said, pointing out that we could just wear the masks that we'd brought.
Even so, I wanted us to be able to keep our distance. We are approaching a finish line of sorts—I don't quite know what crossing the finish line looks like—but the race isn't over yet! We still need to wear our masks and/or keep our distance, wash our hands, exercise due caution. My friend Erin's father passed away from COVID yesterday and my friend Annik's father spent two weeks in the ICU (and her brother was also hospitalized). So this is still very real and scary, though on the whole I'm happy to see our numbers going down and vaccinations going up! Andrew just qualified and has been working on getting an appointment. My dad and mom have been vaccinated, as well as Josie and Patrick. Andrew's dad recently qualified for his shot, and already took Grandpa Frank for his. I think I saw that Aunt Nicki got hers (early because of her work). And there may be others. It's all very relieving. But...it's still not over.
Anyway, we didn't wear our masks...? But we were able to stay far enough away from people that I wasn't really worried about transmission. Although the playground itself was crawling with children, the sandbox only had a couple of other groups of kids (most of whom were on the other side of the volleyball net).
Alexander dashed to the sandbox and quickly assembled this sand castle: 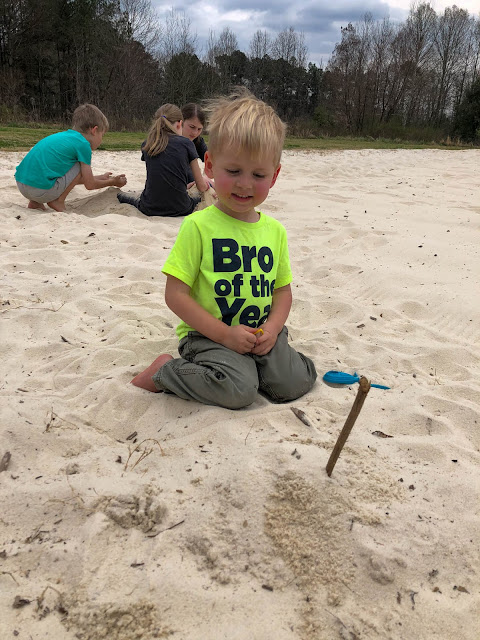 The older three worked on burying each other: 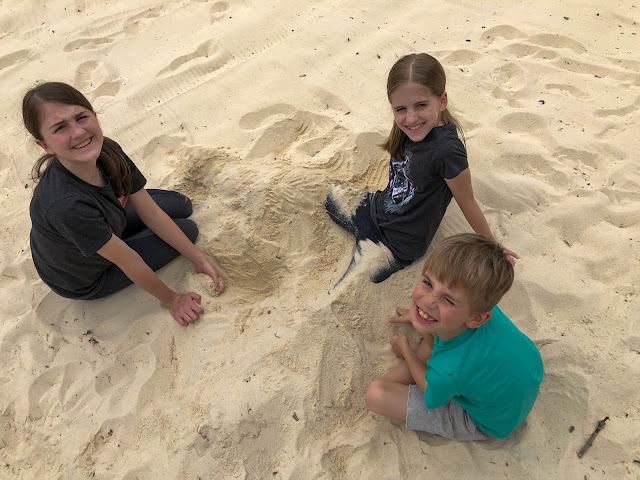 And to keep her injured finger safe and sand-free, Zoë obediently sat on the grass drawing in my notepad...for a while: 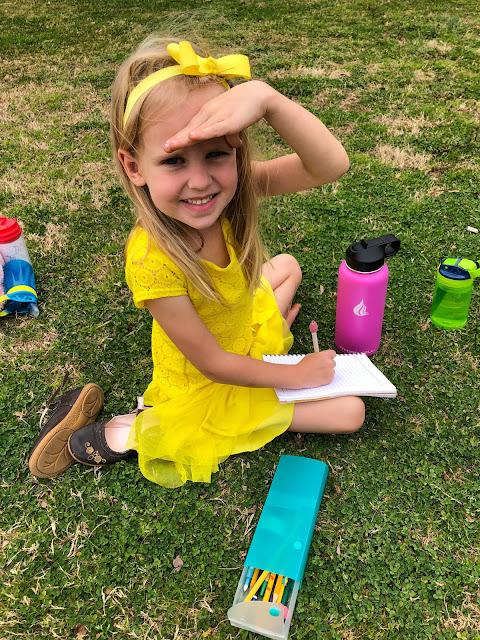 But, oh, that sand looked so warm and enticing... 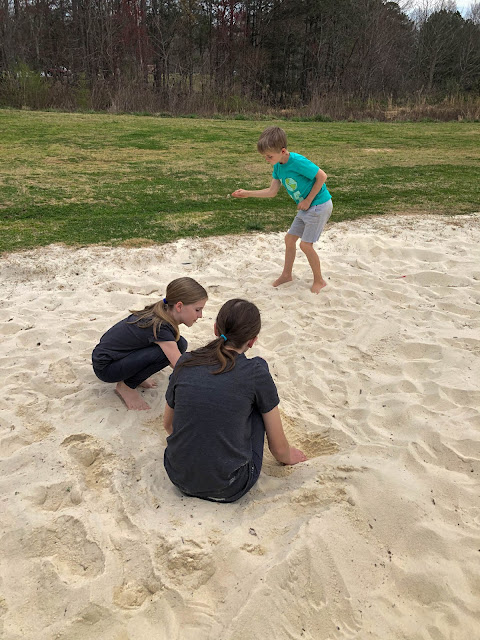 So eventually she sat in the sand, still drawing in the notebook, and stroking the sand with her good hand: 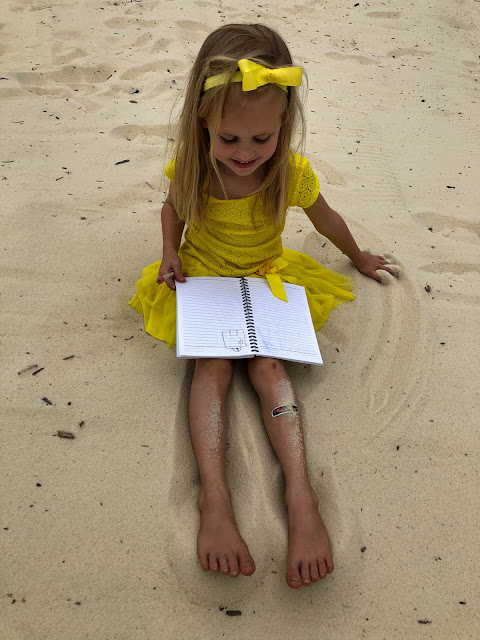 And then, as you probably guessed, she abandoned the notebook altogether, but was still rather careful about her finger. 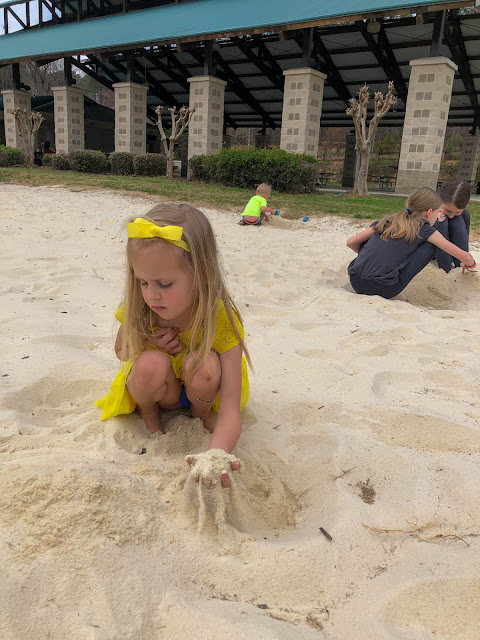 Here's Alexander using the shovel to fill his shoe so he can dump it onto his castle to make it bigger. This saved time overall, he explained, because his shoe can hold multiple loads of sand from the shovel, which he can then dump onto his castle all at once. 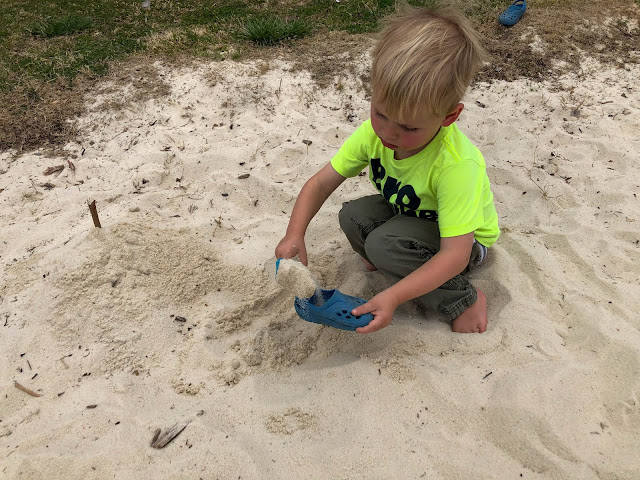 I don't see his logic, because I think it would actually be faster to simply shovel the sand directly onto his castle. But he was having fun, so who am I to argue? 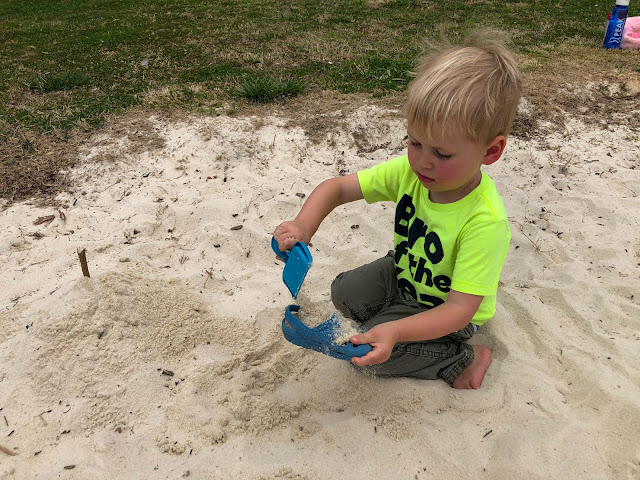 Here's Rachel getting buried a little: 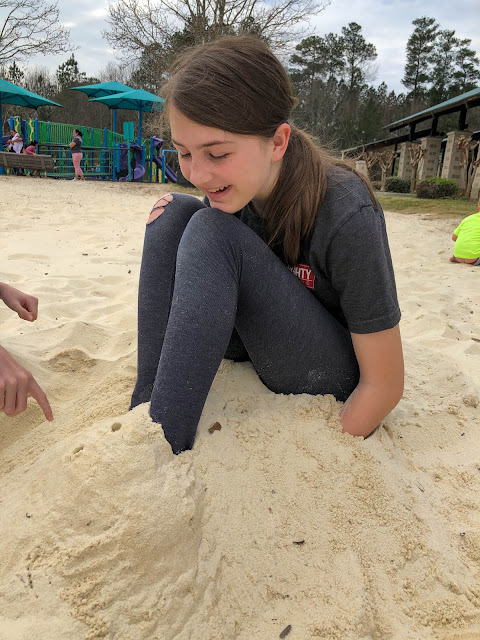 And here's Benjamin making some sand angels, which are very much like snow angels...but messier: 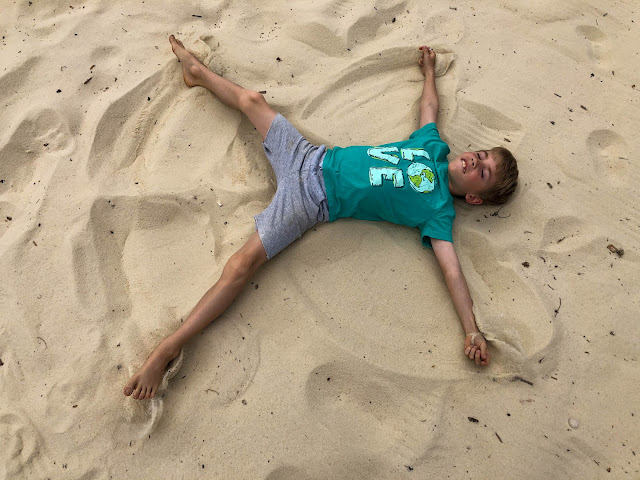 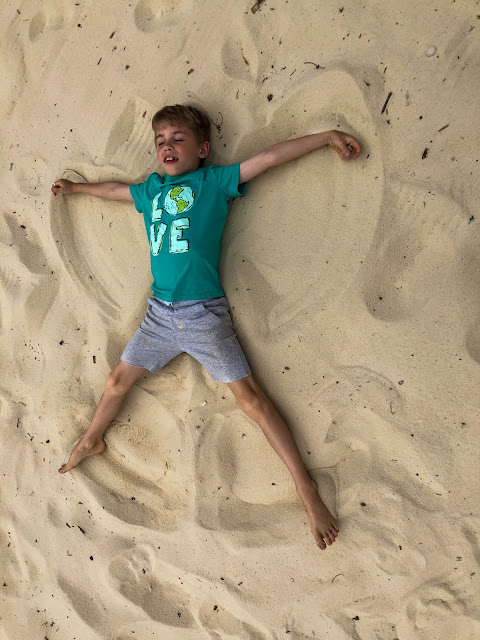 Alexander had to give it a go: 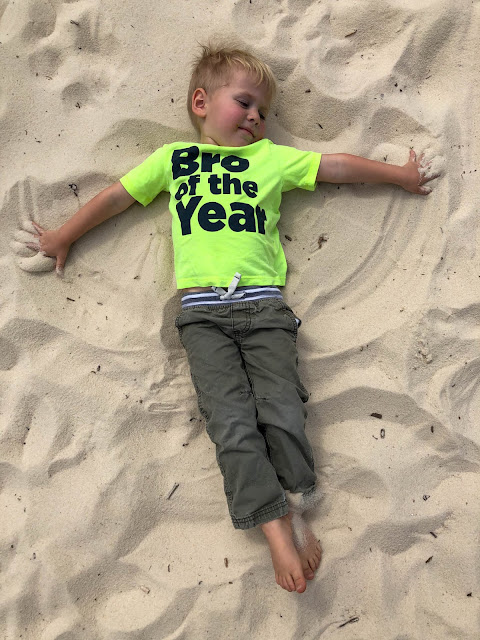 And then Zoë threw caution to the wind and made a sand angel as well (you can see that she's being careful to keep her fingertips out of the sand, however): 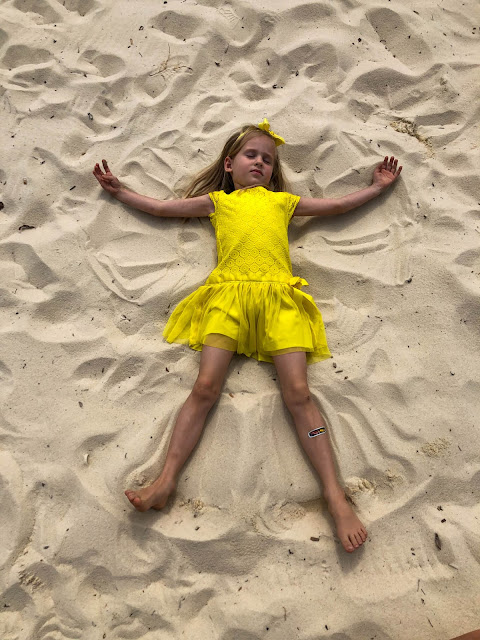 With Rachel sufficiently buried, Miriam decided she needed to be buried as well, so she sat in front of Rachel and let the littler people bury her feet. 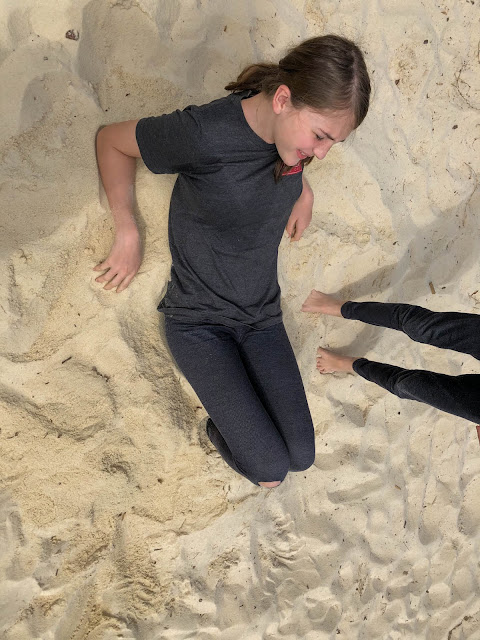 Alexander helped, too, but didn't understand the directive and...do you see that handful of sand he's carrying? He dumped it right down Rachel's shirt before we could stop him. So that was fun for her. 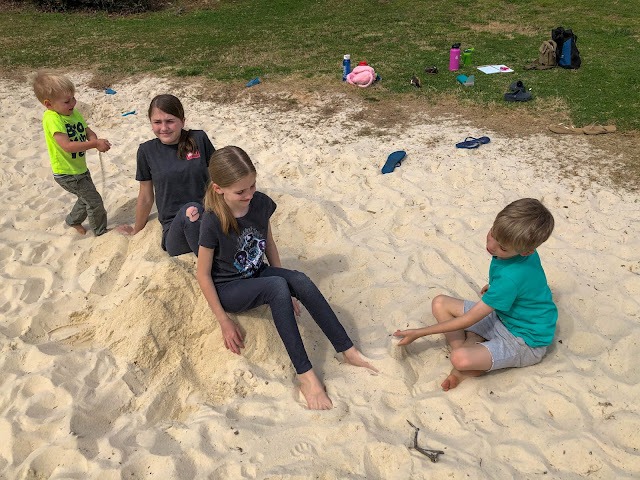 And then, when both Miriam and Rachel's feet were buried, Alexander jumped on top of Miriam's lap and started flinging sand like an overexcited puppy: 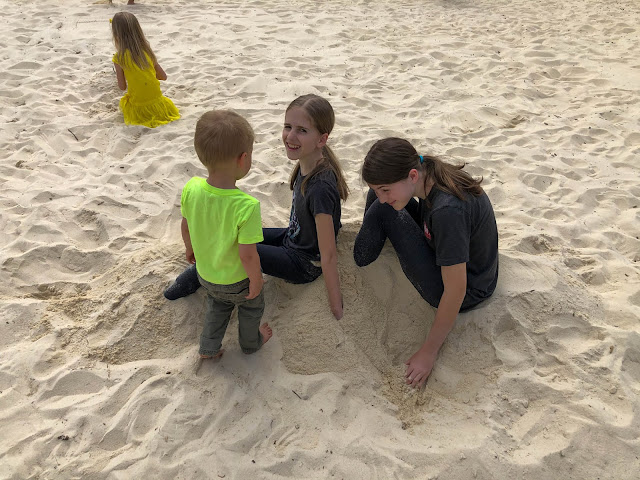 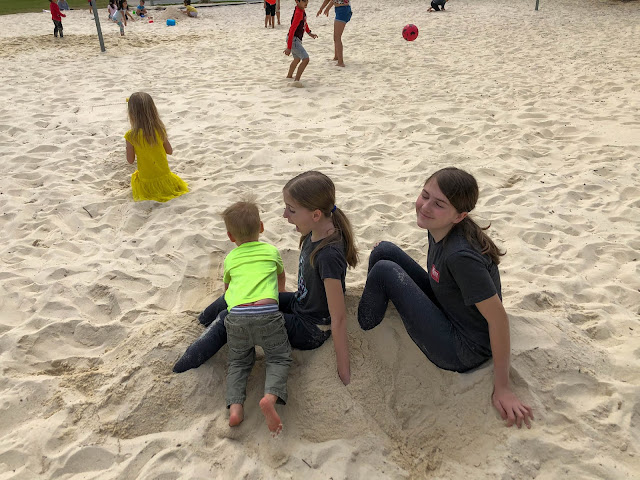 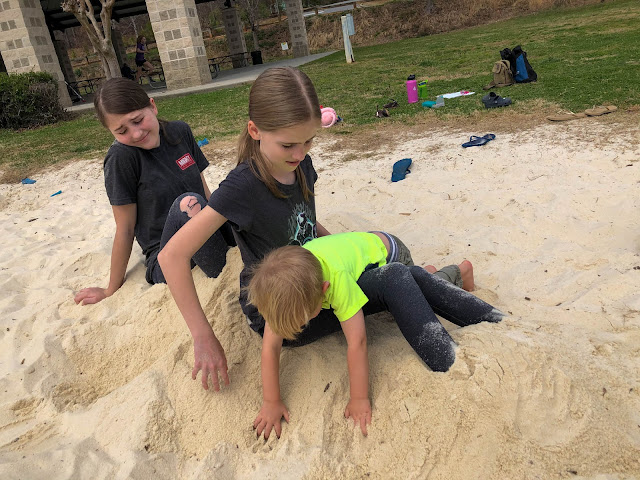 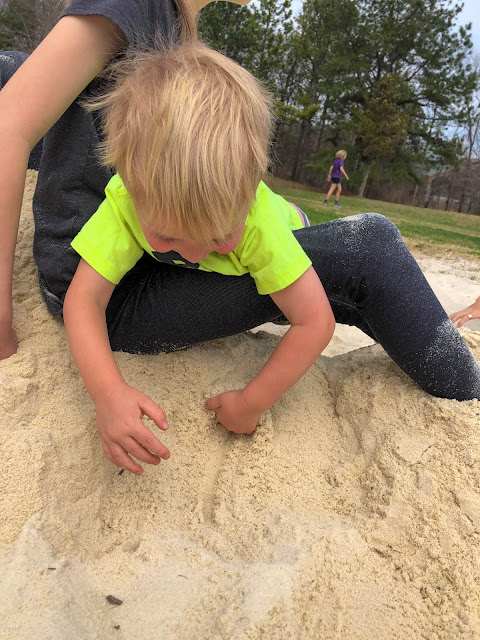 By this time, the park was really filling up, so we decided to take off. We went on a little walk through the woods and landed at "The Train Park" for a little while before heading home. All five kids are on the train in this picture, though you may only count four: 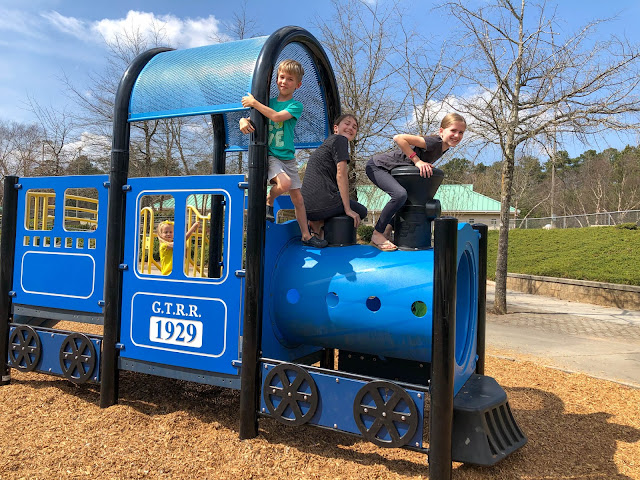 And now there's five (Alexander is poking his face out the hole in the tunnel): 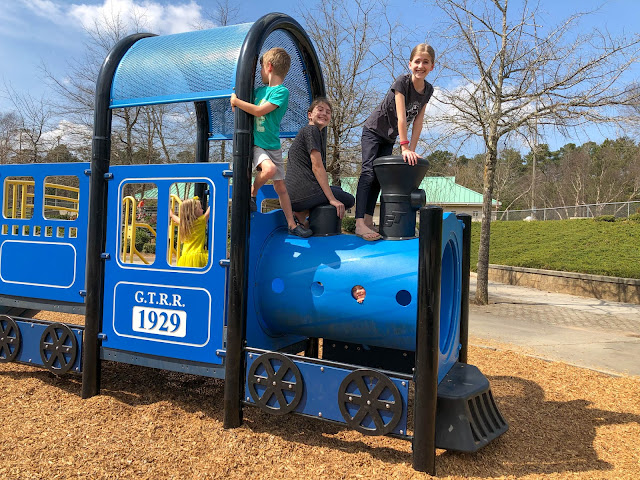