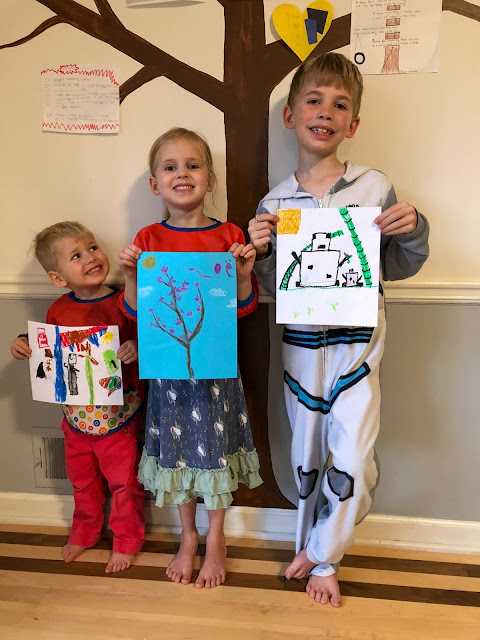 "Do you remember a while ago when you said, when you promised we could do an art project with pastels?" Zoë asked me the other day.

"Have you thought about how you're going to keep that promise?" she asked me.

She likes to keep me on my toes.

I don't think that every sacrament talk is memorable. In fact, I believe very few are. I can only remember so many things, right? But there's one sacrament meeting talk in my brain's filing cabinet drawer of sacrament meeting talks that is about keeping promises that I do remember. I was nine years old. My friend Jade's parents were speaking. I can't even remember if it was her father or mother who spoke on keeping promises, but I do remember that whichever one it was mentioned that they always tried to keep their promises to their children and soon after they moved there the boys (Jade's younger brothers) had begged to go to McDonald's, a restaurant they had heard about at school but had never been to before (they moved from South Africa and given that this was 1994 and the first McDonald's in South Africa opened in 1995, they truly would never have even seen a McDonald's). The parents brushed aside the request with a, "Yes, yes, of course, yes. Eventually we will go to McDonald's..."

And then, after waiting patiently for weeks or months the little boys brought it up again and the parents realized that however silly this burger joint may be, they did promise to take their children to McDonald's, so they gave in and took them to McDonald's. The important thing wasn't really McDonald's but maintaining trust. And that's why we keep promises.

Okay, so I don't remember much about the talk. But I do remember that it was one that left an impression on me...obviously, since here I am talking about it twenty-five or so years later.

Anyway, when Zoë reminded me of my promise I decided that I had better think up a way to keep that promise. So she and I looked at some picture ideas (and pastel methods) and the kids had fun drawing with the pastels (and then their drawings were immediately taped up high on the wall where no little fingers could touch and smear them). Benjamin drew a Minecraft panda. He's researching pandas right now and has found pandas on Minecraft. Alexander copied Benjamin's picture and added a whole bunch of his own little three-year-old flair to it. Zoë drew a tree with blossoms on it.

Miriam and Rachel sat down to do some artwork as well. I'm not sure that Miriam ever finished her picture (she was also working on a tree). Rachel decided to do a linocut rather than work with pastels. 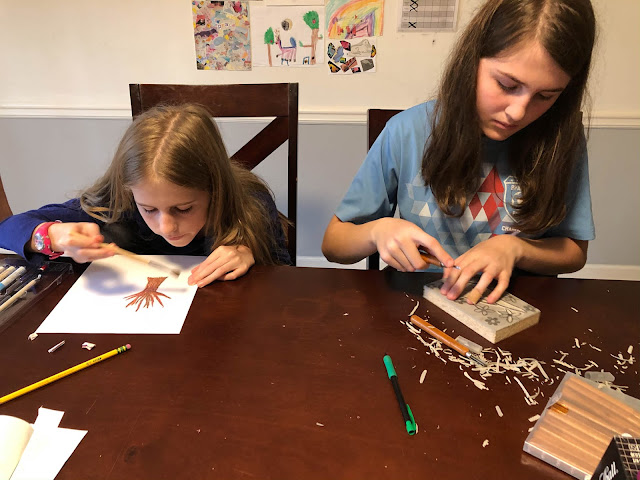 Rachel made a lovely linocut of a bird (which she needs to make prints of so we can put all the ink away before curious little fingers find it) and then I wanted to make a linocut as well, so I sat down with a lecture (on education and social injustices) that evening after I put the kids to bed and whipped up a linocut of my own. 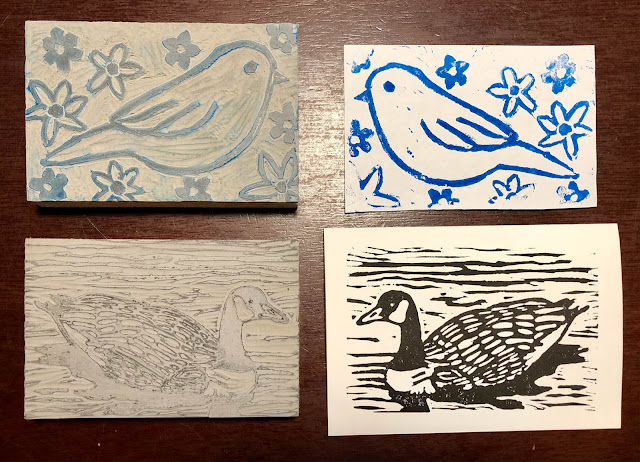 There's a poem in my mind that I'm working on about these geese. It's not ready yet. But hopefully it will be ready soon. 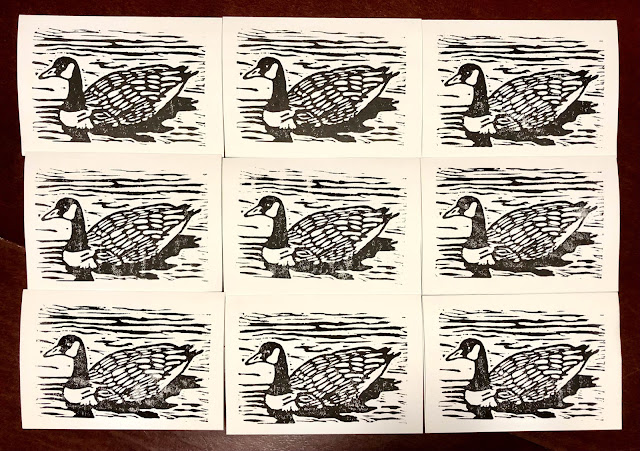 I actually spent some time sketching geese while the kids were working on their various projects but all of my geese ended up "kinda derpy-looking," as my sweet pre/teens gently informed me. So I had to have my friend the internet help me figure out how to draw an un-derpy goose. After I had finished transferring my goose to my block, I went into the kitchen to show it to Andrew, who was scurrying around making dinner.

"Hey—I'm trying to show you my goose!" I said after failing to get his attention several times.

"I hope that's a euphemism," he said turning around.

And our pre/teens just about died on the spot. We've entered a very fun, very embarrassable age for them.

"But do you see how un-derpy it looks?!" I gushed.

We've entered a very fun, very embarrassable age of parenting where we've suddenly found ourselves very not "with it." This is actually fine with me because I was never very "with it" to begin with. But now that I am as old as I am, I am no longer expected to be "with it." It's somewhat freeing...when my kids aren't telling me things like, "Your body starts decaying at age 25 and you're well beyond 25..."

Anyway, later that night Andrew asked why—out of all the animals in the world—I had chosen a goose.

"Like, why a goose?" he asked. "Why not a mongoose or something? There are just so many animals to choose from and a goose seems so random."

By that logic, any animal would be a random choice.

"Because I've been thinking about geese a lot," I explained.

I've been thinking about geese for over a year now. It was December of 2019 that I decided to reach out to Mr. Lowe, through Penny Sidor. It was lovely to correspond with them both. And they both ended up sending me new recordings to enjoy, which was so nice of them! Unfortunately, Penny's were mailed at the end of February 2020 and they didn't end up in my mailbox until at least the middle of March 2020 and...by then we were experiencing...this...past...year. Which...hasn't that been fun?

So I'm a bit behind on my correspondence.

And have maybe had Penny's envelope sitting on my desk (along with a few other things...my desk is a perpetual mess) to remind me that I still needed to send her a thank you note.

When I realized it had been nearly a year since I received her package (and had been more than a year since she mailed it), I figured that my thank you note needed to be pretty wonderful. And I thought she would appreciate one with a Canada goose on it because we'd spoken about Wade Hemsworth's song Wild Goose (which she recorded with Mr. Lowe on the tape that he gave me back in December of 1994).

I was reflecting on this whole experience as well—of my teacher using music in the classroom, of giving me the tape that would carry me through so many new experiences (I transferred it from tape to CD to take to Russia with me, for example, because this music was simply "home" for me), and finally of ending up in the southern United States where Canada geese overwinter and how much I enjoy thinking that these geese know more than one place like home, as I do—for one of my classes. (It's kind of a weird class, to be honest; our most recent assignment was to think of five "life events" and come up with some sort of "media" to go along with it, so in this case I paired that life experience with the song Wild Goose).

Anyway, suffice it to say, I've had geese on my mind for a while. But at least I've sent off that thank you card (finally).

In the morning when Zoë saw my prints she wanted one for herself, so I gave her one and she coloured it in while I read to the kids (we're working on some Shakespeare stuff). Inside she drew some more illustrations and verbally told the story of a rainbow goose who lays diamond eggs and a pincess who... 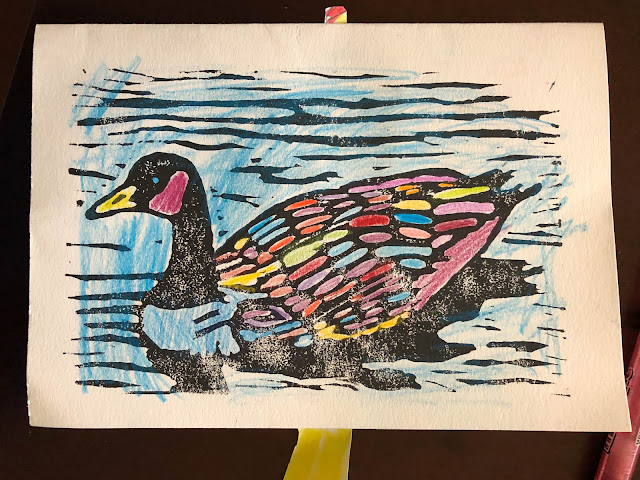 I need to convince her to write that story down on paper.