We went to the park on Friday to enjoy some fresh air pollen. The kids had a good time running off steam, I think. It's always nice to get out after a big rain storm. We watched The Pirates of the Caribbean recently so Benjamin has a sword tucked into his jeans so he can play the bit of a swashbuckler. 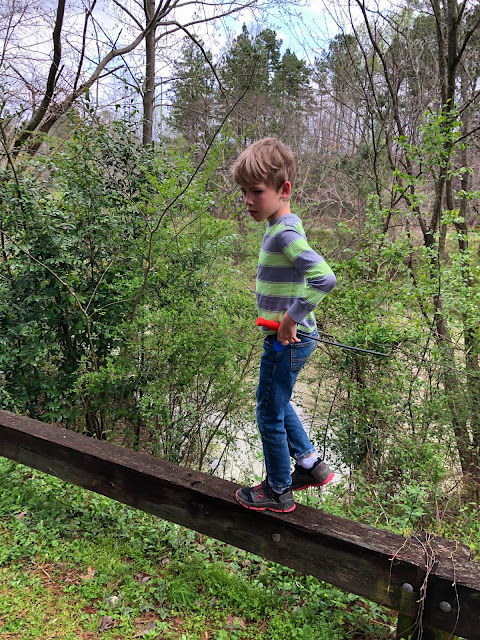 The forests are awash with purple lately: redbud trees, wisteria, other things I can't name. 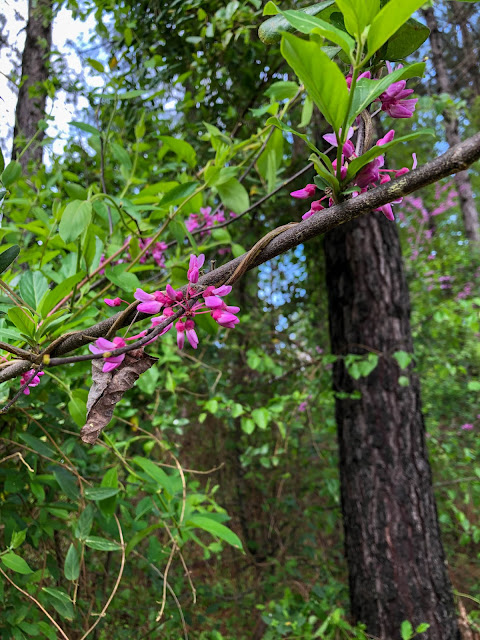 While walking along the trail we pointed out to Alexander that his boots were on the wrong feet. He responded by crossing his feet and announcing, "Fixed!" (And you can see a lovely redbud behind him). 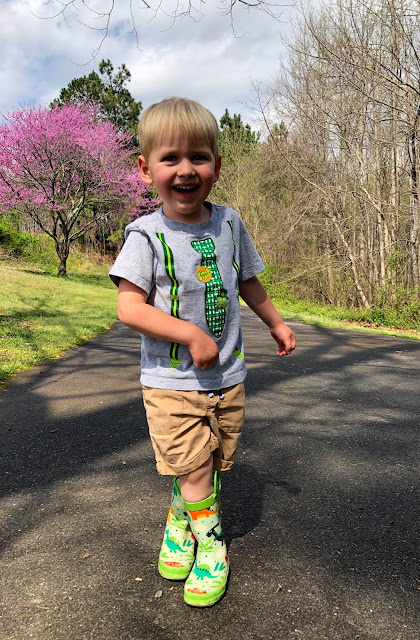 Here he is chilling in a little bubble: 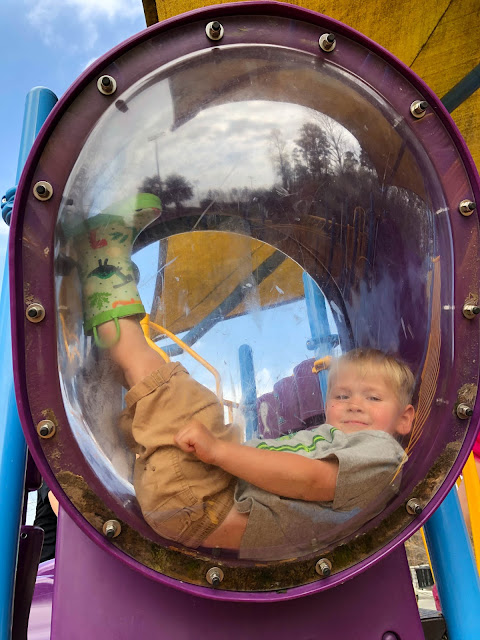 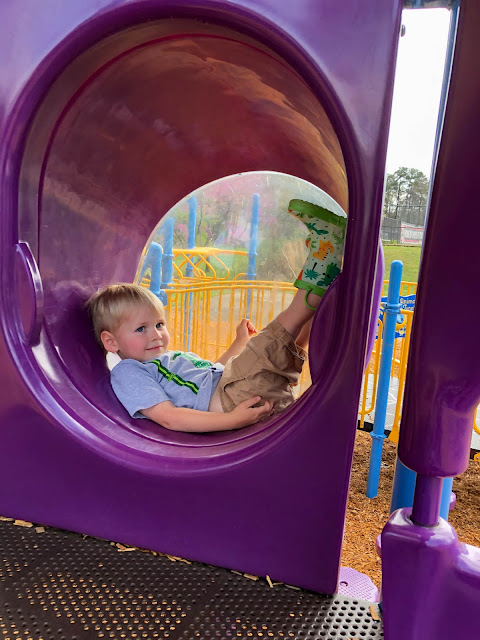 The kids were having a swing jumping contest and this picture of Rachel flailing herself out of the swing so reminded me of Rachel from years ago. Here she is just the other day: 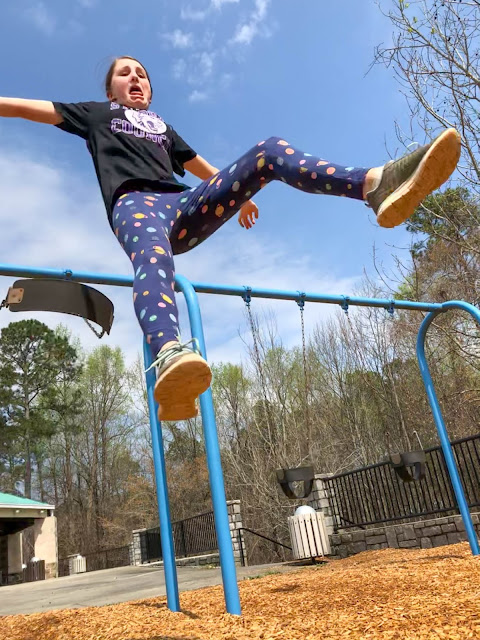 And here she is in 2013 at our Eno Trace playground: 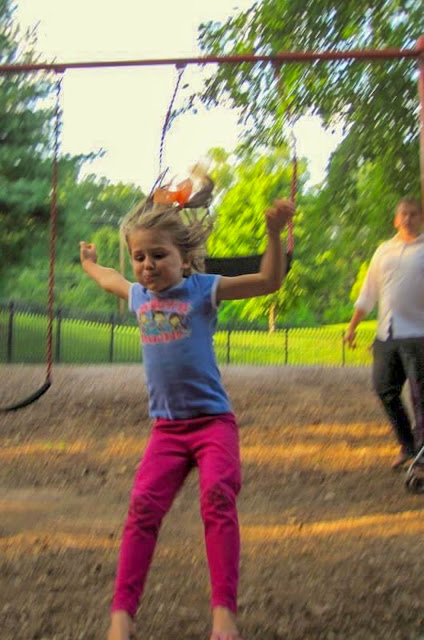 See? It's just about the same. Though she does tend to get more air these days. 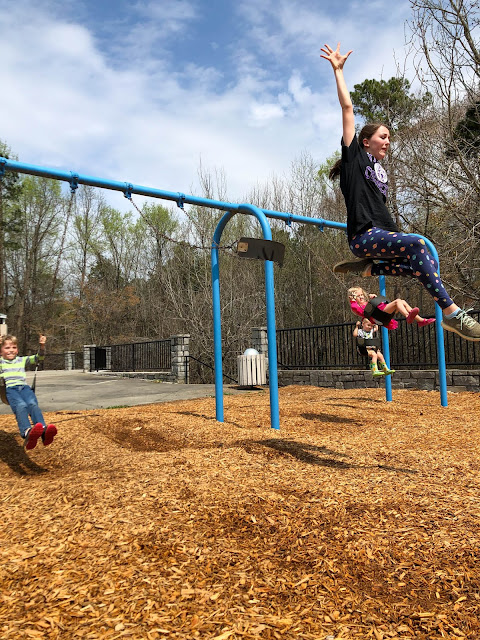 Benjamin also had fun launching himself out of the swings: 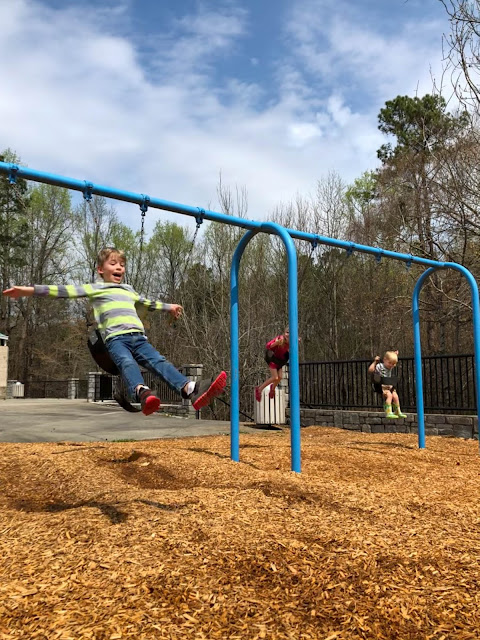 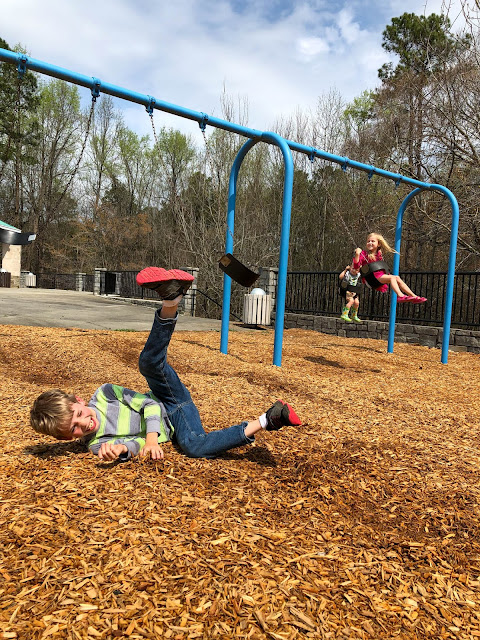 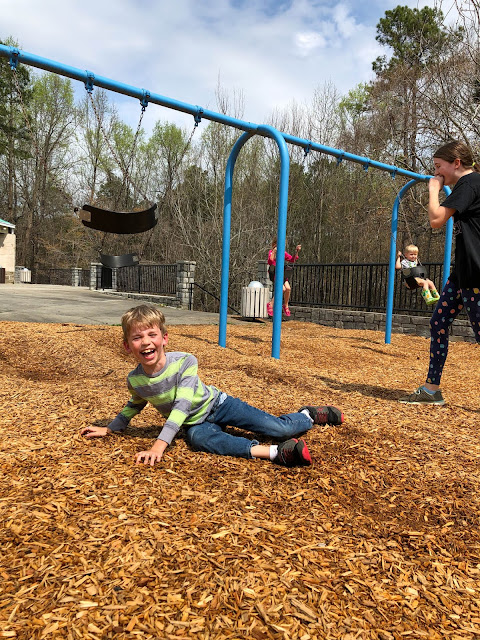 Here's Miriam giving it a go: 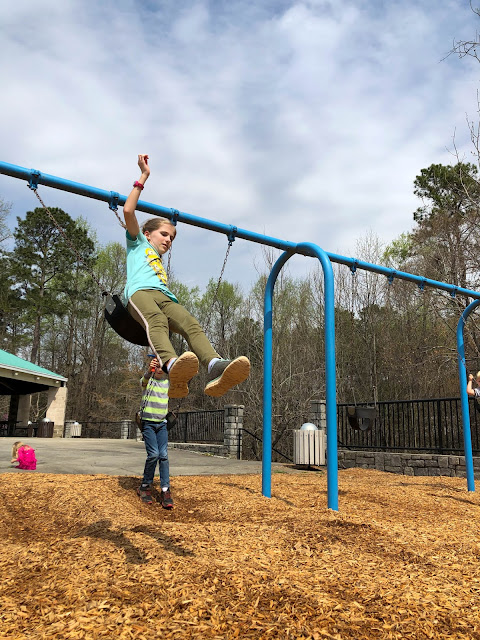 She was much more interested in "judging" the various events (who could jump the highest, ...farthest, ...silliest, make the best crash landing, etc.) than she was in doing any actual jumping.
Here's Benjamin doing a little more adventuring (while the rest of us stuck to the bridge): 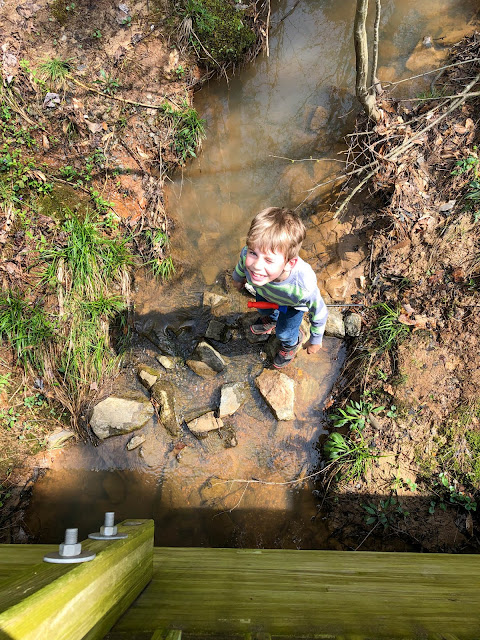 And here's a view of the pond all covered with pollen: 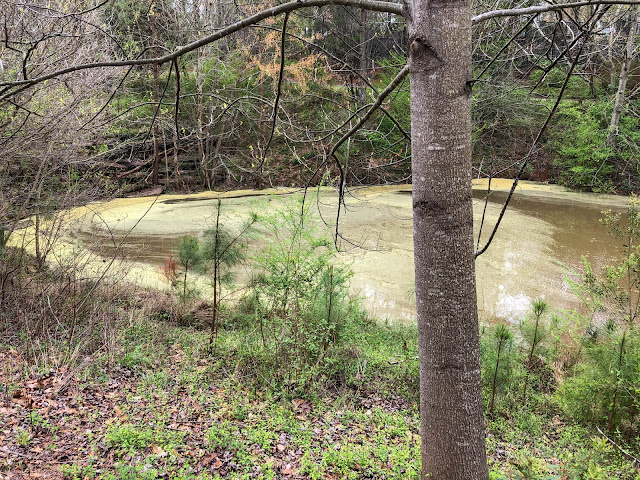 It's pretty bad out there right now! I've been sitting outside reading articles on my iPad while watching the kids bike and...that makes it very easy to see how much pollen is landing on me when I'm out there. My screen gets so dusty while I'm out there!
Here's our final shot from the park—the kids on these little...step...stone...thingies: 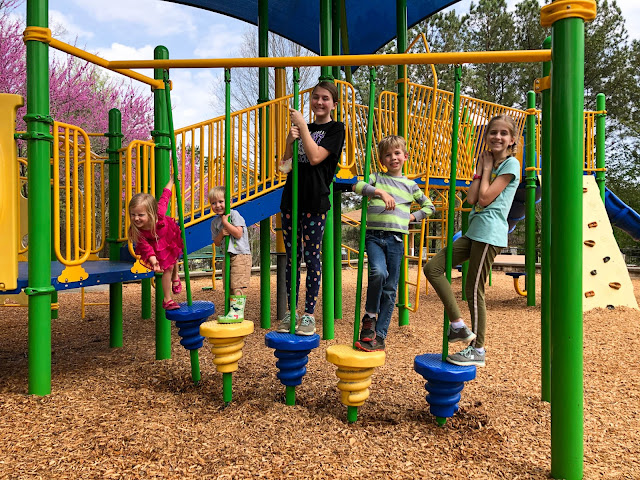 We also went for a family walk/bike ride that evening. Benjamin is very self-sufficient on his bike these days and can make it around the block all by himself (sometimes multiple times) while Andrew and I are moseying along with the little kids. 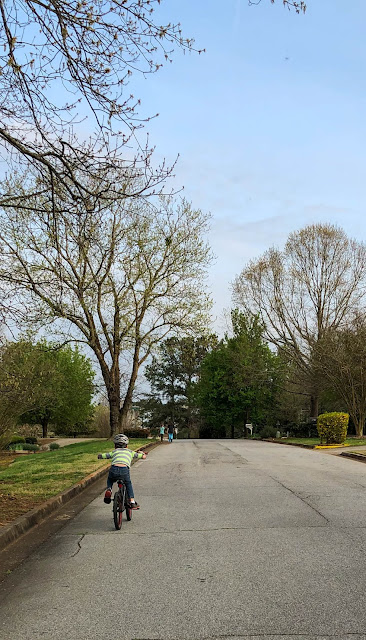 He did have a little accident on the way home today; he hit some debris in the cul-de-sac and wiped out, ripping a hole in his pants...and his knee. But I think he'll be back on his bike soon enough!
Here are the little kids getting started on their bikes after walking them up the big hill: 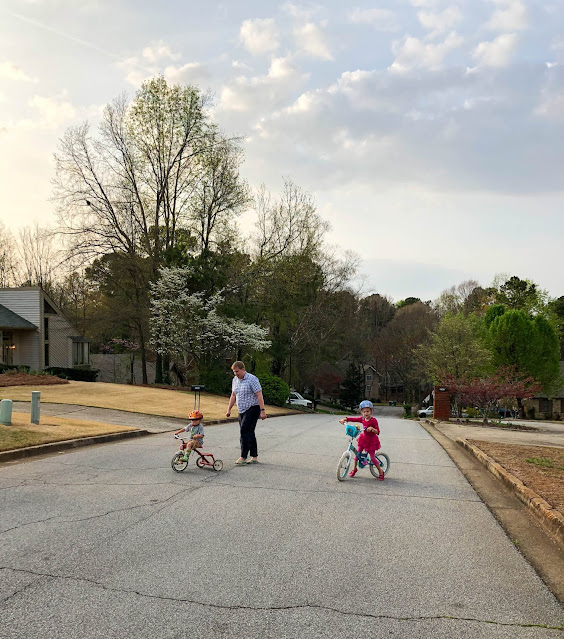 Zoë is really pretty self-sufficient on her bike as well. She can get started all by herself and only walks it on a few of the hills (there are so many hills around here). 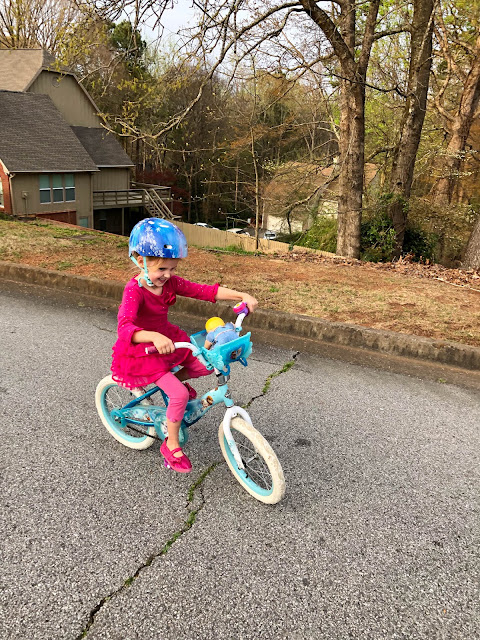 Alexander took forever to make it around the block, though he largely did it by himself. He was so happy we let him try. He's been asking for a long time, insisting that he's super good at biking now and can go uphill and downhill by himself...which is true in our cul-de-sac. But when we got to the hills beyond the cul-de-sac it was...less true. Andrew and I took turns carrying that blasted tricycle up and down the hard hills. 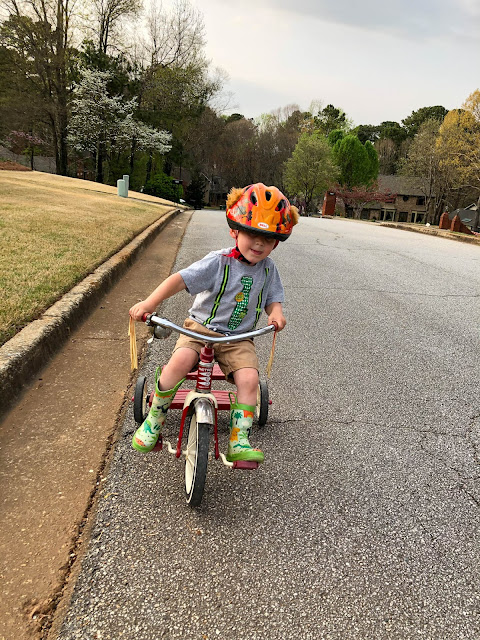 We also had to stop to blow every single dandelion puff (which was very cute...but very time-consuming (but those seeds aren't going to plant themselves, you know)): 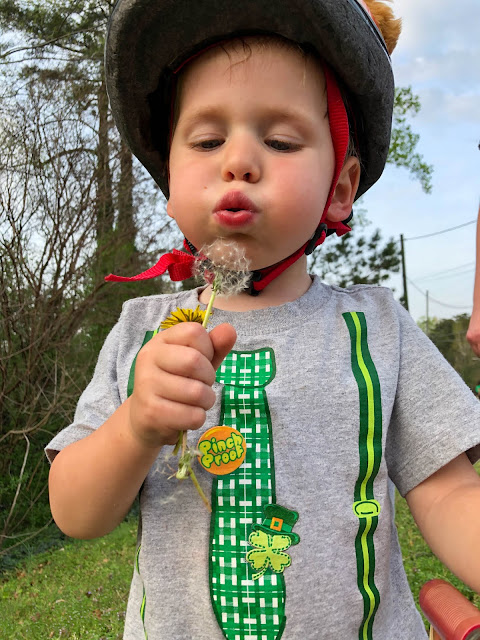 He was so proud of completing this journey around the block that he decided he'd never have to ride in the stroller ever again. Unfortunately for him, Daddy was so sick of lugging around the tricycle and would much prefer pushing a stroller to that...so they've kind of locked heads over this. On Sunday we went for a walk around the block and Alexander ended up in the stroller and he was not happy. He pouted the whole way and then when we got home Grandpa called us and Alexander told on us!
"Daddy wouldn't let me ride my bike on the walk!" he wailed.
It was rather pathetic. And now he has the promise of being able to ride his bike around the block "another day."
He's just so slow! If we let him walk (or ride) the walk takes forever and sometimes we just want to squeeze it in quickly. He gets plenty of opportunities to bike around and walk outside of our "family walk" time.
For example, here his is taking a break from all his bike riding this afternoon, presenting me with a bouquet of flowers: 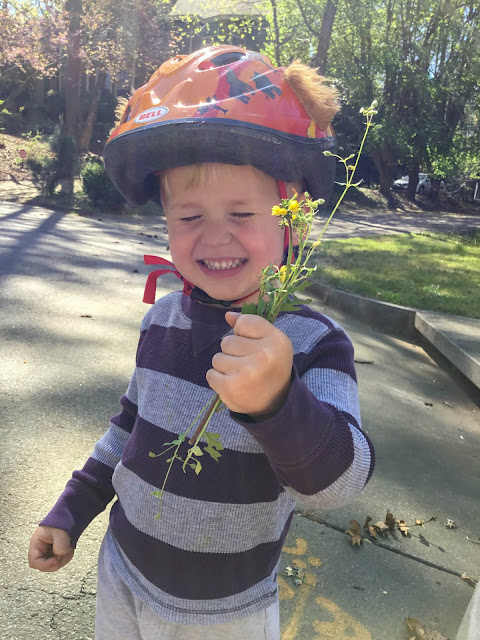 And here he is trying to share his "pirate ship" snack with me. He made it by taking a couple bites out of an apple slice and sticking a veggie straw mast in the middle. It looked...yummy...but I didn't want to deny him the joy of eating that pirate ship himself so insisted he could keep it. 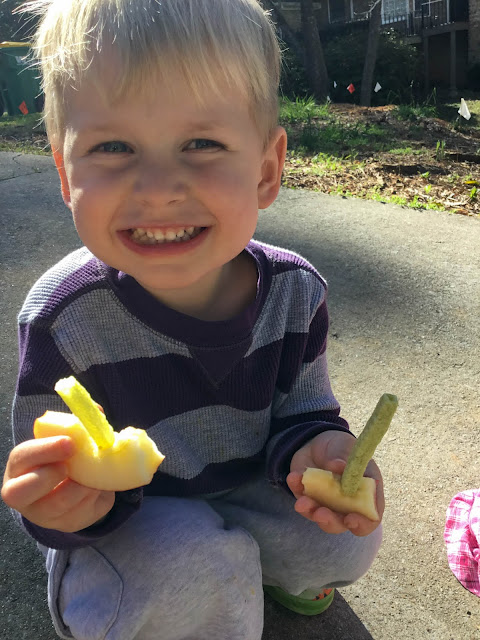