I had my 20 week (and 6 day) appointment today, which included an ultrasound and a glucose test. I managed to keep the glucola drink down, so that was a bonus, but my blood draw went a little horribly. There's this one nurse that I'm never sure about...and I got her today. And when she looked at my veins and said, "This will be a tough one," I thought to myself, "Maybe we should wait for someone else..." because I've often been told my veins are like plump little juice boxes.

Let's just say she did not do a great job and forty minutes later I was still bleeding. She ended up slicing my vein a little bit? It's fine now; it just hurts and is bruising.

The ultrasound took quite a long time because baby was in a tricky position. The ultrasound technician found everything she needed measurements for except for the head. Baby is already solidly "presenting vertex" and no amount of prodding was going to make it budge (although it was certainly flip-flopping all over the place). I had to get up to empty my bladder in the middle of the ultrasound so we could keep trying to measure baby's brain (because that darn bladder was in the way). 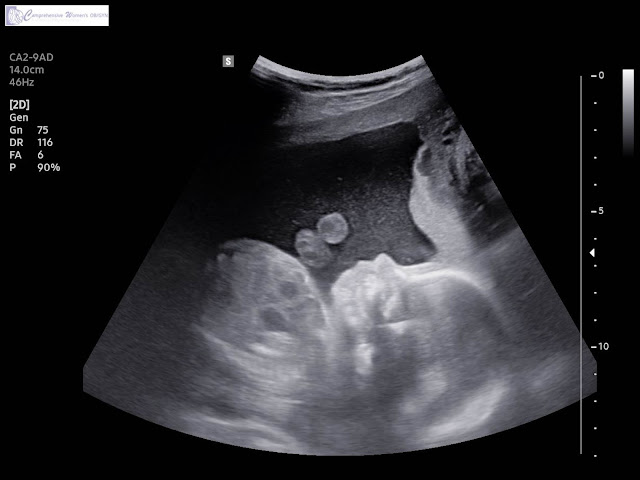 But we finally got a clear shot. Everything's looking great.
After the appointment I came home and filled balloons with confetti, which is how I told the kids I was going to tell them the gender. But instead of having pink or blue confetti inside, I tricked them with both. They were very confused.
Some of the papers inside were white and on those papers I had written XX, revealing the gender of the baby. Poor Benjamin, the only kid on "team blue" was the first one to find a white dot.
"What does XX mean?" he asked.
"A girl?" Miriam asked. "It's a girl."
And there was much celebrating, while Benjamin went away to quietly mourn the loss of the baby brother he'd imagined. Andrew found him and talked to him about statistics and how boys are usually outnumbered by girls. Though it looks like that's not quite true worldwide anymore (males have overtaken females (49.585%)), it's still true in the United States (where females represent 50.8% of the population), and is certainly true in the families that Andrew and I grew up in.
Our child "pattern" is the same pattern my siblings came in: girl, girl, boy, girl, boy, girl.
Andrew's family is: boy, girl, girl, girl, boy.
Benjamin didn't stand a chance.
Actually, he stood about a 50% chance. But he already knew the odds were stacked against him when he explained at dinner the other night that although male sperm swim faster, they die sooner, while the female sperm live longer but swim slower.
(To which Andrew replied, "Whelp. Homeschool's working.")
Anyway, here's Zoë still bouncing around the house squealing a good ten minutes after the gender reveal: 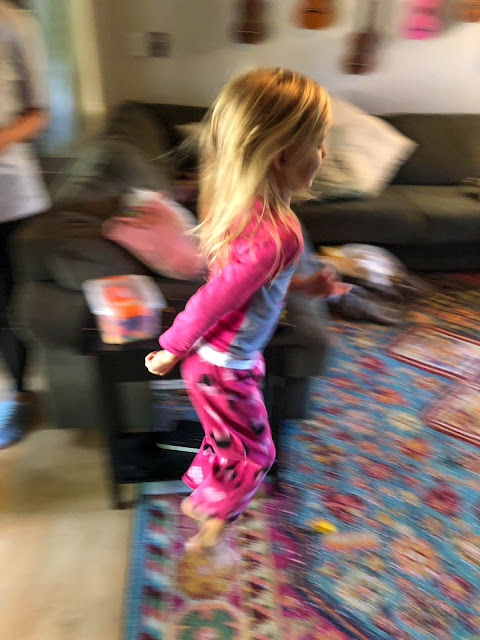 She is over the moon.
Rachel made pancake for dinner, but waited until I got home to make them so that she could make them celebratory pancakes. She dyed them pink! 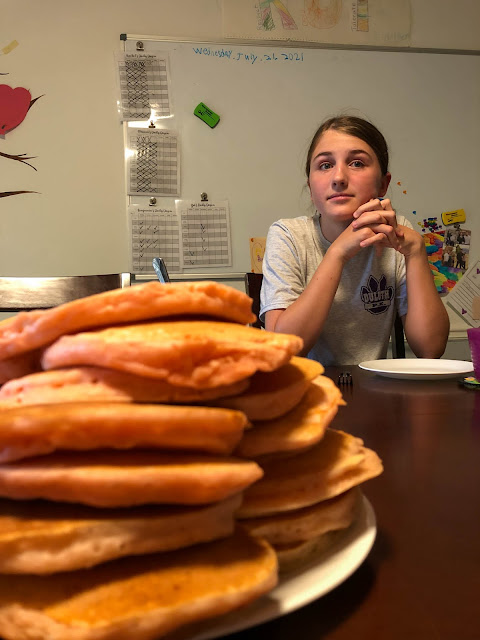 Zoë and Alexander chose all pink dishes. And Zoë had Alexander pretend to be his little sister so she could practice doing hairstyles for when her real sister gets here: 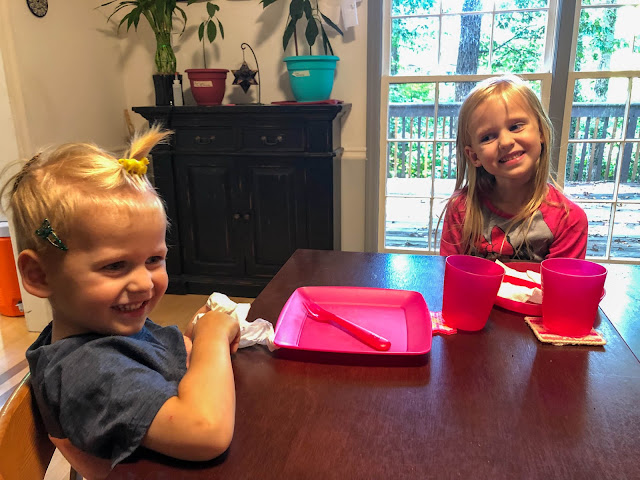 Alexander will do pretty much anything Zoë asks him to do. Did I ever include a picture of them "playing train" together? Alexander was so pleased when Zoë invited him to "play train" with her, though he couldn't quite figure out what the scarf was going to be used for. "Maybe it's going to be the station?" he guessed.
He and I were both surprised when Zoë tied the scarf around her waist and had Alexander walk behind her carrying it.
Playing train, see? 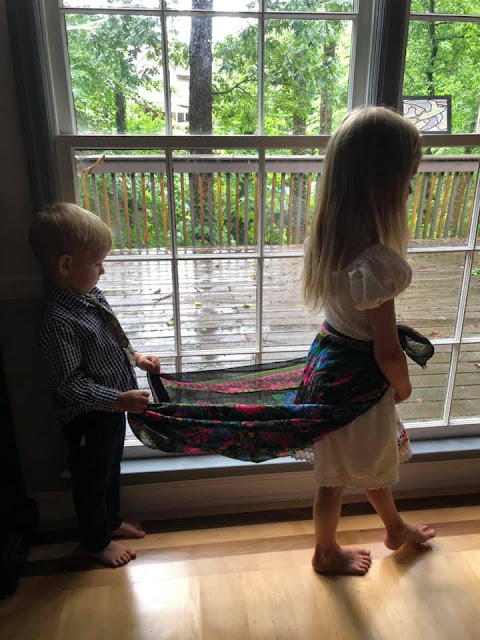 Anyway, I'm sure the pink pancakes were lovely. 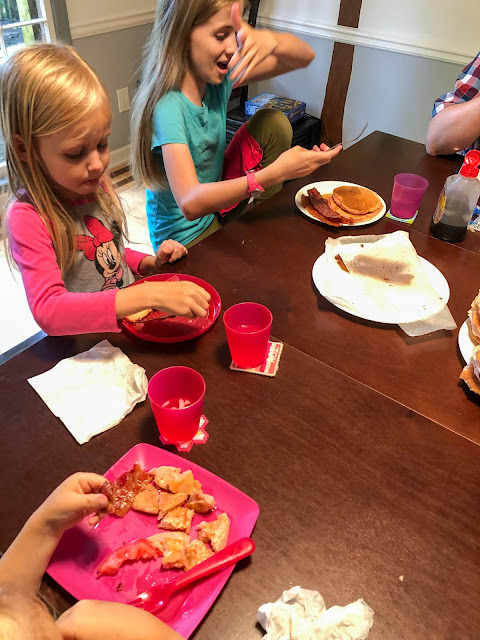 I had Caprese salad (plus some leftover Panda Express (heavy on the vegetables) from Rachel's birthday dinner last night) because pancakes aren't really something my body can metabolize (assuming my placenta is overproducing placental lactogen (an insulin blocker, which in essence raises my blood sugar, which raises baby's blood sugar...see?)). 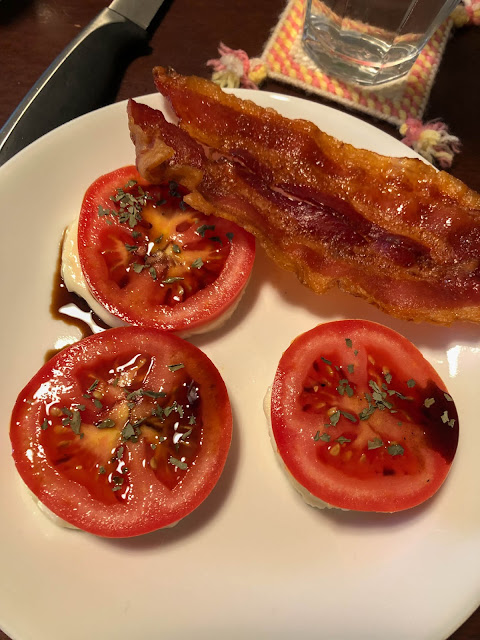 Here are a few more pictures of Baby #6 posing so nicely for the camera (with her hand curled under her chin): 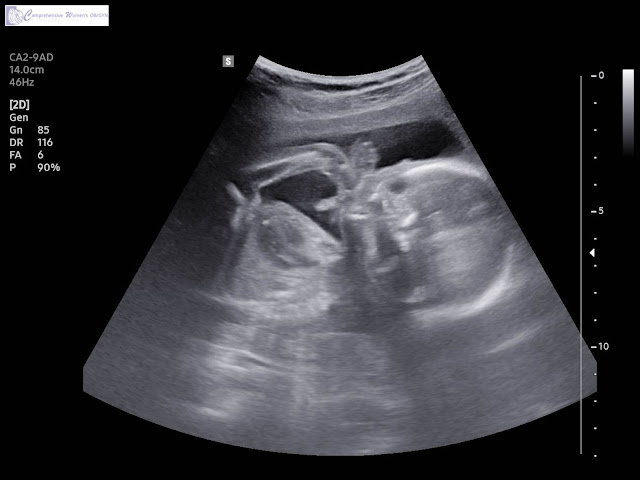 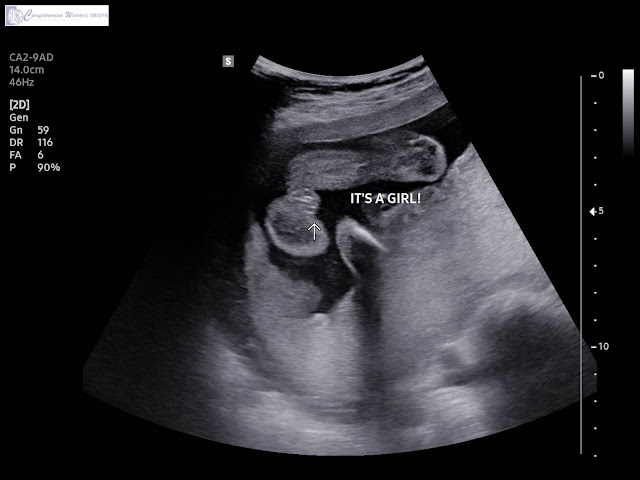