Our ward is back to meeting 100% in person, with masks optional, and no real option for zooming into meetings. Fortunately, I've been so firm about refusing to attend in-person activities with my little people (who are not vaccinated because...they can't be yet!) that the bishop gave us special permission to surreptitiously stream sacrament meeting for the time being. Honestly, I'm a little annoyed that the reason given for this change (at the stake level) is that "everyone who wants to be vaccinated should have had time to be vaccinated by now" because that simply isn't true in the case of children. But I'm not sure everyone is aware of this.
As a nation, we really have been neglecting children in this whole equation.
For example, my "ministering sister" stopped Andrew in the hallway to ask about my whereabouts. He said that I'm staying home with the kids.
"Are they sick?" she asked.
"No," he said. "They're not vaccinated."
"Oh!" she said with shock (because we're the well-known liberals in the ward). "I didn't think your family would be against vaccinations!"
"We're not..." he said. "But there is no vaccination for children under age 12."
"Really?" she gasped. "I had no idea! I thought everybody could be vaccinated!"
Her kids are all young adults. The youngest just graduated from high school. The oldest just graduated from college. None of them are married (there are no grandbabies) and all of them are vaccinated. She had no reason to be fully aware of the vaccination details for younger kids.
So, here we are...still at home (and simply dreading orchestra (even though, again, the little kids and I will be outside the whole time...just waiting for big sisters to be done)) having church all on our own.
Andrew (and sometimes Rachel) have been baking bread for sacrament every week, which has been lovely. Andrew now does a small sacrament service just for us before he and Rachel leave for church. And then later Rachel does a video call with us so we can listen to the speakers (and hear Andrew play the organ). Then we're on our own for classes since those aren't being streamed anymore.
This week was particularly fun because it was Pioneer Day on July 24!
Here's Benjamin with his pretend beard: And here's Miriam showing off her new glasses (she rather enjoys seeing things, as it turns out): 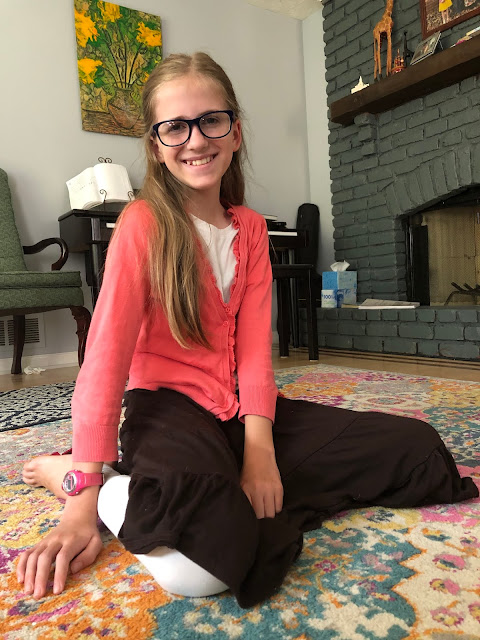 We gathered around the kitchen table to sing some "heritage" songs about pioneer children, broken up with a few short tales about life in various pioneer pitstops: 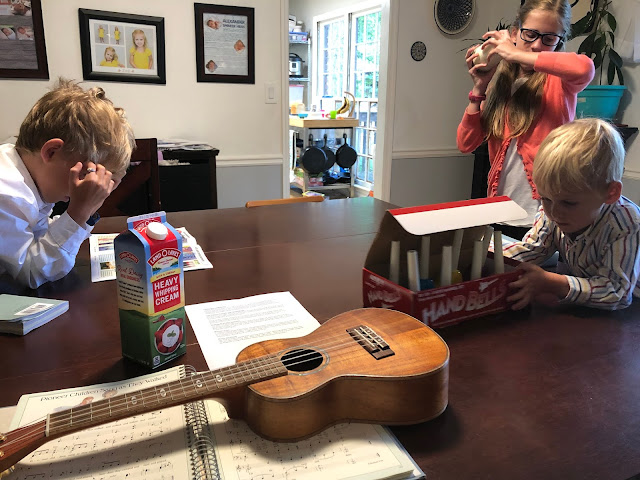 (You can ignore the date on the board; clearly it had been a few days since we'd changed it since we typically ignore it ourselves over the weekend): 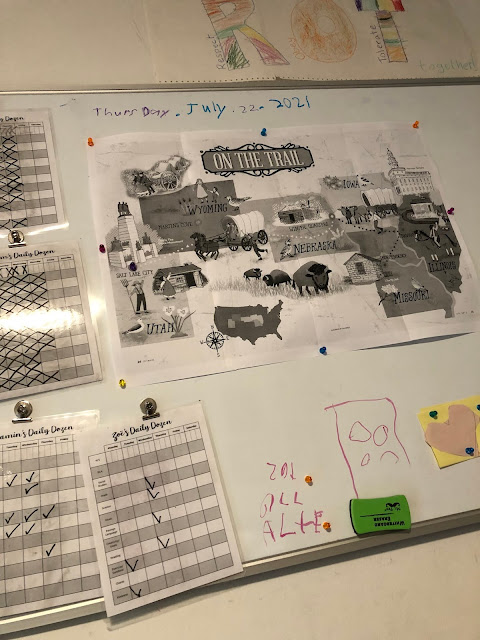 We travelled from Independence, Missouri to Nauvoo, Illinois to Winter Quarters (now Omaha), Nebraska, to Martin's Cove, Wyoming, and into the Salt Lake Valley. We talked quite a bit about Green Flake, who was one of the first pioneers to enter the valley (but who is also someone you don't typically hear about in primary, unfortunately). Benjamin is rather obsessed with life on the frontier so he shared many fun facts with us about life on the trail.
After we'd had our fill of history and felt we had learned some of our pioneer heritage songs well enough, we filled a jar with heavy cream and shook it while we sang so we could churn the butter.
Here's Miriam taking a churn churning (as Andrew is prone to saying): 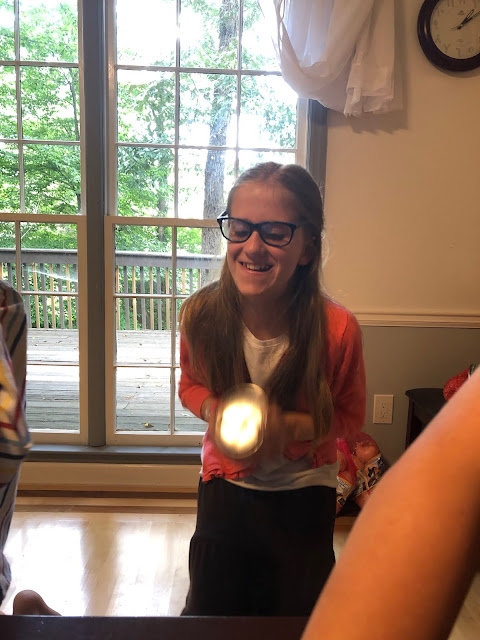 Really I suppose it was just shaking, but it works. I wasn't sure we'd ever get to butter with Alexander and Zoë taking turns but eventually the cream thickened up into a lovely whipped cream and then finally Miriam managed to "break" it and we were left with a lovely lump of butter and some fresh buttermilk, which we enjoyed with pieces of the bread Andrew made last night: 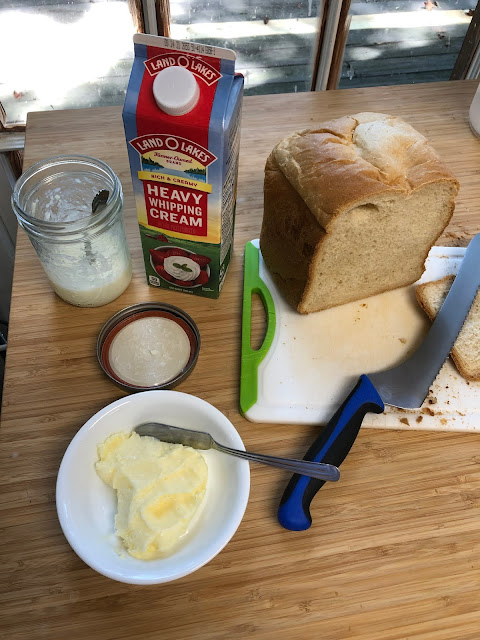 Benjamin insisted the pioneers ate a lot of apricots as well, and lucky for him we just happened to have some dried apricots in the pantry, so they had some of those with their fresh bread and butter. It was a lovely little pioneer feast (snack). 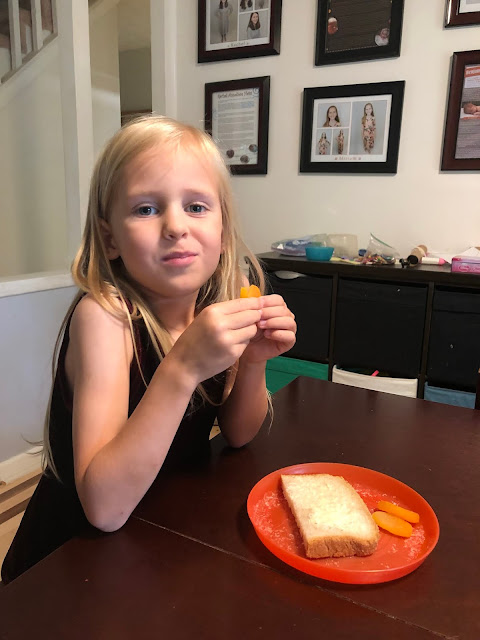 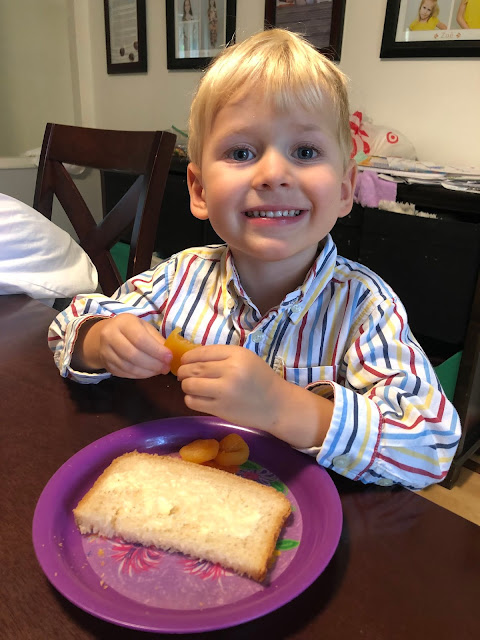