Zoë and Benjamin were both mighty confused to wake up in their beds this morning. Apparently they had no recollection of Andrew rousing them to make them march inside the house carrying their pillows. When the kids were confusedly and excitedly telling me about how they "woke up in [their] beds!" Alexander excitedly proclaimed, "SO DID I!" (which honestly shouldn't have been very surprising for him considering that's where he went to sleep initially).

I went out and collected the snake shed this morning (after cleaning out the gutter because we had a huge rainstorm yesterday afternoon and the gutter got a bit clogged with debris). It was definitely still very fresh, so I don't know when that snake managed to wriggle free from its (old) epidermis without anyone noticing. Andrew's been out working on the back deck the past couple of days.

Side story: We only bought a few boards because lumber is super expensive right now (and we have a few other home improvement projects going on besides the deck). But also I was adamant that we couldn't really put off replacing the worst of our boards. Andrew thought I was being overly anxious about the deck...until he went around testing boards to see which lucky few get to be replaced and...plunged through the deck up to his knee! (Looks like he found a board that desperately needed replacing!) He's a little scratched up but otherwise fine.

The snake shed (43 inches) is a little taller than Alexander (~38 inches (he wouldn't stand still so I measured him as he was playing)). By nature the snake shed is also a little taller than the snake that shed it (since the skin stretches as the snake wriggles free and because the shed includes skin from both sides of each scale). According to a few sources I've read, a snake shed is usually 20 to 30% larger than the actual snake, so 33–36 inches is its approximate total length (assuming I did my math correctly, which is...an assumption). That's still about as tall as Alexander! 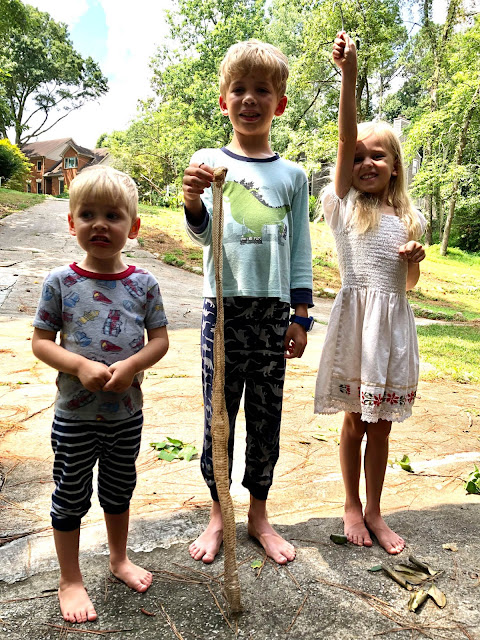 Zoë has a hook from a broken hanger, which she's been carrying around all day, pretending it's all sorts of things (a key, a hook hand, a magic wand, etc)...in case you were wondering what she's holding up in the air in every single picture. 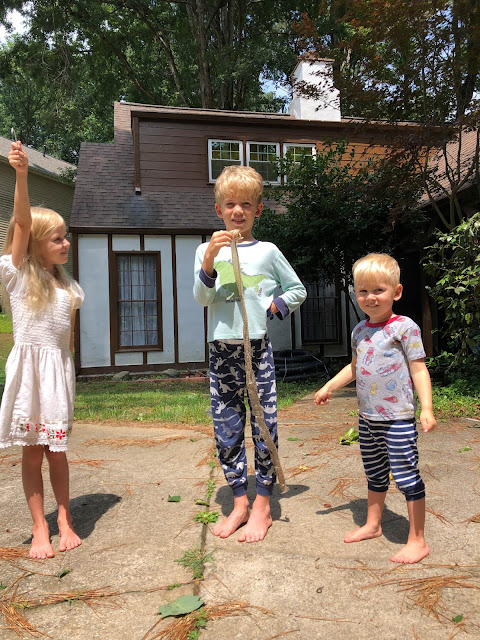 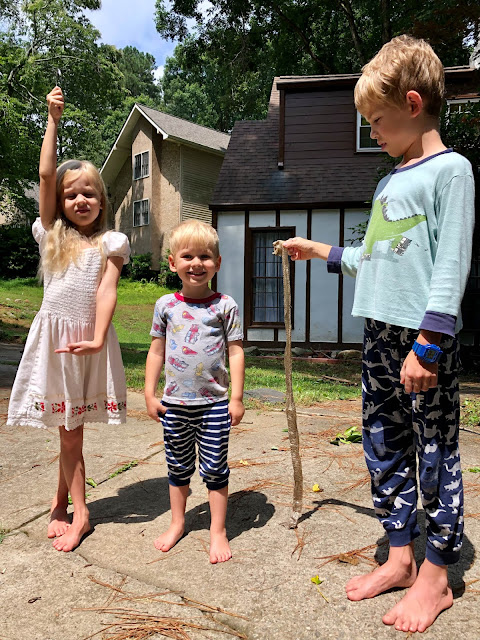 Here's a view of the snake's head: 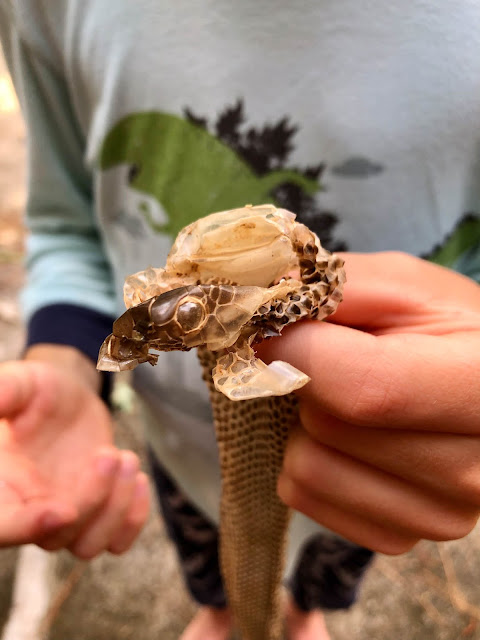 Again, I'm pretty sure this is just a black rat snake or something like that, given how dark of pigment the skin has (snakes shed inside out so you have to check the inside of the shed to get the best feel for the pigment; I suppose we could try right-side-outing this skin...but that sounds like a lot of delicate, finicky work). So I'm sure it's perfectly harmless. I mean, the shed itself is obviously harmless (just wash your hands, children). I mean that the snake it came from is a helpful, rodent-hunting, non-venomous kind of snake.

Copperheads average between 24 and 36 inches while black snakes typically grow to be between 42 and 72 inches. This would make our snake a little small (so likely still a juvenile), but I would prefer to imagine it as a very small black rat snake than as a very large copperhead (thank you, very much).

Here's a picture Andrew took of the deck yesterday (probably while the snake was busy shedding its skin right behind him...dun, dun, dun!): 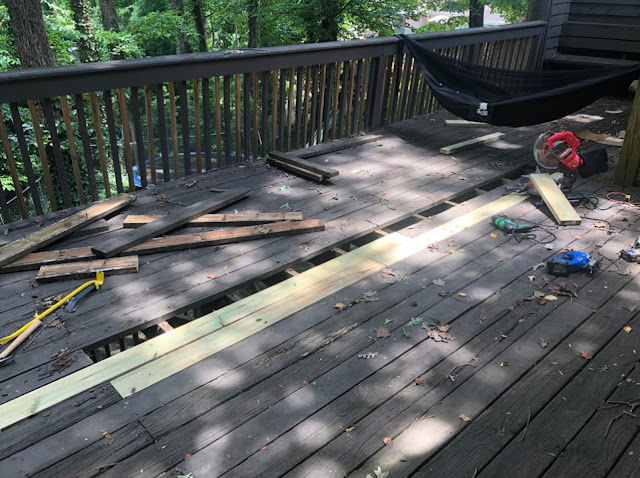