I took the kids to the pool for nearly four hours today! We went "early" and had a picnic lunch because Alexander doesn't like it when the lifeguard is at the pool because the lifeguard calls for "adult swim" the last fifteen minutes of every hour and he doesn't like to be forced out of the pool. But really the lifeguards are all really nice. We especially like Teaghan, who just happened to be working today.
It was hot out and instead of just chilling on her break like she usually does, Teaghan decided to delight the children (my four (Rachel didn't come) and three from another family (the only other family) there) by lining them up on the side of the pool and doing spectacularly splashy cannonballs and can-openers off the diving board, soaking all the kids over and over again. They thought it was the best thing ever!
I hope if they remember anything from this summer years from now, it's Teaghan the Lifeguard splashing them all during adult swim. (It would be cool if they remember other things, too, but I think this is a memory that needs to be locked away in their brains).
And then when adult swim was over and Teaghan was climbing back onto her lifeguard chair, a bunch of little kids climbed up on the diving blocks, ready for her to whistle and call for "kid swim," so she teased them by raising the whistle to her lips and lowering it several times. Benjamin had a little "false start" and fell into the pool before she blew her whistle (and climbed back out as quickly as he could, because he's no rule-breaker!). When she finally blew her whistle the kids all screamed for joy and leaped into the pool together and it was utterly adorable.
So, again, I really hope they've all committed Teaghan the Lifeguard to memory.
*****
I watched a talk by Joyce Sidman the other day (as part of the Books for Young Readers Symposium at BYU (and my children may have listened in, too)) and it was so wonderful. She told a story about finding a little common grey treefrog on her garden hose and how she became so enamored with it that she didn't want to disturb it, so she didn't water her garden that day. And then she just...became obsessed with these noisy little frogs (who I can hear chorusing outside my windows as we speak (in fact, I took a picture of one climbing up our (very dirty) window this evening!)). She learned everything she could about them and began spending her mornings hunting for them with her camera. 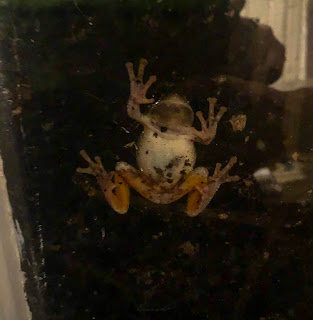 She said that sometimes she would find several frogs, sometimes she would find a few, sometimes she would only see one. Other times she wouldn't find any frogs at all, but that didn't matter!
"Because look at what I did find!" she said, sharing some beautiful pictures of flowers and dragonflies and all the other wonderful things she discovered while on her morning frog-hunting adventures.
The kids and I talked about how because she was out in the world, looking for beautiful things, she found beautiful things (even if they weren't the exact things she was looking for). I think that's such an important life lesson. If you go about doing good things, you're going to achieve some goodness (even if you don't quite achieve what you set out to do). If you go about trying to find good things, you're going to find goodness (even if you don't quite find what you set out for).
The important thing is to have a goal in mind, to be working toward goodness, to be looking for goodness.
(Joyce Sidman also ended up writing a book about those frogs called "Dear Treefrog," but I don't know how many of my kids want to be authors when they grow up (I want to be an author when I grow up, but still haven't figured out how), so this ending felt secondary to our purposes. But, still—look at this good thing that came out of her curiosity about a frog!)
*****
Along the lines of seeking for goodness and inevitably finding some (not that you won't run into bad things on your morning frog-finding adventures, because I'm sure there were times she ran into dog poop or got a tick on her or whatever...but—by, golly!—she chose to focus on the flowers and the cloud formations and the curiosity and wonder of the world), I've had the chorus of the Avett Brothers song "The Weight of Lies" stuck in my head the past little while. Sometimes I change the word "lies" to "life" in my head because I don't always think it's lies people (I'm people) want to run from, but just the overwhelmingness that is...life. You know?
Not that I personally feel like running right now. But I'm not altogether unfamiliar with the feeling.
Anyway, I was talking to my mom this evening and told her about this song, so I thought I'd put the words here:
The weight of lies will bring you down
And follow you to every town 'cause
Nothing happens here that doesn't happen there
When you run make sure you run
To something and not away from 'cause
Lies don't need an aeroplane to chase you down
I just love the lines "nothing happens here that doesn't happen there" and the idea of being sure to be running to something (trying to find some goodness) rather than away from something. Because life...is just always going to be there.
*****
I'm not sure if any of this makes me sound like an optimist or pessimist. Really, I like to consider myself a realist. I do my best to be optimistic about things but have way too much anxiety about, well, everything to actually be considered one. I wouldn't say I'm pessimistic, though. I just...try to keep things real.
For example, I failed my glucose test this week (royally, as one does).
In the past I've been bummed about this moment. But I really wasn't upset about it at all this time around (that does not mean I won't ever get angry about food; I am pregnant, after all). Instead when the nurse told me I failed I was like, "Glad we're on the same page now."
Like, I already knew I was going to fail. There were no surprises here. I have failed more glucose tests than I've passed (for the record, I have passed two glucose tests and have failed six of them (two with Benjamin and two with Zoë, but only one each for Alexander and this baby because...I I got smart and learned that I could request to not take the three-hour test. Since I've failed it twice (and it's three times as miserable as the one-hour test), I figure I'm not likely to ever pass it).
I've been really good so far with diet and exercise. I think. I mean, I haven't been testing my blood sugar, but I've been doing things like eating fried zucchini and yellow squash while everyone else eats pizza and I've been militant about post-prandial exercise. So I just have, like, 19 weeks left of this.
Not that I eat terribly unhealthily when I'm not pregnant (my father-in-law swears I'm a hippie because I eat vegetables), but I do enjoy ice cream every now and again. As one does.
Anyway, I was talking with my family about my glucose test this week (I had to check on why we were talking about that—it was because of Rachel so kindly making a chocolate cake for her birthday so that I wouldn't feel tempted to eat any) and Patrick said, "You don't have gestational diabetes this pregnancy, do you?!?!?"