Ups and Downs from Today

This morning I watched a cool video about how turmeric can be used as a pH indicator. I've considered trying to use red cabbage to do pH testing, but it seems like a more involved project than I'm ever quite ready to do (at least lately). You have to boil the cabbage and strain the cabbage and have the cabbage (we don't usually have cabbage). But we do have turmeric! And this looked fairly easy!

So we got our supplies and went to work. We mixed up some turmeric, which I just learned today has two r's in it! I have always said it TOO-mer-ic (or even TYU-mer-ic) and had just...never paid much attention to the label, I guess. 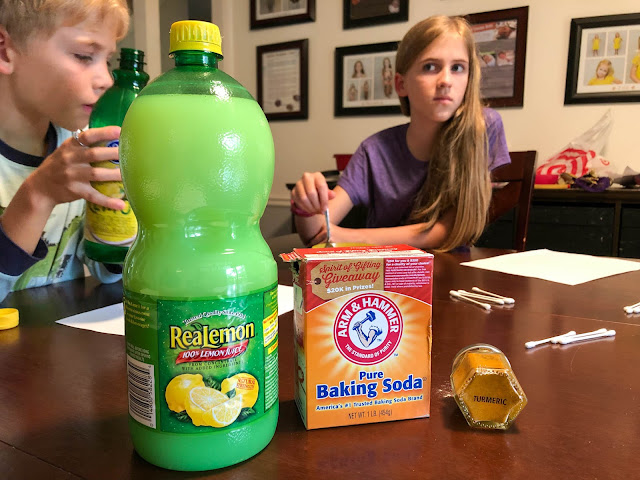 But there's definitely an /r/ in the first syllable. I looked up how to say it in the morning when I saw that /r/ and my initial research told me that it should be pronounced TUR-mer-ic, but now I'm not so sure. It's a word that's been borrowed and botched and then re-borrowed and re-botched, so...I think it's one of those things you can pronounce however you'd like at this point.

(For the record, I grew up saying "sherbert.")

Anyway, we tried to replicate the project in this video. And while the experiment more or less worked...the video was a bit more time-lapse-y than it let on. It worked. It just worked...slowly.

Basically, you mix some turmeric into water and paint that on your paper. Then you mix some baking soda in some water (to make a basic solution) and paint on your paper with that, which should turn the turmeric-stained paper from yellow to red. If you do a lemon juice wash over what you drew, it will disappear (but, for us, this was only a temporary disappearance).

So we did our mixing and washed our papers with turmeric "paint"... 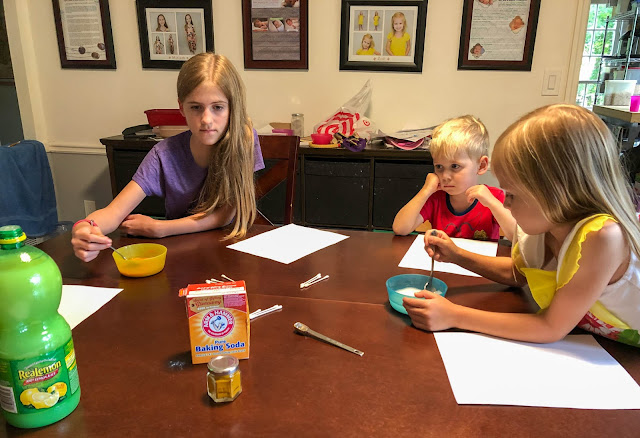 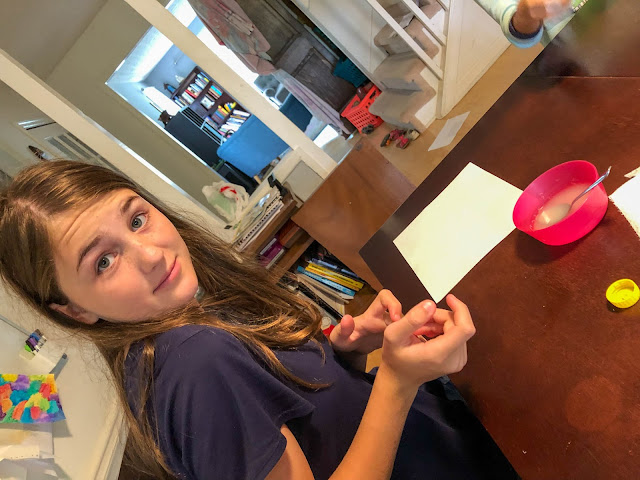 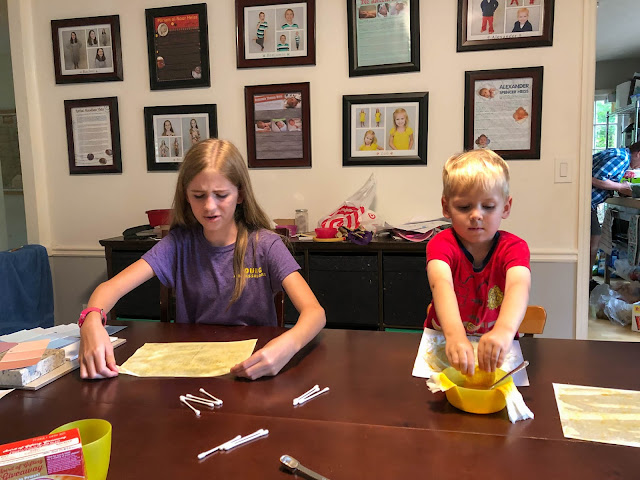 Benjamin finished off the dregs of this bottle of lemon juice before we opened a new one (and now he's rinsed it out and has been using it as a "water bottle" all day, giving Andrew quite a scare when he came home from the hardware store (Benjamin did this once in Spanish Fork with an empty mustard bottle, which was somehow even more jarring than the lemon juice)). 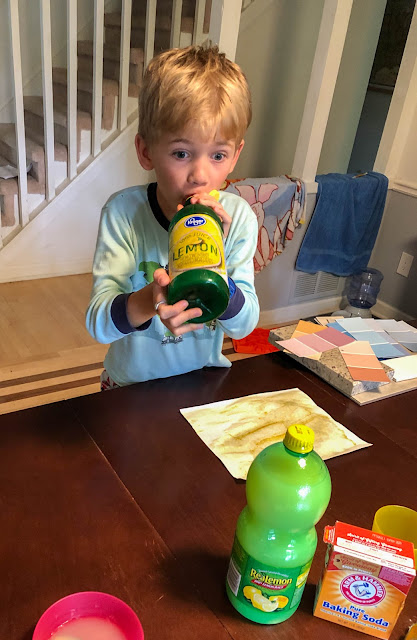 And then we tried drawing on our papers to see what would happen. I thought the reaction would be pretty fast, so I had half the kids draw on their papers with our basic solution (baking soda) and the other half with our acidic solution (lemon juice), thinking they would make spectacular observations between the two reactions. But...instead it was all very underwhelming.
Rachel and Benjamin were working with lemon juice: 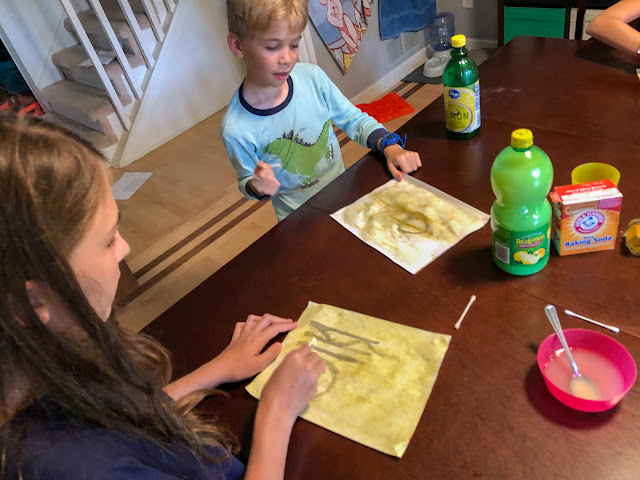 And you can see the results are...not great. 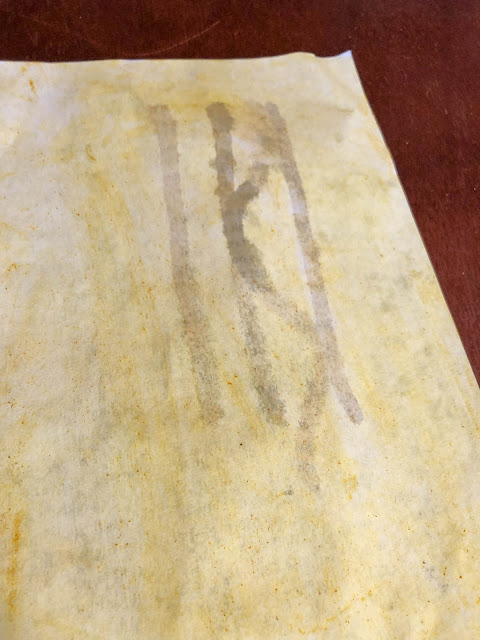 So that was a bummer.
We moved on to math.
While I was going over the joys of regrouping with Zoë, Rachel walked in to show me that the papers had dried and the basic solution had really turned the turmeric an impressive red. 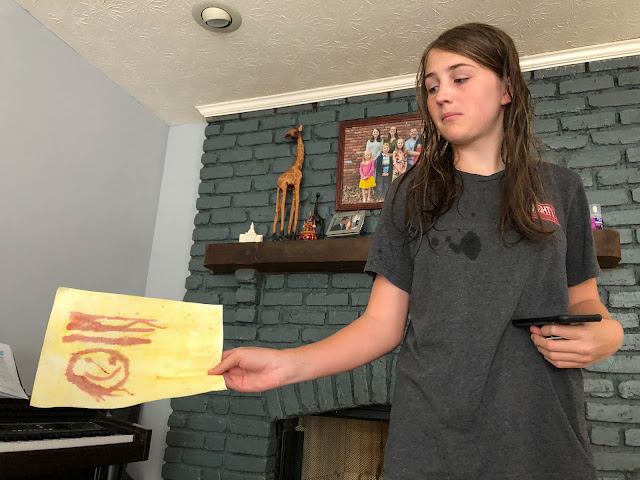 So we went back to the table for a little more experimentation, this time knowing that we'd have to wait a while to see results. 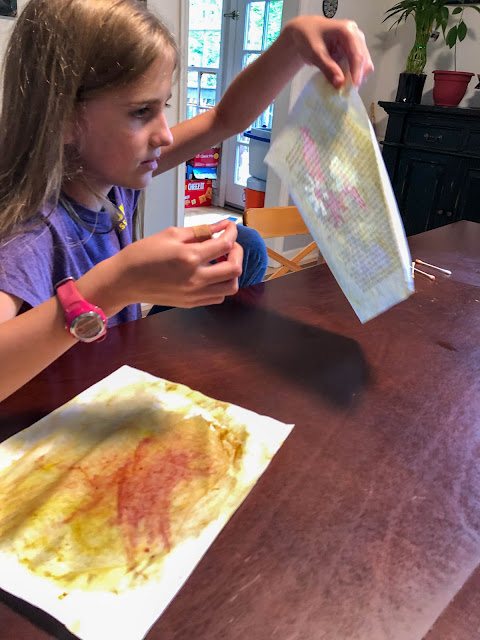 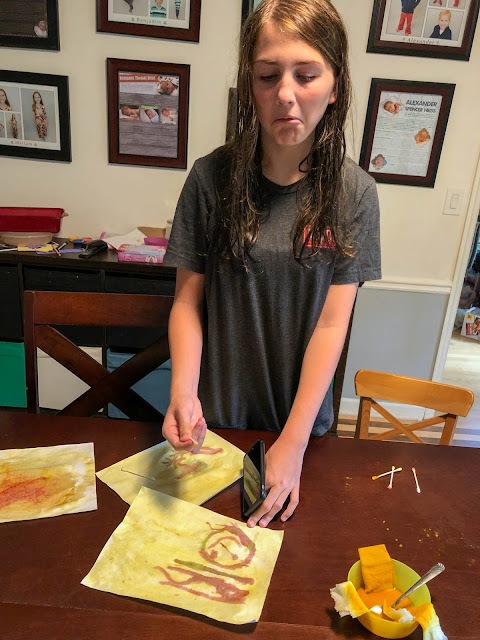 It was an interesting experiment (that produced some rather creepy artwork). 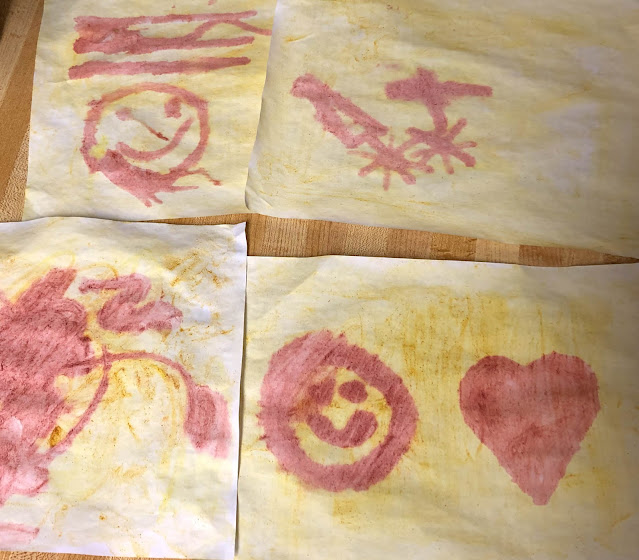 We'll have to try the cabbage thing later because I think it's supposed to change colour for both bases and acids (and perhaps even shows the strength of any given solution (ie. it will turn redder for more acidic things and bluer (greener?) for more basic things), while I am not sure the turmeric experiment would reveal that).

But we don't have any regrets. Except, perhaps, that our house smells very turmericky now.

And while we're making linguistic confessions (language learning is a lifelong process, even for native speakers), I just learned the other day that unwieldy is...unwieldy. I always thought it was un-wield-ly (unwieldly) and I'm not alone in that (it's sometimes listed as a nonstandard form of the word).

I'm glad it took me 36 years to figure that one out.

I most recently saw it in writing when I got a comment from an professor I'm currently co-authoring an academic paper with. She said my phrasing was "unwieldy" and that she would like it to sound "more like speech and less like academic writing" but has also told me that I need to ensure that all my writing ends up "reading" like "academic discourse" and isn't too conversational. So I just can't win.

I would be lying if I said this project hasn't (a) kept me up literally all night at times because of existential dread, (b) had me crying and/or banging my head against the wall, or (c) whining and complaining to long-suffering Andrew.

But it hasn't all been bad. I've learned a lot.

I just wish that part of what I learned hadn't been how incredibly frustrating this process can be.

Honestly, being pregnant probably hasn't helped me keep a level head about everything. Today my mom sent a video about ADHD to our family group chat and I was bawling by the end of it. It's a parody. It's supposed to be funny. I know that.

It was a little ridiculous.

But no less ridiculous than how mad I got when we arrived at the pool and discovered that the children had dutifully gotten into their swimming gear and loaded themselves and all the pool stuff into the van...except for the green pool bag.

Like, I get that it wasn't entirely their fault and that *I* could have grabbed the green pool bag. But when I came downstairs from putting on my swimsuit (after helping Alexander into his and coaching Zoë on tying her swimsuit bottoms (because it had been a few days since she last tried tying anything and the bunny ears part was giving her trouble) and so forth...everything seemed to be gathered up. The pool toys were gone. The towels were gone. The children were gone.

I went out to the van, asked if we had everything, did a cursory check to make sure everyone was buckled ("Ooops! You missed one side of Alexander's buckle! Let's get that done up before we go!) and we were off.

It wasn't until I had pulled into a parking spot that Rachel looked around and asked if anyone had grabbed the green pool bag.

"What's even in there?" Benjamin shrugged. "Mom's sunglasses? She can live without them today. It's cloudy."

So, our ten-minute drive to the pool turned into a half-hour drive to the pool (because we had to go back home to get the pool key and then drive back to the pool) and it was not my finest half hour (okay, really only twenty minutes because I wasn't in a bad mood for the first third of the drive, see?).

The kids got a lovely lecture about "mental load" and how it's nice that they try to unburden some of that for me by gathering up the pool things but really I can never let go of my mental load, can I? I have to always check to make sure that everything gets done because no one has a mental checklist like Mommy's. Even when I print out a checklist somehow things still get left behind unless I hand check everything. Like...who forgets to pack pants for a trip?!

"Don't interrupt me when I'm ranting!" I think I said back to her.

See? Not my finest moment(s).

Luckily...or not...we arrived at the pool just in time for the lifeguard to blow her whistle and declare that it was "adult swim." She apologized to the kids. But really it worked out fine for everyone because I got to hop in the pool for my swim time (I've been using adult swim to get in some solid laps) and by the time adult swim was over, I wasn't mad anymore and could actually have fun with my kids again. And Rachel had everyone sunscreened and ready to go (in spite of the clouds...which then unleashed a downpour on us...which later turned into a thunderstorm (but not before we got a good swim in)).

* Correction: She was nine.

And it's really totally forgivable. These things happen.

Let's not forget that one time when we were taking a girls' trip down to Utah from Alberta and Josie (who must have been 4 or 5) pushed my mom's suitcase under the credenza-type-thing we had in the living room and so it never made it into the vehicle, a fact which wasn't discovered this until we arrived in Utah. My mom wasn't too happy about that discovery (which just goes to show that a mom really can't let go of her mental load). I think we went to Target (and the Distribution Center) and she had to buy a week-long wardrobe for both herself and Josie.

Target seemed like a very magical place to me. Our small town had nothing like that (and I didn't make it into the city to go shopping very often (and even then I feel like our stores were smaller)).