Independence Day and our 2-year Georgia-versary

Well, we've done it! We've lived in Georgia for two full years, a time period which feels at once longer and shorter than it sounds. We still feel very new here—because we haven't done much exploring and hardly know our ward at all (thanks to splitting wards, and then switching stakes, and then suspending church services for COVID)—but we also feel like we've been stuck in this house for a long time.

We moved in on July 3—two years ago now—so it's been nice to mark the day on July 4 the past couple of years. We didn't do very much to mark the day (everything feels a little unexciting lately), but at church the kids had a patriotic primary lesson and Zoë came over to me (because we're still Zooming in over here, much to everyone else's very obvious annoyance (I think we'll be cut off in the next couple of weeks and then...I don't know...we'll go to sacrament meeting and then go home? Like, am I that crazy to want my kids to be vaccinated before we jump into things with both feet again? Evidently...yes)...anyway, when the music leader asked what sorts of fun things the kids were doing for the holiday, Zoë came over to me and said, "Mom, today's a holiday?"

"What are we doing?" she asked.

It's only fair. We didn't do much for Canada Day, either.

"We can put up some decorations!" she suggested.

I don't decorate for many holidays.

I wonder why holidays so often feel unexciting over here...

Anyway, Andrew made hot dogs and corn on the cob for dinner last night, which Alexander thought was hilarious because he couldn't remember what on-the-cob meant (we eat corn on the cob about as often as we decorate for holidays around here). He repeated, "Corn on the cob?" and then howled with laughter. But when dinner was ready and he saw what was meant by that he knew he definitely wanted some so he said, "Please pass the corn on the...web."

"I couldn't remember the word!" he told my parents when we told them the story via video call this evening. Oh, but we didn't call them until after we'd gone for our evening walk, a walk which put Alexander to sleep.

He was sick earlier in the week, and then felt better, but then on Friday he was feverish again, and then he's been feeling better again since mid-day yesterday. But he fell fast asleep on our walk (recuperation is hard work, I guess). He was so fast asleep that he didn't wake up when we pulled into the garage and unbuckled him. And he didn't wake up when I carried him into the house, so I snuggled with him on the couch for a few minutes, but then Andrew carried him up to his bed so that we could play a game (Carcassonne) with the big kids.

Alexander came back downstairs while we were playing and asked for breakfast.

"Yeah. You’ve only been asleep for a little while," Andrew told him. "It’s almost nighttime."

Alexander glanced out the window and noticed that it was still plenty light outside and then gave his dad some serious side-eye.

A little while later Alexander looked out the window and exclaimed, "What? Whoa! It’s turning nighttime! The sun was up and now it’s going down! This was the shortest day!!"

His little nap was probably not a bad thing, because while Benjamin was taking out the recycling, Mr. Paul approached him to let him know that he'd be setting fireworks off again this year, so we headed up the street at the appropriate time to enjoy the show.

Zoë insisted on bringing her baby doll (and Alexander brought Spot, his owl), so Andrew's getting a little practice having six kids in: 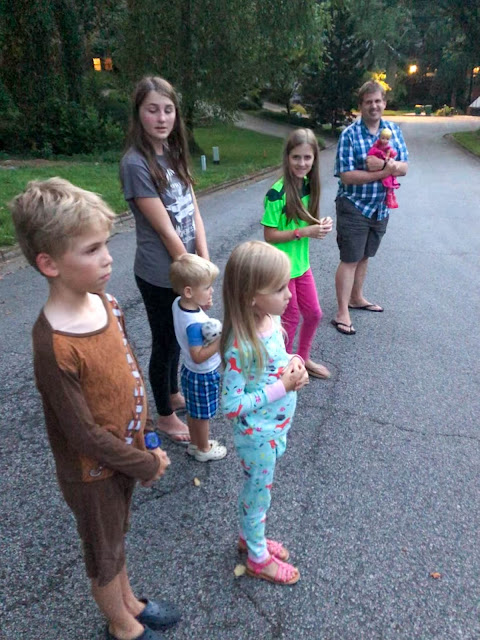 Eventually I took both toys and left them at the top of our driveway to enjoy the show so the kids could enjoy other things and so Andrew could hold Alexander: 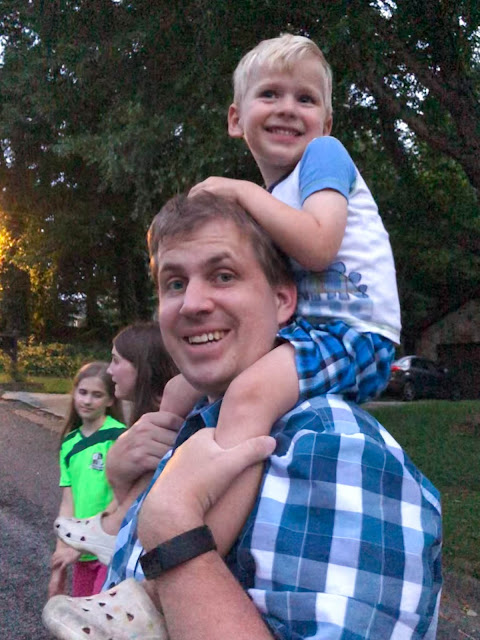 Zoë and Benjamin had fun hunting for these little parachutes: 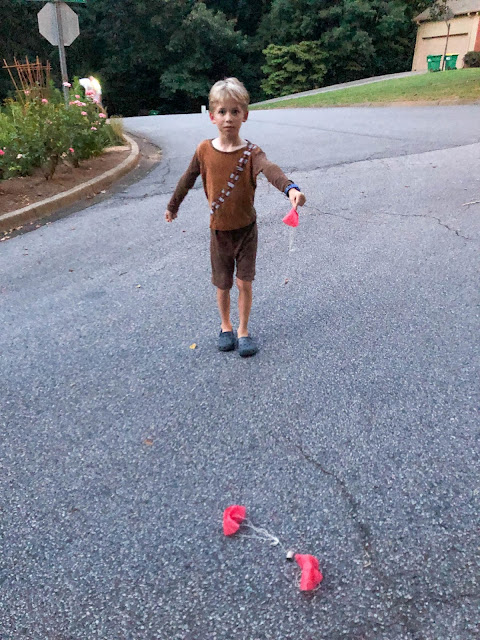 Clearly I had not yet put the doll at the top of our driveway when I took this picture: 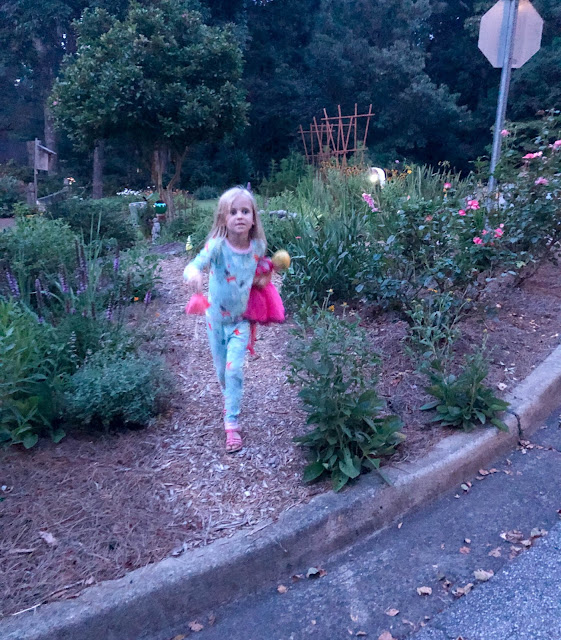 And all the kids had fun with the sparklers (they had a lot of sparklers): 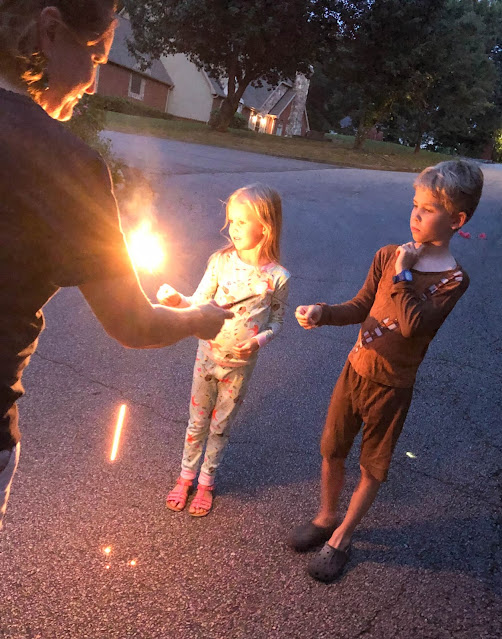 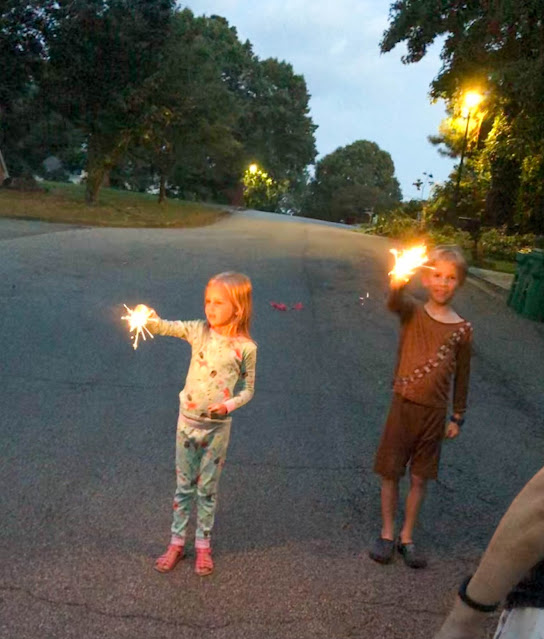 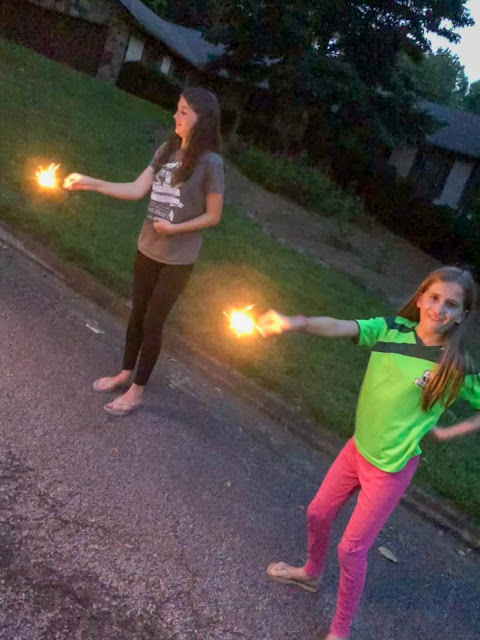 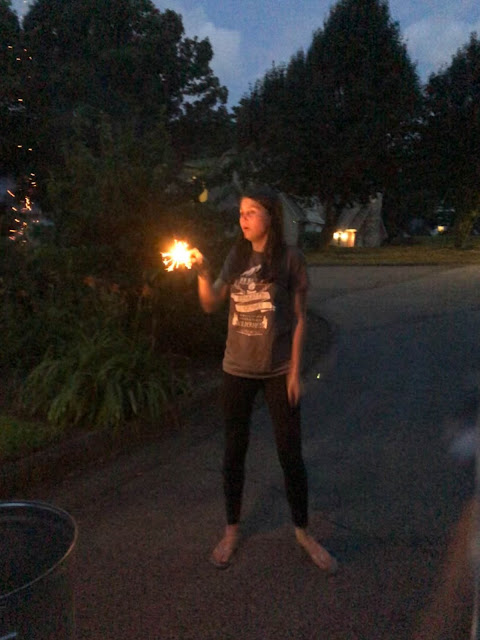 Most of my pictures are of Zoë and Alexander because I was spending most of my time fretting over their sparkler-usage (while the big kids I mostly expect to make good choices without my hovering over them (except, perhaps, for Benjamin, who wasn't much interested in sparklers this year and was having too much fun bouncing around so he could see all the aerials being set off around the neighbourhood)). 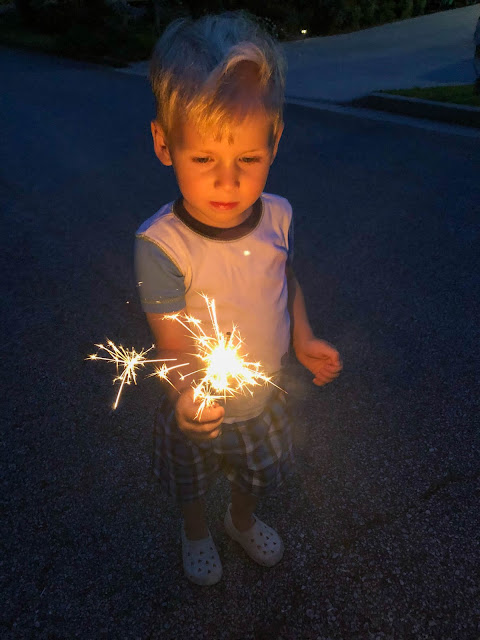 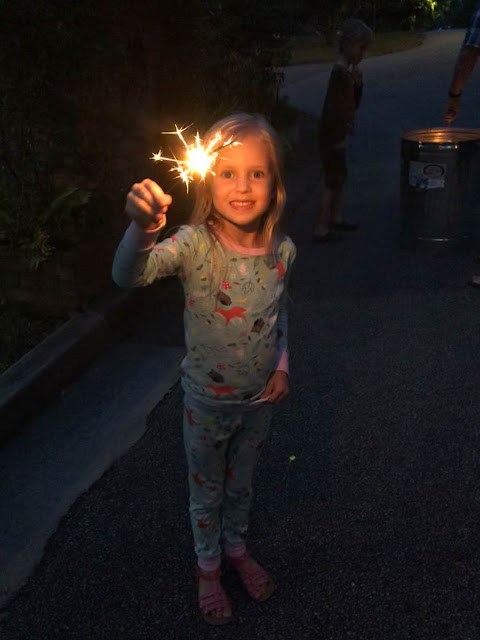 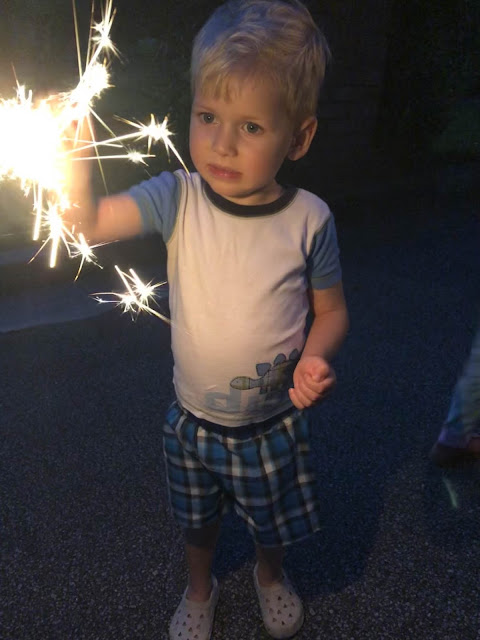 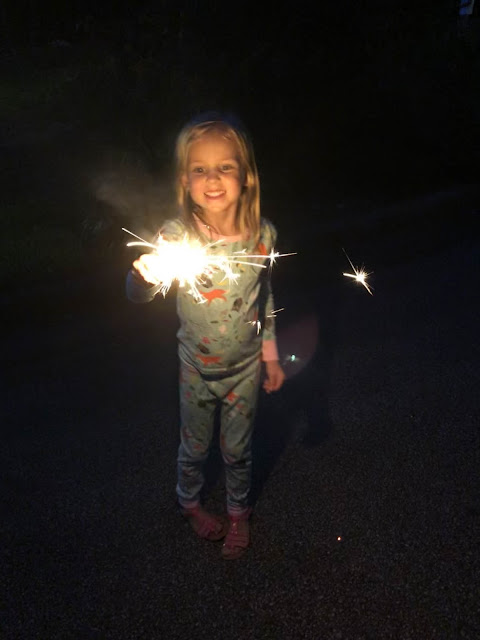 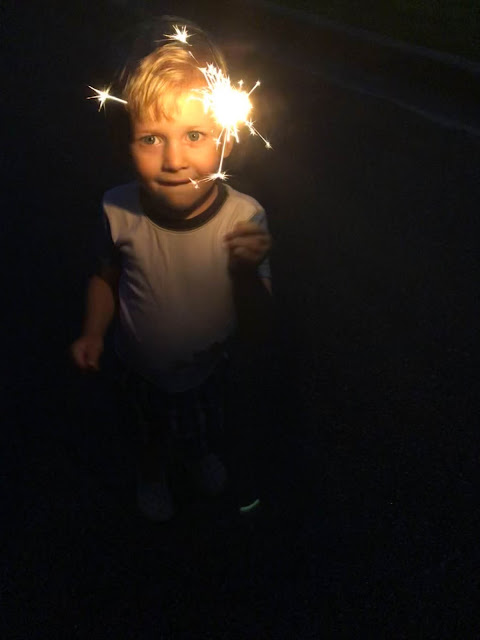 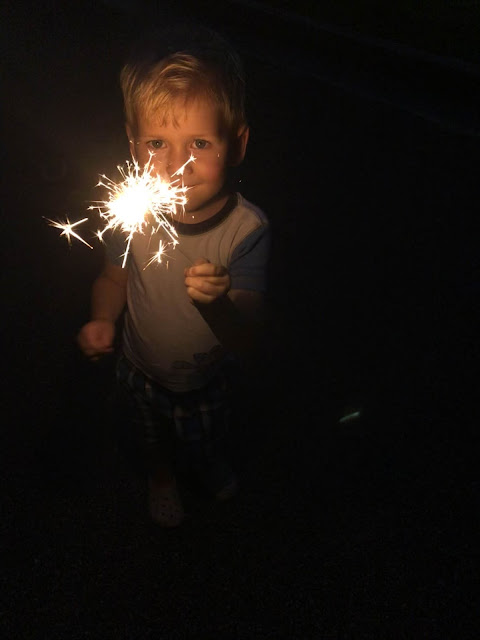 Zoë and Alexander both enjoyed the "whistling" fireworks and laughed and laughed when they were set off. But those were only Zoë's second-favourite fireworks—her first favourite were the silent ones.

Zoë was also very excited to see the stars come out (we were out well past ten o'clock and she doesn't normally get to stay out that late). She located the Big Dipper in the sky all by herself, which was pretty impressive. It was nestled in a lovely little break in the tree line.

She then wanted to know where the Little Dipper was, but we couldn't see that because of all the trees.

"The North Star—Polaris—is on the handle of the Little Dipper," Benjamin informed everyone. "People would follow the North Star when they escaped from slavery so they could head north toward freedom!"

"But...how?" I asked. "There are so many trees down here! I don't see how it would even be possible to use the stars for navigation!"

"Mom," Benjamin sighed. "They would also use moss to find their direction. So when they could see the sky they would use the stars and when there were too many trees to see the sky they'd just use the trees."

Oh, I was reminded of one more story (because I linked to a National Parks link)...

Benjamin was called on during primary to choose a trivia question about the United States. Some of the questions were kind of tricky (like, "Our national bird is the bald eagle, but Benjamin Franklin famously put forward a different bird. What bird was it?"—a turkey, by the way), but Benjamin's question (my Benjamin, not Benjamin Franklin) was merely an opinion question: "What is the favourite place you've been to in the United States?"

He's my child, so naturally the idea of picking a favourite stumped him. I mean, aren't a lot of places pretty great? I could tell he was having a hard time making up his mind, so I started throwing out ideas for him (all the better to...clutter his mind?).

"The beach," I suggested. "Oh—how about a National Park? Capitol Reef..."

"What?" the teacher asked.

"I...we're having trouble understanding...cutting out a little on our end, maybe..."

I raised my hand to my mouth, and whispered, "Paaaaarks," to him putting my fingers in my mouth to show him that he needed to open his mouth wider for that vowel to come out properly. Like this (only I typically use three fingers because if you over-exaggerate in practice then when you're feeling timid you'll have a better chance of hitting that two-finger mark, right?):

We didn't realize how poorly he pronounced the word 'park' before this moment! I suppose it would have been fine if we had been in New York, but we live in the south!

I'm sure that quirk of his will resolve before he gets to that point (he still says a few goofy things, like 'olpen' instead of 'open,' but...language is super tricky, so I get it).