Swimming in the rain

The kids and I went swimming this afternoon, while Andrew stayed home and repaired a section of the back deck that was stressing me out; lucky for us, he doesn't particularly love going to the pool and, quoting a few productivity gurus, gushed about enjoying working with his hands since he spends so much time working with his mind, so that made me feel less like he was getting the short end of the stick.
Swimming was interesting because it was pouring rain and it's always nice to switch things up a bit, I guess. I wanted to take a nice picture of the kids enjoying themselves but...they wouldn't stop enjoying themselves long enough for me to get a decent picture. So we'll have to do that later. 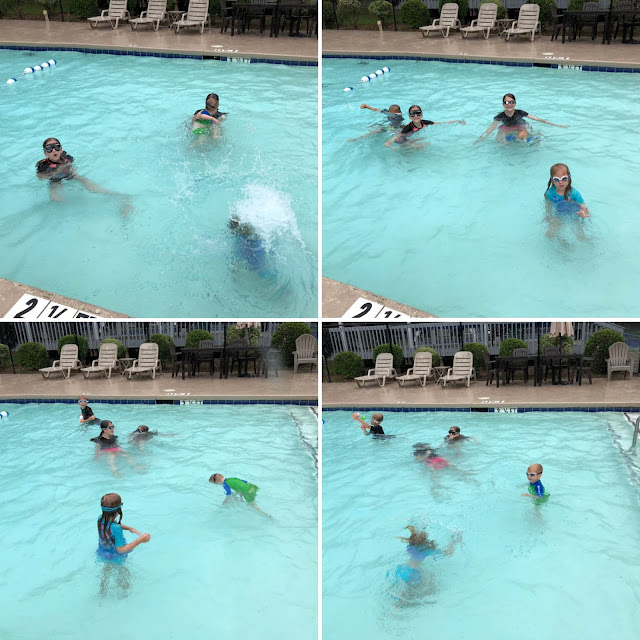 Alexander has made great progress with his swimming. He can do a lovely glide and he tries to do his "big arms" for the front crawl. He loves diving down to touch the bottom of the pool. And this all works really well for him when he's in the shallow area because he can just stand up and breathe when he needs to.
When we head out into deeper waters, however, it becomes a real problem. He can swim on his front, he can float on his front, but he just can't...breathe (which is...kind of important). He can flip from his front onto his back but has trouble getting his face above water, so we're working on that. He can hold a back float once I help him get into position. He just can't quite get into position by himself. But I have a feeling that by the end of the summer he'll be able to!
We enjoyed the pool in the rain for about an hour before it started thundering, and then we called it quits and went home, which was fine because we still had some schoolwork to finish up.
Posted by Nancy at 12:32 AM