Castles and Knights (and snakes)

Andrew remembers first playing Carcassonne at my cousin Heather's house in Alberta (I think technically we had gone to visit Daelene's house). I vaguely remember this (I remember more heading out to visit the lake they had in their subdivision).

I remember first playing Settlers of Catan at the Masons' apartment in Cairo. Being the helpful person that I am, I shuffled the deck (word of advice: don't do that). We both learned to really enjoy Settlers (something Andrew may have already known about himself).

We have had Settlers for quite some time now and while I still enjoy playing it, I've found that my tolerance for "long games" has been steadily decreasing with each child I have. Like...fun game...but literally you want me to sit here for 1 to 2 hours, thinking about this game while simultaneously keeping the small ones happy? No, thanks.

My patience for such games runs especially thin at the end of the game when it's already clear who the winner is and everyone is just trying to keep them from sealing the deal (thereby prolonging the game (just let it end, people (especially if I've assured the little kids that "we're almost finished" a dozen times already))).

So Andrew got Carcassonne, as a treat.

It's like Settlers, but much less complicated, and it only takes half an hour or so to play out. We've been having a lot of fun with it!

Zoë and Alexander happily draw together while the rest of us play a quick game and everyone stays happy the whole time (until someone loses and then sometimes there are tears). Tonight Zoë and Alexander drew castles because Carcassonne is, to quote Zoë, "definitely based on Medieval times."

Here's the castle she painstakingly drew (Miriam taught her a new way to draw flowers, which was thrilling): 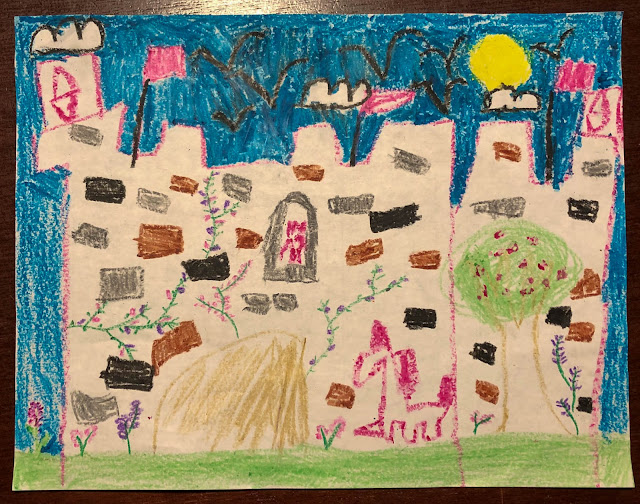 Alexander, of course, had to copy her. And he narrated the whole process. We still find it shockingly adorable that he can actually speak (and that we can understand him so easily). He said things like "knight in shining armour, with a sword and a shield!" All of which are things he couldn't say two months ago (all those /s/ and /sh/ sounds)! That's a big stained glass window above the door to the castle, and there's the sun (which he informed us is just a burning ball of gas) up in the sky, and a moat in front of the castle (with a little red wall in front of it so the humans don't fall in). 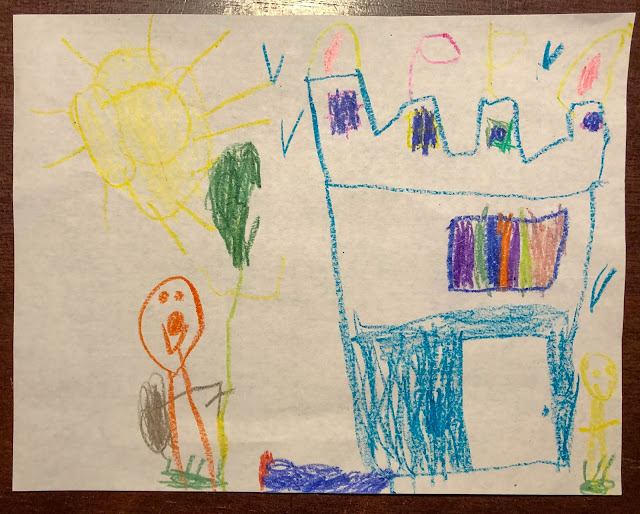 When he was finished with his first attempt he went ahead and drew another castle because Zoë was still working on hers: 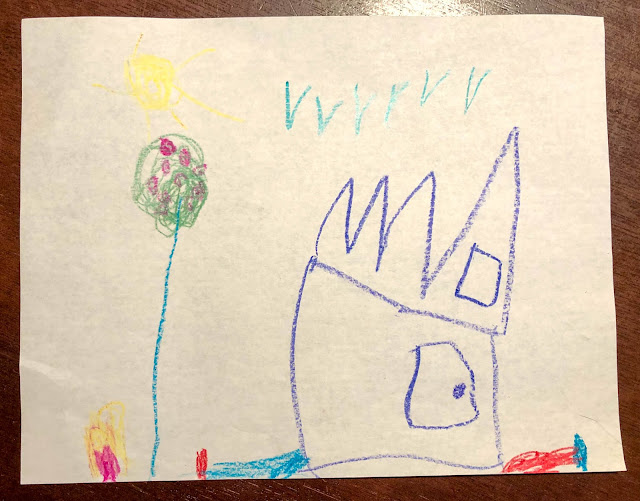 He also drew this unicorn (note that she has a unicorn on her paper, too): 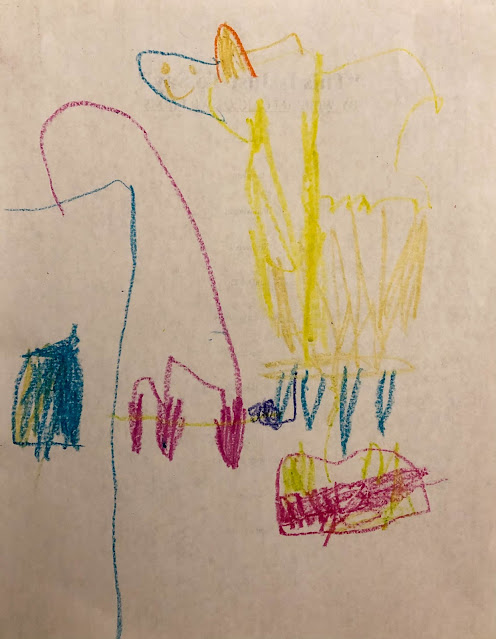 And, as a bonus feature, enjoy this picture of "robots exercising": 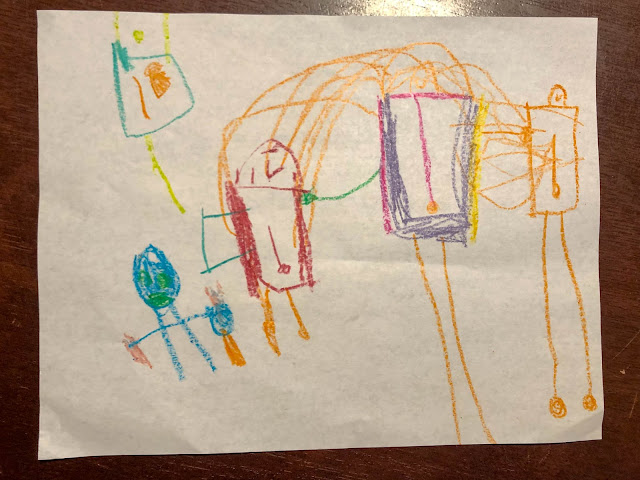 He drew several other pictures this evening, but they decreased in quality as he went on. Still, we're impressed with both his artistic skills and creativity...as well as his sweetness and sense of humour. He was too adorable this evening.

I've always said that three-year-olds are the worst, but I'm not sure that's the case with Alexander.

At one point he held up a crayon he was using that had snapped in half, being held together just by the paper wrapper.

"Mommy," he said sadly, holding up the crayon. "This crayon is almost broken."

"Oh, no!" I said sympathetically.

"Not 'oh, no!'" Alexander said, turning his frown into the biggest smile. "This way Zoë and me can both use it!"

Hopefully this won't mean and entire bin of broken crayons is in our future (we did explain that whole crayons are typically more fun to use (as is the case with sidewalk chalk), so hopefully that idea sunk deep into his mind).

The kids have been sleeping on on the deck for the past week, taking turns in the hammock, with everyone else in the tent. Alexander always comes in to sleep before the night is far spent (he likes his bed), but the rest of the kids have mostly made it out there.

Tonight, however, Andrew had to go fetch the kids and tell them to come sleep inside because he was feeling too anxious about having them out there.

Usually it's my job to feel anxious, but the tent has been set up right outside the door and all the kids are capable of doing things like zipping and unzipping tents and opening and closing doors, so it hasn't been worrying me quite as much as it has in the past.

That is until Andrew was out working on the deck this afternoon, replacing rotting boards, and he spotted what appeared to be a rather recent snake shed (we could tell because the skin was still dark (they lose their pigmentation after a while)). And then I spotted that my children who are all capable of doing things like zipping and unzipping tents had left the tent partially unzipped.

They took a fan in there because it's too hot to sleep without one (even outside) and when they closed the tent up this morning they left a few inches open on either side of the cord. So I made Andrew go in and look for a snake. He didn't find one.

But then he was so skittish about having the kids sleep out there.

"Is this what you feel like all the time?" he asked. "Like, what if there's a snake in there? What if it bites one of them? What if it wraps around their neck and chokes them to death? What if..."

"Okay, I understand those feelings...but I'm actually not worried about any of those things," I admitted. "I think the snake was probably just that black rat snake we've seen up here before. It left some sheds behind on the overhang before we had that fixed, so now it's chosen this drainpipe as its shedding grounds. It's not venomous. It's a hot night so I don't think it will be looking for a warm body to snuggle up against. It's not a python so it's not going to choke them. I just...don't think it's a huge thing to worry about."

"Then why did you have me check the tent?!"

"But what if they're not fine."

The kids came in without a fight (only Zoë and Benjamin were out there, anyway, because Rachel and Miriam have a stake activity (outside...) that they have to leave for at like 7:00 in the morning so they elected to sleep in their own beds) and now, perhaps, Andrew will be able to sleep soundly.