We had just settled down for a game of Carcassonne this evening when Alexander came slumping down the stairs.
"My thing is ruined," he sighed.
Everyone around the table offered words of concern and pumped Alexander to share more details...
"Oh, no! That's too bad!"
"What thing?"
"What happened?"
...everyone except Benjamin, who muttered, "It's not like it's a big deal."
"Whoa...what?" Andrew asked. "What happened? What did you do?"
Benjamin played stupid. He put on a quizzical face, shrugged his shoulders, and said, "I dunno! He hasn't even told us what happened!"
"And yet you seem to know that it's not a big deal. Why?"
"I don't know. I just...it's probably not a big deal."
"Someone smashed my fairyland!" Alexander sobbed, revealing his ruined creation.
He'd worked hard all afternoon turning an egg carton into a magical fairyland—with volcanoes and hillsides and lakes and mountains. And now all the little egg divots were smashed and each had a little hole poked into it. 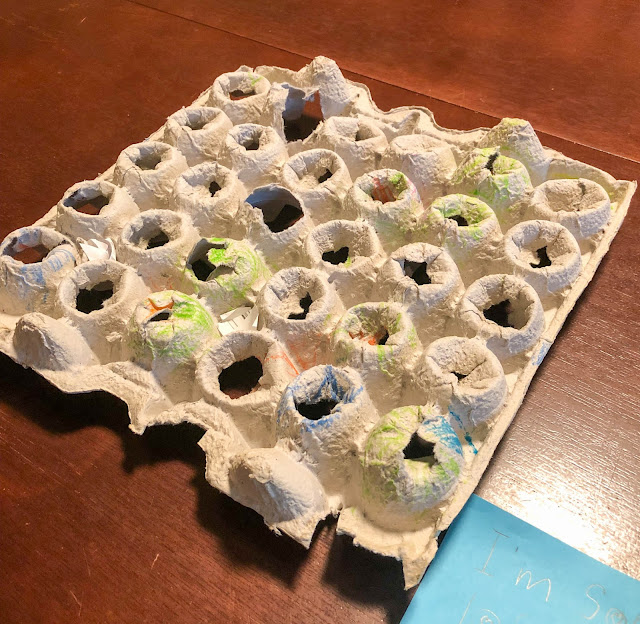 "Benjamin...care to explain?"
"I may have accidentally stepped on it."
"You accidentally stepped on—and put a hole in—each segment?"
"Yes."
"Impossible. If you accidentally stepped on it, three, maybe four, segments would be broken, but then surely you would have realized you had stepped on something not-the-floor and stopped before you ruined the entire thing. So what actually happened?"
"And it was in my room!" Alexander pointed out.
"So how did you accidentally smash his creation when it was in his room? You had to go into his room to do it; that seems like a weird place for you to just hang out smashing things."
Interrogation techniques aside, this is more or less the story that we got:
Andrew asked for help clearing and setting the table. Benjamin answered the call.
Because he's a good kid!
Alexander had left his crafting mess out, so Benjamin put away the scissors and the crayons and the glue and the...everything. And then he decided that Alexander had worked so long and hard on his fairy village that he'd probably like to keep it. So instead of putting it into the recycling bin (which is where a lot of his "crafts" end up (don't tell on me)), Benjamin carried it up to Alexander's bedroom.
It was there that the, uh...chaos...side of his brain overwhelmed the logic side.
He's not sure what possessed him. But he broke one of the little mountains and then another and another and another and pretty soon...the entire fairlyland had been flattened.
So he left it up in Alexander's bedroom and returned to finish clearing and setting the table.
We had Benjamin apologize to Alexander, but it wasn't a very heartfelt apology, and then, instead of playing Carcassonne, Benjamin was sent to practice the piano. He finished practicing around the same time our game ended and then we had a lovely discussion about the logic side of his brain and the chaos side of his brain and how he really needs to let the logic side of his brain rule more frequently.
Helping Dad get ready for dinner? Logical brain.
Thoughtfully taking a craft up to Alexander's bedroom for him? Logical brain.
Destroying the craft (without thinking about his brother's feelings) after thoughtfully carrying it up to his bedroom in order to preserve it for him? Chaos brain.
Returning to help set the table like nothing had happened? I mean...I dunno. Logical brain, I guess.
Acting like he had no idea what had occurred even after outing himself with "It's not like a big deal?" Chaos brain.
It all worked out in the end. Miriam got another flat of eggs from the outside fridge to put in the inside fridge (we had omelettes for dinner (mmmm...protein) so the inside egg supply had been depleted, anyway) and Alexander got a fresh egg carton with which to make his fairlyland. 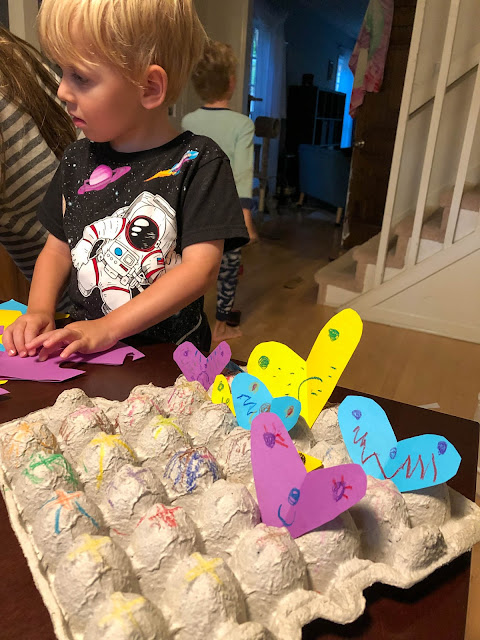 Zoë cut out a whole bunch of hearts for Alexander because she felt so sorry for him and Alexander turned those into "fairyland guards" and even made them each a walkie-talkie that they can use to call him on if Benjamin even thinks about destroying fairyland ever, ever again.
She also wrote a rather impassioned letter to Alexander about how very sorry she is that he lost his "volcano/lake/grassy thing" and how "Ben needs to mean that he is sorry! Ben is in trouble. Ben is not sorry! He smashed the hills that you made! Ben is a smasher!" 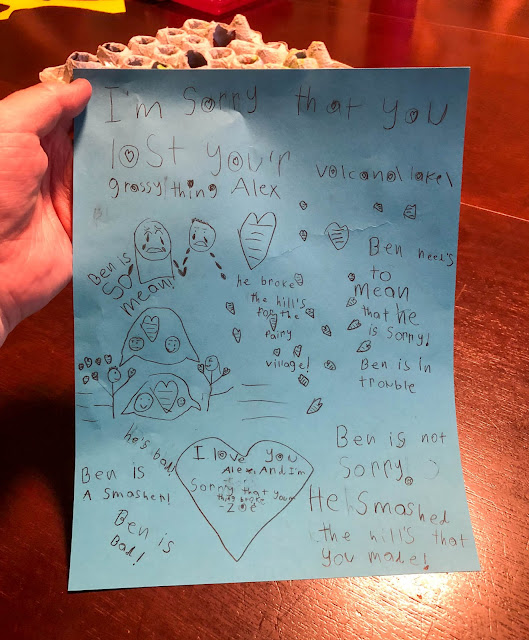 We did have to talk to her about how Ben is not bad; he simply failed to consider the feelings of others before he acted. That's something we all do from time to time and so while what Benjamin did was upsetting and unkind, we can all forgive him (even before he manages to make a heartfelt apology) because that's what will make our own hearts feel happy.
Since we were already gathered around the table, we had our evening devotional there rather than in one of the sitting rooms.
Side note: great rooms are great and all, but having a house with an "old fashioned" layout (many  distinct rooms rather than one great room) has been a nice thing to have during this pandemic. None of the rooms are ginormous, but they give us lots of options—the dining room, the music room, the entertainment room, Dad's office, the basement main room, the LEGO room, etc. I think that's helped us not feel so stuck in the house.
Anyway, we gathered around the table for scriptures and prayer. We're on D&C 112.
I read verse 1 and then helped Alexander read verse 2 because it looked pretty short.
"Verily I say unto you, there have been some few things in thine heart and with thee with which I, the Lord, was not well pleased," Alexander said.
"Benjamin!" Zoë said scathingly.
We talked about how she was, perhaps, laying the guilt on a little thick. At some point, if you're not careful, you go from standing up for the underdog to simply being a bully, yourself. After all, no one is perfect and there are things in all of our hearts that are...unpleasant...and displeasing to the Lord.
We also talked about the "Too Soon Principle."
Sometimes we do tease each other about mistakes we've made. Rachel will never live down the fact that she thought Alaska was an island. Not ever. But our teasing must be gentle. And enough time must have passed from the incident that the butt of the joke doesn't feel overly sensitive about the event. The goal is to have everyone laugh together, not have everyone laugh at someone.
In this case, it was too soon to even joke about this evening's incident (not that I think she was joking; I'm fairly sure she was dead serious).
Rachel said, "Yeah, like if someone accidentally cut their finger off and we were trying to rush out the door to the hospital and to get everyone to hurry you called out, 'Chop, chop!' that might not be very funny in the moment. But it might be funny later...oh, who am I kidding? That would also be very funny in the moment."
Sometimes we get a little derailed when we're "studying" the scriptures.
Luckily we had the next few verses to get us back on track. They go like this: "Nevertheless, inasmuch as thou hast abased thyself thou shalt be exalted; therefore, all thy sins are forgiven thee. Let thy heart be of good cheer before my face..."
"Benjamin!" I said scathingly.
Zoë scowled at me.
"Too soon!" everyone chorused.
And then everyone laughed. So I think we're going to be okay. We'll get through the Fairyland Smashing Incident of 2021. And we'll get through the next thing. And then next thing. And the next.
Though my heart does worry about what lies in store for us when our unfortunate incidents are no longer small things like being unpleasant breakfast companions or smashing egg carton crafts.
I worry about the bigger, more complicated stuff of life that's sure to come up.
We'll just have to get through that, too, I guess.
In the meantime, we'll relish the simplicity of life as it is (even though it already feels pretty complicated, if I'm being perfectly honest).
Here's sweet Alexander after he fell asleep on me during reading time this evening: 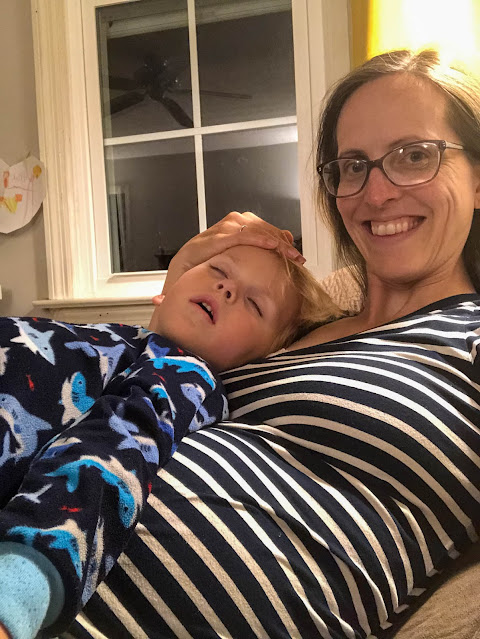 Having his weight press on my belly sure emphasizes Phoebe's growing strength. She didn't seem to love having him there, but his days on my lap are fleeting (not only because there's a new baby coming but also because he's simply growing up), so she'll just have to deal with it.
Andrew came in to cart him off to bed and when he did Alexander sleepily protested, "But we're still reading!"
It was a sweet little protest, but we were finished reading...he'd just slept through the end of the chapter (he often falls asleep during our evening chapter book, which is why we read picturebooks earlier).
And, on a completely unrelated note, here's the sweet boy on our after-dinner walk, holding a fuzzy little caterpillar—an orange-striped oakworm, a sure sign autumn's impending—completely oblivious to the fact that his entire evening will be ruined in about five minutes...when he discovers his fairyland has been smashed... 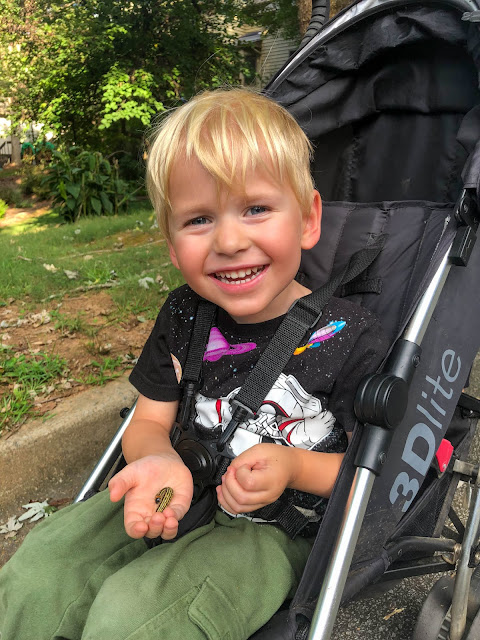